It had been a wonderful weekend. Dorothy had spent the whole time with Mike and Sandy. Most of it had taken place in the master bedroom.

Speaking of the latter, Dorothy also experienced the pleasures of going down on a woman. Then Sandy had returned the favor. Her female-induced orgasms were just as deep and profound as anything she’d experienced with Mike’s cock.

Now the weekend was winding down. Dorothy would soon have to travel back home. But Mike and Sandy had one last surprise in store for her.

She stripped naked and allowed her hands to be tied in front of her waist. Dorothy allowed herself to be blindfolded and her mouth taped closed. Then she was taken to a back room where Mike and Sandy had a studio specially prepared for her. 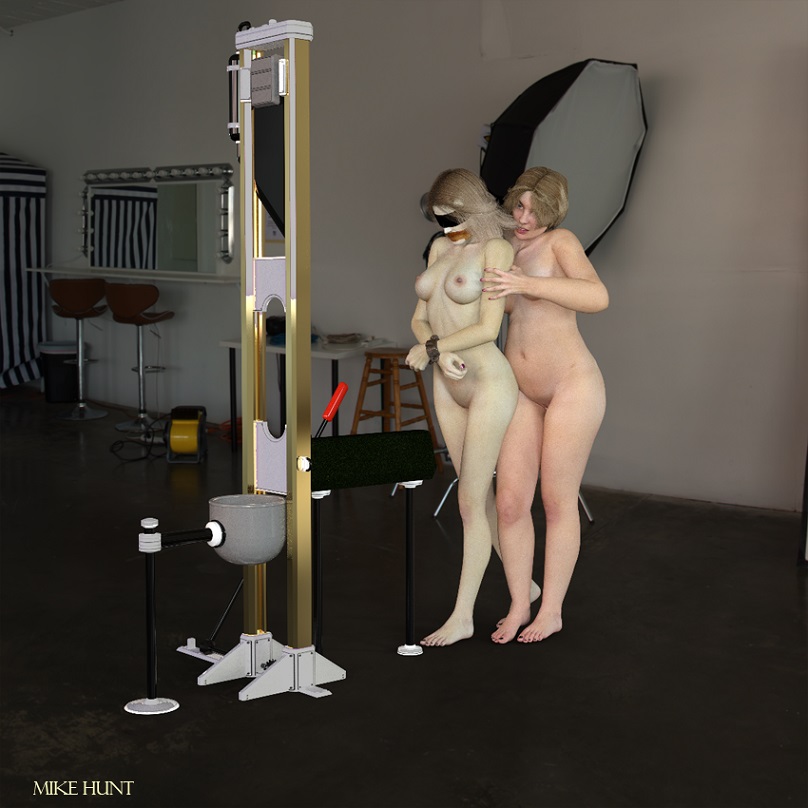 Sandy turned Dorothy around. Then she made her lie back on some sort of upraised bench. It left Dorothy a bit uncomfortable as her back was arched.

She grunted as she tried to adapt to the new position. Her neck felt uncomfortably supported. Dorothy found herself hoping she would get some sort of headrest or she was going to end up straining her neck.

All of the sudden she felt arms wrap around her legs. A moment later she felt a tongue on her lady parts. Dorothy began to whimper through the tape covering her mouth. Bloody hell; was Sandy at it again? That woman sure knew how to give oral pleasure!

Dorothy writhed and whimpered as Sandy tongued her juicy twat. A moment later the tape was pulled off her mouth. That had to be Mike’s doing.

She gasped as she writhed and moaned. She was still bloody uncomfortable. At least Sandy was giving her something to take her mind off her discomfort.

The blindfold suddenly came free. Mike took it and stepped back with a smile. That’s when Dorothy looked up and saw where the hell she was.

“Bloody hell!” she gasped as Sandy’s tongue continued to lick and probe. Her fear and arousal intensified a hundred-fold. All she could focus on was the blade hovering above her.

She couldn’t see what was below her head. So she didn’t see the container that sat waiting to catch her skull. She had no idea there was anything below her. 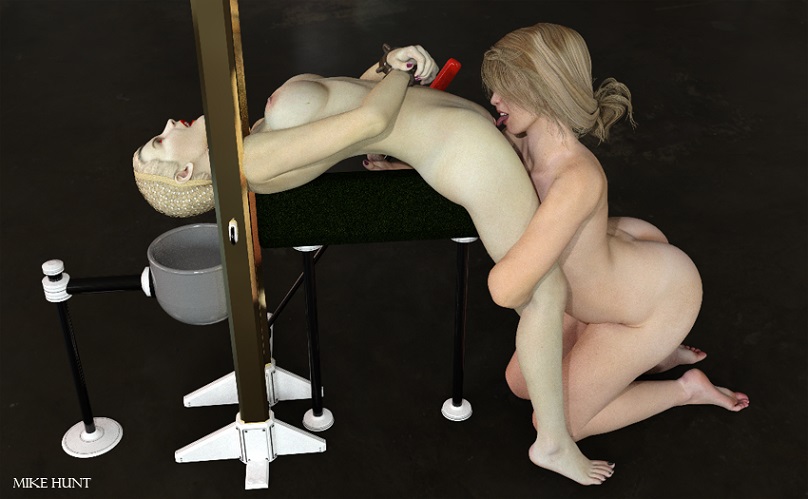 Dorothy tipped her head back. “Mike, is that you?”

“Who else would it be?” he replied with a chuckle. 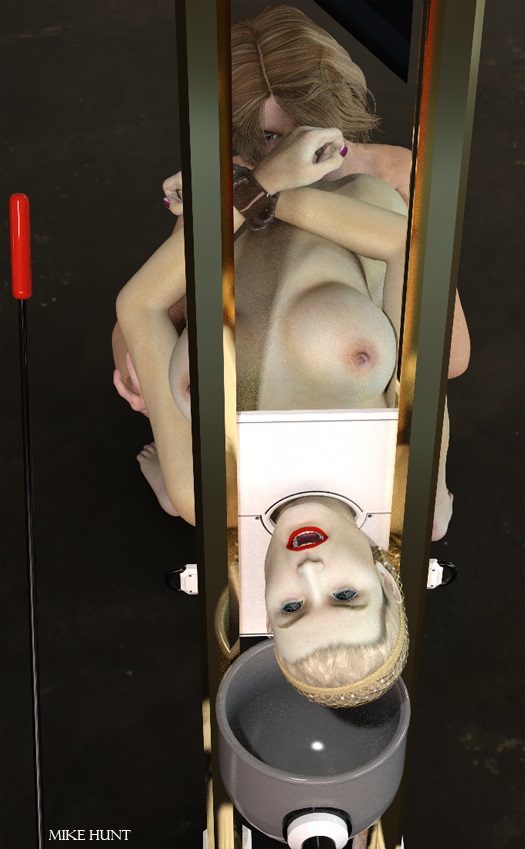 “What’s the matter?” Mike wanted to know. “Do you need a little distraction?”

Dorothy wondered what the hell he was talking about. Then he stepped into her line of sight. Right away she noticed he was naked.

She saw something tantalizing dangle from his waste. Instinctively her mouth started to water. If she wanted to think about something other than the blade above, Mike sure was making a tempting offer.

He stepped forward until his dick was within reach. Instinctively Dorothy latched onto it with her lips. She began sucking and moaning as Sandy continued eating her out.

It was a scene that had played out many times before. Dorothy had sucked Mike’s cock while Sandy had nibbled on her lady parts. But with her head locked into their guillotine, she didn’t know whether to be terrified or unbelievably aroused.

“She can’t get enough of your cock, darling,” Sandy observed with a smile.

“What can I say?” he replied, his hands raised in triumph. “She loves it.”

“I’m glad she does,” Sandy said as she grabbed the lever to the guillotine. “Especially since it’s going to be the last cock she ever tastes.” Then she went back to licking and slurping. 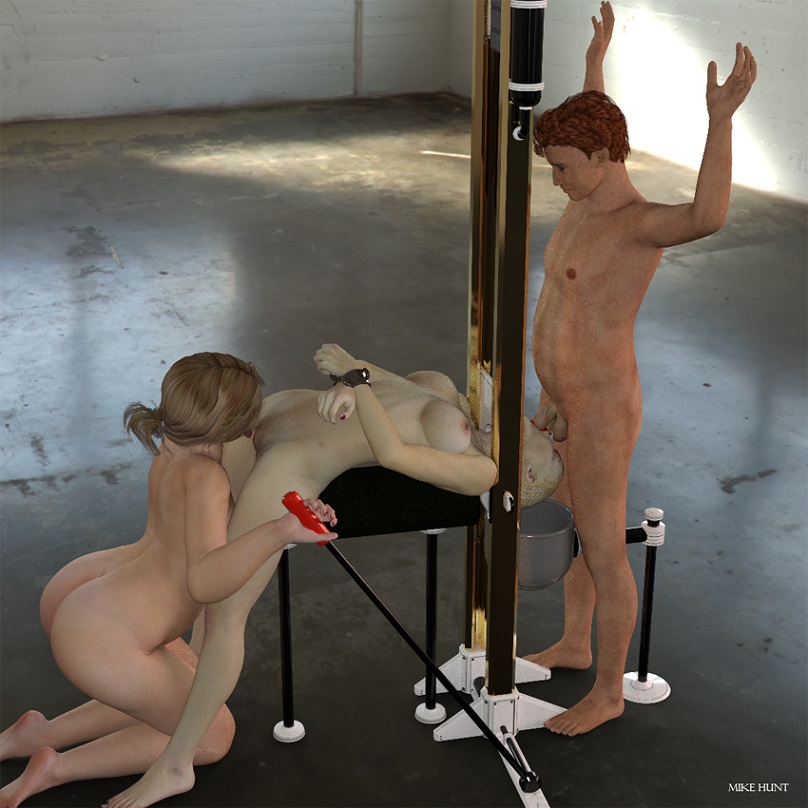 Were they really going to behead her?? Dorothy had no idea. But she couldn’t believe how terribly excited she had become.

She threw herself into sucking Mike’s cock. She closed her eyes, not wanting to witness the blade come crashing down. It would only have terrified her even more.

She writhed and grunted as Sandy kept licking pleasure into her womanhood. Was this how she was going to exit this world? Dorothy felt it swell within her as she hungrily gobbled down Mike’s cock. 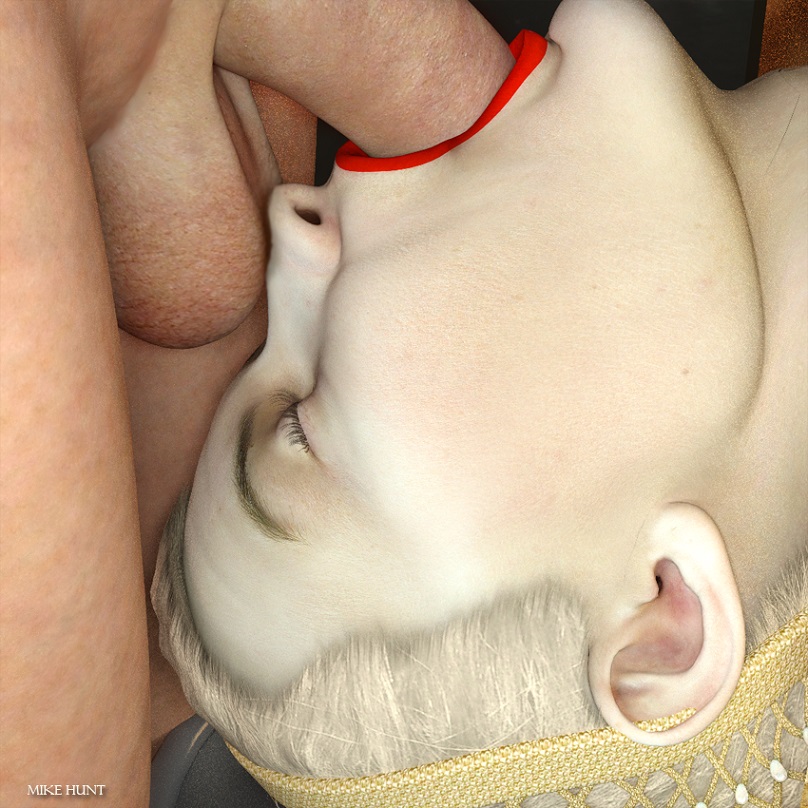 “Good thinking.” And with that Sandy pulled the lever.

Dorothy was just starting to feel her orgasm crest when she felt the guillotine shudder. She started to scream, but a sharp pain sliced right through her neck. Then she lost Mike’s cock out of her mouth.

For a minute she felt disoriented. Then it felt like she was airborne. A moment later she felt Mike’s tasty member slip back between her lips.

“Damn!” Mike observed as he thrust hard into her severed skull. “If anything, she’d sucking me even harder.”

Sandy came up for a moment, her face soaked. “The bitch just squirted all over me.” Then she went back to feasting. She was all turned on the way Dorothy’s naked body was hitching and jerking in its orgasmic death throes. 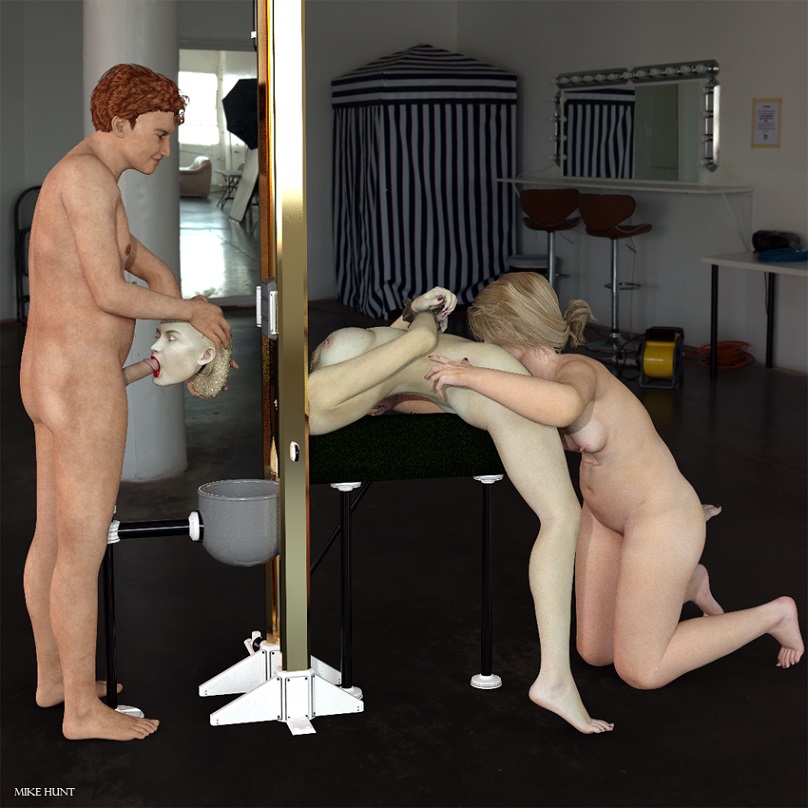 “Darling, I’m about to blast off here,” Mike warned.

“Then put her head down and bring your cock back here.”

Mike dropped Dorothy’s head into the container attached to the guillotine. He stepped around and saw Dorothy’s wet, winking pussy. He gave it several hard, deep thrusts, enjoying the way Dorothy’s dying pussy was clenching around his manhood.

“Wrong bitch, darling,” Sandy said as she pulled him out of Dorothy’s cunt. Then she began sucking and slobbering all over his throbbing meat.

Mike began to gasp with pleasure. Sandy took his cock out of her mouth. Then she allowed him to splatter her face with his baby batter. 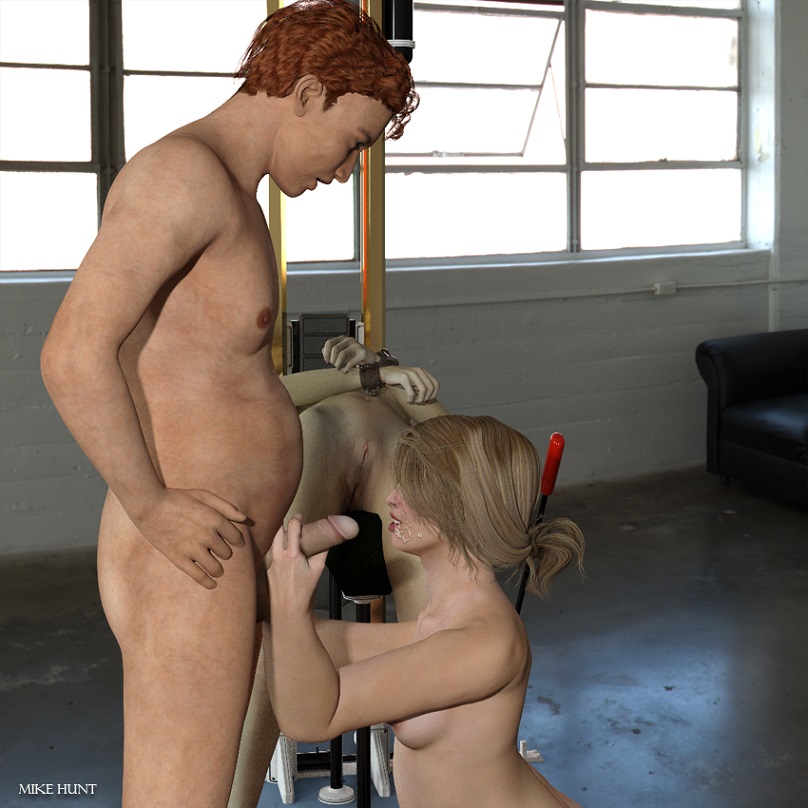 “What do we do about… that?” he asked, pointing at the still quivering corpse.

“We have fun with it; that’s what we do.” Then Sandy dove back into Dorothy’s dead cunt, licking and slurping up all those dripping fluids.

Several weeks later Emma looked at her aunt’s head on display in a glass case. She studied it with great curiosity. Her Aunt Dorothy had a strange look of bliss frozen on her face. 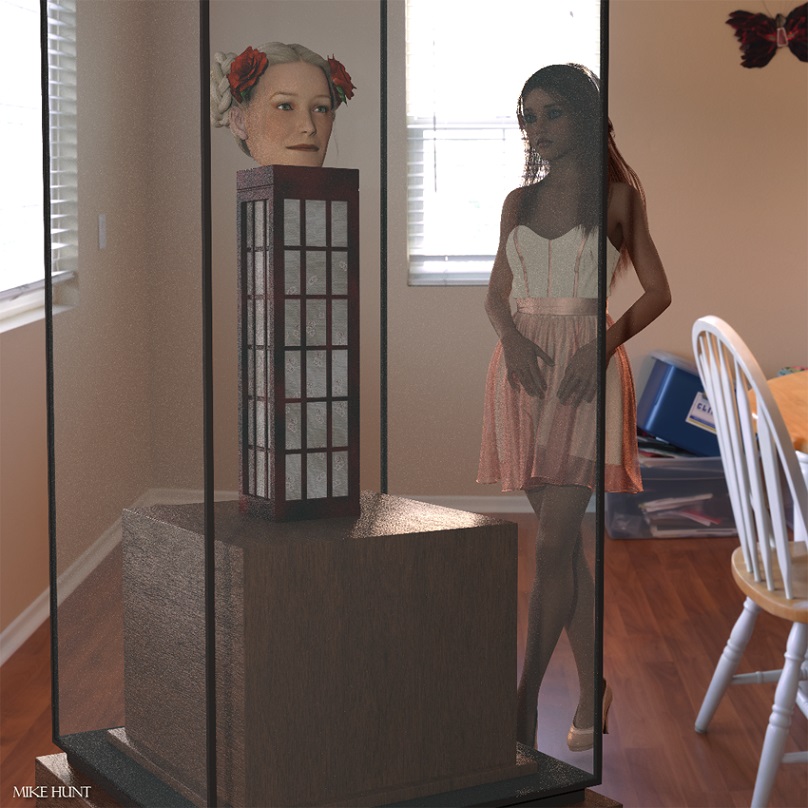 She walked all around the case, trying to understand. Her aunt had gone away for a weekend, only for her head to return. So her mother had taken it and put it in a case on display.

Emma walked all around, trying to understand. For some reason her aunt seemed even more lovely now. What’s more, she would never age.

What had she thought about during those last moments? What went through her mind when the blade fell? What was happening to her the moment she lost her head?

Mother hadn’t given her too many details. But Emma was still curious. What had her aunt experienced the moment the blade had fallen?

Emma felt a strange wetness down below as she looked at her aunt’s head. Why was she so excited? Maybe one day she would have to have a look at the guillotine that had taken her aunt’s life. Maybe then she would have a better understanding of just what had happened. 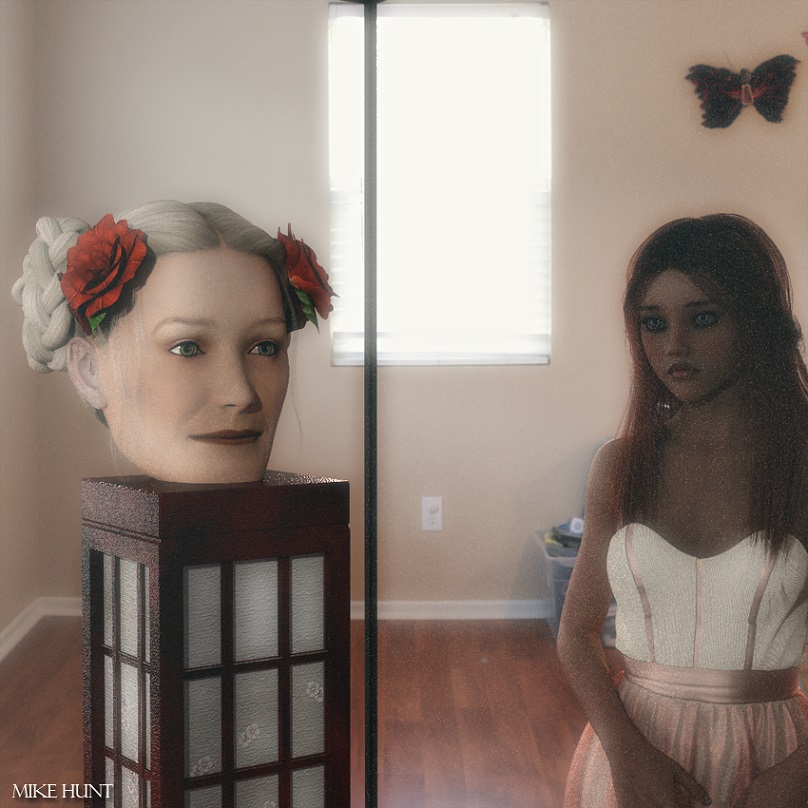 This entry was posted in Beheading Stories, Dorothy and her friends, Picture Stories and tagged beheading, nudity, oral sex, pictures. Bookmark the permalink.