They were searching the countryside for a Union soldier suspected of having been wounded in a recent battle. Reports had filtered in indicating he was trying to make his way north. There was concern he might be a spy. Then the sightings stopped. An intense search was initiated in the area of the last known sighting.

On the Tucker farm not too far away Gwendoline peeked out of the potato cellar at the movement of the men approaching her parent’s property. Her father was off to fight and had not been heard from since. Her mother ran things with an iron hand, mostly because it had been forced upon her.

The daughter had been hiding the Union soldier for several days, sneaking food out to him every chance she got. She’d also done her best to nurse the man’s wounds. But during the last few days she’d found herself falling in love with him.

Gwendoline was the one who went to the potato cellar whenever her mother needed any of the supplies stored there. As long as she went by herself, the soldier was safe. She’d not told anyone of his presence, hoping he would heal soon enough to continue his journey northward.

She ducked back inside and told him of the approaching soldiers. He said it was dangerous for him to remain on their property. Gwendoline assured him she would sneak him away once the sun went down. Then she would see him safely on his way while her mother was fast asleep.

Gwendoline climbed out of the potato cellar and returned to the house. Her mother looked out the window. “Soldiers are comin’. Fetch some vegetables from the cellar. We must make sure they’re well fed.”

“Yes, mother,” she said. Then she headed back out to the potato cellar. She stole another kiss from the wounded man before taking onions and potatoes back into the house.

“That’s not enough,” her mother scolded when she looked at what had been brought inside. “Run down the road and fetch some flour from the Grandy spread. Tell ‘em we’ll be having some of our boys over for dinner.”

Gwendoline hesitated. She wanted to remain in case the Union soldier might need her help. Her mother scowled at her.

“Gwendoline, is there a problem?”

Gwendoline headed out back toward the Grandy place. It was only a mile down the lane. Before the war the households had often helped each other out. Only the women remained, but that Southern generosity was still in operation.

Gwendoline arrived, only for Mrs. Grandy to urge her to have a seat. She was given a glass of lemonade. Then one of the Grandy daughters was sent to fetch the needed flour.

Gwendoline fidgeted as she waited for the daughter to return. She was worried about the soldier hidden in their potato cellar. What if the soldiers found him? What would happen to him then? Was there anything she could to do help him should his location be revealed?

The daughter finally returned with the flour. A container was produced to carry it back home. Gwendoline quickly finished her lemonade, anxious to get home.

“Thank you for the hospitality, Mrs. Grandy.”

“Anything for a Tucker, my child.”

“Have you heard from your husband Seth or your son Thomas?”

“Not a peep, child? What about your father?” Gwendoline shook her head.

“You best be running along, child. Your mother needs to treat our boys right.”

Gwendoline took the flour and headed back up the lane. But the closer she got, the more anxious she became. What if those soldiers had discovered that wounded soldier she was hiding and was desperately in love with?

She was less than a hundred yards from the back of the property when she heard a loud male voice proclaim, “READY… AIM… FIRE!” There was a volley of shots. Gwendoline screamed in horror.

She dropped the four and ran as fast as she could despite the flowing dress she was wearing. She was rounding the corner when she heard a single shot. Fear gripped her heart.

When she came into view she caught sight of a squad of soldiers. A body was lying dead on the ground in front of a tree. Several of the soldiers had spades in their hands and were digging.

She let out a cry when she saw the body was that of the wounded Union soldier. “NOOOO!” Then she rushed to be by his side.

Her mother appeared from out of nowhere and stopped her, grabbing her by the arm.  “Gwendoline, is this your doing?”

“Mother, he was injured! Was it not our Christian duty to take care of an injured man?”

“He was an enemy soldier! You hid him in our potato cellar??”

“Mother, he was injured!” Now the tears were streaming down her cheeks.

“Ungrateful child!” and her mother slapped her hard. “You’ve shamed me in front of these boys here! Lieutenant?”

An officer came over. The mother pointed at a small sapling. “Right there will do. My property is on the other side of that path. I will not stand to have the blood of this spoiled child spilled on Randolph Jameson Tucker’s land and despoil his good name!”

The lieutenant snapped his fingers. Two soldiers came and took Gwendoline over to the sapling. They tied her wrists behind it as the daughter stared in horror.

“You humiliated me, child, and I’ll not stand for it! It’s a good thing I went to get more potatoes or we might not have found him!”

“Mother, this is your fault? You turned him over to these soldiers??”

“What else was I supposed to do, you ungrateful cur!”

“Officer, do your duty!”

The lieutenant looked at the mother and nodded. He snapped his fingers again. Several soldiers gathered and stood in a line.

Gwendoline began to pant anxiously for breath. “Mother, you’re not going to let them do this to me, are you??” Her mother snorted as she turned her back on her.

Gwendoline stared at the soldiers in horror as they prepared to do their duty. Then she turned to look at the Union man lying dead on the ground. That’s when she noticed two graves were being dug. Had her mother planned on her execution all along??

“MOTHER??” and her heart began to race. The officer looked at her mother for confirmation. “DO IT!” the angry woman snapped back, refusing to watch.

He nodded as he turned to the men standing in line. “READY?” The rifles came up. “AIM?” The rifles zeroed in.

Gwendoline stared in horror. There was not the slightest hint of mercy in the face of any of the men aiming at her.

She opened her mouth to scream. “FIRE!” There was a volley as several puffs of smoke issued from each barrel.

Gwendoline slumped forward, her dress perforated by little Minnie balls. The lieutenant prepared his pistol for the final shot. The mother saw the revolver in his hand, saw what he was about to do and snatched it away from him.

Gwendoline was barely breathing, her heart starting to slow. She heard footsteps in the grass. She did not have the strength to look up.

Her mother aimed the pistol at her head. “Ungrateful child! This is for victory for the South!” Then she pulled the trigger. 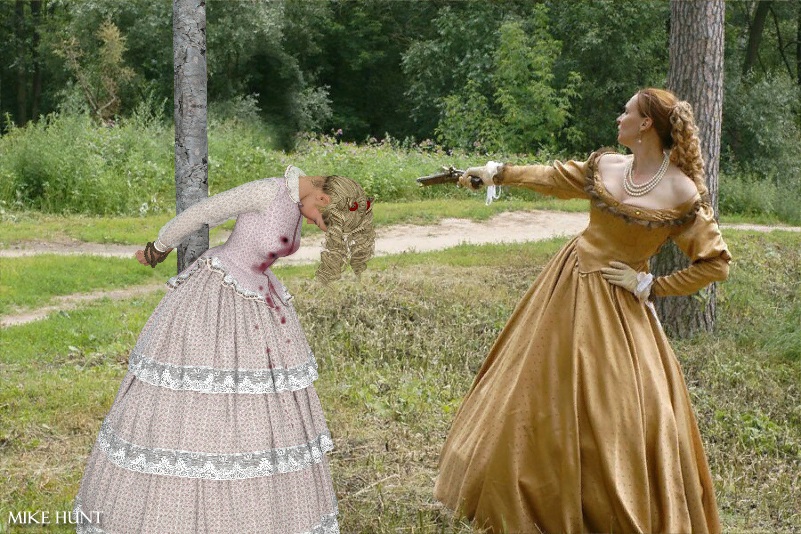 The gun went off. The slug penetrated Gwendoline’s head and came out her upper back, severing her spine. Now she was reunited in death with her wounded Union soldier.

“Bury ‘em!” she instructed the Lieutenant. “Afterwards I’d be honored if you and your men would join me for the evening meal.”

The graves were finished, the daughter and soldier unceremoniously thrown in. Then earth was thrown in on top of them. The sun was just going down when the soldiers finished and went inside for a nice, home-cooked meal…

(Inspired by his render.)

This entry was posted in Uncategorized. Bookmark the permalink.