Witnessing a quickie in the pool

I was at my computer desk surfing the Internet when I heard giggles and laughter outside my open second story window. I looked down into the courtyard and saw a young couple in the pool. Some guy had submerged and looked like he was between some girl’s legs, causing her to giggle and back away.

I couldn’t help watching them in the pool. I wondered if they were up to something sexual. I tried not to be noticeable looking out my window.

I saw him go under and swim toward her legs several times. It made her giggle each time he burst up. Then she wrapped her arms around his neck.

“Kiss me underwater,” I heard him say to her.

“But I don’t want to get my hair wet!” she protested with another giggle.

“You’re in the pool; you’re going to get it wet anyway. Now come underwater and kiss me. You can hold your breath for a few seconds, can’t you?”

“Of course I can!” was the indignant reply.

I heard her take a deep breath. He went under with her arms wrapped around his neck. It looked like he pulled her down with him.

There was an explosion of bubbles. The water was clear enough that I could see them. They were under several seconds before they burst up together.

She giggled before blurting out, “Kiss me underwater again!”

They inhaled loudly. Then they started to kiss each other as they submerged. Once again I saw a flurry of bubbles come up.

They were down longer before I saw what looked like her bikini top coming loose. There was an eruption of bubbles as they came up together. “HEY!” she protested with a giggle.

“So what?” he replied, looking all around. “We have the pool all to ourselves. No one’s watching.”

They both submerged again. The next thing I saw was his head between her breasts. More bubbles came up.

They surfaced a few seconds later. She sounded breathless as she laughed, “So you like my tits?” She sounded amused.

“That’s not all I like” was his reply. Then he took a deep breath and submerged.

It looked like his head was down near her crotch. I saw more bubbles come up. She tipped her head back and I thought I heard her gasp, “Oh fuck!”

He finally came up, panting heavily. She wrapped her arms around him again. I heard her tell him, “I liked that!”

They both inhaled and submerged again. It looked like they were kissing each other. There were more bubbles.

It looked like there was some sort of activity taking place under the surface. But from my second floor window I couldn’t really tell. Then they came back up for air.

I heard her proclaim, “Fuck; you’ve got me naked!”

“So what?” he told her. Then he took another deep breath before he went back down.

Once more it looked like his head was down near her crotch. Her head tipped back and I heard her gasp, “Oh fuck; I like that!” Then she took a deep breath.

She submerged, pulling him onto her. I think they were kissing again. After a while they came back up.

I saw them hugging each other. It looked like she might have been humping him or something. That’s when I heard her giggle, “You’re getting hard!”

“What did you expect?” he replied. She giggled again in reply.

She told him, “I think I’m getting better at holding my breath. Let’s see if I can do something about that!” Then I heard her gasp before she submerged in a flurry of bubbles.

It looked to me like she’d reached out and was pulling his swim trunks down. She looked like she was pulling on something. It wasn’t long before I saw his trunks floating in the water. 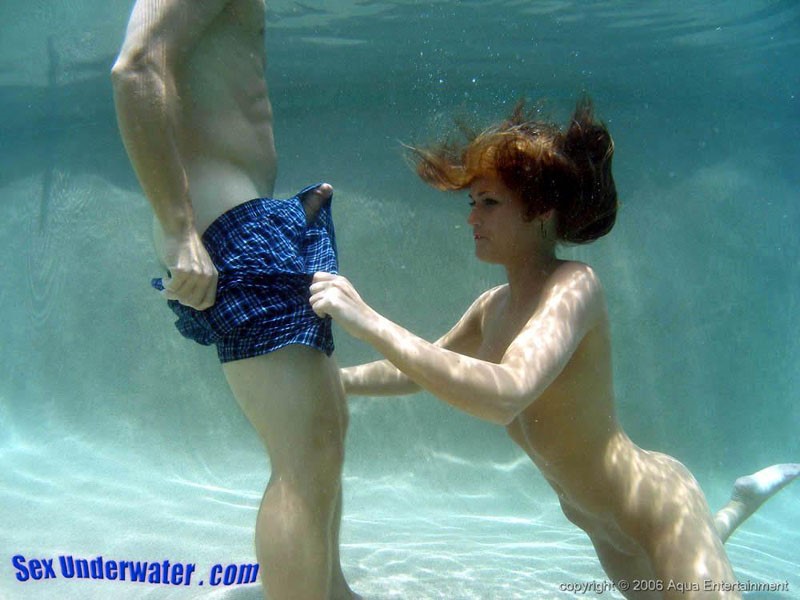 She got really close. I think that’s when she took him into her mouth. The next thing I saw was more bubbles.

She came back up and looked all around before giggling, “How was that?”

“That was fucking fantastic!” he gasped. She just giggled again before inhaling deeply and then submerging.

I didn’t have the clearest view. But it sure looked like she was blowing him. He was looking down at her appreciatively, pushing down with his hand.

Her naked body was all stretched out. It looked like she was hanging onto to him as she was blowing him. More bubbles came up, and I heard him gasp, “Fuck – fuck – fuck!” 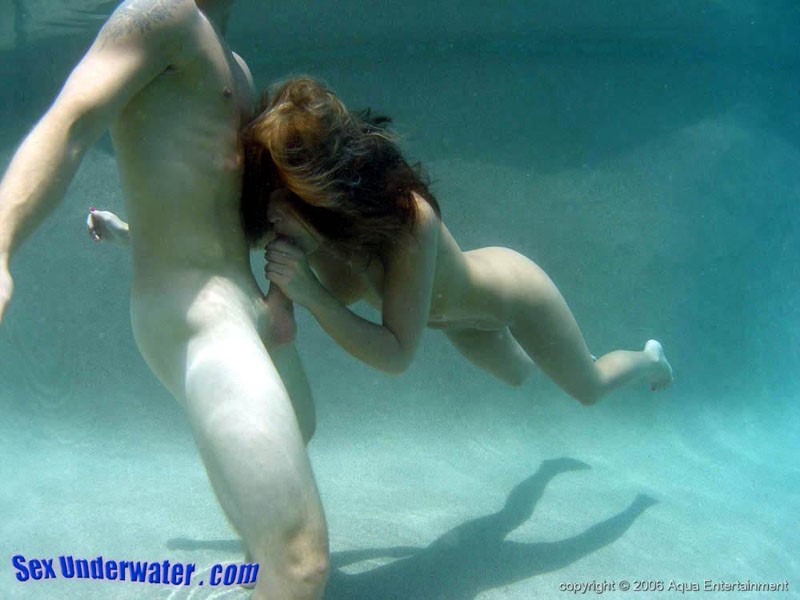 She suddenly came back up and looked all around. I thought I heard her ask him if he wanted to stick it in her. Then she turned with her hands on the side of the pool as he came up behind her.

It looked like he started fucking her right there against the side of the pool. I could hear them both grunting. I heard her blurt out, “That’s it – that’s the spot! Fuck; don’t stop!”

He responded, “I thought you didn’t want to get your hair wet.”

“Too late for that,” she giggled as she cozied up to him.

I wasn’t entirely sure. But it looked like she climbing into his lap. “Oh, fuck!” he gasped again.

They both inhaled loud and deep. Then they started kissing each other as they submerged. It certainly looked like she was in his lap riding him.

Bubbles came up until it looked like there was a lot of activity underwater. I think they were humping each other. What I couldn’t see clearly, my mind filled in the rest.

I couldn’t take my eyes off them as they went at it good and heavy underwater. Then they both burst up gasping loudly for breath. I heard him pant, “I’m almost there!”

They both inhaled deeply before slipping under the surface again. They really set the surface of the pool to rippling and undulating as they went at it underwater. My cock was really straining in my pants.

There was a sudden eruption of bubbles. It looked like he was really humping or thrusting or something. Then I thought I heard a bubbly scream.

She tipped her head back while she was underwater. Or maybe I just imagined it. Then a big burst of bubbles came up.

They both finally shot up, panting heavily for breath. It looked like they were kissing each other. Then her head suddenly jerked around.

She blurted out, “Did you hear that? I think I hear some kids coming!”

He turned to look. Then I heard his anxious voice reply, “Fuck! We’ve got to get dressed and get out of here!”

“Where’s my suit?” she asked anxiously, looking all around.

They both jack-knifed downward. I saws them swim toward the bottom before turning and coming back up. They both had their suits in their hands.

They scrambled to put their swim suits back on. I saw them disappear behind some hedges where I couldn’t see them. A few moments later I heard the sound of the metal gate.

I caught them both sneaking away. They had towels wrapped around their waists. And just like that I’d witnessed a quickie in the pool…

(Pictures are from Sexunderwater.com and are for illustration purposes only.)