Hayley was a pureblood aquaphile. The only way she could orgasm was when she was underwater holding her breath.

She learned this at an early age. When she was a teenager she would take baths, submerging herself and holding her breath. Her very first orgasm struck without warning.

On that evening she kept going under while holding her breath in the tub. Her pussy tingled each time she would try to hold her breath longer. On her last breath-hold she stayed submerged until her lungs were on fire, her chest heaving.

It struck without warning. Hayley shuddered hard in orgasm as she spewed the last of her breath away. She was barely able to get her head back up to catch her breath.

She took more baths after that. Every bath involved some element of going under and holding her breath. And each time she experienced the pleasure of a breathless orgasm.

Many times she did not even have to touch her crotch while she was underwater holding her breath. Hayley would lie on the bottom of a pool and caress herself all over until she was running out of air. The sensation of breathlessness in an underwater environment usually did the trick.

Hayley married a thirty year old man moving up in a major company. As a result, they bought a house with a backyard pool. For Hayley it was a necessity, resulting in many happy hours underwater.

She tried to be a good wife. Her husband responded by having sex with her in the pool. Being fucked underwater while holding her breath resulted in some of her best orgasms.

Hayley and her husband lived in a northern city. That meant she could not use their pool until summer. She requested a move to a warmer climate, but her husband was needed where they were. However he did resolve to put in a transfer to a southern location.

As the temperatures increased, the pool was cleaned and then filled with water. Hayley always got excited as she looked forward to her first swim. Then the weather changed for the worse.

There were several weeks of below average temperatures. Hayley fumed as she waited for the weather to warm back up. She desperately wanted to get into their backyard pool for a much-needed swim.

In late April there was a warming trend. Temperatures rose to above average. Hayley eagerly prepared for her first swim of the summer season. Then her husband had to travel out of town for several days on business.

She wanted her first swim to occur when he was present and could fuck her underwater. But now that wasn’t possible. Hayley became impatient.

The temperature was supposed to reach 81. The water would still be a little chilly. But Hayley couldn’t wait any longer. The bathtub worked in a pinch, but she wanted total freedom of movement. That could only occur at the bottom of their spacious pool.

At 11am Hayley eagerly went into their back yard. Then she deliberately stripped out of all her clothes. She was aroused and trembling as she looked with longing at the calm surface of their pool.

Hayley went right to the deep end. Then she eagerly dove into the water with her arms outstretched. The shock of cool water enveloping her trembling, naked body was almost enough to set her off.

She swam around, frequently submerging to move along the bottom. She was becoming more aroused by the minute. And she was becoming acclimatized to the water temperature.

Up at the surface Hayley inhaled deeply. Then she submerged to the pool floor in the deep end. She rolled onto her back and began caressing herself all over. It felt wonderful; winter had been much too long! 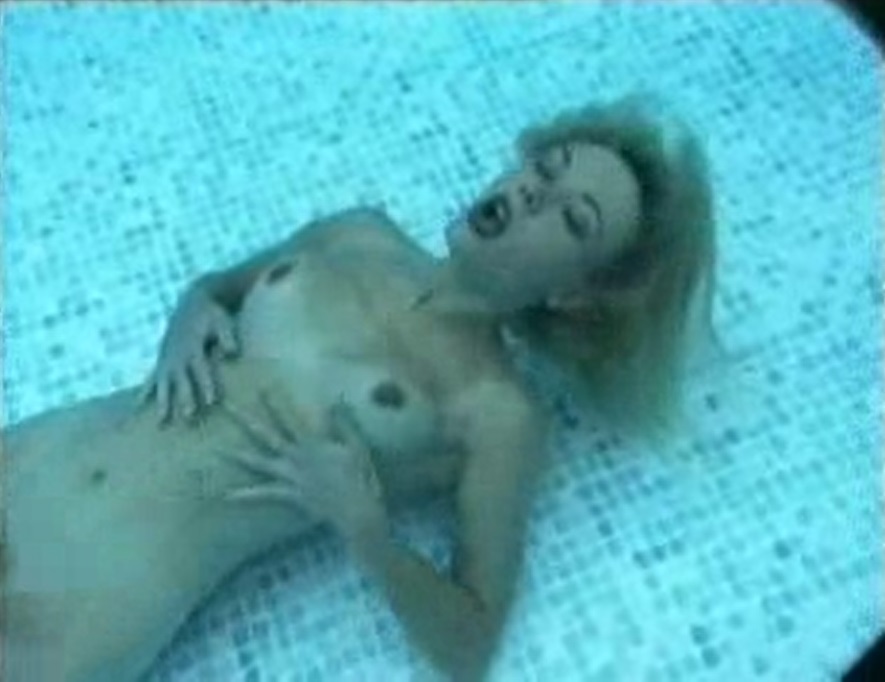 She couldn’t believe how aroused she was. It had been so long since she’d been in a pool. The last time had been back in January when she and her husband had spent the night in a motel with an indoor pool.

Hayley rubbed and touched herself all over. But she avoided any contact with her crotch. She wanted to tease herself until she could build up toward an explosion of pleasure.

She stayed down for as long as she could. The cooler water made it a challenge. Hayley surfaced and gasped for breath, eager to return to the depths and the orgasm she craved.

She filled her lungs and then went back down. Once more she stretched out flat on her back on the pool floor. She rubbed her breasts as she tipped her head back, enjoying the pleasurable sensations. 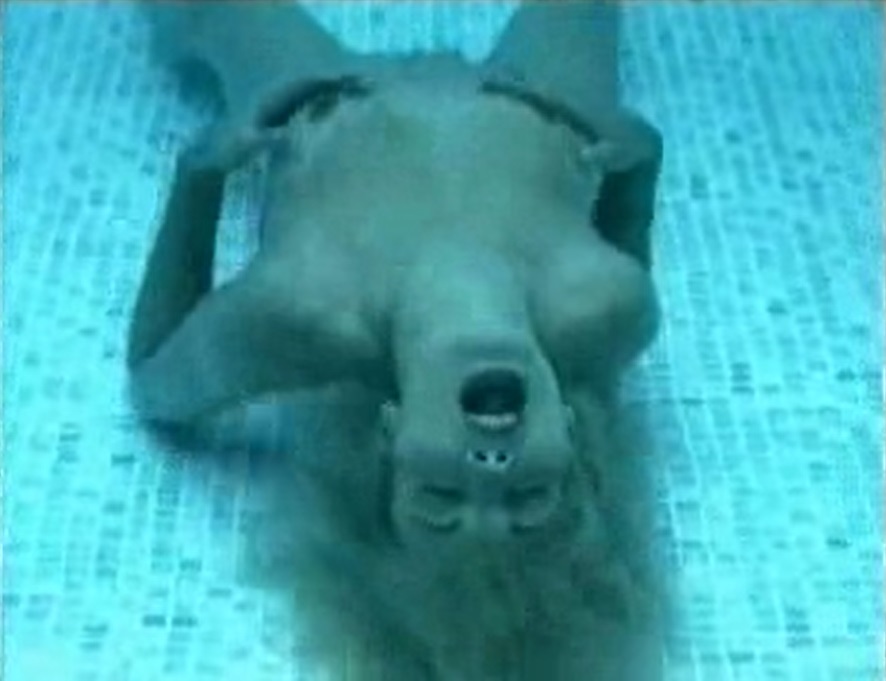 It felt wonderful; it had been so long. Hayley writhed and squirmed with pleasure. She simply could not help herself.

She wriggled around as she reveled in the glorious sensations. Her body tingled with excitement. Her lungs heaved gently as she held her breath, adding to the thrill of being submerged.

It was too bad her husband was not there. She could have used a good, hard underwater fuck. Hayley couldn’t wait until he got home so she could jump his bones in the pool.

She was forced to surface again. Her lungs were heaving; she’d really pushed herself. She could tell she was getting closer to that pleasurable eruption.

Hayley surfaced and gasped for breath. She inhaled deeply, wanting to stay down longer. Heaving lungs would result in a massive orgasm, the kind she was craving right about now.

She filled her lungs and then swam to the bottom. Hayley rolled over onto her back and started rubbing herself all over again. It felt incredible.

She writhed and bubbled as she arched her back. She caressed and fondled herself as the sensations swelled within her. This one was going to be massive.

Her hair flowed all about her head as she wriggled and twisted from side to side. Her body had finally adjusted to the coolness of the water. She decided she would have to experience more than one climax before her underwater session was over. 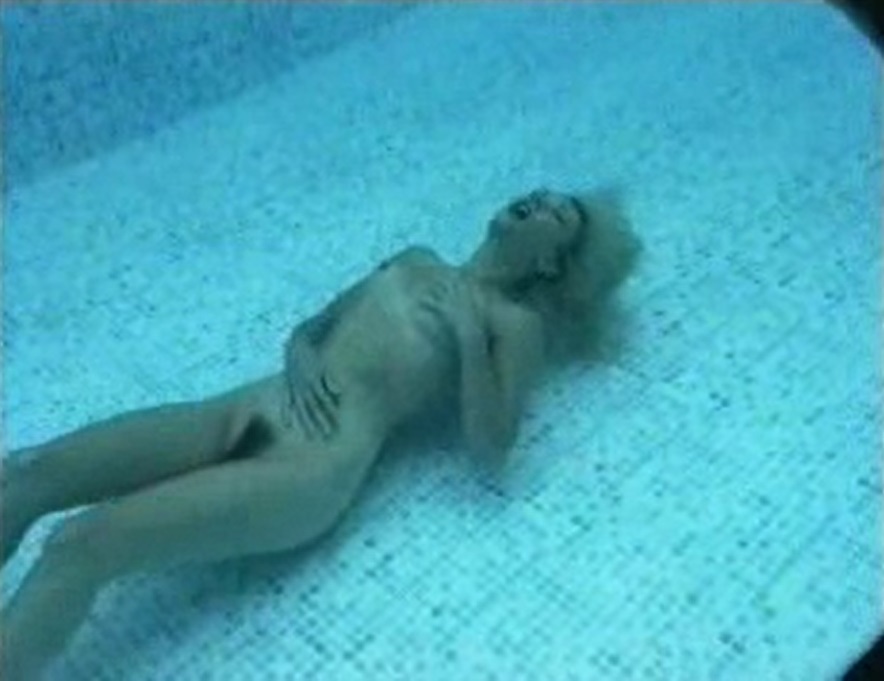 She slipped her arms behind her back as she arched her back. If only her husband were here to fuck her now. She was so aroused she could almost feel him entering her. 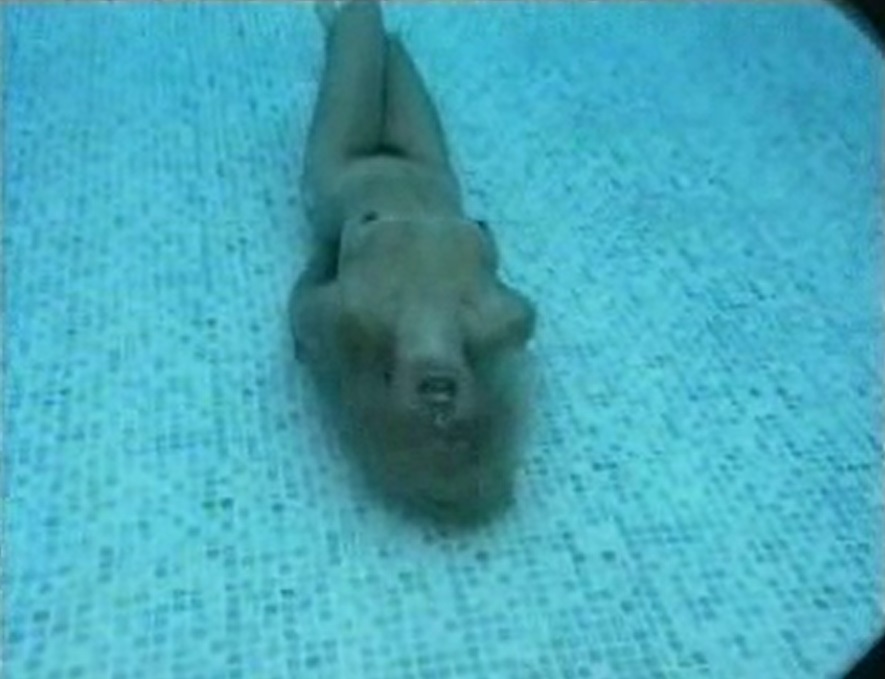 Hayley lifted her head up as she groped and fondled her breasts. She wriggled and squirmed as though she could not contain herself. She lost a few bubbles as she groaned with ecstasy. 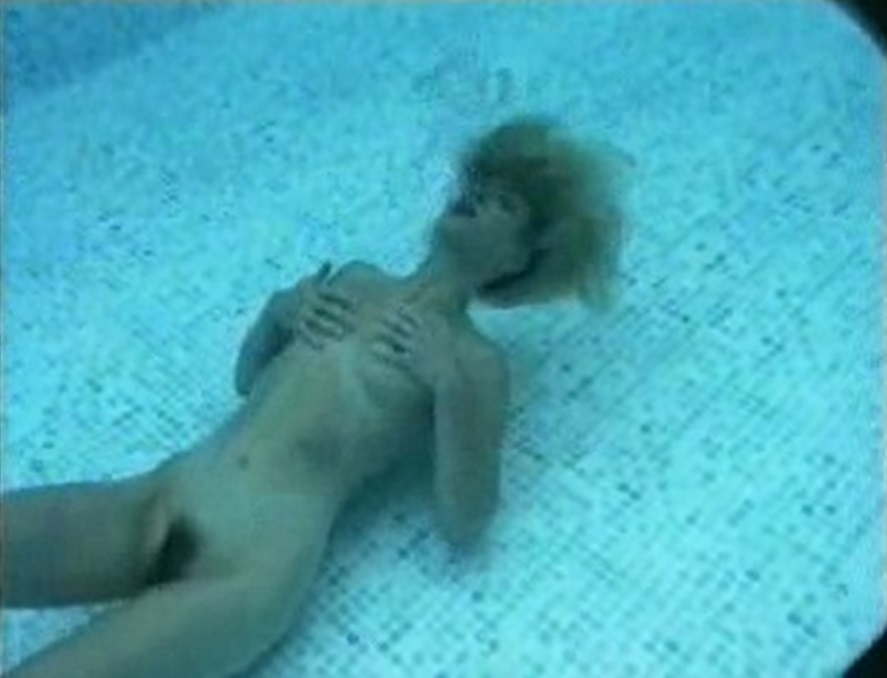 Hayley reached down close to her crotch. She was tingling like crazy. She had to ease off or she would have exploded right then and there. 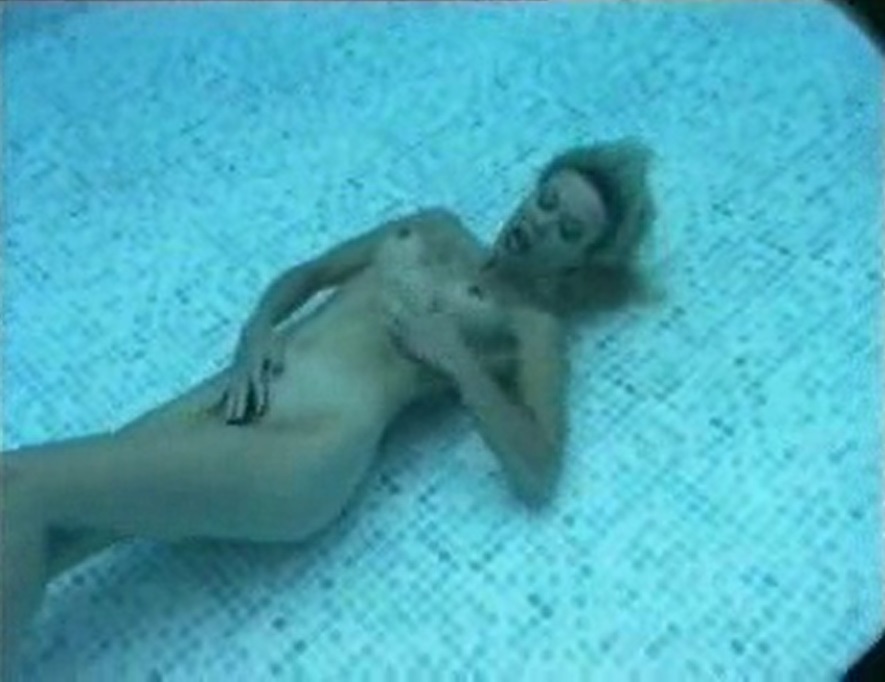 She was running out of breath; she was almost there. Hayley pushed her breath-holding limits. She wanted to be almost out of air when it hit. 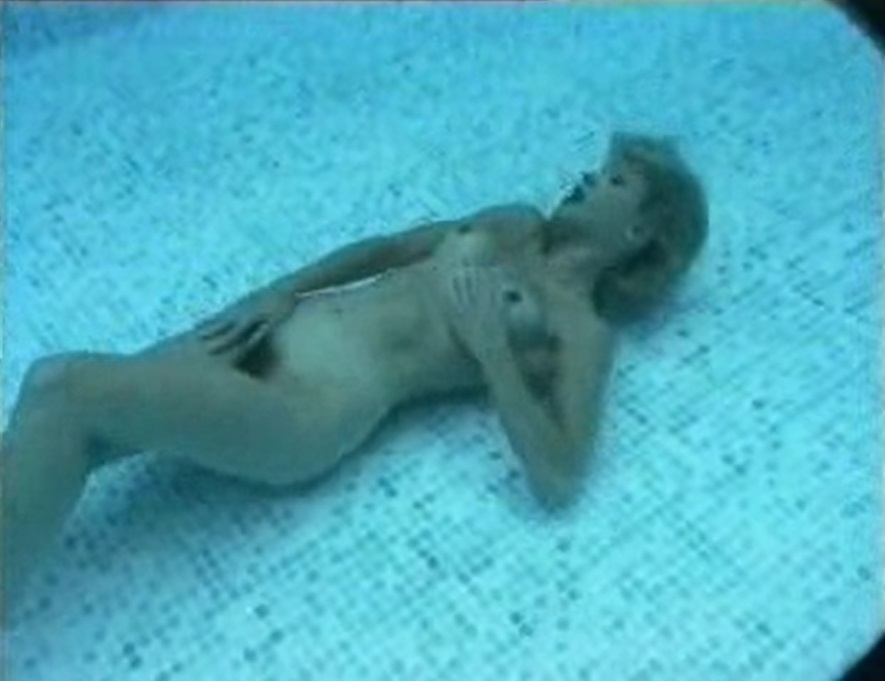 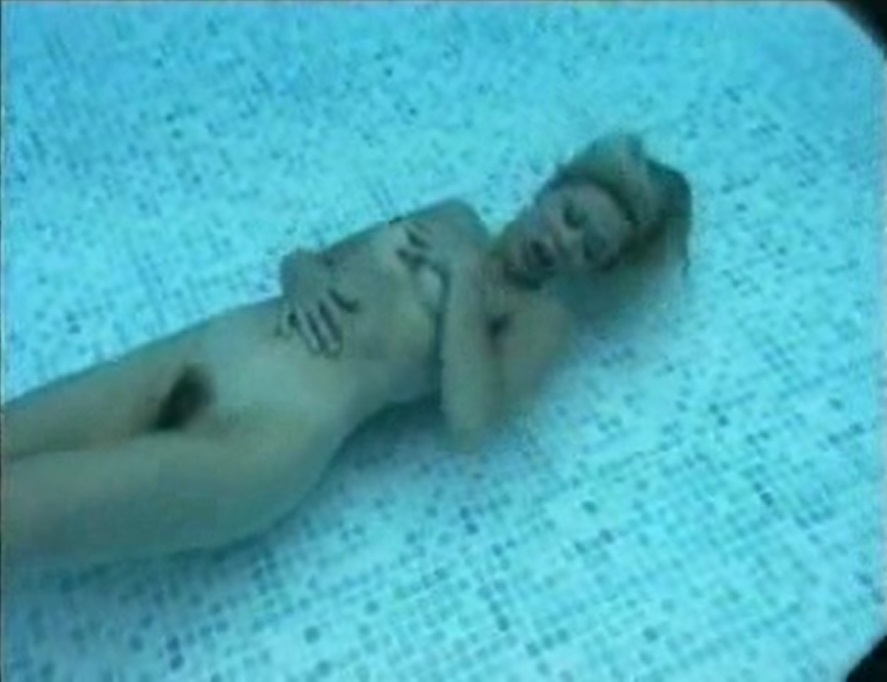 Ohgawd – ohgawd – fuck-fuck-fuck – IT’S HERE! Hayley winced and shuddered as she spewed her breath away. It was so massive that it totally blotted out her senses.

Hayley was aware of nothing but an intense surge of pleasure. It was so overwhelming it almost seemed too much. Hayley’s lungs were on fire, yet she didn’t want to surface. She wanted to stay down and luxuriate in the sensations.

She winced and grunted as s second more devastating orgasm overwhelmed her. She shuddered hard as pleasure flowed hotly through her body. Her nipples were so erect that they actually hurt.

Hayley had no idea when her lungs gave out. One second she was shuddering in orgasm. The next she was hitching and gurgling, her back arched in agony.

She tried to flail for the surface. But she couldn’t seem to make her arms move. Her lungs were empty; it felt like she weighed a ton.

She went into little seizures as she coughed up bubbles. Her back continued to arch as her arms stretched out on the pool bottom. Her palms were flat as though she was trying to grab onto something to ease the sweet agony of her deadly surrender. 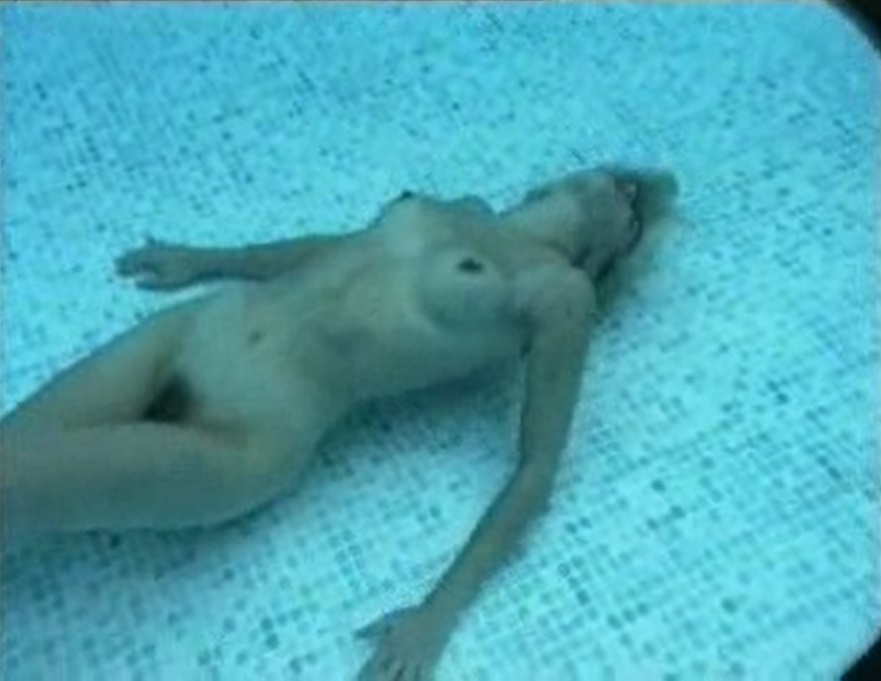 The sensations lessened. There was a heaviness in her chest. But her naked body thrummed with sexual aftershocks.

She tried to breathe, but couldn’t. Her lungs hurt like hell. It felt like something heavy was lying flat on her chest.

Haley hitched as she shuddered and gurgled. A few solitary bubbles slipped out past her parted lips. She stared upward in astonishment. Then a look of pleasure filled her features as the life winked out of her eyes.

(Inspired by vidcaps I made from a clip I found.)