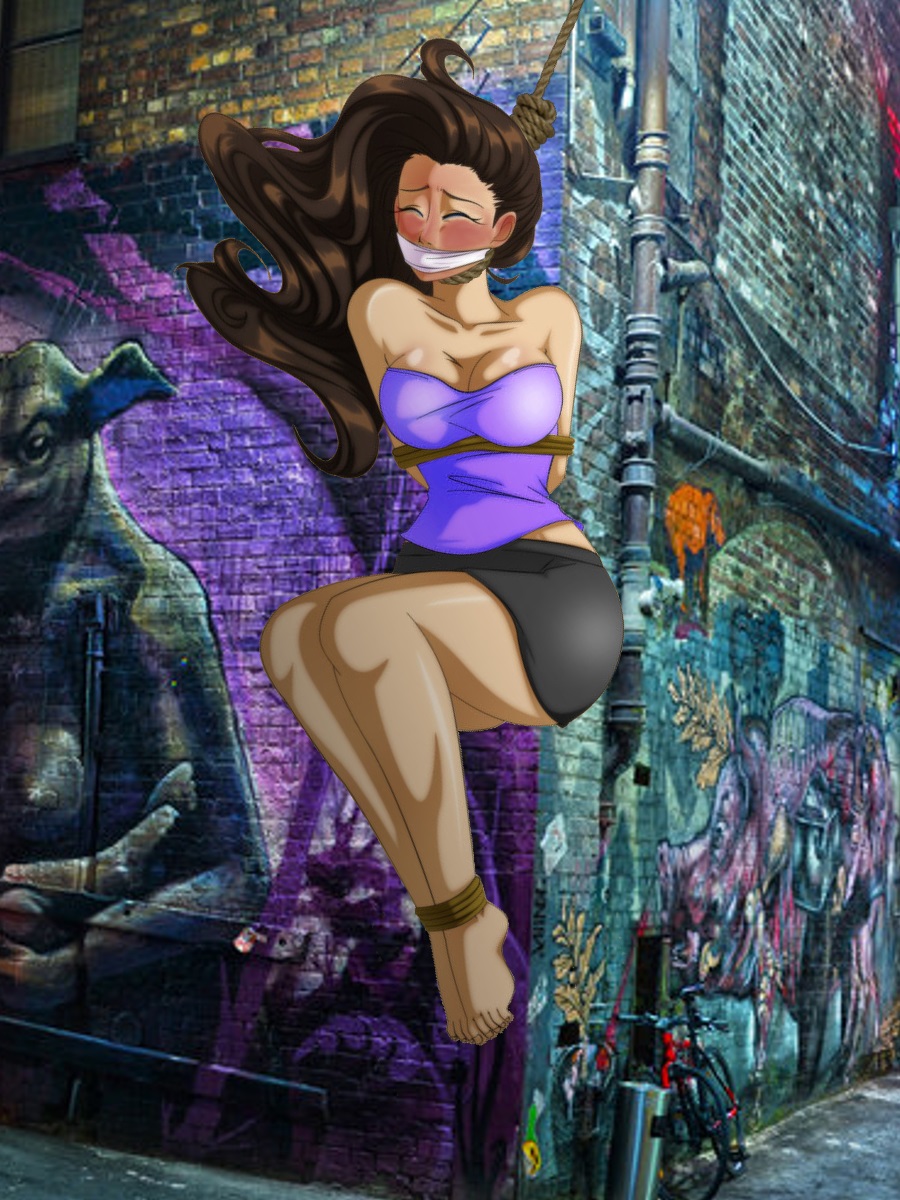 When Nucea joined the gang she was a hit with the guys, what with her long, flowing brown hair and large rack. Unfortunately that made her unpopular with the girls. It wasn’t long before the raven haired Callie took the bull by the horns.

She invited Nucea and a few girls out for a private party. They went clubbing and got Nucea more than a little tipsy. Then they took her to an unsavory part of town.

They found a section of rundown buildings that had been heavily painted in graffiti. A single light shown down to illuminate the alley. That’s when Callie had her best friend Skylar produce the rope she’d kept hidden from Nucea.

“It’s pretty artsy around here,” Callie declared with a drunken wave. “But it needs something special… something to liven up the place.”

“What do you think it needs?” Skylar asked with a knowing grin.

“I think it needs a little ‘human decoration’; don’t you?” Then she grinned malevolently at her prey.

“What do you mean by that?” Nucea asked, feeling more than a little alarmed.

She watched as Skylar shinnied up the pipe attached to the corner of the building with a length of rope in her hand. Then Callie pointed at her before proclaiming, “Get her, girls!” They all pounced on Nucea, slamming her to the ground and tying her with more rope they’d secretly brought along for the occasion.

Skylar came back down with the rope looped over a bend in the pipe. She fashioned one end into a noose as the others bound Nucea. She lost her footwear when they tied her ankles together.

“Her name sounds like ‘noose’,” Callie declared as they pulled her to her feet. “Let’s see if it fits.”

Nucea tried to scream. Skylar covered her lips with her hand as one of the girls produced a thin white rag that went over her mouth. Nucea grunted in alarm, her eyes widening with fear.

“What do you think, bitches?” Callie finally asked the others when Nucea was standing there whimpering with fright, the noose ominous around her neck. “Shall we get this party started?”

“Let’s see if she’s a real swinger!” Skylar declared. She wasn’t the least bit sympathetic. Nucea’s death would mean she would probably get her former boyfriend back after he’d stopped seeing her to go after the long, brown-haired newbie.

Nucea frantically shook her head, pleading with her eyes. “Take her up, girls!” Callie ordered. Several pulled on the other end of the rope until Nucea’s bare feet left the pavement.

They quickly tied off their end as Nucea dolphin-kicked her legs. Then Callie gave her a good, hard push, laughing as the poor girl swung back and forth before bouncing off the building.

“Like the noose, Nucea? It certainly fits you!” The others laughed unsympathetically.

Nucea kicked and grunted until her throat closed off. She jerked around a little against the building. Stray muscles twitched as she wet herself, urine trickling down her legs.

Nucea finally hung limp, fluid dribbling off her toes. “I knew she’d have to pee sooner or later after all she had to drink,” Callie laughed. “Let’s go, girls. It looks like Nucea decided to leave our gang for good. I say good riddance, bitch!”

She gave her a hard push before walking away in disgust. Skylar also gave the dangling body an angry push. Most of the others rudely shoved her corpse around, happy the bitch was dead and wouldn’t be stealing any of their boyfriends after this. Nucea’s corpse was left to quietly dangle against the corner of the building.

This entry was posted in Asphyxia Stories and tagged hanging. Bookmark the permalink.