The phone rang. A moment later it stopped ringing. That’s when the answering machine kicked in… “I’m not here and I can’t afford voice mail; I’m just a writer.”

“Stanley, pick up. I know you’re there. Where the hell is my script? You said you were working on a screenplay! Stanley? Stanley, are you going to send me something or aren’t you? I paid you an advance, you know. Now get on your damned typewriter and type me something!”

He had an idea for his next novel. But that was all he had. Now his agent wanted a screenplay.

That wasn’t so hard, was it? A screenplay was like a novel. He wouldn’t have to fill in so many details. He just had to describe the action while splicing in some dialogue.

He took his boat out onto the lake. He picked a spot and cut the engine. Then he let it drift as he stood there thinking about it.

The idea he had was promising. But he wanted to do a little research first. Maybe that would trigger a starting point for his script.

On a whim he traveled to a home and gardening store in a small town. That’s when he came across something that got his attention. He decided to make some purchases. Then he took the items home.

He took his purchases out to his boat. Then he motored back out onto the lake. He could feel things starting to coalesce in his mind. But he still couldn’t quite put it all together. And he wasn’t sure where exactly to start.

That night he visited some friends across the lake. They liked to get together and watch horror movies. They asked him if he was working on his next book. He said he was doing a screenplay, but was still fishing around for ideas.

For the next few days he stared at his word processor, his fingers hovering over the keyboard. But still, nothing would come. He knew where he wanted to take the story. He just wasn’t sure how to get started.

The phone rang again. The answering machine took over. “I’m not here and I can’t afford voice mail; I’m just a writer.”

“Stanley? Stanley?? Where the hell are you? I have a production company cooling their heels waiting for a script!”

Stanley sighed as he picked up the phone. “I’m working on it.”

“I’ll tell you just as soon as I figure it out myself.”

“Then I guess it’s a good thing I’m not writing comedy.”

“Stanley, give me something. Give me anything! What are you working on?”

“I was thinking about a serial killer who goes around drowning girls.”

“I don’t know. A serial killer who drowns girls? It’s kind of different; it shows promise. So what’s the holdup?”

“Then what are you waiting for? For Gawd’s sake, Stanley; go get her!”

“That’s the spirit! Stanley, I want pages! Get me some pages!”

“I thought you wanted me to get a girl to drown.”

“Damn you, Stanley!” Then the line went dead.

Stanley sighed heavily. Where was he going to get a girl to drown? He had everything ready on his boat. All he needed was the right person to start his script.

On a whim he took a drive down to LA in his van. He didn’t really know who or what he was looking for. He simply hoped something would come to him, some sort of inspiration.

He was driving around the outskirts of the city when an incredible sight caught his attention. It was a young woman walking along the side of the road in a wedding dress. That was someone he hadn’t even considered.

Occasionally she looked back over her shoulder as though someone was coming after her. That’s when he pulled over and opened the passenger side door to his van, asking if she wanted a lift. She nodded as she came over and eagerly climbed inside.

“Where are you going?”

“Just get me the hell out of here.”

“I can do that.” And with that he drove off.

Along the way she told him all about it. The guy was an ass. He didn’t deserve her. She hadn’t wanted to get married in the first place. So she’d bailed a couple hours before the wedding.

She asked him to stop somewhere and pick up some beer. He said he had some at his cabin by the lake. She said that would be fine with her.

When they got there, he let her inside and got her a beer. She quickly downed it and then asked for another. That’s when he saw the beginning of his script start to take shape in his mind.

Several beers later she was all but hammered. That’s when he suggested taking her to a party. She protested she didn’t have anything else to wear.

He said the partiers would find her appealing in her wedding dress. They worked on movies, and liked seeing people in costume as it gave them inspiration. She giggled as she decided that would be a great idea.

He told her the party might run a little late. She said she didn’t care. She had no intention of going back to LA, at least not right now.

He asked how she felt about going across the lake for a boat ride. She said she didn’t mind. In fact she liked boats.

He walked her along his dock and got her into his boat. Then he took her out onto the water. He figured the rest of it shouldn’t be all that hard, especially since she was so thoroughly intoxicated.

She was excited about going to a party. And she liked being out on his boat. At one point she even suggested they might take a little swim together. He got the impression the beer had made him somewhat attractive to her.

Partway out he began playing with the engine controls. Then he shut it off. The boat glided to a stop.

“What happened?” she asked, looking all around.

“Engine conked out,” he replied as he went back to have a look at it. “It happens from time to time. Usually I can fix it right away with a wrench and a pair of pliers.”

“The boat will stay afloat. It’s just the engine that needs work.”

“But what if I fall out?” she giggled, standing up and wobbling dangerously close to the opening in the railing on deck.

“I can help you with that,” he told her with a smile.

He got the rope he’d made ready. Then he tied one end around her ankles. The other end he attached to a cement block, the one he’d purchased back at that home and gardening store.

“There,” he said with a smile as he pattered her legs. “All secure. Now if you fall out of the boat, the rope will keep you tied to this cement block.”

“Are you sure?” she asked with a giggle. She seemed to be amused by the whole thing.

“Let’s find out.” Then he pushed her out through the opening in the side of the boat.

She let out a cry as she pitched forward. She hit the water with a splash. But she came right back up, sputtering angrily.

“You said you wanted to go for a swim.”

“Not in my wedding dress?!”

“I thought you wanted to make sure the rope would keep you secured. You’re tethered to it right now; isn’t that right?”

“Yeah, but I never expected to end up in the water!”

“Let’s see if you stay tethered, ok?” Then he pushed the block to the edge of the boat.

She gave him a funny look before asking, “What are you doing?” That’s when he pushed the block off the boat. It hit the water with a splash before plummeting straight to the bottom.

She let out a cry that was abruptly cut off as she was jerked under. Immediately she began writhing and bubbling as she was taken all the way to the bottom. She tried pulling for the surface with her arms. But she couldn’t make any headway against the cement block taking her down.

She hadn’t grabbed a good breath when the block was pushed into the water. So her lungs were already straining. She spasmed and convulsed the moment the block hit bottom.

She coughed and grunted as she flailed for the surface. But her ankles were too tightly fastened with the rope. The block was keeping her tethered to the bottom.

She began hitching and gurgling as she coughed up water and bubbles. She spasmed and convulsed painfully, her body jerking and doubling over. Her struggles lessened until she became limp, her body gently swaying back and forth in her white wedding dress.

She stared straight ahead in astonishment. She had a final, fleeting thought that she might have been better off going through with the wedding instead of running away. A moment later the life winked out of her horrified eyes.

Stanley stayed at the surface long enough to watch the bubbles come up. After a while the water became still. There was no indication of life below. All he saw was the occasional bubble that popped to the surface. Even those stopped coming up.

Stanley went up to the front of his craft and started the engine. Then he swung the boat around. That’s when he motored back to the dock.

The phone rang. The machine answered… “I’m not here and I can’t afford voice mail; I’m just a writer.”

“Stanley, did you drown her yet?”

“I was just going to sit down and start writing about it when you called.”

He sat down at his word processor and thought about the events of the evening. Then he began to type…

She was walking along the side of the road in a wedding dress when he saw her.

Now he had his beginning…

(Inspired by the TV movie Cabin by the Lake.) 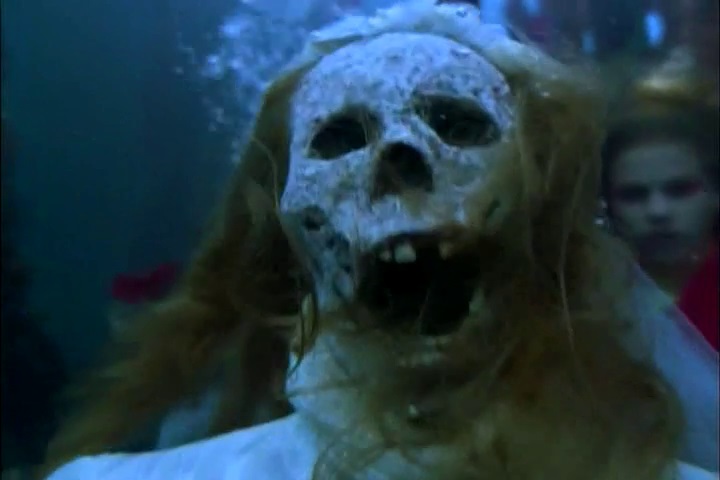 This entry was posted in Drowning Stories and tagged drowning. Bookmark the permalink.