Anasuya gets the last word

There were simply no more parts for her. Anasuya pleaded with three different producers and four directors she had worked with in the past. To a man they told her she had grown too old for the parts they had available.

She offered to play an older woman’s part. But they had not found her a script, even though parts were being offered to other actresses. Anasuya quickly came to the conclusion she had been blackballed.

She wanted to show them she could still act. But there would be no further opportunities. It filled her with a quiet anger.

She discovered a party all but one of the directors would be attending. It would be the perfect place to make a lasting impression. So she contacted a couple of technicians, men whose help she would need.

At first they balked at her proposal. In the end she persuaded them. She would need their help to make sure her plans went off without a hitch. After all, the producers and directors were important men who would not wish to allow her to besmirch their reputations.

She was given an invitation to the party. So she spread the word around that she would be providing a special entertainment for the producers and directors. Soon they would all see exactly what she was capable of.

The night of the party she sought out the two technicians. They assured her all preparations had been properly made. Her presentation would go off without a hitch.

She made it a point not to mingle with the producers and directors. They tolerated her presence, although avoiding her as much as possible. Instead, she socialized with the other actors and actresses, telling them she had a special presentation for everyone.

At 10 pm she announced she was ready. People began to gather around as she made her way to one of the larger trees on the property. She found the two technicians who nodded they were ready for her.

She thanked everyone for their kindness and friendship, naming some who had gone out of their way to help her during her career. She waited until the producers and directors began to wander outside to see what all the commotion was about. Then she bowed before one and all.

A noose dropped as though from out of nowhere, compliments of those two technicians. She knelt and picked up the set of handcuffs they’d hidden for her behind a bush. She reached up and looped the noose around her throat to the uneasy murmurs of those watching. Then she dramatically cuffed her wrists behind her back.

“This will be my last performance!” she said aloud. “I hope it will be enjoyed by one and all!” Then with a nod, the two techs pulled on their end of the rope.

Anasuya was lifted six feet off the ground, well out of reach of anyone who might have rushed to her aid. They quickly tied the rope off. Armed with wicked looking blades, they were prepared to fight off anyone who might try to untie the rope.

The producers and directors looked up in horror as Anasuya started to kick. They hollered for her to be taken down, not wanting to be a part of this distasteful demonstration. The two techs dutifully manned their end of the rope, driving back anyone who threatened to intervene.

Anasuya felt the agony of the rope around her throat. But the noose was thick. It would give her a chance to put on a good show. After all, she wished to entertain everyone.

She choked and twisted as she struggled. The agony in her chest became more pronounced the harder it was to breathe. But there was also a strange exhilaration, that as well as an arousal that became more intense the longer she struggled.

She danced, scissored and pedaled as the minutes ticked away. Her face flushed hotly as she struggled to keep up the performance. Her body responded until she could not help rubbing her thighs together.

It blossomed outward as she climaxed at the end of her noose. Some in the crowd were horrified. Others were enchanted at her dance, especially the way she kicked her way into a sexually gratifying experience.

The actors and actresses began to applaud. The faces of the producers and directors turned red with embarrassment and shame. They knew the purpose of her dance was strictly for their benefit.

Anasuya fought harder as the noose began to tighten. Now she was starting to have second thoughts. But seeing the shamed faces below spurred her to kick and dance even harder as though demanding they put their attention on the actress they had decided to shun.

Her peers applauded her performance. The heads of the studios could only watch red-faced. Anasuya kicked her way into a second orgasm before finally hanging limp.

She gently swayed back and forth for the last three minutes of her life. Her bladder finally released, her last act being to piss on those who had decided to cut short her career. There was a faint flicker of a smile at the corners of her mouth as she began hitching in little jerking motions as internal organs started shutting down. Then she settled down, gently twisting in place.

Her peers gave her an ovation. The producers and directors shamefully abandoned her corpse to go inside and attempt to ignore what had just taken place. But word soon went out over all the land. And it was Anasuya who got the last word. 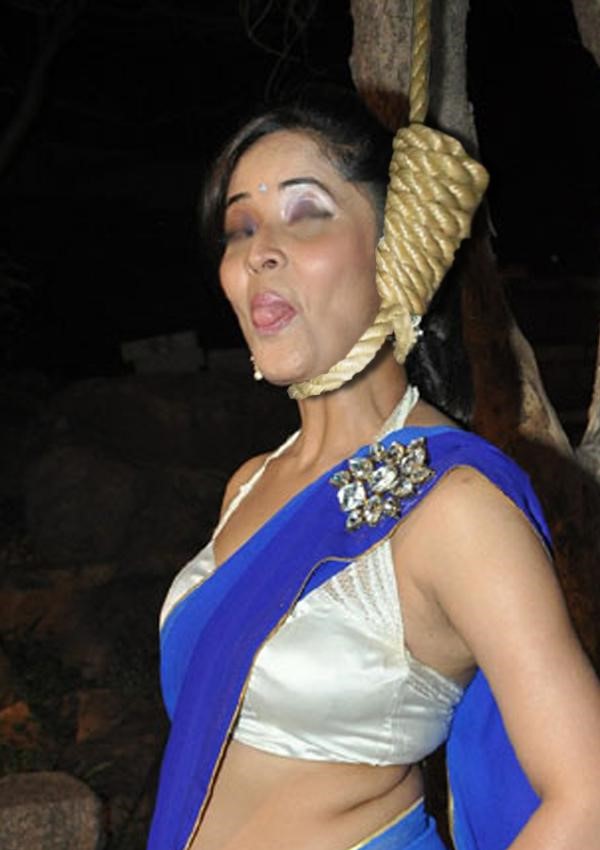 (Inspired by a ramharraja2001 manip and idea)

Kajal is strangled by her boyfriend

“You have shamed me, Kajal!”

“Arjun, what are you saying?”

“Word has spread around the village. You were seen down by the creek making love to Vihaan.”

“It was you, Kajal. And he was not the only one. You have done this many times before. You share your favors with so many.”

“Arjun, no. You must be mistaken.” But her protests were in vain and she knew it.

“I am not, Kajal. I have tolerated your indiscretions to a point. But this one is beyond contempt. Something must be done.”

“No, Arjun. Please.” That’s when he pulled the cord out. She gasped with fright as well as a great anticipation.

This scene had played out so many times before that Kajal now wondered what was wrong with her. This was not the first time he had wrapped the cord around her throat. But now it might very well be the last.

That time she had felt such a wave of fear at his fury. But strangely the cord tightening around her neck had seduced her. The rapture of losing her breath with the possible loss her very life had taken hold of her.

At the last moment he’d pulled back, preventing permanent damage. Had he done this before to a previous girlfriend? It made her wonder.

It was a minor thing, a small wifely transgression that had caused him to punish her thus. But something in the way he’d strangled her had appealed to her. Within a month she committed a similar transgression, earning yet another strangulation of the cord.

When she regained consciousness he was tender with her, almost pleading with her not to make him do that to her again. But she could not help herself. When she transgressed again he did not use the cord, forcing her to up the ante.

The butcher wasn’t even attractive. She used the excuse she was getting a good price for a choice piece of meat. Arjun had responded by strangling her with the cord again.

Oh, what waves of rapture! She could not understand why it affected her thus. It was so much better than lovemaking. But she could not tell him his method of punishment brought her such great delights. And there was no other way she could get him to strangle her.

She broke her marriage vows a second time with a neighbor down the street, trying to explain to Arjun that his wife was ill and she was only offering a kindly service to him. His response was to strangle her once more. That time he had pulled tighter, resulting in a greater rapture.

Next was a young man swimming in the river. Then it was a local farmer. Each time she made sure Arjun found out. And each time he applied the cord. The threat of death could not overcome her desire to experience that rapture again and again.

And so it was… until he stopped strangling her. She became frustrated. Her infidelities became more provocative until in desperation she had made love to Vihaan down by the creek in full view of several. That was bound to get Arjun’s attention.

“Why, Kajal? Why do you do this to me?” But she had no answer to give him. How could she explain how the danger of the cord brought her such unfathomable pleasures?

“Arjun, I… I am sorry.” What more could she say? She was secretly hoping for the cord. And now she was trembling with anticipation as he wrapped it around her throat and then tightened it.

Had she gone too far this time? What did it matter? Maybe it was better this way.

She gasped his name, even as the waves of pleasure began to come crashing in on her. She swooned at his breath on her neck. She could feel how angry he was. And in her mind she was telling him, “Tighter, my love; tighter.”

“Kajal,” he breathed as he pulled the cord tighter. She gurgled as she began to shudder. It had been so long; she wanted to give herself to it fully.

“Tighter! Strangle me, my love! Do what you must!” 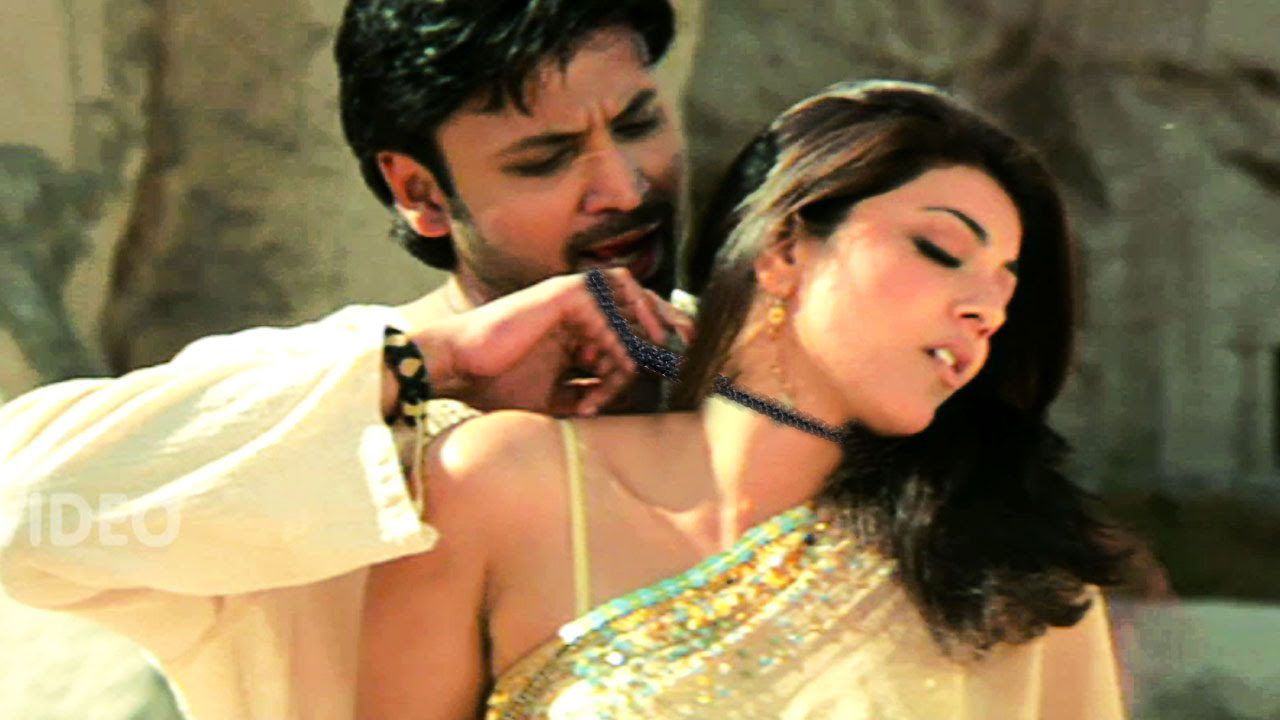 “You wouldn’t understand. Kill me, my love. It is the only way.”

It cascaded over her as she gave herself over to it. She did not see the tears of regret in his eyes as he pulled with all his might. All she felt was great pleasure as she spiraled into the depths of eternity.

This entry was posted in Asphyxia Stories and tagged hanging, pictures, strangling. Bookmark the permalink.