For Valentine’s Day Mike Hunt and his girlfriend Sandy decided to do something special. They invited Dorothy over to spend the night. It was to be a special gift for Sandy.

The drinks flowed freely as the air became filled with the promise of a sexually exciting evening. Dorothy had worn something special for the occasion. When she undressed she had on a pair of white, short shorts with a white top emblazoned with a red heart in the center of her chest. It meant she wanted to give herself “wholeheartedly” to them on this special evening.

Sandy got the idea to add something special. She brought out a red velvet blindfold for Dorothy to wear. Dottie eagerly put it on, anticipating the blind pleasures she was about to enjoy. Without her eyesight it meant her other senses would be greatly heightened. 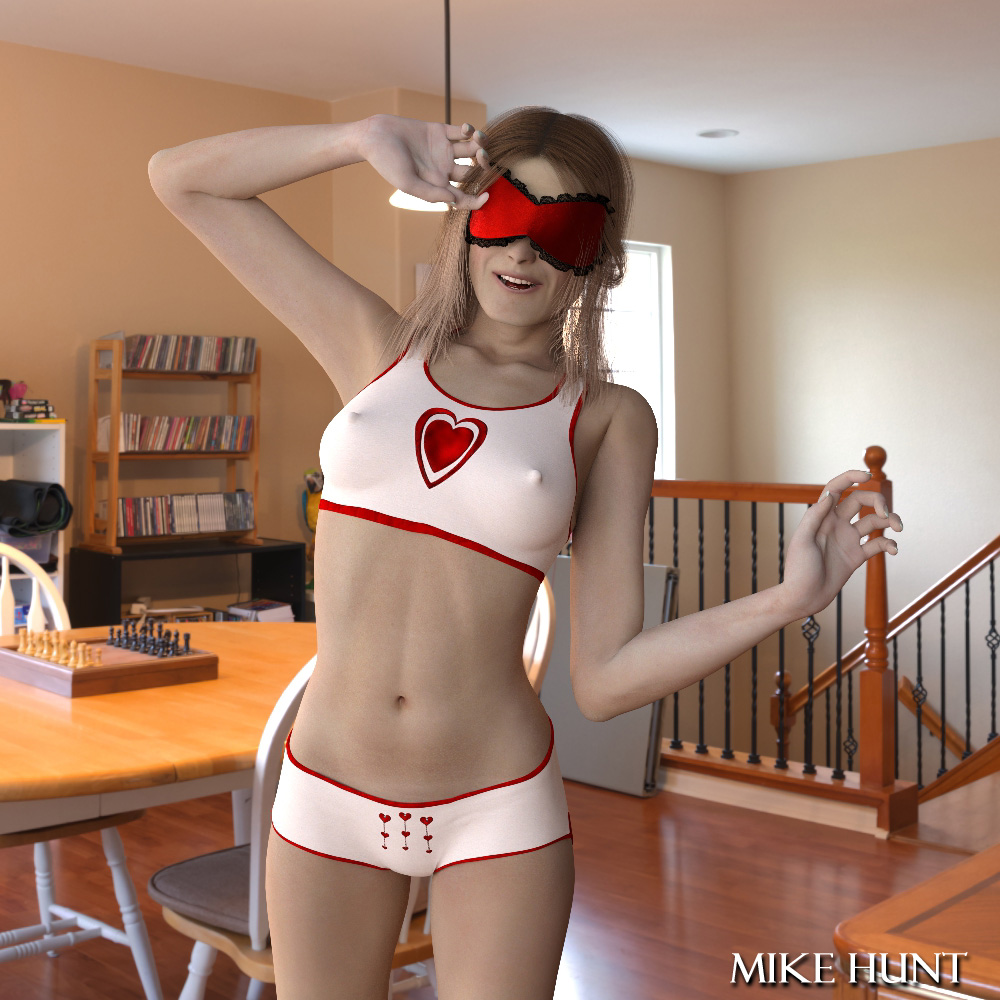 She heard movement from the couple she was visiting. “What are you doing?” she asked excitedly.

“Just dressing up for the occasion,” she heard Sandy gasp excitedly.

“Actually, she means ‘dressing down’ for the occasion,” Mike corrected her as they both fully stripped. His girlfriend just moaned her excitement over the coming events of the evening.

Dorothy stood there with breathless anticipation. Her nipples were poking through her top. She was really looking forward to this. 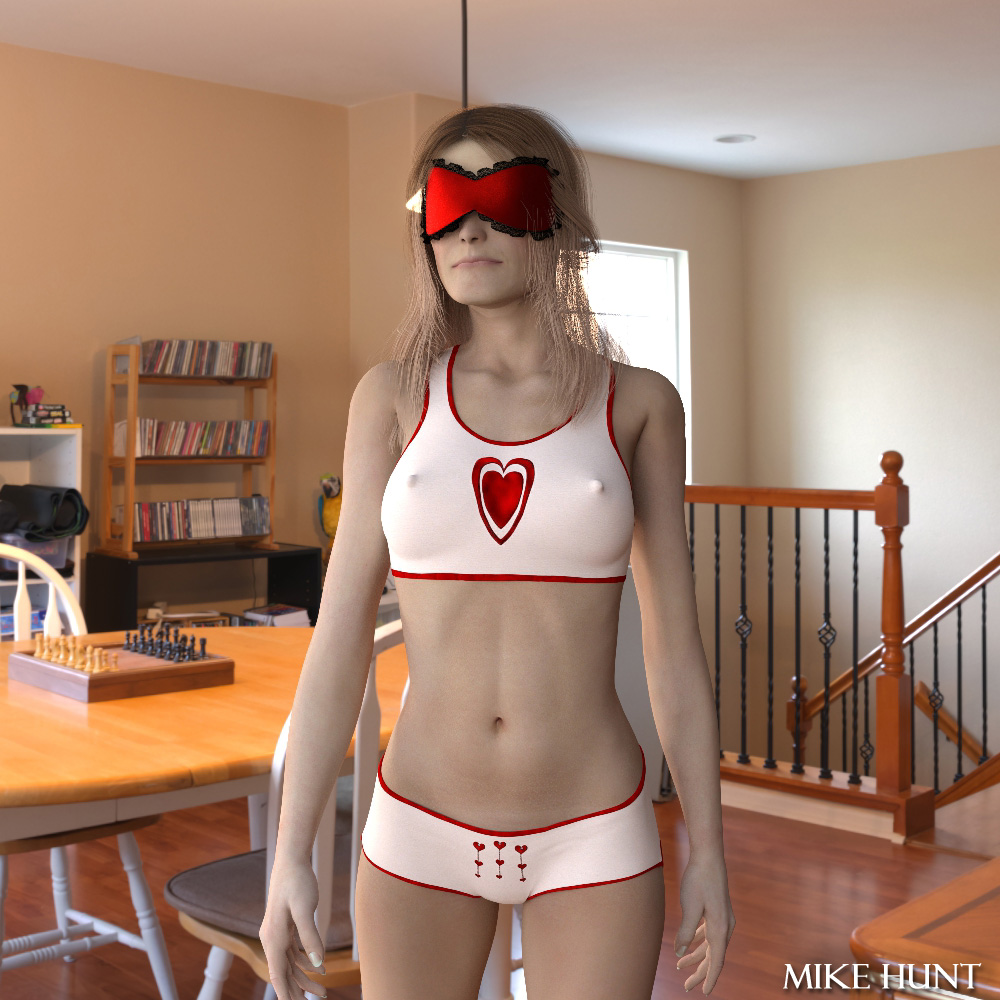 In the background she heard music. An appropriate song was playing…

“An appropriate song, don’t you think?” Sandy asked her with a chuckle of amusement. They were close now. Sandy started touching Dorothy’s body all over, feeling up her own pussy with growing excitement over the special evening they’d planned for their guest.

“It’s more than appropriate, love,” Dorothy replied. Then she felt Mike’s hands reach around from behind to grasp her breasts. She panted with excitement, looking forward to tasting the erection she could feel pushing up against her from behind. 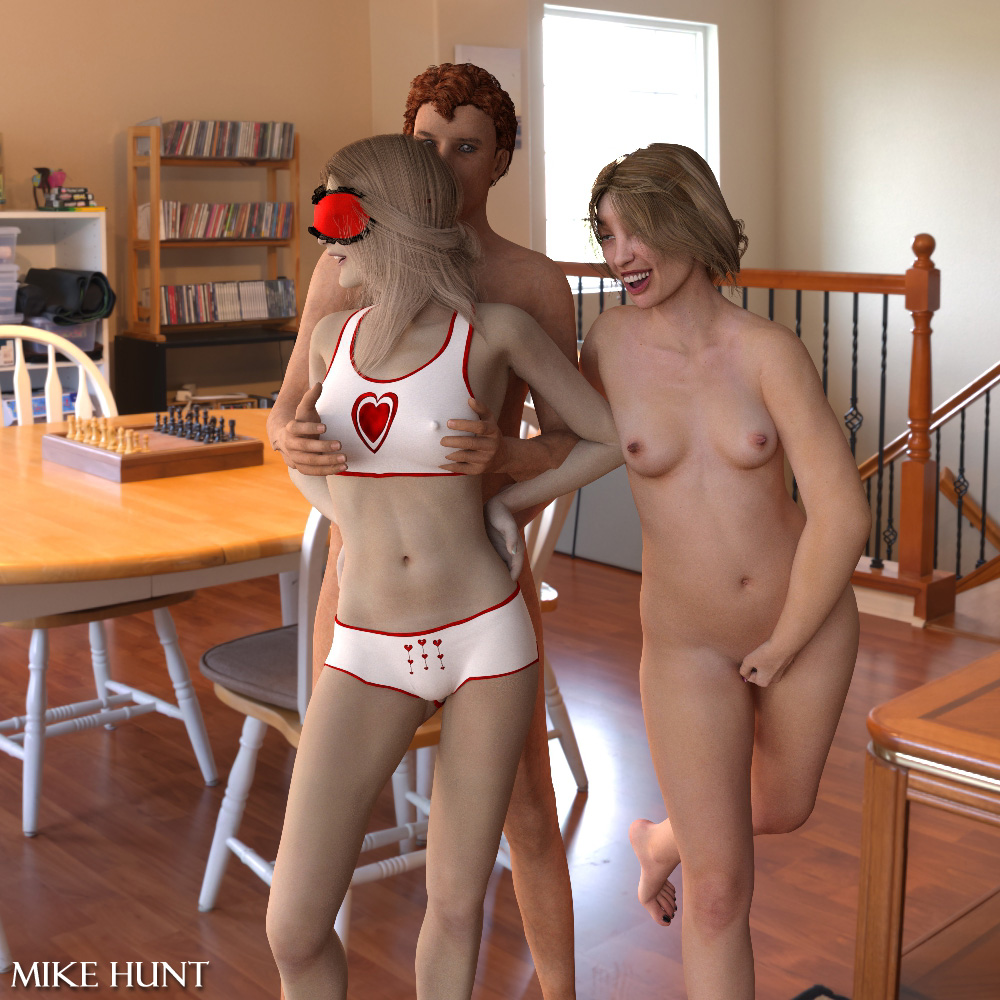 She spread Dottie’s legs apart. Then she dropped to her knees. Her hands grasped Dorothy’s sexy ass from behind as she kissed the tantalizing crotch that was now before her.

“Bloody hell!” Dorothy panted as Sandy kissed and caressed her all over. Her nipples protruded out of her top as a talented tongue began exploring her nether region. She’d anticipated a little girl-on-girl action this evening. But she was unprepared for the soft tongue that now began to lick pleasure onto her clenching slit. 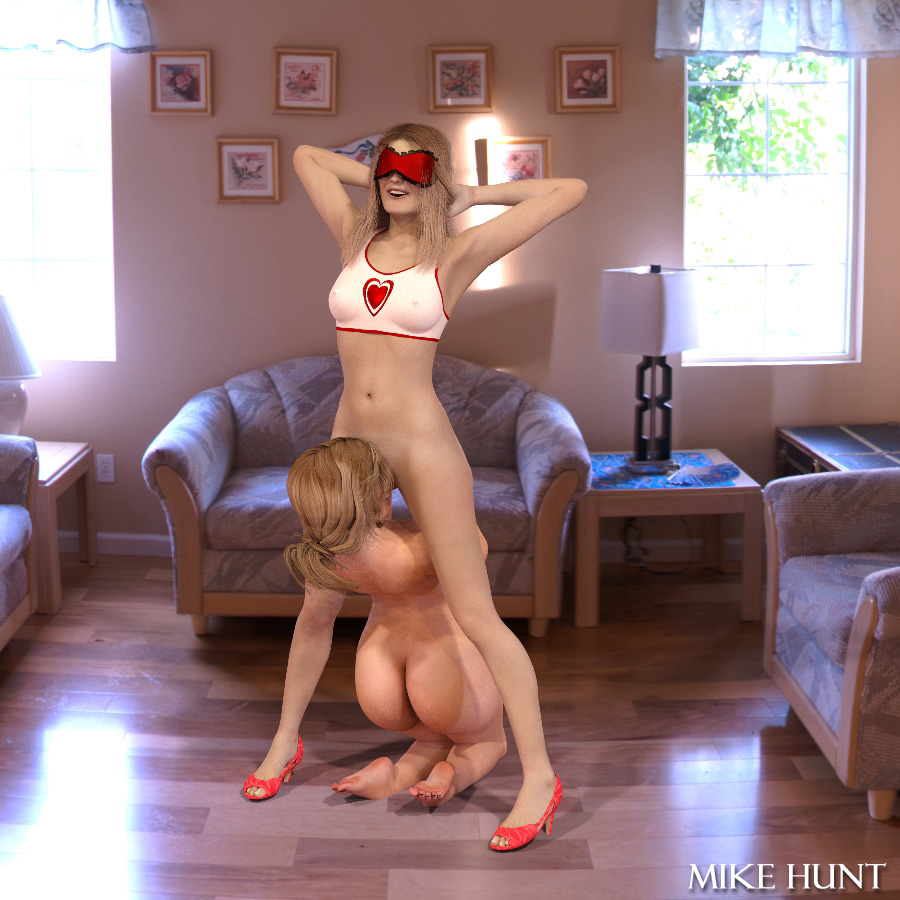 Dorothy put her arms behind her head as she thrust her chest out. She moaned and whimpered as Sandy feasted on her flowing juices. “Bloody hell, love! What are you doing to me?”

“I’m getting you primed for the main event,” Mike’s girlfriend purred seductively.

Dorothy could not believe how wonderful it felt. The sexy bitch between her legs had such a talented tongue! She couldn’t remember the last time someone had licked such pleasure into her dripping slit like this. 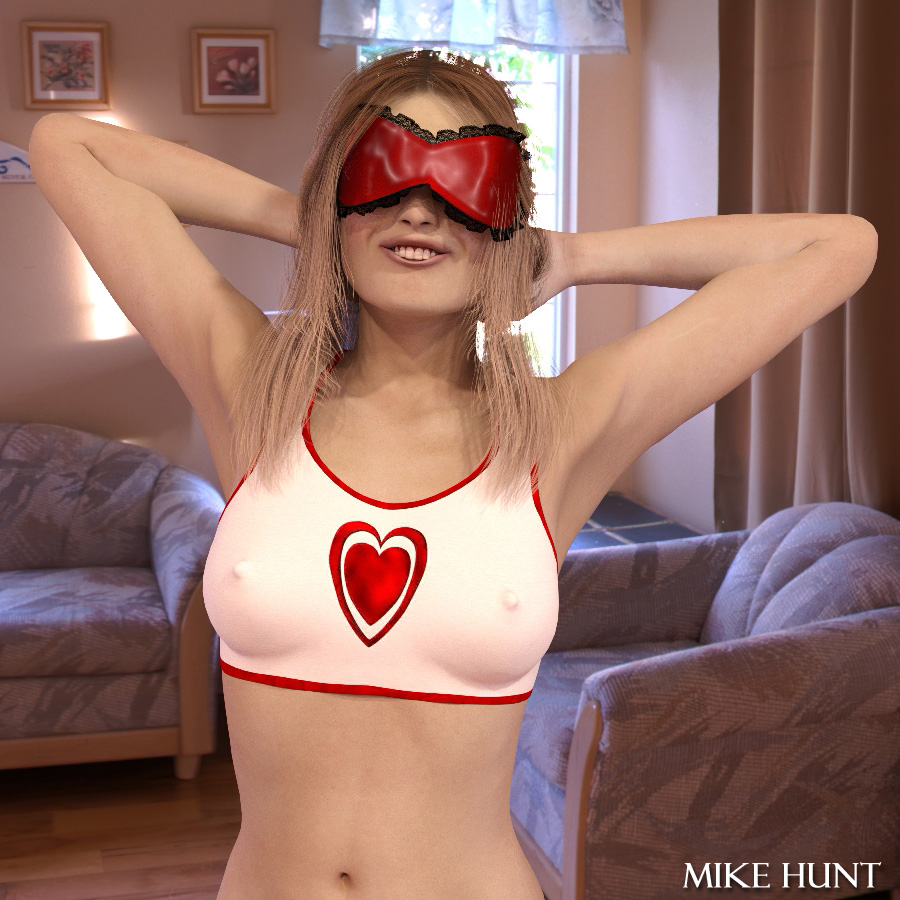 “Looks sexy, you two,” she heard him say from somewhere across the room.

“Let me have it!” Dorothy gasped. She figured his cock was about to make an entrance now. She was so excited she could hardly stand it.

The song was still playing in the background… “Cupid… draw back your bow… and let… your arrow go… straight to my lover’s heart for me… for me…” That’s when Dorothy heard something whiz through the air. 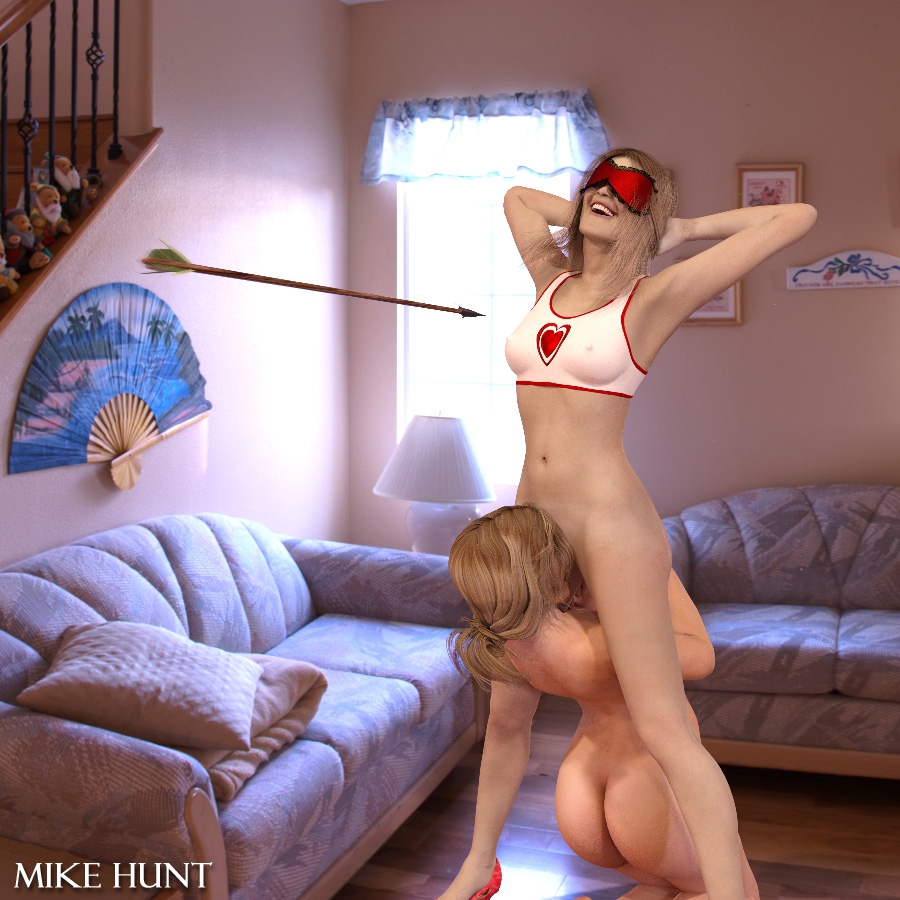 Something sharp suddenly penetrated her chest, right through the red heart in the middle of her top. Dorothy felt it emerge out through her back. She let out a cry of surprise as the song continued… “Cupid please hear my cry… And let your arrow fly… Straight to my lover’s heart for me”

Sandy never paused when the arrow hit. She felt Dorothy shudder, but she didn’t even stop. She just kept on licking until her tongue penetrated deep into Dottie’s dripping slit. 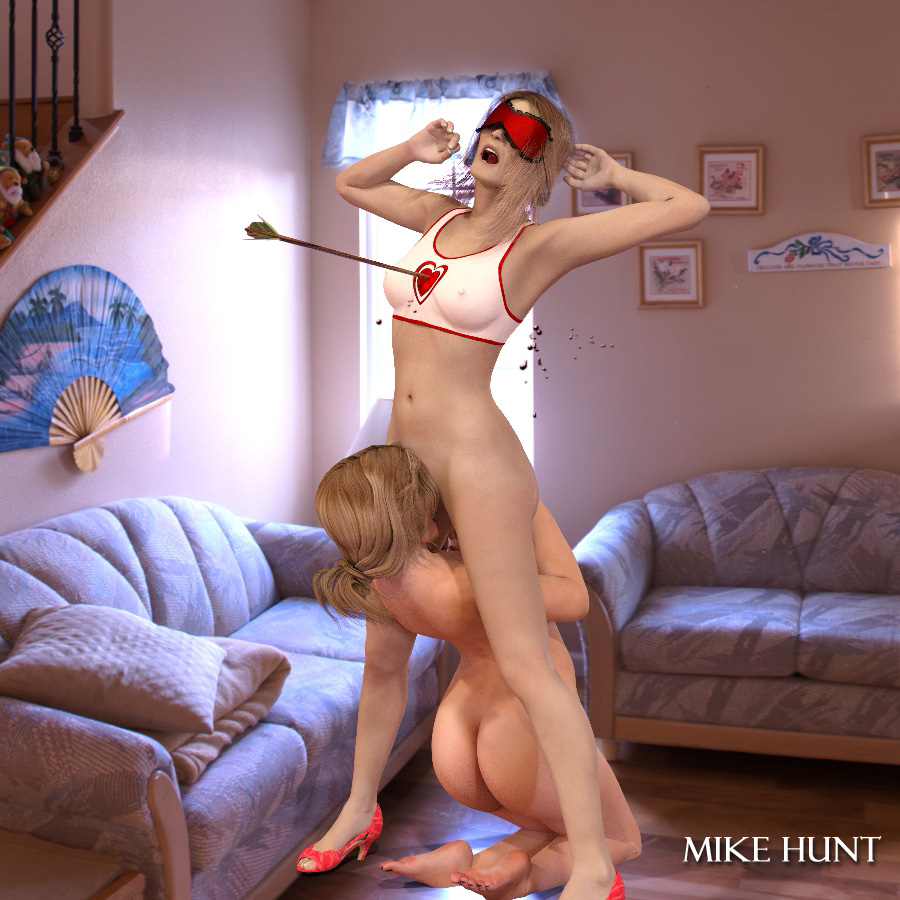 Surely Sandy had heard it, right? Why was she still licking without seeing to whatever had happened to her?? The sharp pain in her chest was unlike anything she had ever felt before.

There was no change in the sensual assault she was receiving. Sandy’s tongue continued to poke and probe as her lips nibbled on her swollen nub. If anything Dorothy was tongue-fucked even harder after whatever had penetrated her chest.

‘Nothing’s wrong, darling,” Mike’s girlfriend purred at her, momentarily pausing from her feast. “In fact everything is just perfect.” Then she moaned as she went back to feasting, hungrily working overtime with her mouth as she licked, sucked and slurped. 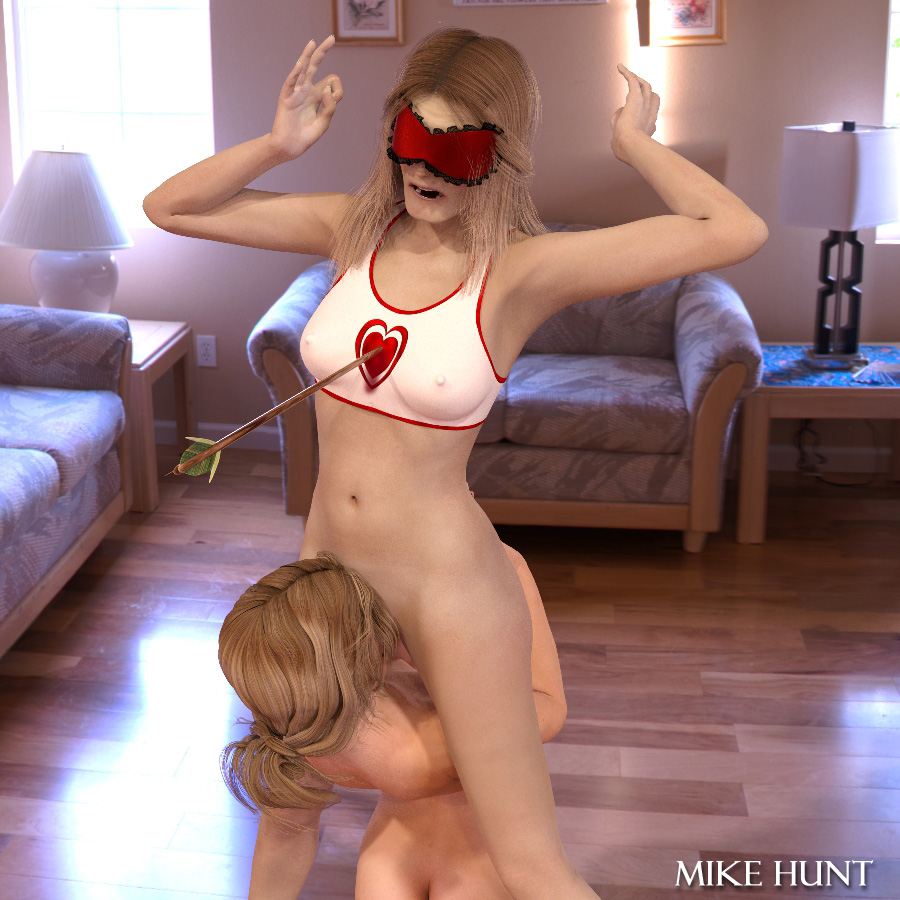 Dorothy started blindly feeling around until she found something out of place. She felt a shaft protruding out of her chest. What the hell was this doing here??

“’Cupid drew back his bow and let his arrow go straight through his lover’s heart, darling’.” Then she went back to slurping and tongue-fucking the tasty treat before her.

Dorothy was astonished. “Arrow? I’ve been shot with an ARROW??”

Sandy moaned excitedly as she hungrily slurped. Dorothy was incredulous. Had Mike truly shot her with an arrow?? 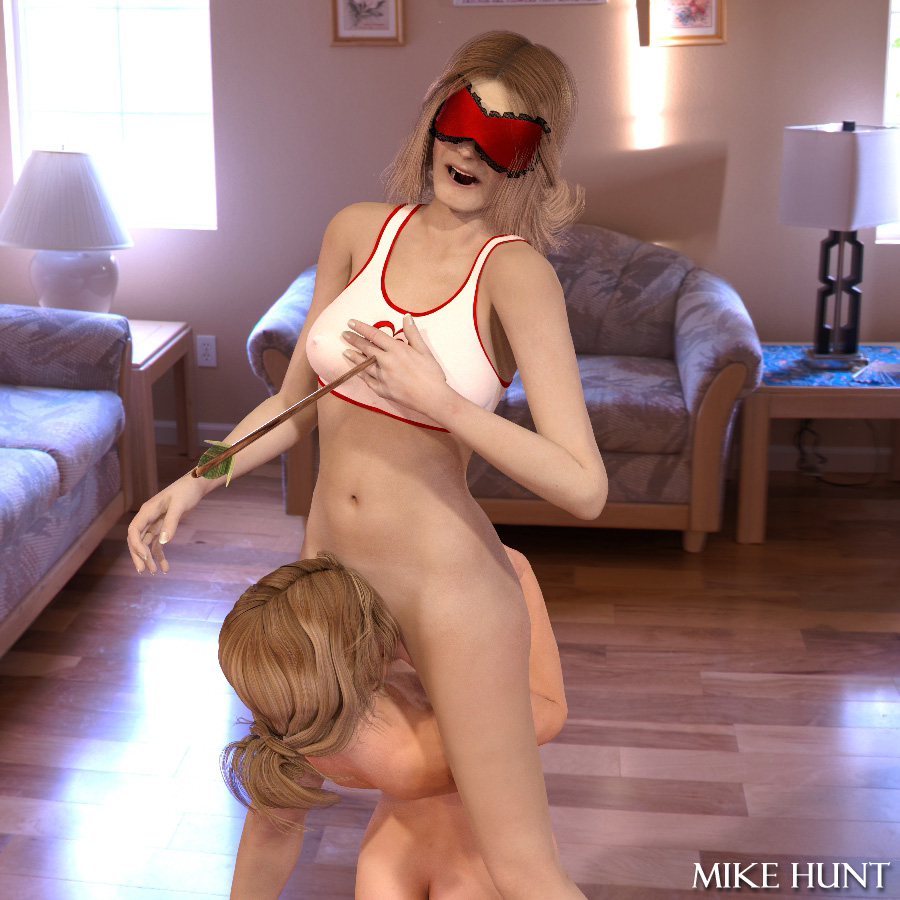 “You SHOT ME??” But now Sandy had paused and was singing the words… “’Straight to… my lover’s heart… for me… he shot her for meeeee…” Then she began tongue-fucking the astonished woman’s wet, dripping pussy with savage fury.

Dottie felt herself starting to weaken. She began to bend over backward, struggling to keep herself upright. The arrow in her chest was stealing away her energy, her ability to remain standing. Sandy just held on tightly, helping her remain upright as she kept moaning and munching.

Dorothy let out a cry that was part pain and part pleasure. That’s when the full realization of what had been done to her finally hit home. She shuddered hard in orgasm, even as she could feel her life’s blood flowing out of the wound in her back. 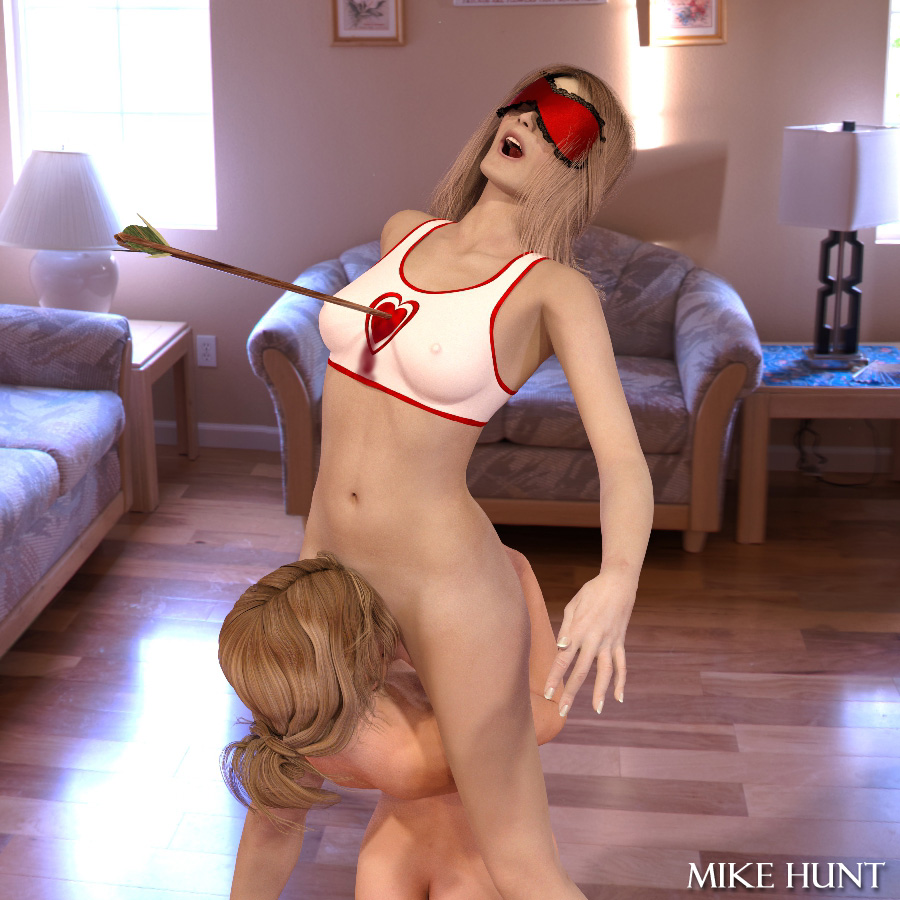 Dorothy couldn’t believe it! She’d actually been shot with an arrow, right through the center of her chest!! She could feel both ends sticking out front and back.

Sandy was still between her legs. Dorothy felt her bum being grasped with strong hands. The bitch was still muff-diving while holding her upright.

The song had stopped playing. A romantic instrumental was quietly playing in the background. But Sandy was still humming the words of the last song as she continued to feast… “’Straight to… my lover’s heart… for me… he shot her for meeeee…” 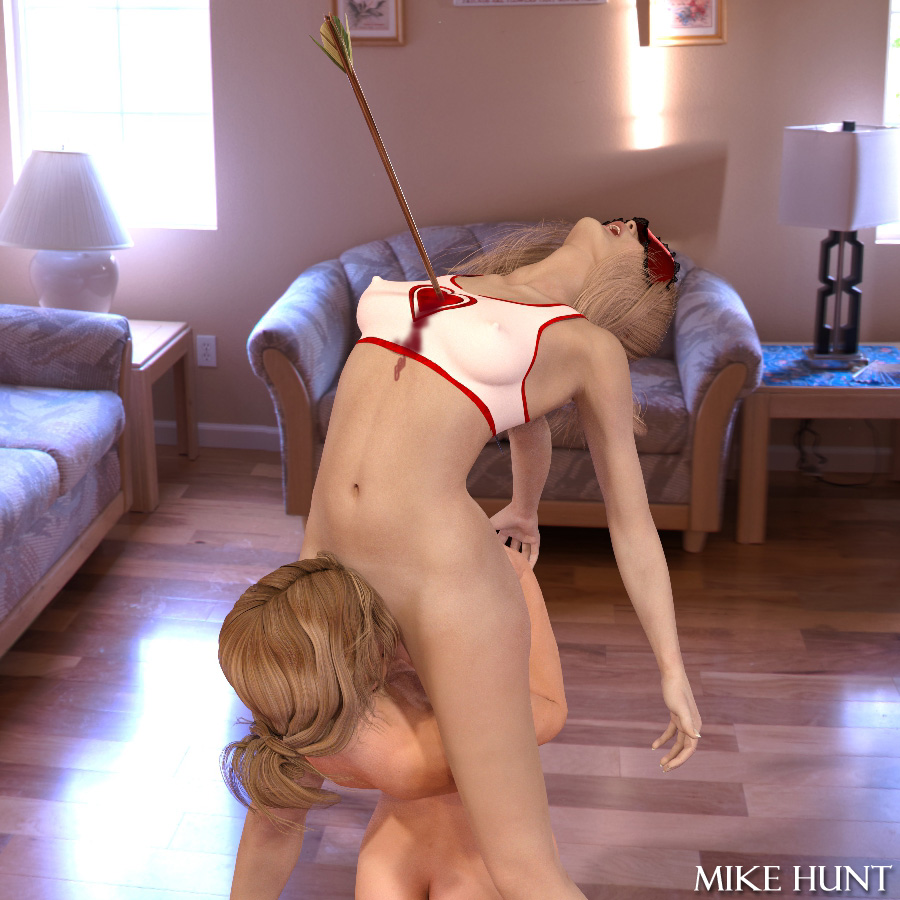 Sandy was slurping while moaning, “Into the afterlife, my darling…. Orgasm your way down into the depths of the afterlife.” Then she was humming that song again… “’…straight to… my lover’s heart for me… he shot her for meeeee…’”

Dorothy began to gurgle up blood. The wound in her chest leaked crimson. Sandy hungrily chowed down on the quivering, spasming pussy while murmuring, “Yes, darling. Feel yourself awash in a sea of pain and pleasure as you depart this world.”

Sandy held on tight, keeping Dorothy from falling over backwards. The impaled woman was now gurgling and spasming in her death throes. Blood bubbled up into her mouth as she went into convulsions. 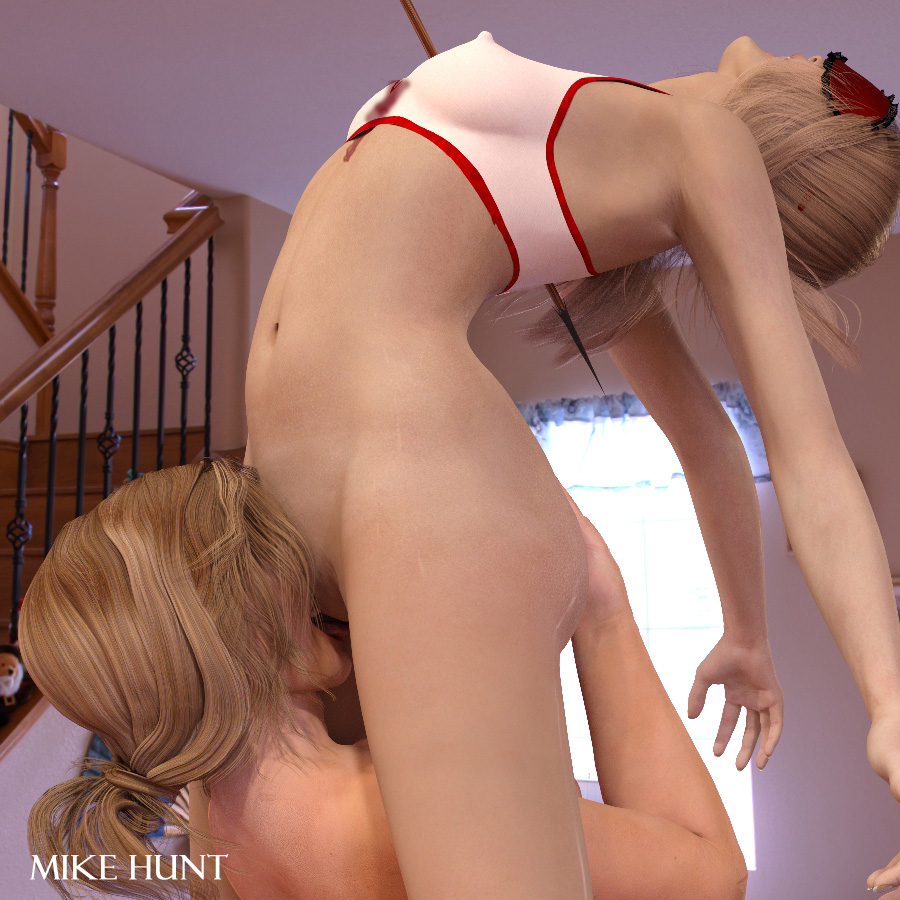 “Darling?” Mike asked, badly in need of a release.

“Just a moment, my love. Just making sure to send her into the afterlife while orgasming her way into oblivion. ‘Shot through the heart… and you’re to blame. Darling, you give love a bad name… Cupid draw back your bow… and let your arrow go straight to my lover’s heart for me, for me…’”

“She’s almost gone, Mike. Give us a moment?” 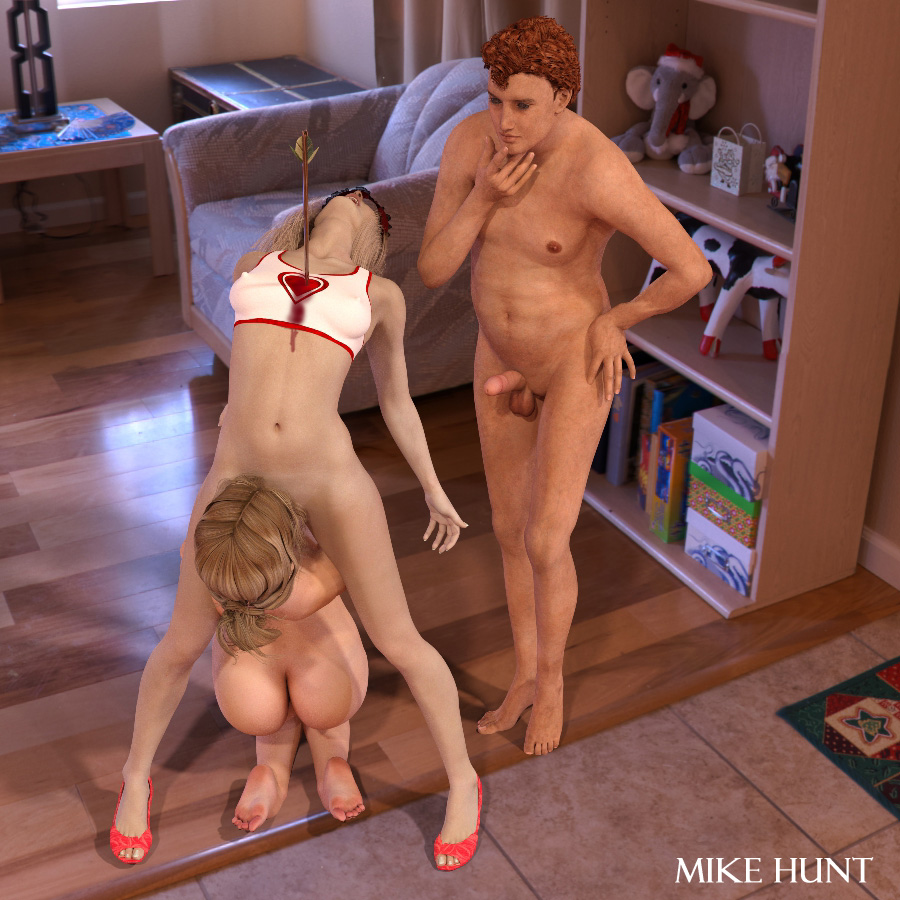 All life bled out of Dorothy’s spasming form. Sandy had one last delicious taste. “You’re all done, darling. Have a good trip.” Then she let her go. Dottie started to pitch over backward, no longer being supported. 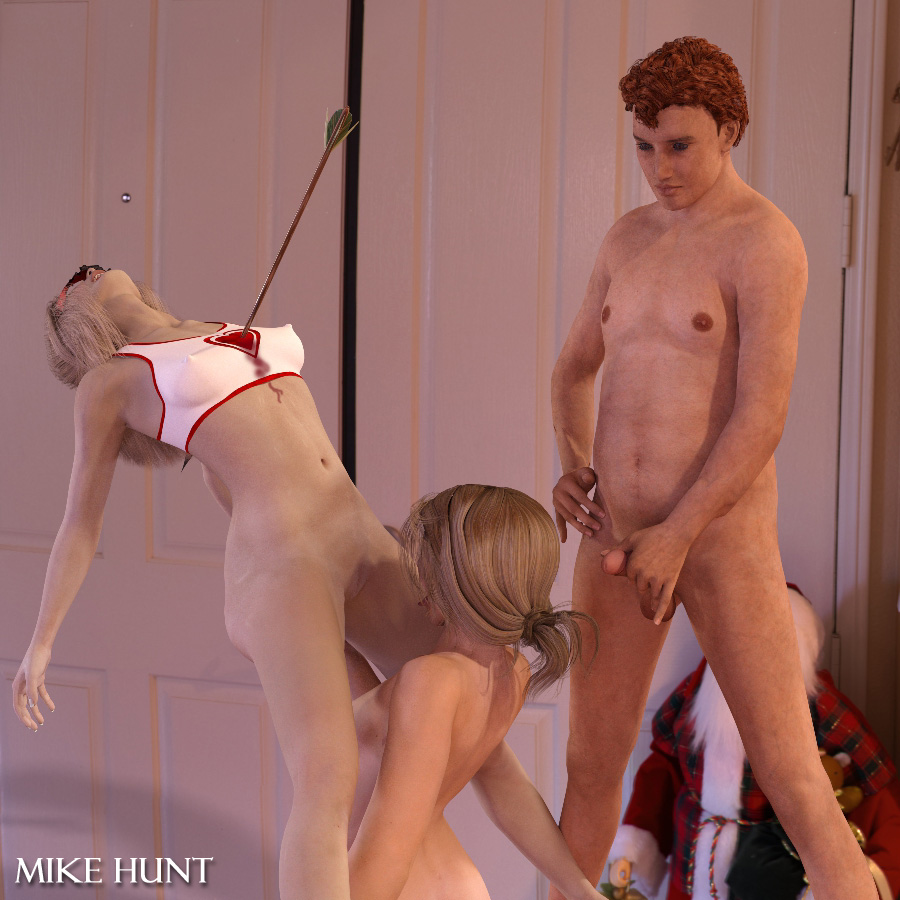 She felt to the floor with a loud thump. But Sandy no longer cared. Now she had someone else to attend to. 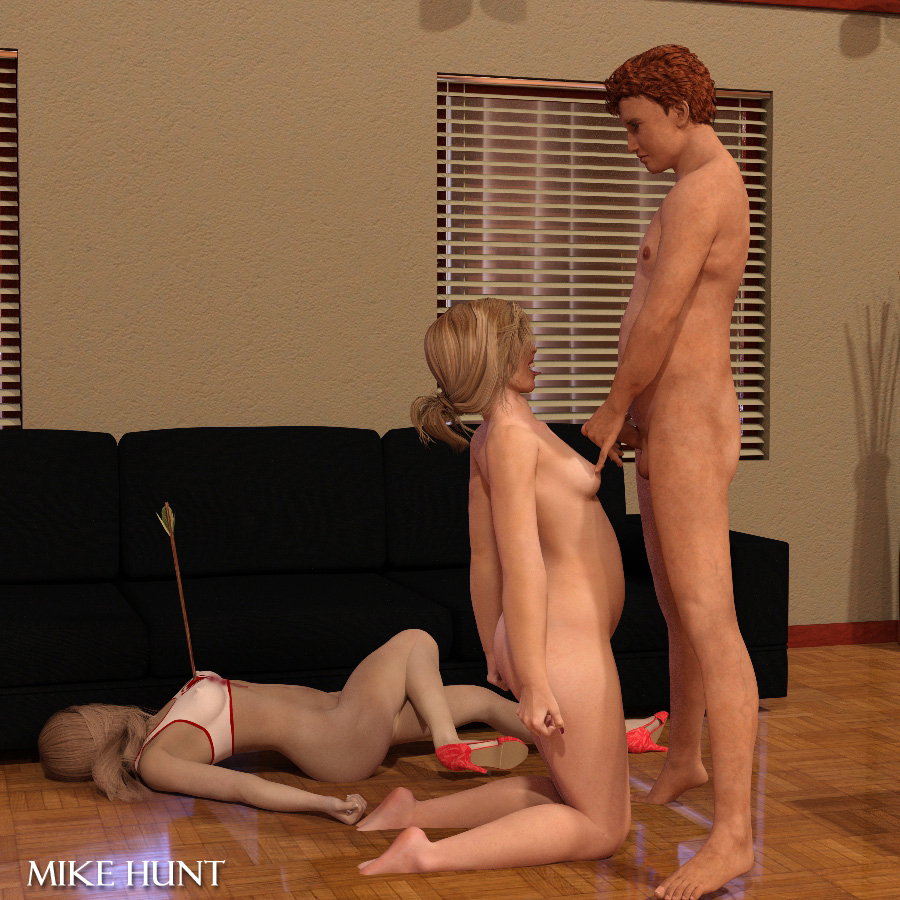 Mike needed no further urging. His cock went off, his cream spurting onto his girlfriend’s chest. Sandy got a little on her face, although most of it splattered her upper chest.

“Was shooting Dorothy that hot?” she gasped with delight.

“Seeing you feast on her clam with that arrow sticking out of her? Now THAT was hot!”

“She tasted wonderful, darling. I could feel her life ebbing away as she gave me her last orgasm. It was incredible… truly delicious! In fact, I think I’ve got to have more!”

“Then more you shall have,” he told her as he squeezed the last of his cream out onto her tits. 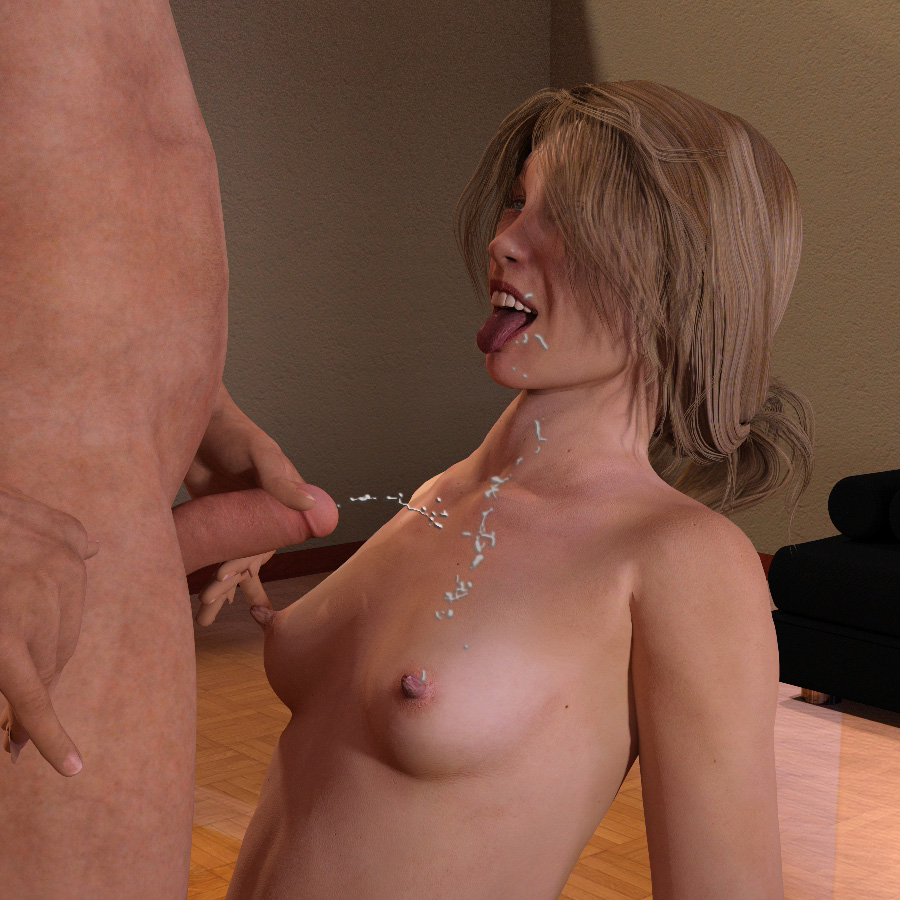 Mike picked up Dorothy and carried her into the bedroom. He laid her corpse out onto the bed. Sandy threw herself on top of her, mashing her cum-covered chest all over Dottie’s crotch.

She rubbed herself all over, smearing Mike’s cream onto Dorothy’s body. Then she began licking it off. Mike went around to Dorothy’s head where he tipped it back and thrust his cock between her lips.

Sandy threw herself into licking Mike’s cream off Dorothy’s body, especially out of her crotch, as he fucked her mouth. He thrust harder, causing Dottie’s naked body to rock. The movement almost made them think she was still alive, heightening their sense of arousal over the whole damned thing.

Sandy feasted on the dead muff as Mike took full advantage of Dorothy’s warm, willing lips. He shoved his cock all the way in. She seemed to have no trouble with it totally filling her mouth and going down her throat.

Sandy groped and fondled Dottie’s still warm mounds. She couldn’t help reverently caressing the shaft still sticking out of her chest. Then she began singing that song again… “’Cupid, draw back your bow… and let your arrow go… straight to my lover’s heart for me… he shot her for meeee…’”

Mike grinned at her as he leaned forward. They kissed each other, the shaft of the arrow pressed between them. They ended up enjoying Dorothy’s corpse all through the night.

This entry was posted in Dorothy and her friends, Picture Stories and tagged female sex, nudity, pictures. Bookmark the permalink.