One orgasm too many

Adele was restless. She was exhausted, but she couldn’t seem to nod off. It occurred to her that a good orgasm might help her fall asleep.

She thought about calling her boyfriend. But it was late. As much as he probably would have been willing to come over, she didn’t want to disturb him at this hour, especially if he was already in bed.

Wearing only her nylons, she walked to the kitchen and got herself a glass of water. She was careful not to drink anything that might keep her awake. She knew better than to consume any caffeine.

She walked back through the house, pausing to look at the dining room. Her eyes drifted upward to the hook in the ceiling. Normally it contained a dangling plant. But that was before she’d enjoyed that recent session with the noose.

Adele studied the hook, remembering the orgasms from last time. She’d damn near strangled herself. But the orgasms had been fantastic. What’s more, she’d fallen asleep barely a minute after her head had hit the pillow.

Adele found herself going to the closet and retrieving the noose she’d used from last time. She went back to the dining room, pausing to collect the wooden stool. Something told her this might not be the smartest idea, especially after last time. But she just couldn’t sleep.

She climbed the stool and threaded the rope through the hook in the ceiling. Then she leaned into it, testing her weight. The hook seemed solid as before, not that she intended to strain it that much.

Adele looped the noose around her neck, snugging it up tight. She left the other end dangling free. Then she started touching herself all over.

She imagined she’d been condemned to hang naked for her crimes in medieval France. It was probably because she’d fucked someone she wasn’t supposed to. It gave her some nice tingles as she thought about it.

Adele grabbed the loose end of the rope. Then she gave it a pull. Her tingles increased as she partially strangled herself.

She worked her button as she tried to choke herself. It felt pretty damned good. But she wanted a little bit more.

She looked up toward the ceiling, studying the hook. Then she removed the noose from around her neck. It was time to carry things just a little bit further.

She tied the rope off, adding a sense of danger to her play. Then she climbed back onto the stool. She had to stretch upward on the balls of her feet in order to loop the noose back around her neck.

Adele touched and fingered herself as she felt the coil tighten around her throat. She bent her knees a little, adding some strangulation to her play. It gave her pussy an urgent tingle.

Yup; this was going to work just fine. It was just what she needed to tire herself out. A couple of orgasms, and she’d be out like a light.

Adele thrust a couple of fingers into her dripping slit. Now she was sufficiently aroused. It felt wonderful, imagining herself condemned to death by suffering through a painful strangulation in the noose.

Adele reached up and carefully worked the noose off from around her neck. Then she climbed down off the stool. She had something in mind that should help give her a more impressive orgasm.

She tightened it until it felt nice and snug. The tingles returned in a rush. This time she was sure the orgasms would sufficiently exhaust her.

She turned on the toy and began vibrating it back and forth across her swollen nub. It made her inhale sharply. Her pussy dripped as she gasped and moaned.

She could feel the first one rapidly approaching. She bent her knees, allowing the noose to tighten around her throat. The asphyxiation was enough to set her off.

She shuddered in orgasm, wincing with pleasure. Then it passed. She stood erect, panting loudly for breath.

She only paused a moment before attacking her clit again. Once more she rubbed the toy back and forth over it. Then she dutifully bent her knees, imagining she was hanging for the crime of fucking the king’s son.

The noose tightened as her pussy dripped and throbbed. Adele edged for as long as she could hold it back. Then she shuddered again as another orgasm swept through her.

She stood upright, panting heavily for breath. Now the noose felt uncomfortably snug. One or two more and she would get down, go to bed, and be off with the fairies in blissful slumber.

She gasped and moaned as she writhed upon the stool. Once more she bent her knees, allowing the noose to gloriously constrict around her throat. The asphyxiation was intoxicating.

She rasped as the noose tightened. A moment later she shuddered hard in orgasm. Damn; that had been a good one!

Now she was getting tired. But she loved the orgasms generated by the toy and the rope. She figured one more ought to just about do it.

She slid the sex toy up into her slit. The vibrations drove her half-mad. It felt absolutely wonderful!

‘One more,’ she told herself as she tried to catch her breath. That one had felt so good that she wasn’t ready to stop. Just one more orgasm.

Adele felt the discomfort from the tightened noose around her neck. She moved her feet to ease the strain as she started to slide the toy back inside. That’s when her foot slipped on a slick spot on the stool. 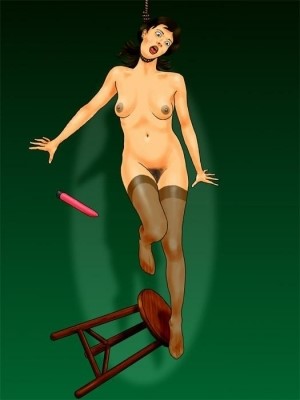 In an instant, the noose took her full weight. Her throat was all but closed off. Her eyes flew open in surprise at the situation she found herself in.

Her feet kicked as she searched for the stool beneath her. But it was lying on its side. She couldn’t reach it with her toes.

Without even thinking, a hand went down to finger her button. She was on the verge of a massive orgasm. She couldn’t breathe, but she was so damned close!

Adele shimmied and shuddered as her knees jerked upward. It had the unfortunate effect of tightening the noose until it closed off her throat. Her last orgasm was so powerful that it battered her senseless.

Her arms dropped to hang limp at her sides. She found herself struggling to regain consciousness, and her vision was failing. She couldn’t feel anything beneath her hips anymore.

Muscles fired as her arms twitched haphazardly. Adele tried to reach up for the noose around her throat. But her hands refused to function.

She sensed more than felt her bladder giving way, urine dribbling onto the dining room floor. She had a mess she was going to have to clean up in the morning. But she was so tired. Why couldn’t she breathe??

For a brief moment she had clarity of mind. The last thought that went through her head was, “Uh-oh. Maybe I shouldn’t have gone for that last or—” Then consciousness faded away as she gently swayed and twisted in the noose.

2021 (written April 14 ’21 by riwa. Inspired by the cartoon I found and included as an illustration.)

This entry was posted in Asphyxia Stories and tagged hanging, nudity, sex toys. Bookmark the permalink.