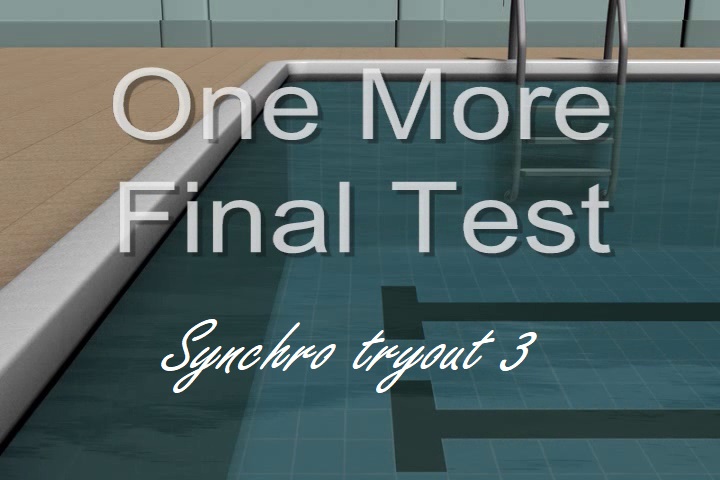 Cyndi Jacobs skulled at the surface of the pool in the deep end. She waited patiently as she got her breath back, expecting to be called back down. But there was no command from assistant coach Rick Riley over the underwater sound system.

Her body thrummed from her recent orgasm. She’d just experienced it while being upside down holding her breath on the pool bottom. She had even fingered herself for Riley’s amusement.

What was he going to make her do now? Had she earned a tryout in front of Coach Johnson? If Rick said a girl was good enough, it usually meant the appointment with the head coach was mostly a formality.

Should she break from skulling at the surface? She peered down into the water, trying to see into the observation window. But it was dark, revealing nothing.

Cyndi took a chance by doing a little practice routine. She skulled upside, holding her legs straight up as she held her breath. Then she allowed herself to descend.

She got enough of a look inside the observation window to see the room beyond was empty. There was no sign of Coach Riley. Where the hell had he gone? That didn’t mean her tryout with him was over, did it?

She slowly did a roll as she headed for the surface. If he was watching from somewhere, she wanted him to think she was serious about this tryout. Then she came up and took a breath.

“What’s the matter, Jacobs? Can’t get enough of holding your breath?”

She turned to see the assistant coach standing at the shallow end on the edge of the pool. She began swimming toward him. That’s when he barked, “Back to the wall, Jacobs! Swim to me underwater!”

‘Hardass,’ she thought irritably as she turned and swam back to the wall. She filled her lungs and submerged.

Cyndi kicked off the wall and began pulling with her arms. She wasn’t sure Riley was giving her a tryout as much as he was using her for his own sadistic amusement. But she really wanted to make the Aquastars synchro team.

She looked up right before she reached the wall. It was a good thing she did. She almost ran into Coach Riley who was now standing in the water.

She came up panting for breath as he asked, “You like being underwater; eh, Jacobs?”

“Can you hold your breath long enough?”

“Yes, coach,” she nodded meekly. Being submissive was probably her best response. Any kind of smart remark might jeopardize her tryout.

He pushed down on her head. Cyndi was forced to her knees. She released a few bubbles as she settled in holding her breath.

Another forced breath-hold. Great; just great! Was this a tryout for the team or for his own personal, sadistic pleasures?

Cyndi decided she had nothing to lose. She really wanted to make the synchro team. If submitting to Coach Riley’s sadistic amusements got her there, then she was 100% committed to that.

As she held her breath, she could not help seeing a noticeable bulge in coach’s trunks. She was pretty sure it was all on her account. But she was not the least bit offended. If turning him on meant making the team, then by all means… bring it on!

She could feel the strain in her lungs. Cyndi began to lose bubbles out of her mouth and nose. Coach was really keeping her down a long time!

He suddenly let go of her head. Cyndi shot up gasping for breath. Coach pointed at the far wall and demanded she swim over and back on one breath.

Cyndi nodded as she inhaled deeply. Then she submerged. She launched herself off the wall, pulling with her arms.

It was not a long swim. But it was long enough after not getting enough surface time to catch her breath. She would have to prove to coach she was not a risk for shallow-water blackout.

She reached the wall, did a flip and then kicked off with her feet without surfacing. Cyndi made the swim back. But she could feel it in her lungs when she came up for a breath right in front of coach.

“Another breath-hold, Jacobs! Make yourself useful!” Then he pushed down on her head.

‘Make herself useful??’ Was that a command or a suggestion? Cyndi wasn’t sure.

She saw the tempting bulge right in front of her. It certainly couldn’t hurt her chances, could it? Was that what he was implying? Cyndi decided to chance it by working his trunks down.

She grabbed onto the erection that sprang free. Then she started licking the tip. She mouthed and played with it, deciding maybe it was her turn to tease him for a while.

His hands came off her head. He was no longer forcing her. Instead, a hand rested on her shoulder, gently pushing her down.

She licked the tip of the shaft, feeling his cock twitch in her grasp. Cyndi lustfully ran a hand over her left breast. Now she was getting somewhere! 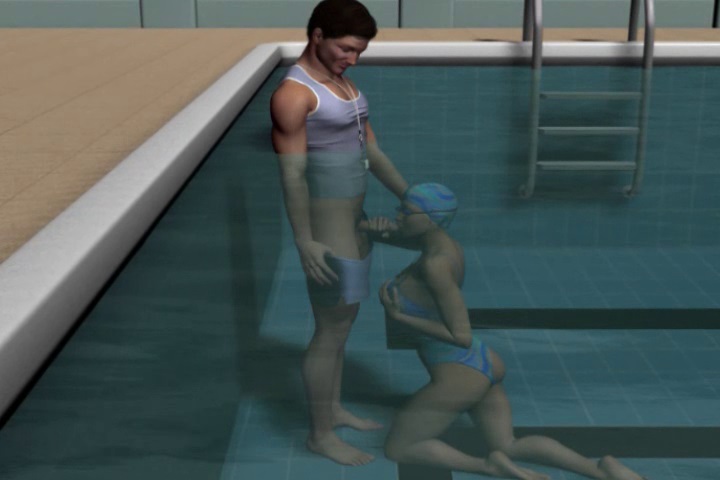 She could feel her arousal well up inside her. She didn’t mind so much being forced to “practice” like this. Besides, it was a lot easier than holding one’s position upside down while keeping one’s legs and toes ramrod straight. 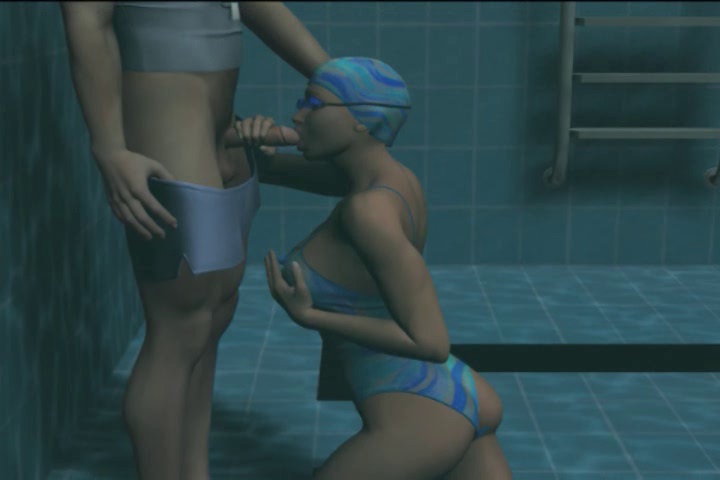 She stayed down while teasing him, using her lips and tongue without taking him into her mouth. She heard a sigh from up at the surface. It made her smile inwardly.

He suddenly jerked her up to the surface. “Another lap, Jacobs! Underwater to the wall and back!”

Cyndi filled her lungs before submerging. Damn him! Just when she was really making him twitch!

She made it to the wall and did a flip without surfacing for a breath. Her lungs were hurting when she got back. She burst up and gasped loudly for breath.

Cyndi submerged to her knees. Instantly she grabbed onto his exposed shaft. It had softened a little, but she knew how to take care of that.

She licked and nibbled, teasing him some more. She felt him twitch in her grasp. Now she had some sort of control over him, or at least a certain part of him. 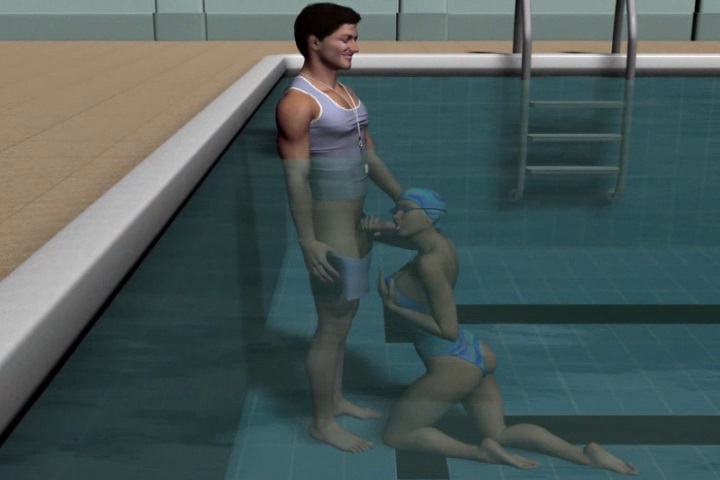 She licked and nibbled as she gently stroked him. He quickly became nice and hard. Now she was the one doing the “coaching”, training his little member to submit.

He tried to thrust a little. She just backed off. When he stopped thrusting, she went back to licking the tip of his shaft.

She delayed taking him into her mouth. He’d pushed her a lot this afternoon. She was bound and determined to get in a little payback of her own.

He looked down at her as she came off his erection. “Is that the way it’s going to be, Jacobs? Then give me another lap!” He was half-smiling when he said it. 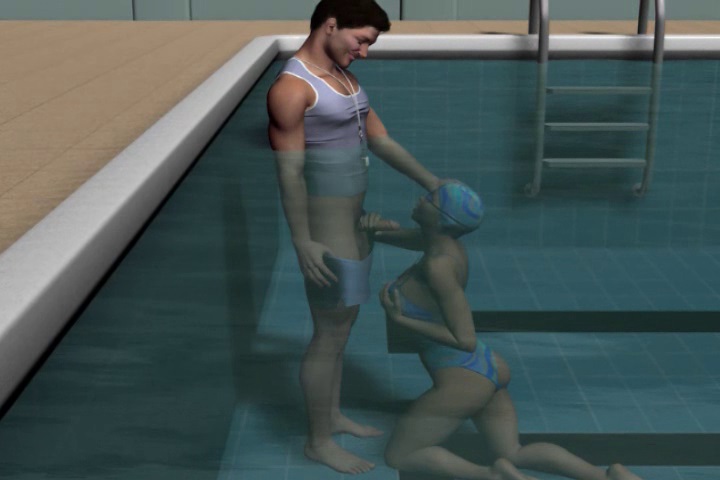 She popped up and gasped sharply. “Coach, I need to catch my…”

Cyndi crammed as much air into her lungs as possible. Then she submerged and kicked off the wall. Damned hardass!

She swam to the end, turned around and came back, her lungs straining the entire time. She burst up right in front of him, panting like crazy. She could see the look of frustration in his expression.

Cyndi could not help grinning a little. “Something funny, Jacobs?” Then he forced her below the surface.

Coach Riley grabbed her head. Then he thrust his cock hard between her lips. Cyndi gagged up bubbles as she took him deep, grabbing his ass to hold on. 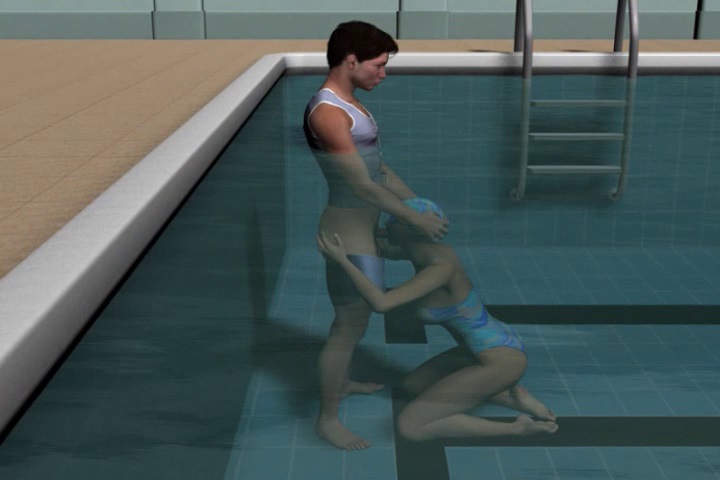 There would be no more opportunities to tease the assistant coach. Had she tried his patience a little too much? Cyndi wasn’t sure.

She applied suction as he hit the back of her throat. She could feel herself running out of breath. It felt like he was fucking the air right out of her lungs.

She tried not to release any more bubbles as he kept her submerged. The strain intensified in her chest. 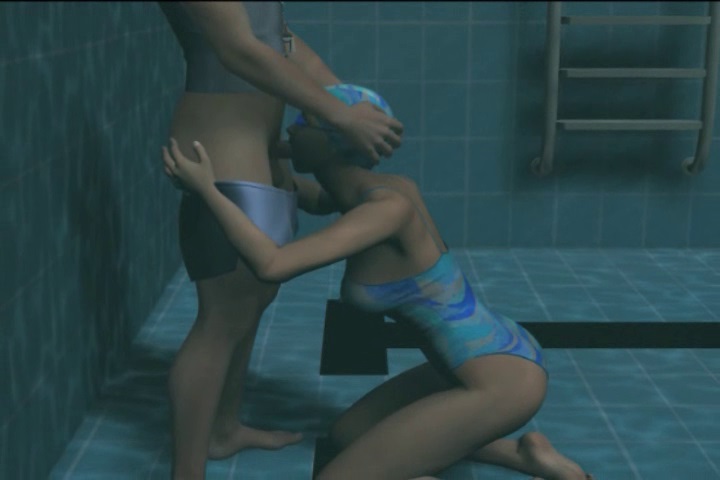 He suddenly pulled her head up out of the water. Cyndi came up gasping and sputtering. “Give me another lap underwater, Jacobs!”

She was not given much time to catch her breath. Cyndi crammed as much air into her lungs as she could. Then she submerged and kicked off the wall.

She made the turn and swam the return length underwater. She reached Coach Riley and burst up gasping for breath. He just forced her right back down, ramming his cock deep down her throat.

Cyndi grabbed his ass and accepted his meaty member. She could feel him thrust hard and deep into her mouth. She tried not to gag as he hit the back of her throat.

She hadn’t gotten much of a breath after her swim. He was certainly pushing her pretty hard. Her pussy throbbed from the abuse he was putting her lungs through.

He pushed her back down onto her knees. Then he began ramming his dick down her throat. Cyndi glubbed up bubbles as she grunted from each thrust.

She grabbed onto his ass and held on. She was going to ride this out all the way to the end. Coach was going to learn she was fully committed and would do whatever it took. 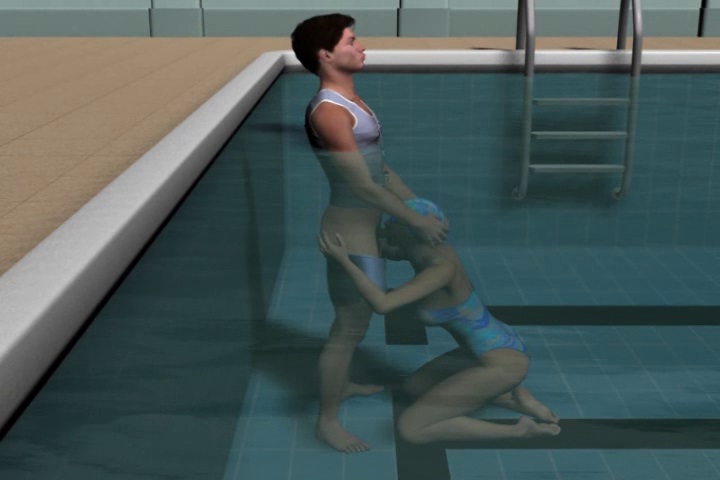 He pulled her up for another breath. Cyndi gasped loudly. “Gimme another lap, Jacobs!”

Cyndi frantically filled her lungs. She swam the length of the pool, hit the wall and made the return on one breath. He was not giving her any chance whatsoever to catch her breath.

She had barely returned and was gasping aloud when he forced her back down onto her knees. He pumped her mouth good and hard until she felt him start to swell between her lips. It filled her with a surge of excitement despite her heaving lungs.

It started jetting into her mouth. Cyndi kept it all inside as she moaned with excitement. Then she slowly pulled off his dick.

She looked up at him and opened her mouth. His cream swirled out as she caressed her breast. Then she smiled as if to say,” How about that, coach?” 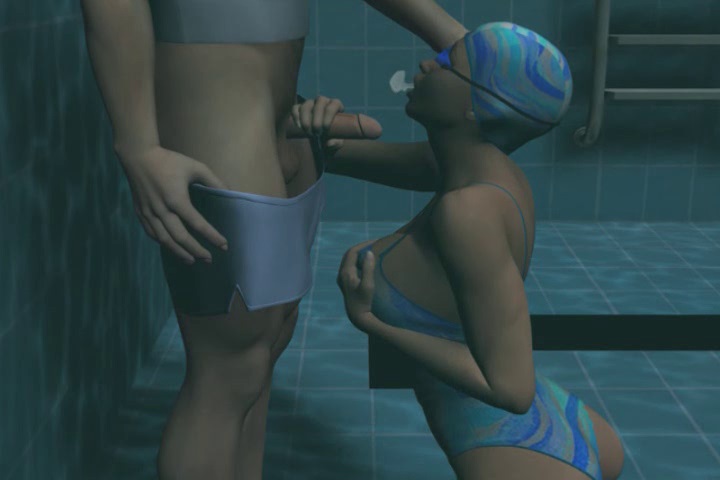 She stayed down for as long as she could. He pushed down on her head until she was losing her breath in huge bursts of bubbles. Then he pulled her head up.

She gasped aloud as he pulled his trunks back up. “I’ll be talking to Coach Johnson later today, Jacobs. I think I’m going to tell him I found a new girl who shows all the marks of an eager teammate, willing to do whatever it takes.”

“Thanks, coach,” she panted with a smile.

She watched him climb out of the pool. He got a towel and dried himself off as much as possible. Then he left her alone in the water.

She swam to the deep end where she took several deep breaths, preparing for a long one. Then she submerged. Cyndi went all the way to the bottom.

She flipped herself upside down and then hooked her feet in the ladder. Cyndi Jacobs furiously masturbated. She was desperate for a release as she worked her crotch.

It wasn’t long until she experienced a celebratory orgasm for earning a place on the team. It left her feeling weak and wonderful. That’s when she decided to head back to the surface and call it a day. 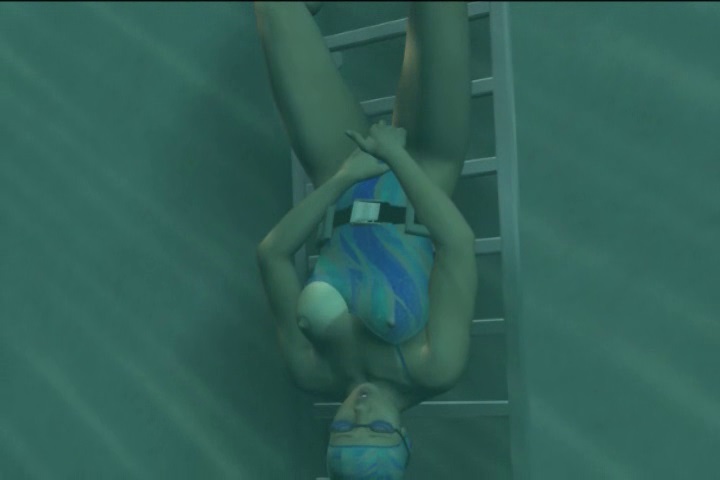