Querida and Xenia were freshmen at City U. They were also members of the P.O.R.N. sorority. Essentially they had licked their way into becoming members.

They quickly became roommates as well as the best of friends. It wasn’t that they didn’t like boys. It was simply that they liked girls more. Thus, their services were often provided to the other sorority members.

The two freshmen spent many nights pleasuring each other. They did it so often that the house mother had to remind them they were required to spread themselves around a little more, especially with members of the nearby fraternity. They frequently made arrangements so they could be together in the same room licking, sucking and fucking.

At first they didn’t tell any of the other sorority members about their enthusiasms. Otherwise they were afraid they might become too much in demand and be forced to spend less time with each other. They were selfish that way when it came to wanting to be alone with each other.

They often choked each other while lying on top of each other as they mashed their pussies together. Frequently they would climax together until passing out at virtually the same time. Their orgasms were always intense.

From choking they graduated to the heavier stuff, starting with strangling each other with a red ribbon they had obtained. Querida loved watching Xenia’s eyes roll as she cut off her air with the ribbon. Grinding her pussy against that of her roommate always got Querida off each time Xenia passed out.

Querida loved being strangled while Xenia was eating her out. But it was hard for her roommate to pull on the ribbon while focusing on eating clam. So Querida took to wrapping the ribbon around her own neck and then pulling tightly. Xenia always got a gush of fluids in her mouth whenever Querida strangled herself to unconsciousness.

After supper they went straight to their room where they quickly got naked before munching down on each other for dessert. The red ribbon soon came out and made its presence felt. The roommates took turns strangling each other, leading to a couple of juicy orgasms to start the night off right.

From there Xenia went and retrieved some Saran wrap. She used it to erotically cover the face of Querida as she lay on her back on the bed. Querida shuddered hard in orgasm, her eyes rolling as she was suffocated into unconsciousness. For Xenia it was quite a thrill.

It was getting late; the guys would soon be returning. Xenia suggested they up the ante before they headed over. She suggested they retrieve the noose the house mother kept in a cabinet down on the main floor.

Querida was more than agreeable, although she was curious what her roommate had in mind. Xenia went to “borrow” it from the cabinet. She knew where it was since the house mother was known to occasionally string girls up for a few moments who were less than enthusiastic about fulfilling their role as a Pi Omicron Ro Nu sorority girl.

When Xenia returned with the rope they removed the hanging light fixture above the bed. They threaded the rope through the eyebolt and tested it. It was strong enough to hold each one’s body weight so long as they were careful about it.

Xenia wanted to try it first. The freshman eagerly straddled her roommate’s face before looping the noose around her own neck. Querida reached up and groped Xenia’s mounds while licking out the dripping twat of her chocolate lover.

Xenia was wonderfully strangled. It did not take long before she shuddered hard in orgasm, spraying her fluids all over Querida’s face. Querida thought that was incredibly hot.

They checked the time and realized the boys would soon be back. But Querida wanted to experience a turn of her own. They switched places so she could noose herself up before eagerly straddling Xenia’s head.

Xenia went right to work, licking and slurping up her roommate’s dripping fluids. Querida climaxed hard as the noose deliciously strangled her. Xenia nearly had an orgasm of her own witnessing the way the noose made sweet love to her kinky roommate.

Xenia went right to work licking and slurping her roommate’s juicy twat. Querida groped her own breasts as her roommate chowed down on her wet cunt. The orgasm that was headed Querida’s way promised to be deep and profound. 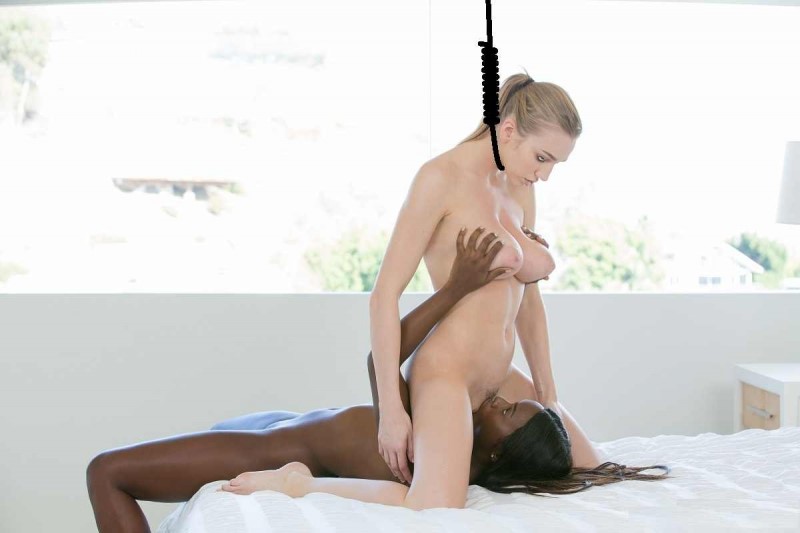 Querida did not notice how tight the noose had become. Her orgasms had dulled her senses. She kept slipping in place, tightening the noose as she shuffled around to further adjust her position.

Xenia licked and slurped like a woman possessed. She knew how to use her tongue to make any woman pop off in ecstasy. The dazed look in Querida’s eyes only made the juices to her own cunt flow.

Querida kept hitching as the flow of oxygen was cut off to her brain. Xenia’s eyes started to roll from her own orgasm as well as lack of air. She got so weak she could no longer reach up and squeeze her roommate’s wonderful mounds.

A half hour later Spike and Joey came up to their room. They’d been sent up by the house mother to “get those two bitches out of their room and fuck the shit out of them!” If the girls would not come out, the guys were instructed to fuck them right there in their room.

The guys walked in an on incredible scene. Querida was noosed, her creamy body straddling Xenia’s head. Her eyes were lifeless and glazed over. Drool spilled out of her mouth onto her tits.

Xenia’s mouth and nose were completely covered. One hand was still buried in her wet pussy. She was looking up with a strange, vacant expression as though she’d orgasmed herself into eternity.

Spike looked at Joey who looked back at him and shrugged in amazement. Spike finally asked, “Shall we go down and tell Laura these two won’t be coming down from their room?”

“She told us to fuck the shit out of them, didn’t she? Does it really matter if they’re alive or dead? Hell, I’ve always wanted to fuck a sexy corpse!”

Joey started pulling down his pants, removing them completely. Spike removed his as well. He eagerly stepped between Xenia’s legs. Then he thrust his cock inside for a taste of some sweet necro chocolate.

Joey eagerly climbed up onto the bed. He grabbed Querida’s head and held it in place. Then he thrust his hard dick between her parted lips.

The frat boys eagerly began the task of sexually enjoying the two dead, sexy roommates. The fact they were deceased didn’t make them any less enjoyable to play with.