Evelyn didn’t know much about Vincent, other than the fact he was extremely handsome. The girls at the college instantly became jealous of her relationship with him. They also became very catty around her.

He took a great deal of interest in her. He seemed especially smitten with her ass and thighs. Evelyn floated on a cloud every time he was in her presence.

He was not the least bit sexual with her. He didn’t even offer her so much as a kiss. But she could tell he was smitten with her. It made her want to marry him all the more.

She was thrilled when Vincent invited her to fly back with him to the old country to meet his family. She was sure that would mean she’d have a ring on her finger when they returned. She also suspected his family had loads of money. Evelyn began to envision a long, happy life with him.

From the airport, a chauffeur drove them to a large mansion. Evelyn was thrilled. Now she was certain her beau’s family had a great deal of money. She was going to do well for herself… and to hell with all those bitches back at college.

His parents seemed charming enough. But there was something about them that didn’t make her feel right. They looked upon her with an enthusiastic zeal that made her a little uncomfortable.

His grandparents were worse. They looked downright creepy. What’s more, they touched her all over as though they were inspecting a piece of meat.

His aunts looked like old maids, although they definitely seemed to approve of her. Evelyn wondered if there had ever been a time in their lives when they’d looked pretty enough to snag a man of their own.

There was much imbibing of the grape that night. The family was all gathered together in the parlor. They were all aglow as they discussed dinner plans for the next day.

Vincent regaled them all with how he’d met Evelyn. He kept saying how perfect he thought she looked. It made her blush with pride.

Once more she felt that discomfort settle in. Everyone acted as though they really liked her… perhaps a little too much? They were so enthusiastic that at times it creeped her out.

They kept plying her with more wine. Evelyn tried to be careful not to imbibe too much. But her nervousness over the family’s attention to her made her want to drink more to dull her unease……

Evelyn groggily awakened. Clearly she’d enjoyed way too much wine last night. When had she passed out?? She hoped she hadn’t done anything to embarrass herself.

She didn’t remember having been taken back to her bedroom. But she was clearly undressed. And she was uncomfortable as hell.

She felt dizzy and disoriented. Where the hell was she? She tried to look around, but she couldn’t seem to move any of her muscles.

She dimly became aware of an apple in her mouth. Now whose idea of a practical joke had that been?? Had it been one of the aunts? Then she realized she was all hunched over on a table.

Fragments of memory began to return. She vaguely remembered the family rising up and drawing closer to her. Clammy, disgusting hands had helped remove all her garments.

There were memories of being groped and pawed. It hadn’t felt sexual, although she remembered her breasts being squeezed and her slit being fingered. But she was sure Vincent hadn’t made love to her last night, much as she would have loved it.

There were more fragments of memories about last night… disturbing memories. She remembered climbing up onto the large dining room table. Had she danced like a drunken fool?

The hands had returned as she’d crouched on the table. Evelyn vaguely remembered snippets of dialogue… something about how tasty she would be? She’d thought it was just a quaint expression of being a welcome addition to the family.

Uncomfortable sensations brought other, more unpleasant memories. She remembered one of the aunts stuffing vegetables up her pussy. It had been arousing, yet humiliating. Strangely Vincent’s parents hadn’t seemed to mind.

She tried to squirm, but she still couldn’t move. Her pussy felt full. Were those damned vegetables still inside her?

A new sensation came to her, one of something having been shoved up her ass. It felt huge and disturbing. She wanted to poop it back out, but it felt like it was firmly stuck inside her. 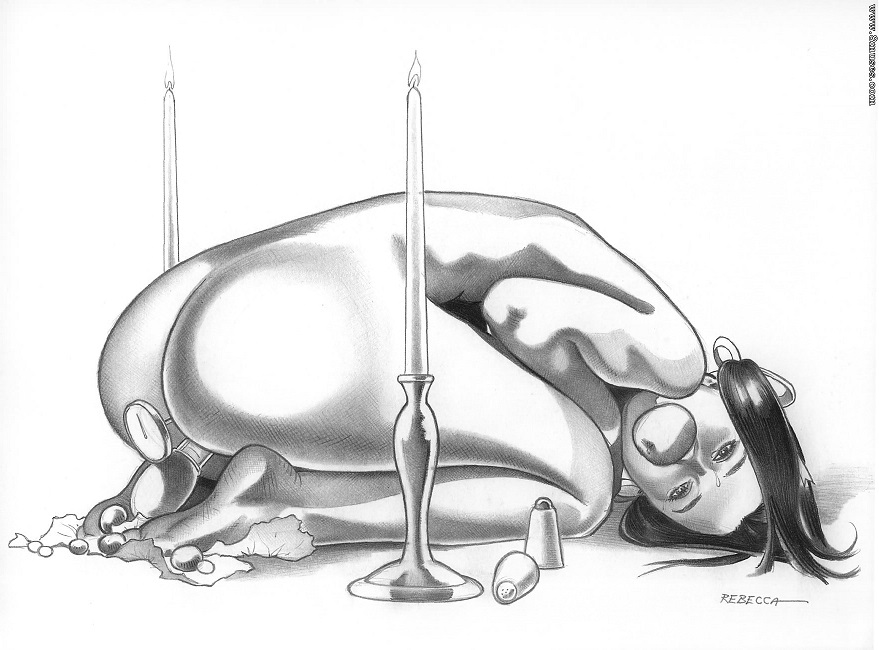 Evelyn heard footsteps approaching. Was the family coming?? Oh no! She didn’t want to be seen naked, certainly not like this??!!

The whole family came in and stood around her. My gawd; she was still on the dining room table! Hands lovingly touched and caressed her. Then she saw Vincent.

She tried to speak, but the apple prevented speech. All she could manage was a whimper. She pleaded with her eyes for him to do something.

“Yeah, Vincent!” one of the aunt’s gushed. “I can’t wait to try her cunt steak!”

“I’m looking forward to a bite of her ass and thighs,” Vincent said lovingly as he rubbed Evelyn’s bare bottom.

“Let’s get her on to roast, son. We want her ready to eat by this afternoon. She’ll need all morning to cook.”

Evelyn was horrified. A single tear trickled down her cheek as she was shifted over onto a very large metal platter. Then Vincent and his father carried her off.

She was taken to the kitchen. It felt quite warm in there. That’s when she noticed an incredibly large stove along one wall.

“Get the door, mother,” Vincent said cheerily. His mother smiled as she went over to comply. Then she pulled it open. Evelyn was hit with a blast of heat.

“Ease her in gently, son,” Vincent’s father advised. Evelyn tried to scream at the suffocating heat. But the apple in her mouth muffled her cries.

The heat was beyond anything she’d ever felt before. Then the oven door was closed, sealing her in. Evelyn kept screaming over and over in her mind, her tears evaporating until she finally, mercifully succumbed from the heat.

Vincent would later admit that hers was the best ass he had ever tasted.

This entry was posted in Uncategorized and tagged cannibalism, nudity. Bookmark the permalink.