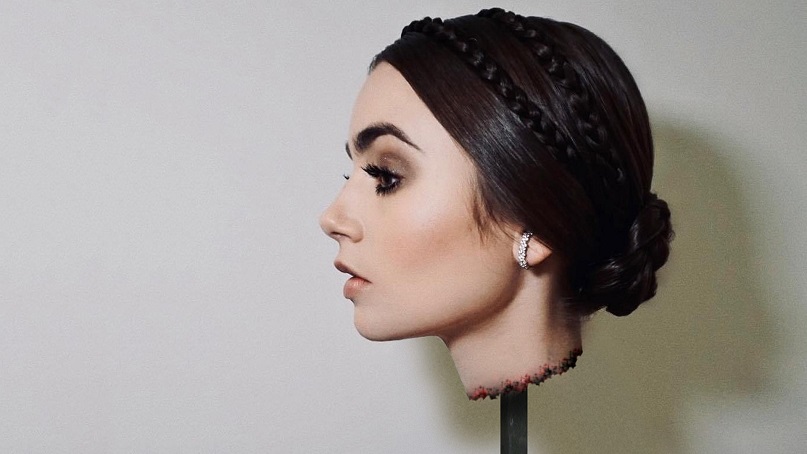 The disease would soon ravage her body. The doctors gave her weeks. The evidence of her impending demise would soon appear on her face.

She realized her beauty would be forever lost. She’d spent thousands and thousands of dollars on her appearance. Was that great investment all for naught?

In a panic, she made arrangements to meet with Thor. It was said he could preserve a woman’s fading beauty for many years to come. But there was a high price to be paid.

She showed up at his studio and explained her dilemma. He spoke not a word as he led her to a back room. She was shocked when she saw the axe and bloody tree stump. Others had clearly used his services.

She looked at Thor in disbelief. Then she pondered the matter. A moment later she told him, “Give me a moment?”

She slipped back into the main studio where she took some time to prepare her face. She tied her hair up into a bun. Then she returned.

She looked at Thor who gave her a questioning look. Then she knelt down in front of the tree stump. She was sure this was the only way.

In resignation, she stretched her neck across the stump. “Make me beautiful,” she stammered with tears in her eyes. Then she took a deep breath and waited.

She detected movement. But she did not know how to prepare. How did one ready oneself for the moment of beheading?

The axe came down without warning. One moment, her neck was stretched across the stump. The next, her head bounced and rolled to a stop.

She lay on the side of her face, blinking in surprise. Thor reached down and lifted her head up. She tried to look into his face, mentally pleading, “Please make me beautiful!” Then the life faded from her pupils.

Thor went to work on plastinating the head. When he was finished, he put it on a pike. He was proud of his efforts. Lily’s face would remain beautiful for many years to come until the passage of time eventually worked its terrible toll despite his best efforts. 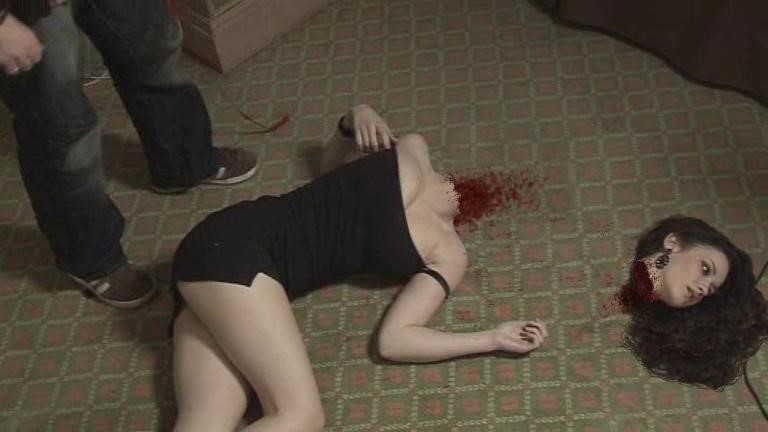 I really loved Luella. She had beauty and brains. I knew she’d been around the block a few times. But she said she loved me and wanted to settle down.

I didn’t want to rush things with her. So I tried to take it slow. But she made it so difficult the way she poured on the charm.

After a week we were having sex. After a month she moved in with me. After three months we were married.

Everything was good for the first six months, or so I thought. Then the sex died off as Luella took a night shift to help make ends meet. She said she liked the hours and that she was a night owl in contrast to my having to get up early to go to work every day.

I started getting friends asking if we were having marital problems. Apparently Luella was being seen in town late at night in a certain location. It seemed the night shift she was working was not what she’d told me it was.

I asked her about it and she blew up at me. She said she had to work because I wasn’t making enough money. I told her she knew that when we were first married. She responded by saying it wasn’t acceptable anymore.

Her harsh reaction was unexpected. So I asked my friends where they’d seen her. Apparently she was moonlighting at a strip club.

One night I went to find out for myself. Sure enough, I saw her dancing a stripper’s pole naked in front of everybody. After her set she got me alone and told me to get the hell out and not to bother her while she was at work. Supposedly that was to be the end of it.

I thought once her secret was out we would have a sit-down conversation. All she said was she had to do it to help make ends meet. When I asked her where the money was as I hadn’t seen any she told me to fuck off.

It wasn’t long before word got back to me she was sleeping around. When I first confronted her with it she denied it. But when I got some proof she told me she was doing the best she could and to lay off and get another job.

That wasn’t all she did. She started belittling me every chance she got. She said I wasn’t man enough for her anymore. She told me the sex sucked so bad she was getting it from real men who treated her nicer.

I couldn’t believe it! I told her I busted my ass for her. She told me I was pitiful and that a real man would be bringing in good money.

Things got much worse after that. She began coming home smelling of sex. She barely tried to hide it. When I complained she told me I could lick her cunt clean as that was all I was going to get because that was all I was worth to her.

I offered to divorce her, but she didn’t want one. She said she would take a worthless bastard like me for every penny I had. I’d have to work morning, noon and night for the alimony she deserved.

I asked her if a judge would believe me or some slut who worked a stripper pole and fucked around. She countered with the claim she could get one of her stripper friends to testify I’d raped her. Then she smiled as she asked, “How do you like them apples, asshole?”

I felt trapped; I didn’t know what the hell to do. I asked the advice of a couple of friends, but they didn’t know either. They said she’d become quite the bitch and that they’d heard she was like this before we married. Apparently she’d done a damn good job of hiding her past; either that or I was just too damned infatuated to see the red flags.

It got to the point where she didn’t even bother trying to hide her affairs anymore. She would dress up and go out while I would try to fix a nice dinner to woo her. She wasn’t the least bit interested. Now she was having her cake and eating it too. And I still hadn’t seen a dime of any of that money she was supposedly bringing in.

One night I decided I was going to fix her a nice dinner so we could try to have a rational conversation. At first she’d agreed, saying a dinner inside would be nice so long as I didn’t burn anything. Hell, she knew what kind of a good cook I was!

I was in the middle of fixing a special dish – chopping meat and vegetables with a cleaver – when she got a call on her cell phone. I asked who it was, but she just smiled and told me I didn’t know him. Then she went to the bedroom.

When she came out she was wearing this black outfit, earrings and perfume I knew wasn’t at all what she’d planned to wear for me at the dining room table. “I just got a better offer,” she sneered with contempt. “I’m eating out tonight. Don’t wait up. Oh wait; maybe you can clean my cunt with your tongue when I get back. So stay awake for that; ok, asshole?” The disdain on her face cut me to the core.

I slammed the sharp tip of the cleaver into the cutting board, making her jump. But I’d had enough. In a low voice I growled, “Lou, you’re not going anywhere tonight. I’m making you a nice dinner and you’re doing to sit down at the table and you’re going to damn well eat it and then we’re going to talk things out.”

“There’s nothing to talk about, asshole! We already have the arrangement just the way I like it! You pay the bills and keep your mouth shut and be happy about it! Or do you want me to call my stripper friend?”

“You don’t have any friends!”

“Oh, yeah? You think I won’t do it?” Then she picked up her cell phone on the counter and punched in a number.

I was seething as she smirked at me. “You think I’m bluffing, don’t you! Hell, you’ve had this coming for a long time now!”

I heard someone answer on the other end. She gave me an evil grin as she said, “Hello, Marlene? You remember that little favor I’ve been meaning to ask you? Well now’s the time.”

In a fit of anger I scooped up the meat cleaver. I was too angry to speak. Blinded by rage I swung just as hard as I could.

There was a thump as Lou’s head fell onto the kitchen floor. Her hand dropped the cell phone as her body wavered for a couple seconds. Then she sort of collapsed onto the floor right on top of the damned thing.

I stood there panting heavily as I stared down at her. Her body kept jerking and spasming, her arms moving as though she was trying to reach for something. She had this shocked look on her face.

I thought I heard a faint voice asking, “Lou? Lou, are you still there? Lou, did we get disconnected?”

Numbly I reached down and picked it up. “Marlene, she’ll have to call you back.” Then I disconnected the call as I stared down at my beheaded wife, wondering what the hell I was going to do now.

Two things were evident. One: I was going to be eating alone that night. And two: Lou certainly wasn’t going to be able to make her date… 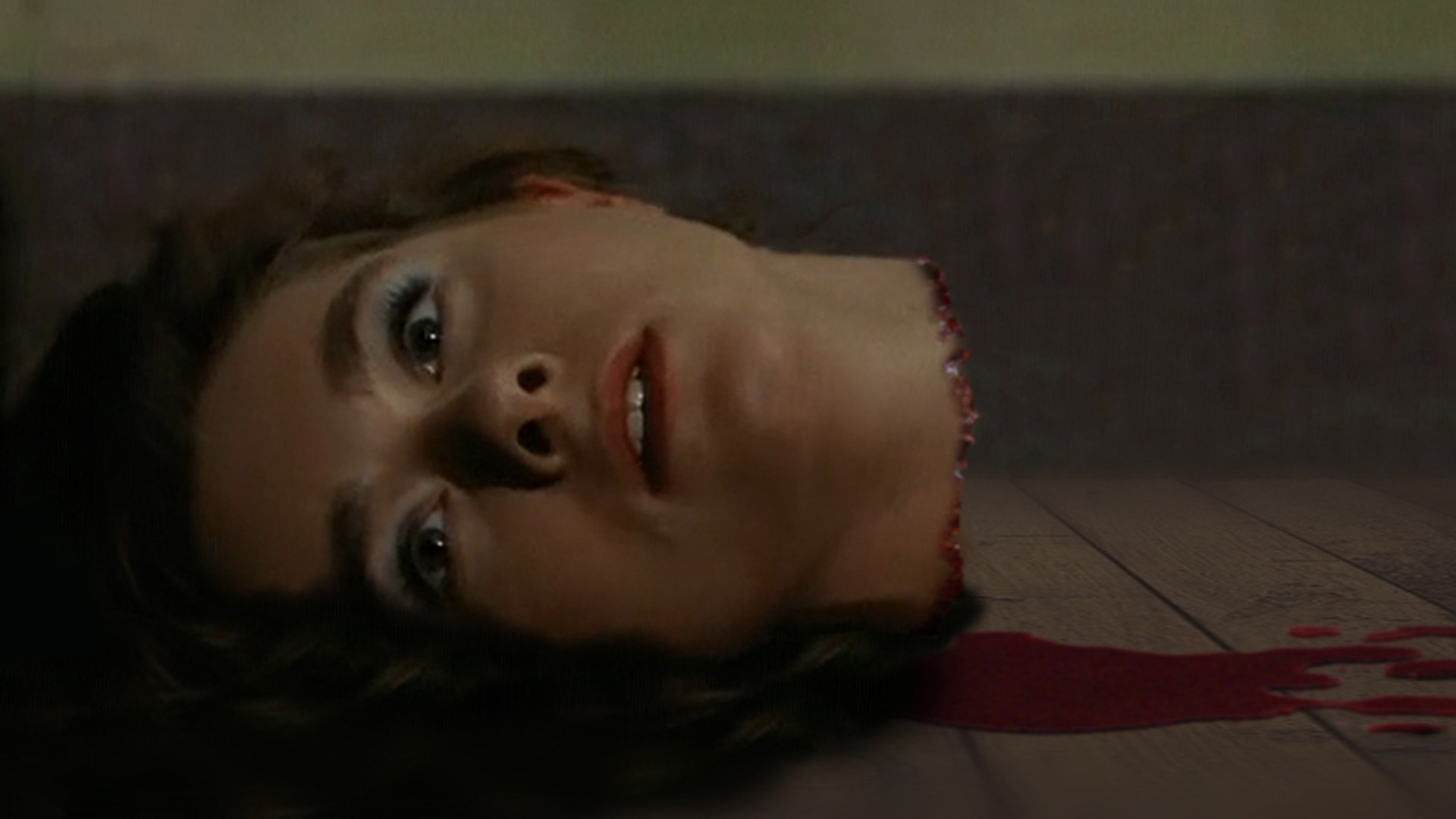 “I am the great Nemuri Kyoshiro, outlaw swordsman during the Edo period.”

“Robert, are you playing with that sword again?”

“I KNOW WHAT I’M DOING MOM! The great Nemuri Kyoshiro, sleepy-eyed ronin, faces 10 ninjas intent on destroying him under the orders of the Tokugawa shogunate.”

“How many times have I told you to sell that damned thing? Put it up on eBay; you’ll make some money on it! It’s too dangerous to have around the house!”

“I’M TAKING A FENCING CLASS MOM! I’M GOING TO BECOME A GREAT ACTOR LIKE ICHIKAWA RAIZO! The ninjas are no match for his full moon cut. One by one he cuts them down.”

“Damnit, Robert; you’re going to hurt someone if you’re not careful!”

I’M ALWAYS CAREFUL, MOM! After dispatching the ninjas, the famous Nemuri Kyoshiro begins the long journey to Kyoto. But he is ambushed by 15 rival ronin. His sword cuts through the air with deadly grace and precision.”

“Get in here, Robert; it’s dinnertime! Put that damned sword away! I’ve had enough of your foolishness! Next week I’m sending you off to the recruiter! Maybe the army will make a man out of you!”

“I DON’T WANT TO SERVE IN THE MILITARY, MOM! I WANT TO BE A GREAT ACTOR AND BE THE GREATEST SWORDSMAN IN ALL THE WORLD, JUST LIKE DOUGLASS FAIRBANKS SR. AND ICHIKAWA RAIZO! The assassins chase the sleepy-eyed ronin into an abandoned farmhouse. There he fights them off, dispatching each one with a wicked slash. One ronin fails to evade his deadly cut, and his head flies off.”

This entry was posted in Beheading Stories and tagged pictures. Bookmark the permalink.