It was Melicia Carr’s 26th birthday. Her friend Dolcetta decided to plan something special for her. So she invited her and three of her friends to come over, telling them she had a special night planned.

The girls arrived promptly at 7pm. Dolcetta proceeded to serve them all cocktails. It wasn’t long before the girls started to get all touchy-feely with each other. But that wasn’t unusual behavior for them as they were all bisexual.

After a while Dolcetta told them it was time to adjourn the party down to the aquarium. She had a special fish she wanted to show them. This got the girls to buzzing with excitement, wondering what their friend had planned for them.

She led them down the stairs and through a hall until they rounded a corner. The first thing Melicia noticed was that the aquarium was out of water. The second thing she noticed was that someone was chained inside. It was a young blonde in a pleated skirt and light green blouse.

She was hanging in mid-air from four sets of chains that were attached to shackles on her wrists and ankles. Another chain came down to a heavy belt around her waist, no doubt to keep her from drifting upward. Some sort of bridle filled the girl’s mouth, preventing her from verbalizing anything more than a few incoherent grunts. 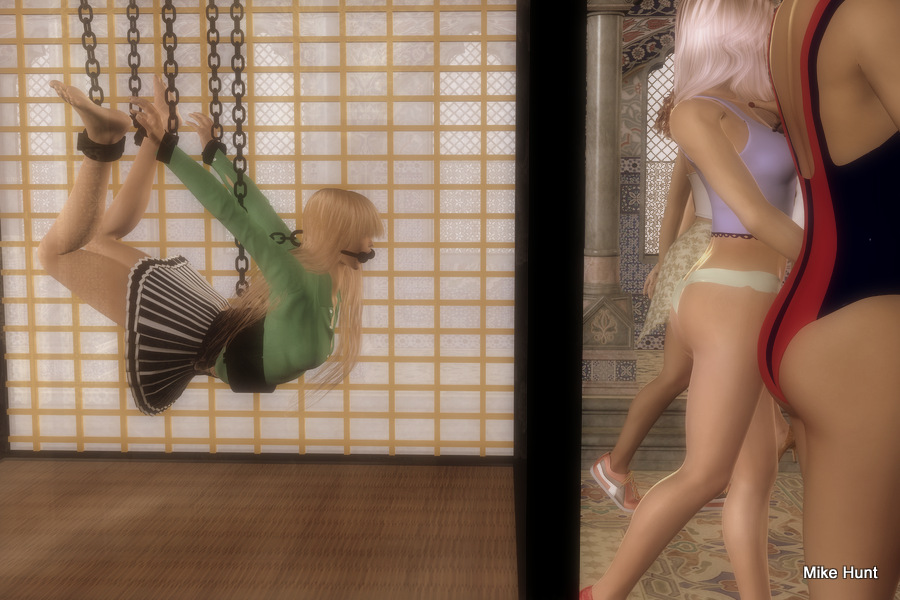 The girls all buzzed excitedly. “Who’s that?” Melicia asked as she peered into the tank.

“That’s one of the freshmen from Dolcett University,” Dolcetta told her with a smile. “Her name is Jocelyn. She’s sort of on loan for the night.”

“On loan?” the blonde Sela asked with a giggle. “What’s that mean?”

“It means we get to have fun with her tonight. But she’s got to be back in time for lunch tomorrow, if you know what I mean.” Dolcetta winked knowingly at them.

“What kind of fun?” Ruby wanted to know.

“I think I know,” Sela giggled, moving her arms as though she was swimming in mid-air.

Clarice was a little indignant. She told Melicia, “How come you get all the good presents?”

Dolcetta answered, “Because it’s her birthday, silly. Nothing but the best for my friends. When it’s your birthday we’ll do something special for you.”

For a moment the girls all buzzed amongst themselves as though forgetting their guest in the tank. Dolcetta finally got their attention. “Well, girls? I guess it’s time to fill the aquarium. This is going to be fun.” 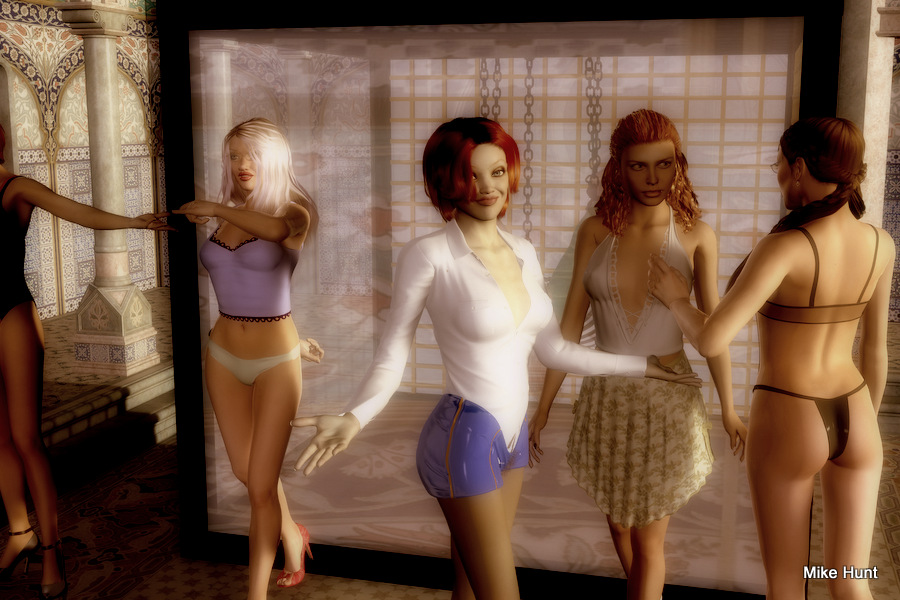 Jocelyn’s eyes widened in alarm. She’d heard everything that was being said. Now she began to wriggle in the chains as though she wanted out.

A moment later everyone heard the sound of running water. The aquarium was starting to fill. Jocelyn grunted anxiously as she struggled even more against the chains that held her fast.

It did not take long for the aquarium to fill. Soon it reached Jocelyn’s waist. It continued to rise until it covered her breasts. Her eyes opened even wider in alarm. 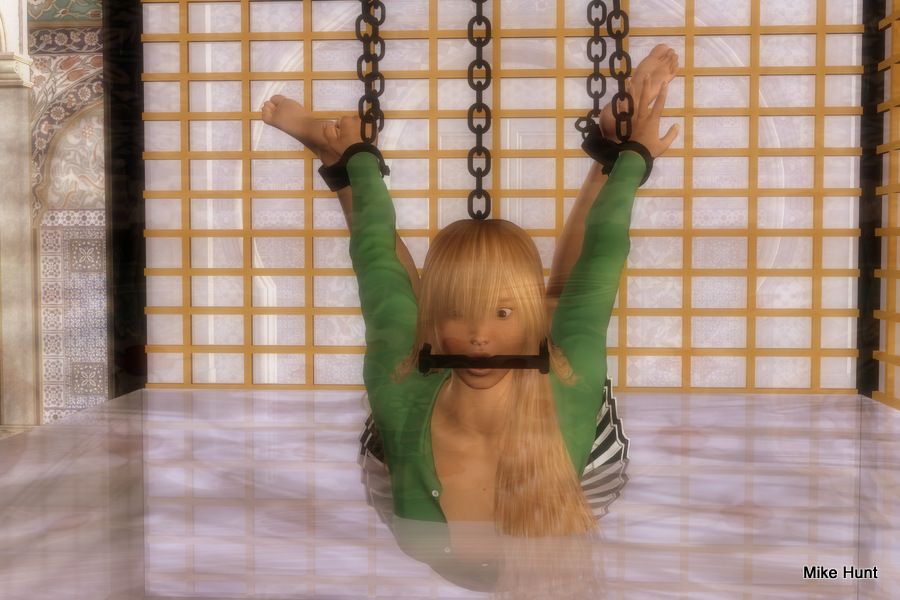 Dolcetta and her friends all watched in growing fascination. It was clear what was going to happen to the poor girl. But no one felt the least bit sorry. On the contrary, they were all looking forward to watching the sexy bitch drown.

The water rose surprisingly fast. Poor Jocelyn wriggled and squirmed from the cold water. Her nipples quickly hardened beneath her blouse.

“How long can you hold your breath, honey?” Ruby called out to her through the glass. “Gonna be under any moment now!” Clarice added. “Guess you don’t need to know how to swim for this one, baby!” Sela said with a chuckle. Melicia could only gasp with appreciation over the present Dolcetta was giving her.

“I told you it was a very special fish,” their host declared with a gesture.

Jocelyn was forced to take a deep breath and fill her lungs as best she could, considering she had that bridle contraption in her mouth. A moment later the water rose past her nose. It continued to climb until it was well over her head, reaching the shackles to her wrists and ankles as bubbles trickled out past her lips 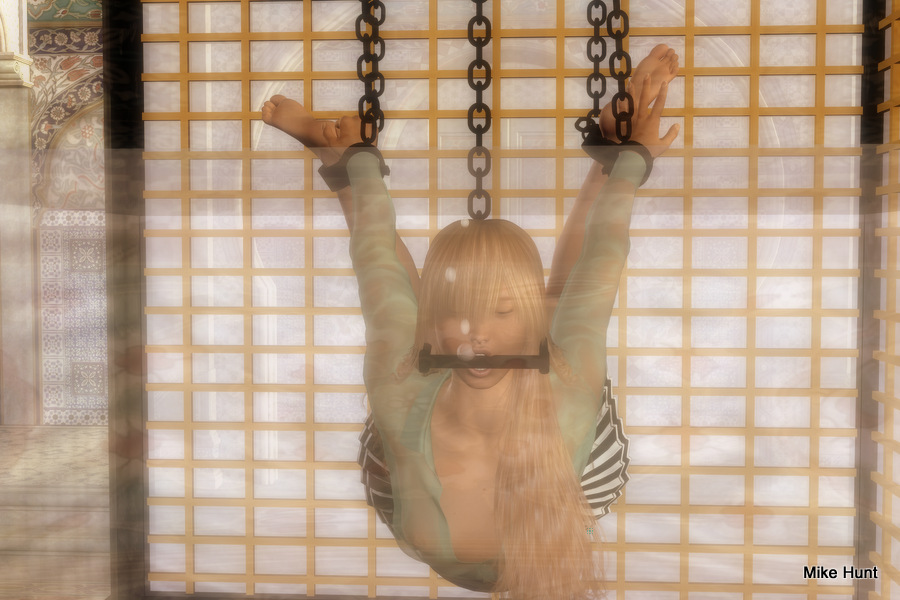 Well, girls,” Dolcetta asked with a grin. “What do you think? Can I throw a party or can’t I?”

“Damn, girl! This is hotter than hell!” Melicia was panting heavily for breath, fully aroused at the impending drowning to take place right in front of her.

Jocelyn struggled instinctively against the chains holding her in the tank. Her body did not drift upward in the slightest. Her skirt billowed as the water swirled around inside the aquarium.

She tried to hold her breath, hoping they would drain the tank as there was nothing else she could do. “I hear she tried out for the synchro team,” Dolcetta told her friends. “That means we might get a longer show before she drowns. After all, there’s no way in hell she can hold her breath forever.”

Jocelyn grunted as she set herself to swaying inside the aquarium. But the chains held her fast. Air slipped out through her opened mouth as the bar between her teeth kept her lips apart.

The unfortunate freshman in the tank held her breath for thirty seconds… and then a minute. “She’s really going to drown in there?” Ruby gasped with growing sexual excitement. “That’s so fucking hot!” Sela added as more bubbles escaped past Jocelyn’s parted lips. 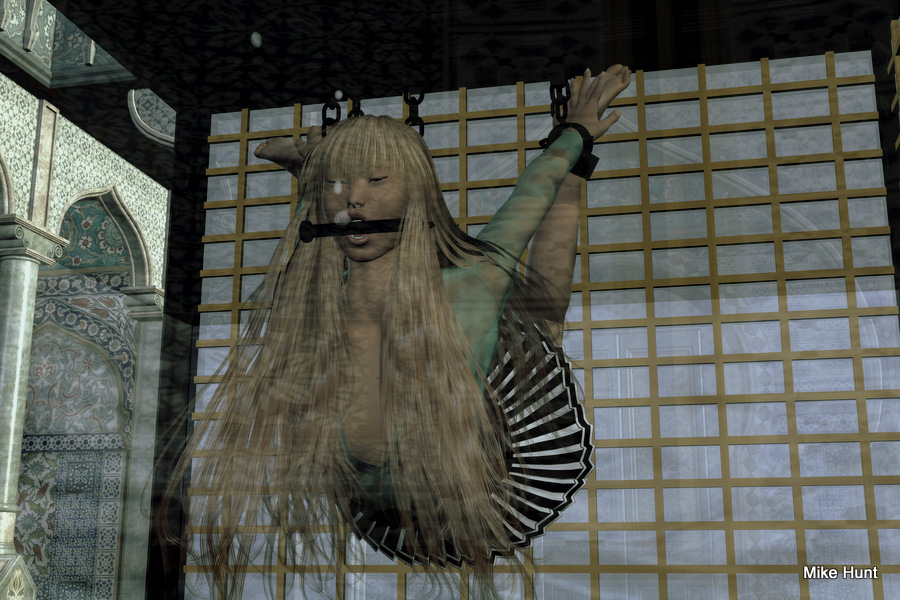 “Are we having fun yet, girls?” Dolcetta asked with a lustful grin. They all looked at her with admiration. Once more she’d planned a party none of them had any chance of topping. When it came to hosting special events she was simply the best.

In the tank Jocelyn’s hair flowed behind her as she grunted and bubbled. She could feel the strain building in her lungs. It wouldn’t be much longer before her lungs gave out. 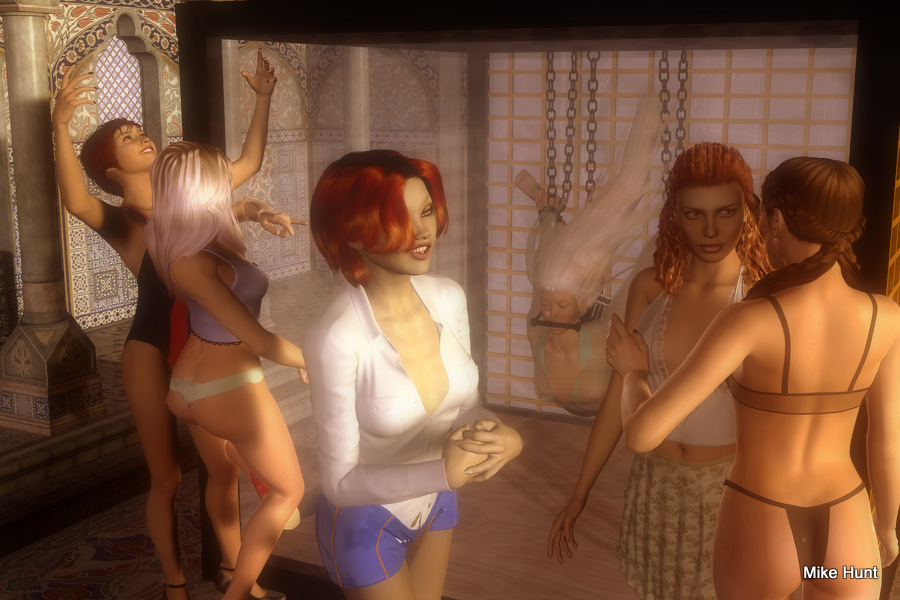 Jocelyn’s soaked green blouse turned transparent, allowing the girls to get a good view of her braless tits. But that was the least of her worries. Her chest was burning, her stomach starting to ripple as her lungs insisted she take a breath.

All of the sudden Jocelyn glubbed as her lungs gave out. She convulsed painfully as she tried to cough out the water she’d sucked down her windpipe. Then she really started thrashing about.

“Ohmygawd!” Melicia breathed. “Dolcetta; you’re the best! Just look at her drown!” She nearly climaxed at the moment of truth.

Clarice was spellbound. Ruby and Sela started making out with each other. Poor Jocelyn, oblivious to the sadistic witnesses to her drowning, began to settle until only stray muscles fired as her chest rippled from the twitching of sporadic nerve endings going off. 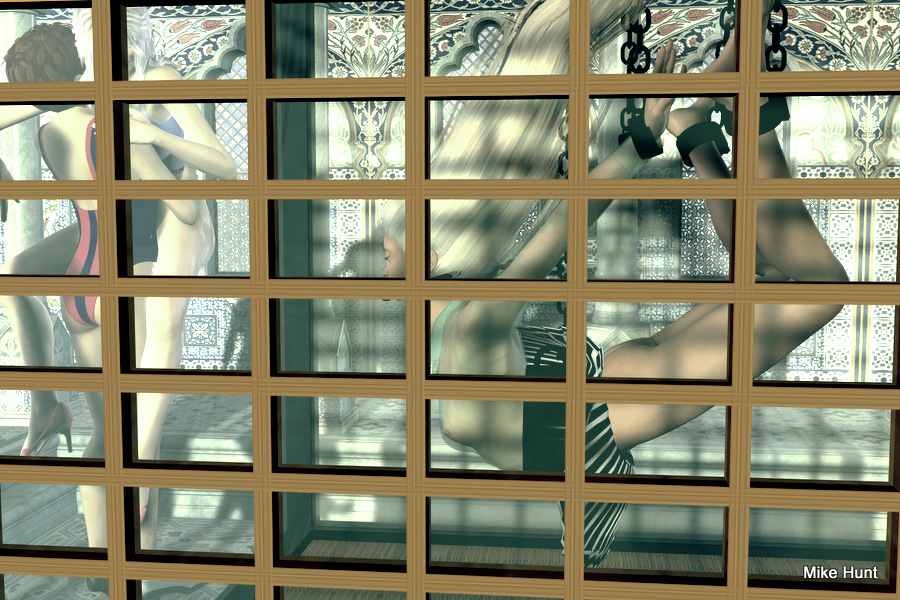 The girls panted for breath as they looked into the tank. The blouse was virtually transparent now.

Nipples were fully erect, indicating Jocelyn must have experienced some sort of humiliating arousal at the time of her drowning.

“What do you think, Melicia? Isn’t she a pretty fish?”

“She certainly is, Dolcetta. Gawd, she looks fucking gorgeous in there!”

“You should go around back and look at her pussy. She wasn’t wearing any underwear when I put her in there.”

She went around back to have a look. It was pink and perfect. Melicia stood there watching Jocelyn’s dangling corpse from the side, panting breathlessly at her sexy birthday present. 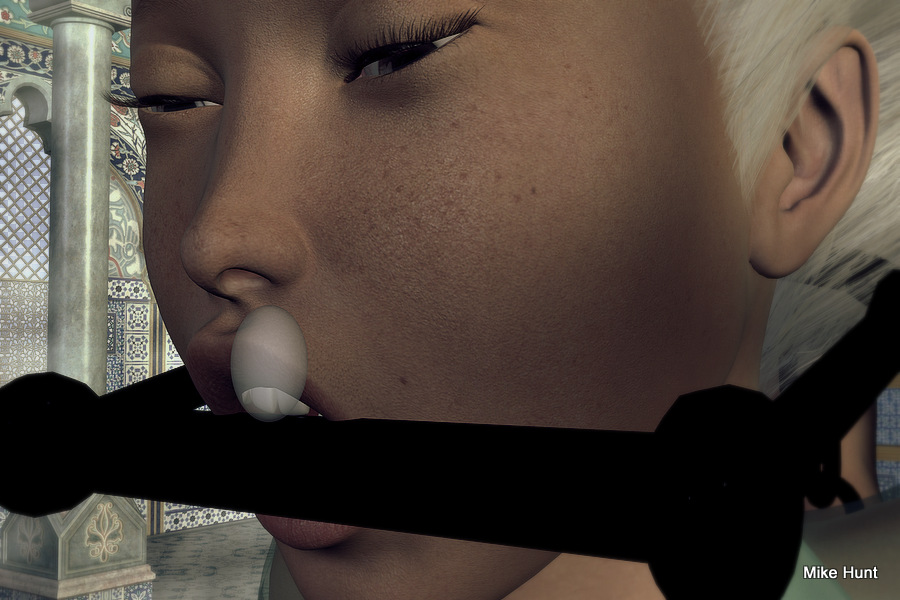 Her friends were overcome with sexual lust. Ruby and Sela got naked and started making out with each other. Dolcetta was sucking face with Clarice. But Melicia could only stare into the tank at the drowned woman.

Dolcetta paused from trying to suck the tonsils out of Clarice. She pushed the drain button on the aquarium. The water began to run out almost as fast as it had rushed in.

The tank drained until the dead girl hung lifeless in the chains. “Well don’t just stand there,” Dolcetta told her friend encouragingly. “Go on in and help yourself! I hope you like your gift!”

“Do you mean it?” Melicia’s mouth was frothing at the idea of feasting on that dead pussy. Dolcetta waved at her to go right ahead.

The birthday girl opened the tank and went inside. Then she freed Jocelyn’s corpse from the chains until she was holding her in her arms. “Everyone’s got a playmate but me,” she told the dead freshman. “I guess that means you and I will have to find our own ways to amuse each other.” 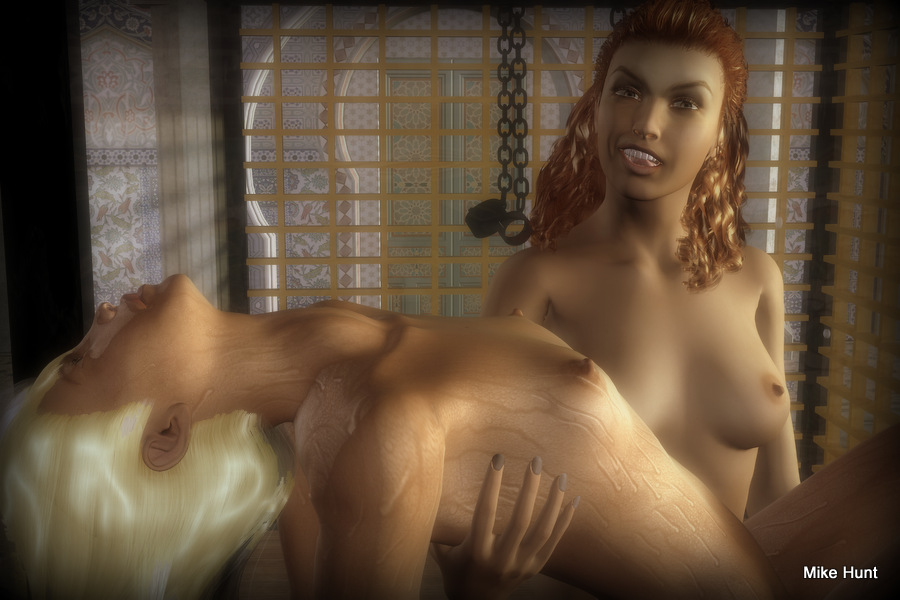 She carried her away to a nearby room that was used for all sorts of sexual shenanigans. She carefully laid her prize out on the bed. Then she moved between the dead girl’s legs and began to feast on her pussy.

(Inspired by C. Mike Hunt’s renders and his story idea.)