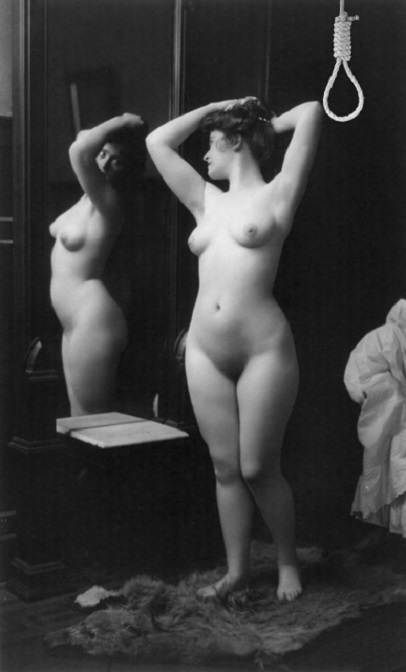 Betty felt a sense of sadness over what she was considering. Then she forced herself to put it out of the back of her mind. She’d already made her decision. The question now was one of location.

She wasn’t sure where she wanted to do it. It was hard to find a place that seemed appropriate. She finally went to her bedroom, figuring it was the most intimate room in the house.

The first thing that caught her attention was the mirror on the wall. She stared at it as though hypnotized. What would it be like if she could watch herself?

She looked upwards until she found something in the ceiling that might work. She went and fetched the rope she’d acquired for her task. She formed one end into a noose, glancing from time to time at the mirror.

The more she thought about it, the more it appealed to her. Soon she had the noose ready. She got a chair and stood upon it in the bedroom, stringing the rope up in the ceiling and making sure it would hold before bringing the coil down.

There was no longer any sadness. Replacing it was a sense of nervous anticipation. Betty could feel herself becoming strangely excited.

She made sure the chair was directly beneath the noose, checking the height. Then she began to undress. She wanted to do this naked.

She folded her dress and undergarments upon the bed. There was no deed to put them away. In a few minutes it would not matter anymore.

She went over to the mirror and began examining herself. She lifted her arms, admiring her form. There was still beauty there. She was going to make a nice looking corpse.

She caught sight of the noose reflected in the mirror. She gasped quietly as she started to tremble. Her pussy moistened as her nipples hardened.

She turned and looked at the coil dangling above the chair. Then she looked at the mirror. This would be perfect. She would actually be able to watch herself hang.

She took one last look. Then she sighed heavily. No need in delaying things any longer than was absolutely necessary.

She went over, grabbed the noose and pulled herself up onto the chair. Then she looked at her reflection in the mirror. It gave her a thrill knowing that attractive woman looking back at her was also going to hang herself.

She watched as the woman in the mirror reached up and grasped onto the noose above her head. She slowly looped it around her neck, gasping at the touch of the hemp upon her flesh. Betty looked at her reflection and saw the excitement displayed there.

Betty trembled as she started touching herself. The woman in the mirror matched her movements. It was incredibly exciting watching that naked individual touch herself with the noose looped around her throat.

She panted for breath as she cupped her mounds. The woman in the mirror did the same, appearing quite pleased with the firmness of her mammaries. Betty watched the sexy bitch fondle and caress herself, turning her on even more.

The reflection reached down and began rubbing between her legs. Betty’s excitement intensified, the fear mostly gone now. In its place was a perverse excitement over what was to come.

She saw the woman in the mirror wink at her as she lewdly touched herself. It was if she was telling her, “Join me, Betty. Step off with me and we’ll dance together.” Betty’s excitement intensified.

Her heart beat fast as she watched the woman in the mirror hesitantly put a foot onto the edge of the chair. It looked as though she was about to flip it away behind her. Was she actually going to go through with it??

“Do it!” Betty told the mirror as she began to finger herself harder. “You have no idea what I’m feeling right now! Step off, you sexy bitch! I want to watch you hang!”

The woman slyly smiled back at her. Then she flipped the chair away. She hit the end of her rope at the exact same moment Betty did.

The reflection’s hands immediately came up, instinctively clawing at the rope around her neck. ‘No!’ Betty thought as she watched. ‘You must enjoy the experience! Here; let me show you!’

It took everything she had to bring her arms down. Betty began cupping her hard, firm breasts as she fingered her dripping slit. In the mirror she watched the woman do the exact same thing.

The reflection began to kick and struggle, her toes searching for solid footing. Instinctively she groped her boobs more aggressively. The more she tried to breathe, the more violent she fingered her wet pussy.

The reflection kicked harder. Then she threw her chest out as she started humping the air. Her face turned red as her breath was cut off.

The slut in the mirror jerked hard. Then she hung limp as she swayed back and forth. ‘That was perfect!’ Betty thought as she began to lose feeling in her extremities. ‘You can rest now. Here; I’ll rest with you.’

They both quivered as their toes fluttered. Arms hung at their sides as they stared at each other. When the reflection’s bladder gave way, Betty allowed hers to go as well.

‘You’re so sexy,” Betty thought tiredly as her vision started to dim around the edges. ‘That was one hell of a dance you put on. I hope mine was just as good.’

Both bladders gave way, Betty’s and the one reflected back to her in the mirror. Her tongue protruded out of her mouth. Her last thought was how wonderfully that whore in the mirror had hanged for her. Then she was aware of nothing at all.

Her naked body was found the next morning by the landlord. He shook his head at such a waste. But he couldn’t help wondering about the enigmatic smile that graced the lovely face. 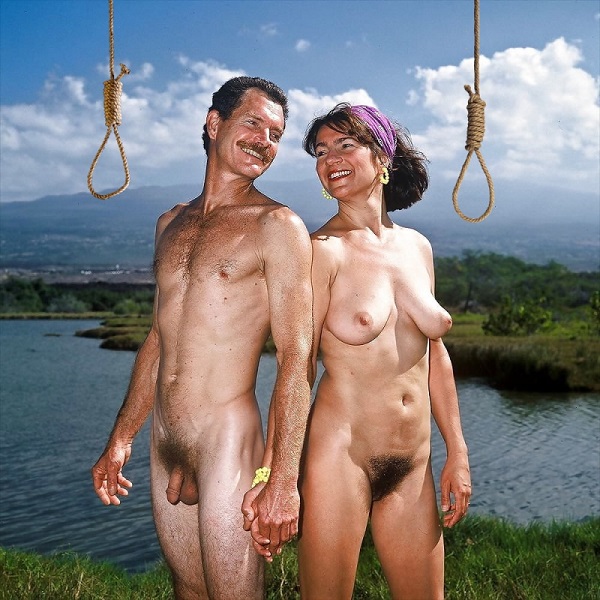 “Do you still want to go through with this?”

They began taking their clothes off. Then they strung up separate nooses from the sturdy branch above. At least they had a great view looking out over the water.

They paused to look at each other. She admired his physique, his lack of a beer belly. He admired her breasts even though they sagged a little.

“You look good,” she said with a smile.”

They paused to look out over the water. A slight breeze ruffled the blades of grass. The water rippled as a robin chirped happily.

“You realize there’s no going back once we do this, right?”

“Are you trying to get out of this?”

“I’m just giving you a chance to back out if you want.”

“I have no intention of backing out. What about you?”

“I’m going through with it for sure. Why do you think I contacted you in that chat room?”

“Why do you think I told you about this place?”

“You certainly picked out a great spot to hang,” he said appreciatively. “I could have searched for years and I would never have come up with something as beautiful as this.”

“Thank you. I always did like this spot. I can’t imagine a more beautiful location in which to hang to death.”

They grasped hands as they looked at each other. He smiled bravely, causing her to smile back. He couldn’t help wondering if she really was serious or if she’d lured him out here just to watch him hang.

He took a look at his noose again as she looked at hers. Then he asked, “Are you sure about not using any cuffs?”

“Normally I would. But I don’t want anyone to think I was forced into doing this.”

“Handcuffs would have been easy enough to attach. You just bring your arms behind your back and then ‘click’.”

“True. But this way I can touch myself.”

“Don’t worry. Once I loop the noose over my neck it’ll harden up in no time.”

“I’m looking forward to seeing that.”

He reached up and grabbed his noose first, letting her know he was not about to back out now. Almost immediately his cock began to stir. The thought of hanging to death in mere moments was starting to get to him.

She smiled as she reached for hers. Her nipples hardened once she touched the coil. She couldn’t believe how much her pussy was dripping.

They glanced at each other, their hearts beating fast. Now it was getting serious. They both started to tremble upon realizing the moment was almost upon them.

He slowly began to loop the coil around his neck. She matched him movement for movement. Her breath caught in her throat at the intimacy of sharing this moment together.

His cock hardened considerably as he took his noose and pulled it snug around his neck. She did the same, their eyes locked on each other. They both panted for breath as their chests rose and fell.

They turned and looked out over the water. The robin ceased chirping until it seemed they could actually hear the wild beating of their hearts. Instinctively she reached out and took his hand.

“I’m glad you’re here with me. I like the idea of not hanging alone.”

“Me too.” But now his throat was dry. He needed a drink of water.

She took a deep breath to steady her nerves. Then she squeezed his hand tightly. “Together?”

“Together,” he murmured in agreement.

She nodded as she got ready to step forward off the edge of the hill they were standing upon. But she couldn’t make her feet move. She gasped for breath as she turned and looked at him again.

“Count of three?” he suggested.

She nodded… “Count of three.” Then she inhaled deeply.

“One…” he said aloud, pausing to look at her. She took a deep breath and murmured, “Two…” Then time seemed to stand still.

They looked at each other for a long moment. Together they blurted out “Three!” Then they stepped forward, pushing off the hill with their right foot.

They lost the edge of the hill as they started to pitch forward. Instinctively they let go of each other. Then the noosse caught their full weight.

The branch creaked as they swung out over the water. Almost immediately their hands reached up to claw at their nooses. But it was too late.

His cock jumped as precum started dripping out of the tip. Her pussy throbbed as she dripped like crazy. They rasped for breath, struggling to loosen the ropes that were now constricting them.

His hands dropped first. It took every bit of willpower he had to keep from reaching back up. Then he began humping the air as his cock twitched and jumped.

His hips thrust outward until his cock suddenly spurted out over the water He seemed to be fucking the air. Maybe his oxygen deprived brain thought he was somehow fucking her.

For a moment she regretted not having sex with him before their hanging. Then her knees came together. That’s when she found herself all caught up in the midst of an incredible orgasm.

Together they humped as their sexual organs responded from their breathless agony. Then their legs shot out until they tried to entangle each other. It sent them spinning and swaying as they bounced off each other.

They hitched and gyrated as internal organs started shutting down. Then their arms hung at their sides as they gently humped and twisted. Her bladder released as she pissed into the water below. His cock softened several seconds later until he too pissed himself.

They gently swayed back and forth, occasional muscles twitching. Their feet curled as their fingers twitched. Stray muscles spasmed in arms and legs as they shuddered themselves into mutual oblivion. Then they twisted in place as they gently swung back and forth.