An exercise in beheading

Aravanna was herded through the opening in the wall along with 19 others – young females one and all and each one totally naked. They had been summoned from all four corners of the empire. Now they all stepped into the small outdoor arena that was partially surrounded by an amphitheater with granite benches overlooking them.

A significant number of Roman citizens, many of obvious nobility, were seated and looked down on them, surely an ominous sign. What’s more, the Emperor himself was seated in a special section close to the arena. A number of generals and concubines were gathered around him. He was in a very good mood, indicating he was capable of ordering almost anything to be done to anyone.

Aravanna felt a lump in her throat, painfully aware of her nakedness. Even amongst others her age she felt extremely vulnerable. The Emperor was well known for his cruel and exotic tastes. She couldn’t help fearing the worst.

The Emperor suddenly stood up with a goblet in hand. “Summon the gladiators!” he declared, lifting the goblet up in a toast. A moment later a number of men stepped through an opening on the opposite side of the arena.

There were 15 in all. The females instinctively shied away from them. Aravanna saw right away that none of them were clothed.

There were many with semi-erect penises. It caused most of the women on the field with them to start chittering amongst themselves in alarm. Up in the crowd the females looked down with some envy. Was the Emperor about to have them all the females in the arena raped in broad daylight as a part of this afternoon’s entertainment?

As the men moved closer to her and her frightened companions, Aravanna noticed each one brandishing a sword. These gladiators were prepared for battle. But the females with her were not.

It was another ominous development. Aravanna instinctively took a step backward. Sun glinted off 15 shafts of steel as she gasped in alarm. Others standing around her also sensed danger as they nervously backed away as well.

As the lead gladiator approached, one of the maidens submissively stepped forward to meet him. Perhaps she expected to be deflowered and was offering herself so as not to be injured in the process. That’s when the Emperor’s voice rang out, “LET THE EXERCISE BEGIN!”

When the lead gladiator was close enough he simply lifted his sword and swung it firmly. It sliced cleanly through the neck of the startled young maiden. Her head toppled onto the dusty floor of the arena as her body collapsed in a heap.

There was a look of complete and utter shock on her face. Her naked body jerked and spasmed, crimson spurting out through her severed neck. The gladiator with his penis at half-mast proudly picked her head up and lifted it by her brown tresses.

He displayed it to the Emperor and his honored guests. The crowd roared its bloodthirsty approval. That’s when pandemonium broke out.

The remaining maidens scattered in all directions, screaming wildly for their lives. The gladiators eagerly set after them. Swords were upraised as though these men were now engaged in mortal combat.

Aravanna fled for her life as her terrified companions ran every which way. She heard a shriek and turned to see one maiden being chased right into the path of a gladiator. The sword swung purposefully.

Her head flew away to the cheers of the observers. Her body crumpled to jerk and spasm as blood poured copiously out of her severed neck. Aravanna barely had time to observe him lift up the head to the approval of the cheering crowd before she was forced to take flight again.

There was no place to run; the arena was totally enclosed. Several random pillars stuck up to provide minimal obstacles. Otherwise they served no useful purpose, proving to be rather poor choices behind which to try and hide.

One poor maiden found out the hard way, cowering behind one while watching the carnage. She failed to observe the gladiator come up behind her. With one smooth stroke, her head was quickly separated from her shoulders, tumbling to the ground as her body collapsed. The shocked look upon her face revealed she had absolutely no idea of the danger approaching her from behind until it was much too late, the crowd roaring with delight.

Aravanna ran as fast as she could, sensing it would do her no good. A gladiator came after her, sending her screaming in the opposite direction. She caught up to a slower moving maiden, shot on past her… and then heard the crowd roar again. A quick glance back revealed her former pursuer triumphantly holding up the head of the girl she’d just run right on by.

She winced each time she heard another cheer. That meant another girl had fallen. The numbers of her still living companions were plummeting precipitously. Her only hope of survival now was dependent upon the off chance the gladiators would be limited to acquiring one head and one head only.

She ducted behind a pillar, momentarily catching her breath. When she peeked around she saw a maiden come to a screaming stop, totally unaware of the gladiator behind her. His sword swung out and she was decapitated from behind, much to the anger of the gladiator preparing to strike while standing in front of her.

Something instinctively told her to duck. A moment later she heard the clang of the sword as it hit the pillar, narrowly missing where she’d been mere seconds ago. She let out a scream and started running again.

Now there were corpses strewn all across the arena floor. Decapitated bodies spurted flowing crimson out of severed necks. A few gladiators had stopped their bloody work and were now availing themselves of the naked corpses for their sexual gratification.

Aravanna yelped each time another headless body came into her line of sight. There was another roar… and then another. Her companions were dropping like flies.

She rounded a pillar only to see one of the maidens sandwiched between two gladiators. Both swords flew at almost the exact same instant. One passed through empty air a split second later where a head had once been attached.

Aravanna’s shriek of terror was drowned out by the cheering throng. She peeled off and began running in yet another direction. Her fate was clear now: death by beheading, perhaps followed by a degrading of her corpse.

She tried running back toward the opening they’d come through earlier. Perhaps she could find some sort of exit. But a gladiator stepped in her way, intercepting her.

His cock was hard as he grinned at her. His sword dripped scarlet from a previous beheading. That’s when Aravanna knew for certain that her life was forfeit. And it was all for nothing more than the amusement of the Emperor.

She tried to run one last time. But the gladiators were corralling the remaining maidens in little pockets. She heard another roar as another of her sisters lost her head.

A gladiator stepped in her path, hefting his sword as two more came up from behind. “She’s mine!” he declared in warning, causing the others to step back deferentially. Aravanna instinctively took a step back as well.

She trembled with fright, whimpering pitifully. He quickly reduced the distance between them. That’s when her bladder gave way as she peed herself from the terror of the moment.

The first thing she thought of was how much it would hurt if his aim was not true. Aravanna tipped her head back a little, exposing her slender column. The gladiator smiled, his penis hard as he accepted her offering.

She saw the sword cut through the air before she felt a sharp pain in her neck. Then she felt like her world was flying. His stroke had been true.

She vaguely heard a cheer as she landed face down upon the dirt floor of the arena. Aravanna tasted the dust of the earth mixed with her life’s blood in her mouth. Then her head was lifted up to the cheering crowd.

She saw the Emperor lift his glass in a toast to her kill. Her head was swung around so she was able to get one last glimpse of the arena. The last of her naked companions was crumpling onto the ground, her body jerking and spasming as a fountain of blood shot up out of her neck.

Her vision shifted until she saw her gladiator pull her toward his stiff erection. Her mouth was impaled as the crowd lewdly cheered. She tasted his stiffness on her lips. Then there was no more fear or terror as consciousness faded away.

The crowd cheered as the gladiators used the bodies of the dead and the dying. Mouths and neck stumps were impaled as naked corpses twitched and quivered. The emperor raised his goblet in a toast, having enjoyed the bloodshed and now reveling in the graphic necro display.

Eventually the heads were brought forward and were lined side by side upon the arena wall for the Emperor to inspect. The naked bodies were gathered up from all over the arena. The gladiators made no attempt to be respectful or modest, pulling bodies by arms and legs while shamefully exposing the well-fucked crotches and dripping pussies as they were dragged through the blood of their fallen sisters.

20 decapitated young women were lined up flat on their backs before the Emperor for his inspection, breasts up and legs spread lewdly. The gladiators were then instructed to sodomize the bodies. As there were only 15 men and 20 maidens, a group of 5 volunteers were drafted from the audience in the amphitheater to attend to the corpses of the five unattended maidens.

The Emperor watched gleefully for several minutes before sending his concubines into the arena to play ‘match-the-head-to-the body’. There was much laughter and gaiety as his women tried to figure out which head belonged to which corpse. The Emperor was quite jovial.

He finally ended up taking on two of his concubines right there in front of one and all. He alternated between them while watching the debauchery in the arena. The crowd roared its approval.

There was no care made to make sure each skull was reunited with the body of its former owner. The pushcarts were ultimately taken down to the river. The day’s exercise in beheading ended with the ignominious disposal of the decapitated maidens being dumped one by one into the water… 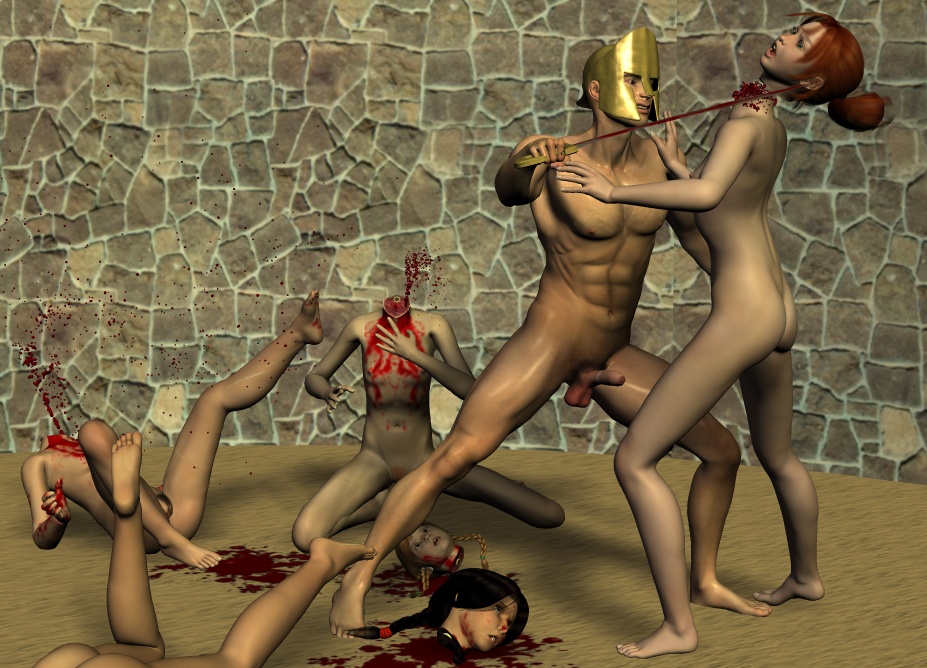