(A bonus story for the holidays.)

“You’d be our regular customer,” Kamila laughed. “You’d go broke inside a month.”

I smiled as I shook my head. “Many places have already sprouted up touting the benefits of bondage and asphyxiation, Zuza. I doubt I could add anything new that would attract a clientele that is not already being served.”

“Then you could specialize.”

“In what?” Kamila wanted to know.

“Lesbian asphyxiations that result in death. You could become a certified asphyxologist… maybe even a snuffologist.”

“There are no such people,” I chided her.

“Then you could be the first, Dusa! Kamila will help you; right Kamila? After all, you operate the wand so efficiently.”

“That’s because you orgasm so easily,” she chuckled.

“I’ve never killed anyone before, Zuza.”

“But you’ve damn near killed me on several occasions.”

“That is because I can get a little caught up in your orgasms to the point where I have one of my own as I strangle the life out of you.”

“Then do it for real. I will be your first, Dusa. You can do it downstairs in your basement with the equipment you already have step up for the likes of me.”

Kamila shook her head. “Don’t be foolish, Zuza. Dusanka does not wish to strangle you to death. And you do not wish to die.”

“Oh, but I think she does. And I would be willing to be her first.”

“Zuza, you are intoxicated. We all are.”

“I really think you should get licensed and set up shop down in your basement. And I am serious when I say I will be your first. Take plenty of pictures and video of my death to advertise your services.”

“Perhaps we’d better go to bed and sleep off such a foolish idea.”

“But I’m serious! I want to be your first snuff-puppet!”

“Come on, Zuza,” I laughed, helping her stand uncertainly on her feet. “Let’s get my ‘snuff-puppet’ off to bed. You can sleep it off here for the night.” Of the three of us she needed the most help to reach the bedroom. But we wisely stopped off in the bathroom along the way.

Naturally I thought that would be the end of it. But the next day Zuzana was quite sober aside from a wicked hangover when she brought it up again. She suggested I get licensed right away. And once more she volunteered to be my first.

“I told you I’m willing to be your first, Dusa.”

“Zuza, you are talking foolishness.”

“Dusa, I will help you. Let us go down to the magistrate and get your license. The State will happily give you one if it means giving them more money in taxes in the end. These days there are many people willing to live out their very last day at the hands of another. At least you can give them asphyxiation orgasms while they are passing on into the next life.”

I shook my head, although by then I was actually starting to give it some thought. I still told her, “Zuza, I say you are talking foolishness.”

“Zuzana, stop with all this nonsense!” But how was I to stop someone like Zuzana? When she sets her mind on something there is no stopping her.

She dragged me off to the magistrate. Two hours later I had my license. The crazy bitch actually paid for it.

We sat through a half hour presentation on how to fill out the necessary paperwork so that everything was legal. Then Zuzana made sure I went home with twenty forms. How the hell were we supposed to find twenty people who wanted to be erotically asphyxiated to death??

She was trembling with excitement when we got back to my house. I poured her some wine to calm her down. Then she started making calls from her iPhone.

I looked at her gravely. “Zuza, what are you doing?”

“I’m getting all my affairs in order. Then we’re going to check your video gear downstairs before calling Kamila to come over.”

“You’re serious about this, aren’t you!”

“Dusa, you have no idea! Hell, I orgasmed the moment the magistrate declared you now had the authority to take a life, especially knowing the first one is going to be mine!”

“Zuza, I tell you this is foolishness!”

“Is it?” she asked as she looked me right in the eye. She put her hands on my breasts through my clothes and discovered how hard my nipples had become. Then she reached her hand under my skirt and felt how wet my underthings were.

“I was right. You are excited at the thought of snuffing me. C’mon, Dusa.”

I sighed in resignation. “Where are we going now?”

“We’re going downstairs to check your video gear. Then we’re going to call Kamila to come over and help asphyxiate me for real. Everything is almost ready. I swear I’m going to explode if we don’t get on with it!”

Zuzana was not satisfied with all of my equipment. So we went out and bought another camera with a tripod. I told I appreciated all her help but that I was concerned this might be going much too far.

“Oh you’re going to go far in this business, Dusa. But I’ll be going no further than tonight after you and Kamila strangle me. Now help me close out my bank accounts so I can make the transfers to your new business venture.”

There was one final stop at the bank. The manager Hamil Zobrist didn’t even bat an eye. He admitted having seen to the transfer of funds to at least half a dozen clients in the last two weeks for death purposes.

From there we called Kamila before going back to my place. Zuzana gave me the keys to her property since she had signed it all over to me to dispose of and to use the funds as necessary. Her enthusiasm had not diminished, which was unfortunate because I now found myself becoming all caught up in her excitement that I was going to strangle her to certain death.

Kamila came over to the house and soon learned all that Zuza had done. She was astonished until she saw how excited the poor slut had become. Then she saw it in my eyes.

I got no further as she embraced me while kissing me passionately. When she pulled away she told me how turned on she was at the thought I was really going to enjoy asphyxiating her to death. She said our combined enthusiasm would be evident in the pictures and video I was to use to announce myself to the community.

Kamila shook her head. “This is foolishness.”

“That is what I keep telling her, Kamila.”

Zuza looked at her and grinned. “Just enjoy yourself using the wand on me as she strangles me to death, you bitch!”

She stripped out of her clothes once we got downstairs. Then we set up the cameras so that I could record everything. Kamila promised she would help me edit a good promotional clip for the media.

There was so much I was tempted to do to crazy Zuza down in the basement. But I knew of her limits. She could only go so far with her orgasms before she burned out. And I wanted her last one to be magnificent.

Kamila and I strapped her to the X-chair. It is cushioned so her muscles would not cramp. But it spread her arms and legs into such a deliciously lewd position. She was panting by the time we had her secured.

We soon had her writhing and begging. I just covered her mouth and nose with my hand so she could not breathe. Her eyes widened in alarm and excitement as her chest heaved from lack of air.

I let go and she gasped for breath. I covered her mouth and nose again as Kamila continued touching her all over. Her body was trembling; she was on the verge of popping.

“You may have the honor of the first one, Kamila.” Then I choked Zuzana with my hands as Kamila began licking her.

Her eyes rolled as she started to shudder. Kamila got a faceful of fluids. I experienced an orgasm as well, even while I was in the outfit Zuzana had suggested I wear as a professional.

Kamila and I touched her body all over again as she tried to compose herself. Then I used a bag over Zuza’s face as Kamila licked her again. Once more she got a faceful of fluids as I bagged her to near unconsciousness. She chuckled afterwards, telling me seeing video of Zuza orgasming violently should be a good sell to the clients I was attempting to reach.

We oiled her down, rubbing it deeply into her flesh before starting in earnest. Kamila used the wand on the sexy bitch until Zuzana shuddered over and over again in orgasm. Then I rigged the noose to come down from the ceiling, hooking it around her neck and cinching it up.

Kamila applied the vibrating wand while I applied the words in her ear. “Ready to die for me, Zuza?” She just kept bucking and shuddering from orgasm after orgasm. 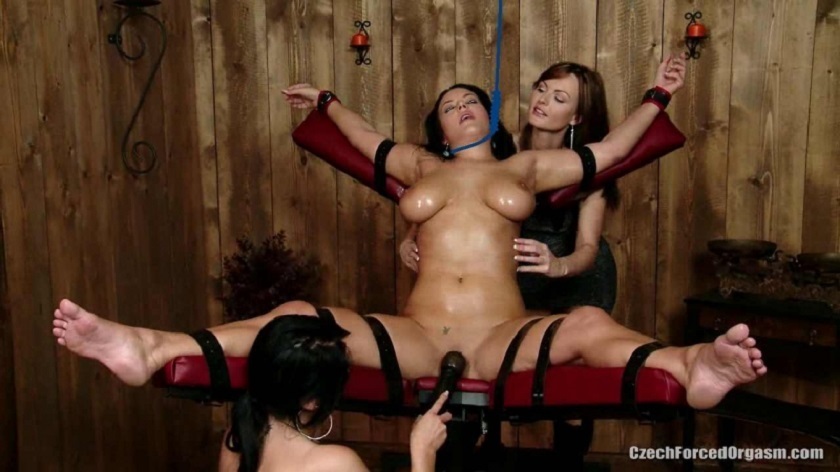 I tightened the noose until she was really struggling to breathe. I knew she could not keep it up at this pace. Kamila applied the wand as I whispered, “Are you ready to die, my love?”

She rasped and winced as she tried to nod. “Can you feel the big one approaching, you sexy bitch?”

“Do it…. .pleeeese….. nooowwwww…” I was trembling like a leaf at her eagerness.

Zuza’s body kept bucking and fighting as her back arched. Her face turned quite red before it started to take on a bluish hue. Her eyes rolled as though she was all caught up in a never ending orgasmic cycle. Then she went limp in the chair.

“Keep the wand in place just in case,” I told Kamila. A moment later Zuzana’s body seemed to go into little jerks and twitches. I found myself all out of breath as I climaxed again.

“Is she dead?” Kamila wanted to know.

“I’m not certain. Keep the wand in place.” Then I rubbed Zuza’s breasts as she started twitching a little.

I checked for a pulse, but I could not locate one. I did not think the wand was affecting my ability to find it. Then Zuza’s body seemed to orgasmically twitch again, although much less animatedly.

We kept at it for what felt like another 30 minutes until Zuzana’s body did not respond at all. I instructed Kamila to help me free her from the chair. Then I made the noose pull Kamila up into the air until the camera’s caught her hanging, her neck stretching as she pissed herself to fully indicate we had snuffed out the flame of her existence.

We left her dangling for an hour as we went upstairs for some much needed refreshments. Then we took her down and called for a disposal service. After her body was gone we looked at all the footage and spliced together some promotional material.

That was four months ago. Kamila and I have already used up those twenty forms. If anything, business seems to be picking up to the point where I’m forced to limit my services to about one client per week. And to think I owe it all to Zuzana and that one drunken night.

(Inspired by a Sadie manip which I included for illustration purposes.)