It’s a grand birthday party for the old codger, and all of his family and friends are there. Aneeqa and I are invited because I live just down the road. The food is grand and the drinks flow freely.

After awhile Grandad starts telling stories and everyone gathers round to listen. But I start to wonder how much he’s had to drink when he shares this dark fantasy about seeing pretty women hang to death. It certainly makes me wonder about the old bloke!

He tells us he’s seen pictures and renders on some snuff groups. He says he’s never seen a hanging for real of course; it’s all just in his mind. That’s when one of his older friends suggests that Aneeqa and I are built just right for his fantasy and how we should oblige his kinky dreams.

There are whoops and hollers with lots of voices cheering us on telling us we should put on a really good show for the old man. A bench is quickly set up right in front of Grandad with two nooses dangling above it. Then everyone cheers us on to give the old codger a real thrill!

Aneeqa and I have been drinking pretty heavily and our inhibitions are pretty much gone. She giggles as she leans over and whispers to me how we ought to put on a good pretend-show for all the blokes watching, especially the older ones. She says she’s game if I am, so we both walk over to stand in front of the bench.

We bow grandly in front of ol’ Grandad and then start to strip. There are lots of whoops and hollers as we slowly get undressed in a teasing manner. I’m a little embarrassed, but I’m also turned on beyond belief knowing we’re really giving the old bloke and his rowdy friends quite a show.

Grandad’s eyes are huge and I can see him and his friends panting heavily as we strip down to our birthday suits. Somebody hollers, “Now tie the two birds up!” and a couple of Grandad’s friends rush forward with a couple lengths of rope. Our arms are tied behind our backs and we both get groped a little, much to Grandad’s delight. But we’re so intoxicated that neither one of us minds one bit!

“Everybody’s looking at us, love!” Aneeqa giggles at me. I can tell she loves the attention we’re getting. I love it too, especially the way Grandad is leaning forward on his chair to gawk at us.

All those codgers are leering at us! I can’t help getting turned on even more, hoping we’re making all those old dicks get hard! We’ve definitely had too much to drink. But for now I don’t care, especially with every eye upon us!!

“Want to see us dance, love?” Aneeqa calls out to Grandad with a giggle. She gawks and gurgles as she poses seductively, acting as though her noose is really tight and that she is strangling to death. I grin and wriggle and squirm my naked body right along with her as though I’m in mortal agony.

One of his friends call out, “Pull the bench over with your walking stick, Grandad!” Aneeqa smiles and in a slurred voice tells him, “Go ahead; we’re ready, Grandad!” I tell him, “Go on, Grandad; pull our bench away and watch us dance! Give yourself a thrill, and us too!” But I really don’t think he’s going to do it; he’s just enjoying seeing us all noosed up.

I’m still thinking it’s all for show when he leans forward and hooks the bench with his walking stick. He is smiling so maybe he’s just teasing us. Aneeqa giggles as she tells me, “I think they love my tits, Dottie! I bet they all want to see them bounce!”

“Mine too!” I add, not wanting to be outdone by her. So I tease him by telling him, “Go right ahead, Grandad! Pull the bench over and give us a thrill!” It’s an incredible turn-on being naked, bound and noosed right there in front of everyone, especially when he could pull the bench over with his walking stick and send us kicking into eternity.

All of the sudden Grandad does exactly that: gives our bench a tug with his walking stick. It topples right over and Aneeqa and I drop unexpectedly. The noose grabs my neck and won’t let go, and I’m suddenly kicking and twisting and swinging all about!! 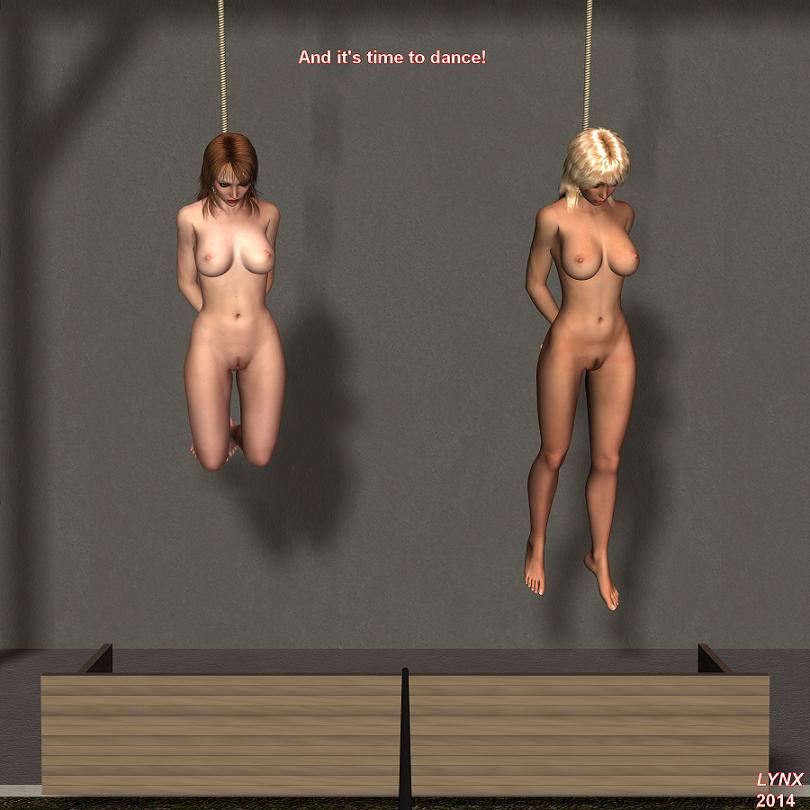 I look over at Aneeqa and see the terror in her eyes matching my own. Neither one of us thought they would really hang us. We just thought it would be a pretend hanging… posing more for show than anything else!

Aneeqa writhes and twists violently beside me. Our legs entangle and then untangle as we twist around and around and then swing back and forth! Then we bounce off each other’s naked bodies because they put our nooses too damned close to each other!! Our bums slam together, and it sends both of our bodies twisting and gyrating wildly as we swing back and forth while doing our dance of death!

Aneeqa goes into some kind of convulsion, kicking hard as her body twists and then gyrates into some sort of an S. I realize she is orgasming just as wildly as I am!! Sheer bliss overwhelms me as the noose does its deadly work!

Aneeqa bounces off me again; I can tell she is struggling violently not to die! But that is a vain hope now! Grandad leans forward and I hope it’s to tell everyone to take us down. But all he’s doing is lighting his pipe!

A voice inside me screams, “SAVE ME, GRANDAD; SAVE ME!!” Then another massive orgasm ripples through my body, a mix of pain and pleasure that says to me… “This is what you really want, Dorothy! This is how you were born to die! So put on a great show; it’s going to be your last!” I rasp and gurgle, desperately trying to breathe as my legs part again and give him and everyone else watching another lewd display.

Grandad watches us kick and dance with great enthusiasm. In fact everyone is watching us intently; nobody lifts a finger to take us down. That’s when I know we’re both going to die.

I can’t breathe anymore, and it hurts like bloody hell! Then I realize I don’t have the strength to fight anymore and I finally hang limp, my feet twitching as my body jerks and spasms. Aneeqa twitches next to me and my mind screams for Grandad to take us down now. But I can see he’s not going to; he’s just going to sit there and watch until we’re gone.

The last thing I’m aware of is my bladder giving way and it’s a humiliation beyond belief. Then I hear more whoops and hollers. The sounds fade away as though I’m getting farther away from everyone. Then I find myself tumbling into the abyss of oblivion with Aneeqa falling at my side… 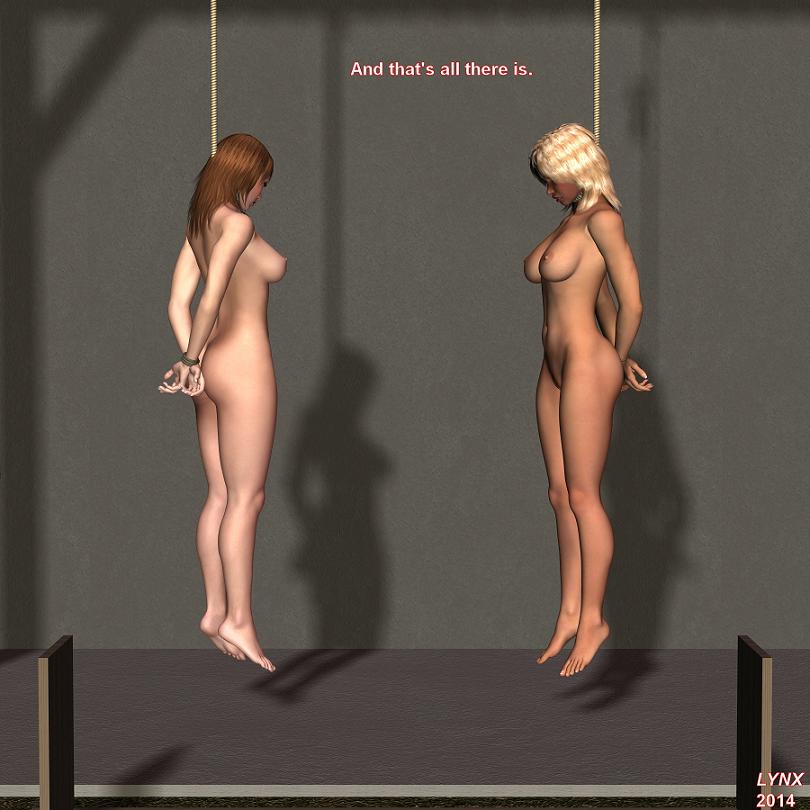 (Inspired by a poser series by LYNX. Posers are courtesy of LYNX and are for illustration purposes only.)

This entry was posted in Asphyxia Stories, Dorothy and her friends and tagged hanging, nudity, pictures. Bookmark the permalink.