Dorothy’s hanging at the hidden facility

It was a beautiful fall day as Dorothy Curtis made her way down the street in her black heels, black miniskirt and light grey knit top. The sun was out and the temperature felt just right as far as she was concerned. A slight breeze playfully tousled her blonde strands as though Mother Nature was looking down favorably upon her.

She was on her way to the supermarket humming a happy tune. She had plenty of money in her pocketbook and life was good. Her career as a business woman was flourishing and she was well known about town. At that very moment Dorothy Curtis could not have been any happier.

She was close to the edge of the street when a car suddenly pulled over to the curb a few paces in front of her. As she curiously approached, the back door suddenly opened and a man in camouflage trousers and a dull grey/green shirt burst out. “That’s the one!” proclaimed another male voice from the driver’s seat. Dorothy was grabbed and hustled into the back seat so fast she had no time to think!!

“What the bloody hell??!!” she cried out as the vehicle pulled away from the curb and headed down the street. She twisted and struggled for a moment or two, only to discover it was useless to resist in the strong hands of her male captor. “Where the bloody hell are you taking me??!!” she blurted out from a mixture of anger and growing alarm.

“Not to worry, miss,” the driver answered from the front seat. “We’ll be there shortly. When we arrive everything will become clear!”

She looked at the man grasping her and harumped at him, shaking off his grasp as she sat back in her seat. There was no use resisting now; he was much too muscular. “I hope there’s a good explanation for all this nonsense,” she muttered. “I was on my way to pick up some groceries, you know.” But her companion in the back seat uttered not a word so long as she was behaving.

It took about 20 minutes for them to drive out of the city and down a private lane. Then they went down a hill where a hidden facility made its presence known. It reminded Dorothy of some old prison that must have been abandoned! The stone walls were faded from years of being exposed to the elements, and there were fences everywhere.

The car stopped by a little guardhouse, and Dorothy was taken out of the back seat. Her two captors escorted her toward the guardhouse where they stopped as another man in the same looking camouflage trousers and shirt came out. He had a clipboard with a picture and some paperwork which he inspected before looking closely at her.

“Is this the one?” the man on her left arm asked perfunctorily. The man with the clipboard nodded…

“Yes. She matches the description given by the complainant.” Then he went back inside the guardhouse long enough to retrieve a length of rope which he handed to one of Dorothy’s captors. The man took it and looped it over his shoulder as the one from the guardhouse handed a couple of shorter lengths to the other.

“Here you go, gentlemen. This should do the job rather nicely.” Dorothy was appalled…

“Very well,” the one on her left replied. Then he grabbed Dorothy’s arm. “Come along, miss. Let’s get this over with.”

“Get WHAT over with??!! Bloody hell; what are you two on about??!!” Again there was no response. 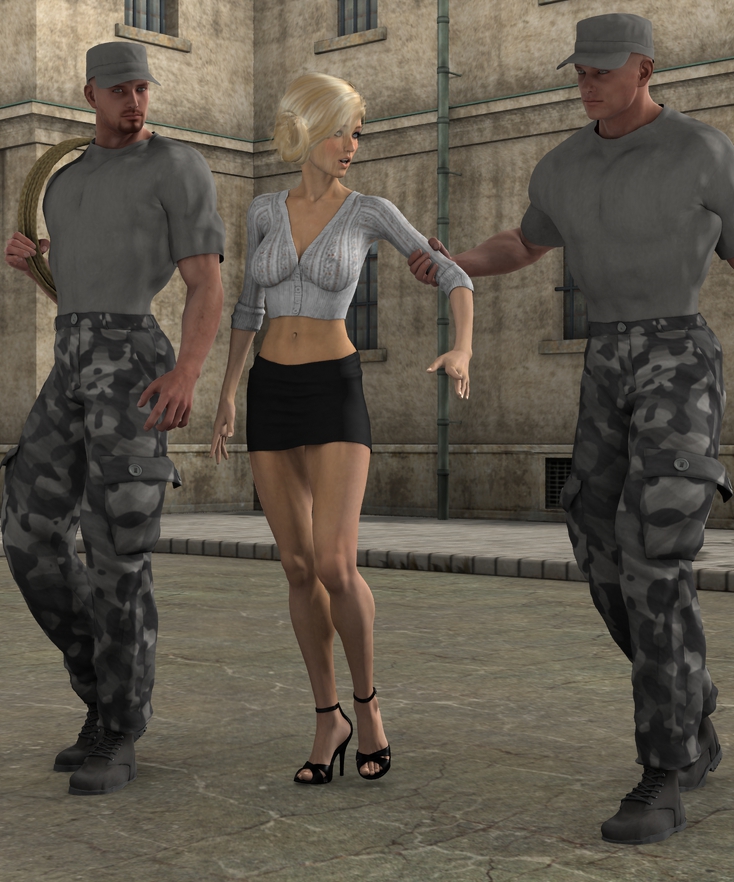 Dorothy looked at it and then gasped for breath!! What the hell was THIS???!!! She had just been walking down the street to buy groceries no more than 20 minutes ago!!!

The two men suddenly stopped her right in front of the contraption. One roughly grabbed her arms from behind, holding her firmly in his grasp. That’s when the other reached out and ripped her blouse open, popping several buttons and revealing that Dorothy hadn’t been wearing a bra! The poor woman was horrified!!!

“What are you DOING??!!” she blurted out in horror and shame.

“Slut!” was the man’s reply who had exposed her.

“Looks like we’ve got the right one for sure!” the man from behind added with a cruel sneer. 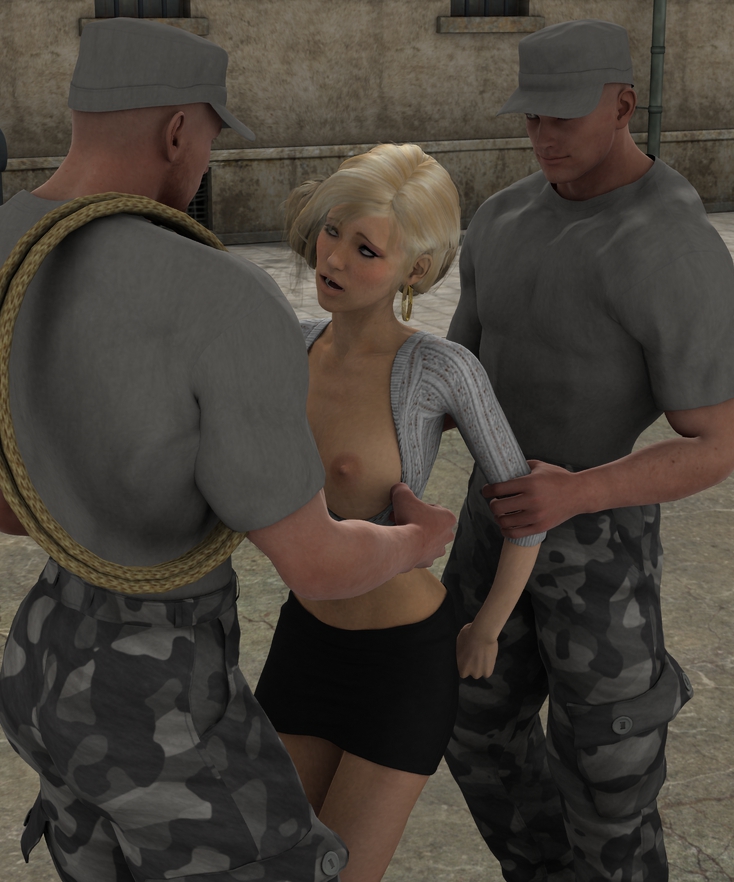 Dorothy felt the one behind her start to tie her arms together behind her back! That’s when she started to hyperventilate!! This wasn’t a dream at all; this was all too bloody REAL!!!

The other took the rope over his shoulder and tossed it over the projecting arm of the post well above his head. Then he fashioned a noose out of one end! Dorothy let out a squawk of terror… and then promptly wet herself!

“Why are you d-doing this??” she blubbered as she was forced up the small set of steps.

She soon discerned the purpose of the flat piece of wood sticking out in front when she was positioned right on top of it! Then the noose was draped over her shoulder around her neck! Dorothy let out little mewling noises as her mouth went dry.

One of the men came down from the concrete where he retrieved from his pocket the additional length of rope he’d been given. Then he proceeded to tie Dorothy’s ankles together just above her heels! Dorothy was horrified and she let out little wounded-bird cries as the man behind her maintained a good grip on her arms!

She simply couldn’t fathom what was happening to her!! One minute she had been walking down the street to the supermarket on a perfect fall day, happy as a lark! The next she was being prepared for a hanging!! Her breasts had been deliberately exposed and her nipples protruded shamefully as her pussy became squishy from a terrible arousal!! 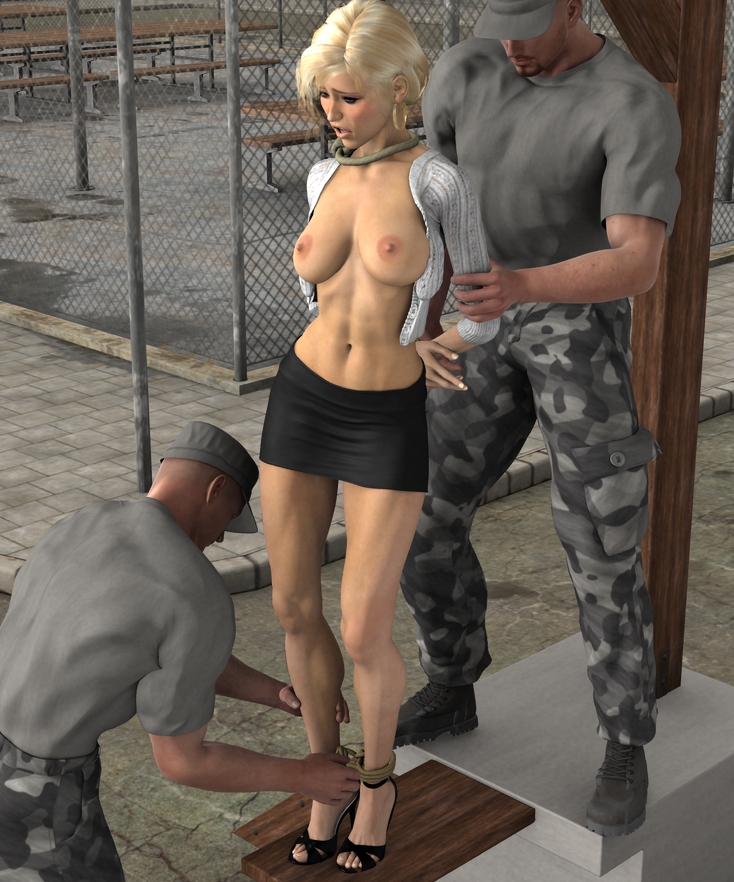 Her chest began to heave; she couldn’t catch her breath! Her mouth was dry and her voice cracked as she tried to speak. “WH-WHY?” she croaked, unable to force out any more words.

“We’re just doing our jobs, ma’am,” the one said as he finished tying her ankles together. “Some complaint from some woman about you, near as I can figure,” the one behind her added. Then he left her as he came down off the concrete piling.

The one in front stepped back as the other moved to stand next to the lever. Dorothy’s eyes got bigger and bigger; she just couldn’t believe this was happening!! How had such a glorious day gone so horribly WRONG??!!

With a motion from his foot, the man standing next to the concrete piling tripped the lever. Dorothy suddenly felt the piece of wood she was standing on give way! Then she started to fall, only to be jerked up short by the noose around her neck, forcing her head to tip downward!! 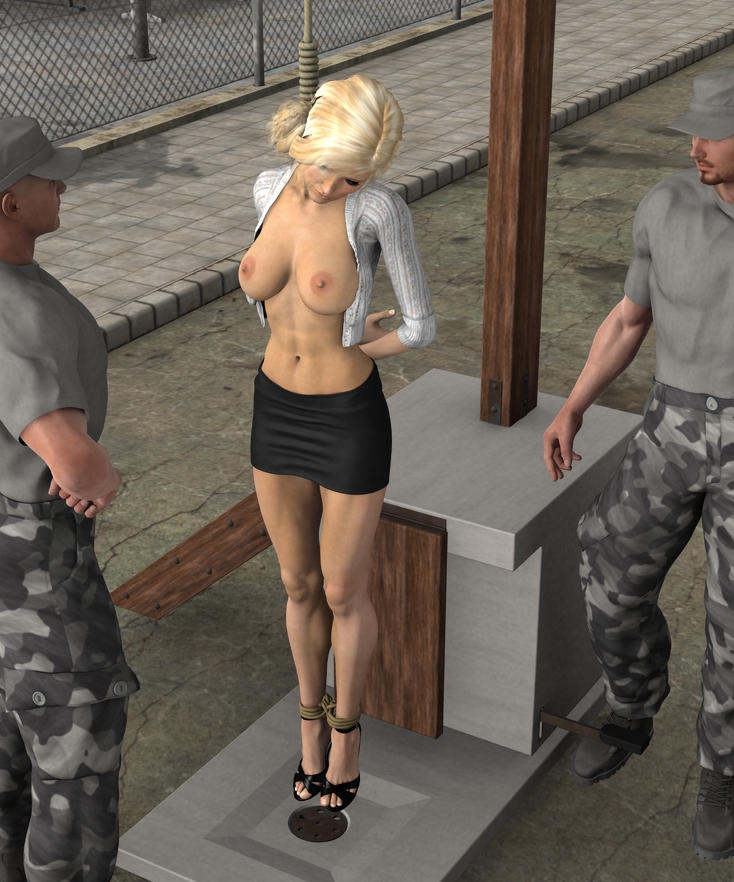 For a moment she hung limp and ramrod straight, her breath rasping out of her mouth as her feet fluttered for solid footing beneath her. Then she began jerking her legs and arms as her body instinctively fought against the constricting coil around her neck. Harder and harder she jerked and twisted, the noose tightening ominously as she struggled, causing her to fight even harder for another breath!!

Her breasts bounced tantalizingly, and she noticed the one bastard standing in front of her staring at her in utter fascination. Was that a bulge developing in his trousers?? She could not believe he was getting hard watching her hang to death!!

She twisted around and jerked her legs, all to no avail. The noose kept tightening, strangling her to death!! It felt like it was taking forever even though it had only been a few minutes!!

Her knees suddenly bent as she began bunny-hopping. Her eyes became bloodshot as her breasts jerked and bounced, her nipples painfully hard. Then she became consciously aware of the agony of major organs dying inside her! That’s when her bladder gave way and she wet herself, unaware there was a drain directly beneath her designed for just such an occasion.

Eventually they took her down and disposed of her in a secret grave. Then they awaited further orders for their next victim…

(Posers are courtesy of Enhjorning and are used for illustration purposes only.)

This entry was posted in Asphyxia Stories, Dorothy and her friends and tagged hanging, pictures, topless. Bookmark the permalink.