I gave her everything. She repaid me by running off with some handsome young stranger who came to our door. It almost broke my heart.

Six months later she came crawling back. Her boyfriend had used her and then dumped her. She wanted to know if there was still a place for her.

I told her there wasn’t. I had moved on. It reduced her to tears.

She begged and pleaded. It had all been a huge mistake. He’d seduced her with his charm and the promise of adventure.

I told her there was no place in my heart for her. She said she would do anything. She would even try that “asphyxia crap” with me as she had frequently referred to it.

I told her I was no longer interested. Besides, the way I felt about her now meant a session with me might prove lethal. She said she didn’t care. She’d learned a painful lesson and did not want to be sent away.

The only thing he’d left her with was the thin, black scarf around her neck. She said she didn’t want it anymore. I could use it on her and then throw it away if I so desired.

I thought about it for a long moment. Then I told her to strip. She undressed all the way down to a black thong and nylons, items I did not recognize as she had never received from me. She left the scarf around her neck.

I led her over to my coffee table. I got some additional rope to secure her with. Then I made her lie down on top before tying her arms at the wrists.

She looked up at me with a hopeful expression, a look of remorse in her eyes. I simply stared back coldly. She gulped and winced.

I removed the black scarf she was wearing. I coiled it up before her very eyes, turning it into a garrote. Then I slowly wrapped it around her neck.

Her eyes opened wide as she gasped in alarm. But she did not resist. She never uttered one word of protest.

I slowly pulled on both ends. She tried to hold her breath. It was a useless gesture on her part.

I pulled harder. Her body began to buck and shudder upon the coffee table as she rasped for breath. She tried to jerk her hands up to interfere with my efforts. But they were secured in such a way that she could not pull them up far enough to stop me.

I eased up on her ligature. She panted for breath. Then I tightened it again as I leaned over her while kneeling.

Her eyes opened wide again. Once more her body reacted. I never expected to develop an erection in her presence. But her strangulation was certainly doing its job.

Once more I eased up on the tension to both ends. She panted for breath as she looked up at me. Still, she did not utter one word of protest.

I pulled on the ends of her scarf again. Knowing her boyfriend had given it to her did not sit well with me. My actions with her were sadistic.

The tighter I pulled, the harder she bucked. Her face became red as I applied more tension to her scarf. That’s when her knee instinctively came up as she writhed and squirmed.

I detected a fresh aroma of something sexual. I eased the tension on her scarf. That’s when I noticed her thong was damp.

So she was experiencing something sexual as I strangled her, eh? What’s more, I was enjoying myself far more than I had anticipated. I looked down upon her with a cruel smile before tightening the scarf again.

She began to wriggle and squirm anew. Her face turned red as her nipples swelled upon heaving breasts. Her hands instinctively jerked again as though trying to stop me.

I detected more of that same aroma. By now her thong was soaked. I eased up on the tension and looked down upon her impassively.

She panted for breath, her eyes wide with anxiety. Still she did not protest. Once more I pulled on both ends of the scarf.

She began to thrash around anew. Her body responded instinctively from lack of oxygen to her brain. Her hands tried to jerk upward again as her knee came up. Then her eyes rolled.

I eased the tension on the ends of the scarf, watching her eyes regain focus. The aroma was stronger now. Her thong was completely soaked.

“You deserve this; you know that, don’t you?” Then I smiled evilly as I pulled on the ends again. One more it tightened the rolled-up scarf around her throat.

Her eyes opened wide as her mouth opened and closed like a fish out of water. Her back arched as her body shuddered upon the coffee table. Then I eased up on both ends of the scarf around her neck.

She panted wildly for breath as she looked up at me. There was not as much anxiety in her eyes as before. It had been replaced with what… resignation perhaps? Excitement maybe?

In a quivering voice she asked, “Does this… does it arouse you?”

A smile flickered at the corners of her mouth. Was she relieved? Or was she hoping her efforts were winning me over? 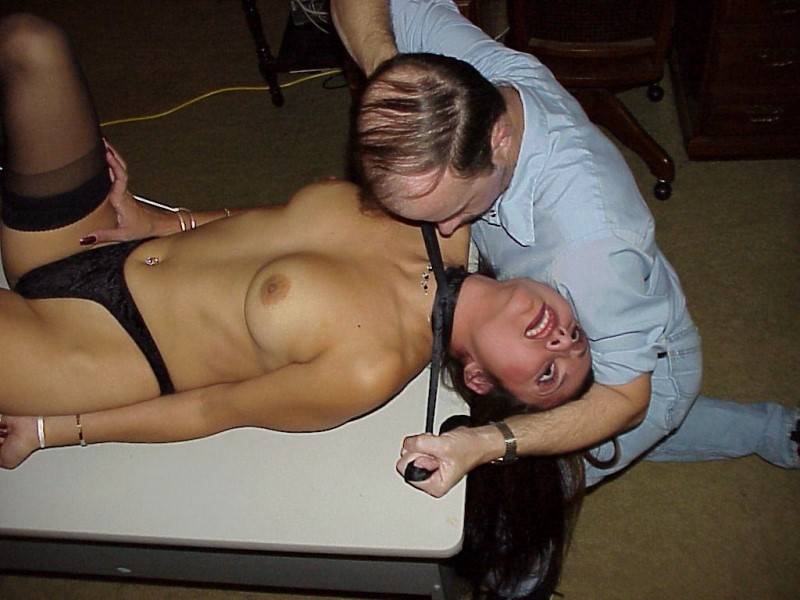 I pulled hard on both ends of her scarf. Her body responded accordingly as she bucked, shuddered and thrashed about. I was developing an uncomfortable bulge in my pants.

She was barely able to rasp for air as her face turned red. Then I eased up on both ends of the scarf again. She panted quietly for breath.

I have never seen nipples so erect before. Her chest heaved as she lay there looking up at me while trying to catch her breath.  Then her eyes flashed as she panted, “Do you want to fuck me?”

In response I slowly pulled on both ends of her scarf, still allowing her a little bit of breath. Her chest began to heave as she wriggled and squirmed. Then she looked up at me with lust in her eyes, perhaps thinking she was winning.

I pulled harder until she began to struggle even more upon my coffee table. This time she kept her hands by her sides. She never once tried to stop me.

She looked up at me with a hopeful expression as her face began to turn red. I increased the tension until she really began to thrash about on the table. It must have been difficult for her, but she never once acted as though she wished me to stop.

Her tongue slithered out in surrender. I eased off on the tension to the ends of her scarf. She took great gulps of air down her lungs.

She gave me a questioning look. I just shook my head. Her face fell.

In response, I pulled hard on both ends of her scarf. Her body bucked and shuddered as her back arched. Her face went a deep crimson before I eased off on both ends.

Once more she panted hard for breath. I could tell she was trembling. She looked at me before quietly asking, “You mean I have no other options?” I shook my head.

She thought about it for a long moment. Then she quietly asked, “Will you use my body at least once?”

“Only after you’re gone.”

I gave her a minute to catch her breath. Then I simply told her, “Stay or leave.”

There was an air of sadness and resignation in her eyes. She had damaged our relationship beyond repair. She would not be able to break through my hardened exterior.

I nodded my head again.

I pulled on both ends of the scarf. She began to rasp for breath. I started her off slow. Then I pulled even harder, maintaining the tension.

Her back arched as that sexual odor returned with a vengeance. I swear I saw her mouth the word “PROMISE”. I nodded as I pulled on both ends just as hard as I could.

Her eyes rolled as she bucked and shuddered. Then she collapsed upon the coffee table. She lay unmoving, save for the occasional spasm or muscle twitch.

I continued to pull, watching the color of her face change from red to purple. Her body shuddered as stray nerve endings fired. This time there was a new smell as her bladder gave way. Then she was gone.

I looked down upon her curiously. There was a faraway look in her eyes. Then I unzipped my fly.

I slowly pushed my erection between her parted lips. I thrust in and out, allowing her to taste me without it registering in her brain. There was the faintest flicker in her eyes as though she was appreciative.

…or maybe I just imagined it…

This entry was posted in Asphyxia Stories and tagged strangling, topless. Bookmark the permalink.