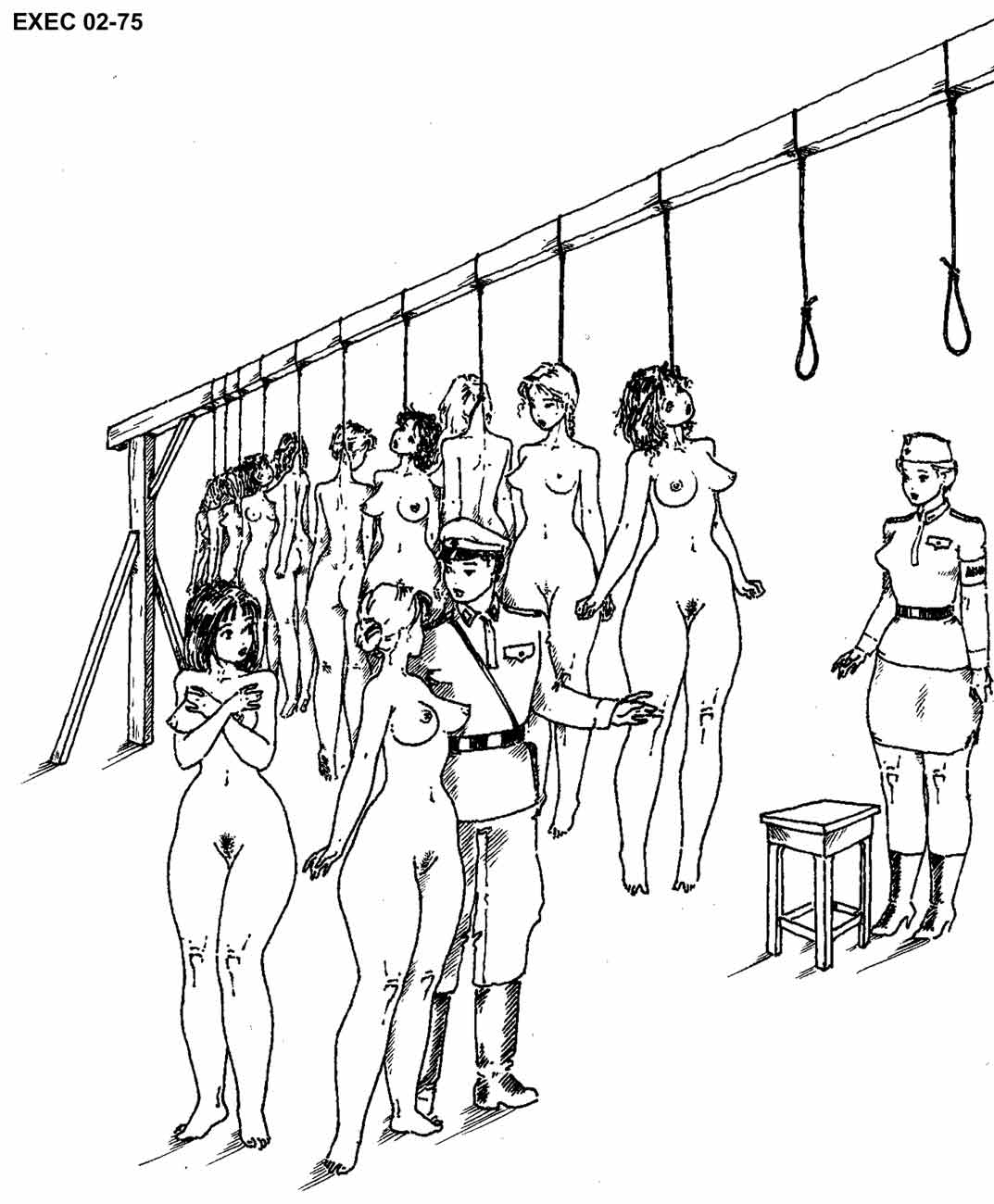 The town was quickly taken. Most of the men of fighting age were taken out and shot. That left the women and children.

I dared not disappoint Rambova and Nazimova. So I went through the women captives. I took out seventeen of the prettiest, aged from the late teens to early twenties.

Irena met me as the squad and I escorted the women to the two impatient female officers. She leaned close and whispered, “I believe you picked out some good ones in this bunch. They should be pleased.”

“I certainly hope so.”

“A large beam has been erected. See to it.”

“How many nooses, Irena?”

She gave the frightened women a quick glance. She seemed to have a knack for gauging these things. “I would say no more than twelve.”

I nodded before I turned and walked away. I got two soldiers to help me string up a bunch of nooses on the beam. Then we found a stool we decided should prove to be acceptable.

When I returned I discovered the females had all stripped for inspection. Rambova and Nazimova were looking at each one most thoroughly, poking and prodding. Breasts were squeezed and pussies were fingered.

Irena pulled two away from inspection the moment she saw me. “They already rejected these two. You know what to do.”

A soldier followed me as we escorted the two to the end of the beam where the first two nooses awaited. The women looked up and gasped in horror. I took the first one who was a brunette of perhaps 19. I helped her up onto the stool, looped the noose around her neck and then promptly pulled the stool away without even securing her.

She was still kicking when I moved the stool to the adjacent noose. The waiting blonde let out a plaintive cry as I helped her up. I didn’t bother to tie her hands either. I just noosed her and then pulled the stool away.

The two women kicked as they reached upward and grabbed their ropes, trying to pull themselves up to relieve the agony. It only took ten or fifteen seconds before their arms came down. They rasped as their struggles lessened until they gently swung back and forth, their bladders having given way.

Irena soon brought two more over. “They do not want these either.” I nodded in understanding as I moved the stool to the third noose.

I had no idea why these women were being rejected by Rambova and Nazimova. I presumed the two had very specific tastes in the captives they desired to spend their off-hours with. Our soldiers would not have rejected them thus. But I knew it was not wise to cross them as they had moved up in the ranks to become very powerful officers.

I grabbed the arm of the young woman in flowing brown hair and forced her up onto the stool. She looked frozen with fear, much like catching a deer on the road late at night freezing in place from the headlights of a truck. I quickly noosed her and then pulled the stool away before placing it under the fourth noose.

She didn’t fight as much while I attended to the fourth one in flowing black hair. She looked equally shell-shocked. I put her up onto the stool, noosed her up quick, and then pulled the stool away.

She fought harder, wrapping her legs around her dying companion as she tried to ease the agony around her neck. She lasted half a minute before her legs came away and she hung limp. Now there were four naked bodies swaying on the beam.

Irena came over with five and six. “Have they chosen any?” I asked anxiously in a hushed tone.

“One is acceptable. I think they are about to agree on a second.”

I nodded as I grabbed the arm of another long haired brunette. She certainly would have satisfied me for an hour or more. But once the officers had condemned the girls they were throwing away it seemed no man was to have them either. I think Rambova and Nazimova liked having these girls executed so we could not use them for our own lusts after having been rejected by the two sadistic officers.

The brunette let out a frightened cry as I lifted her up onto the stool. I quickly noosed her up and then pulled the stool out from underneath her. She gawked loudly before she started to kick and swing.

Another blonde, this one with short hair. She looked at the line of swinging corpse numbly. She did not resist as I lifted her up onto the stool.

I noosed her up and removed the stool. Her legs fluttered as she swung back and forth. Her arms started to come up. But then she allowed them to fall to her sides as though concluding that fighting would do no good anyway.

Irena came over with two more. I looked over to see Rambova and Nazimova had set three aside. The lucky ones seemed both shocked at the hanging of the others as well as relieved they had not been chosen to join them. I felt sorry they did not know their true fate once the officers had their fill of taking their pleasures from their warm bodies.

I wasted no time putting the next one up onto the stool and noosing her up. We did not have much time to delay. The army was on the march; this had to be done quickly.

I noosed nine and ten and hung them both before putting the stool under the eleventh rope. It looked like the officers had finished with their selections. Irena brought the last two over. She had been right again… as usual.

In broken Russian an attractive blonde with the bun in her hair looked at me and said, “Spare me and I’ll have sex with you, yah?”

“I’m sorry, fraulein. But orders are orders. You must be hanged.” Already Irena was waiting with the stool under the eleventh noose while the last poor girl waiting to be hanged simply attempted to cover her breasts as though it was more important to be modest despite these being the last moments of her life.

The blonde fought me as I took her over to the stool and placed her upon it. Irena grabbed her arms and held them steady to her sides as I noosed her up. Then I took the stool away. She let out an awful fuss as she kicked and pedaled.

I went over to the last one as Irena moved the stool under the last noose. I did not even need to take her by the arm. With tears in her eyes she numbly walked over of her own accord and bravely climbed onto the stool.

Irena smiled appreciatively as she took the honor of noosing the last one herself. The girl inhaled sharply but did not resist. Then Irena kicked the stool away.

She hit the end of the rope and her feet began to flutter. It was as though she was trying not to resist the inevitable. Then it became impossible for her body to remain still as she kicked her life away.

Irena and I stepped back to watch as the last two settled into their final moments. Then Irena was called away to stay with the five who had been chosen. Again she had been proven right in her predictions.

They inspected each one as twelve corpses twisted and swayed. Some they set to swinging back and forth, others they set into a spin. Then they kissed each other, longer than was necessary. I wisely pretended I did not notice.

They did not acknowledge me in the slightest as they walked past. To them I had done the bare minimum and was not to be praised. I sensed in them a general loathing of men.

They rejoined Irena before leading the five survivors away. But Irena gave me a long, brief look. That meant she would endeavor to find a free moment to break away and find me so we could have our own rendezvous. I usually needed one after a multiple execution such as this.