Jodie had never known such fear. After ripping her clothes off, he threw her over his shoulder and easily carried her down into the dark basement. She was deathly afraid she would never see the light of day.

He was huge and naked, his cock thick and erect. She fully believed she was about to be raped. Would she live through the ordeal?

He threw her down onto an elevated concrete pad onto her back. It knocked the breath out of her. She lay there stunned as he went over to a work table.

When he returned, she saw a large butcher knife in his hand. She opened her mouth to scream, fearing this was the end. He covered her lips with a large hand and snarled, “One syllable and I’ll gut you like a fish!”

He placed the knife nearby. Then he grabbed her legs and swung her around. He lifted up her thighs before pushing his erection against her opening. She was wet from her terror.

He thrust hard into her cunt. Her eyes opened wide in horror as she started to scream. But she managed to clamp her lips together, deathly afraid he might gut her if she made so much as a peep.

She gasped as he raped her. She felt shameful sensations. Oh well. If he was going to abuse her, the least she could do was try to enjoy herself.

Her eyes flashed in alarm as he thrust harder. Did he really mean that? Would he actually let her go after using her? She really didn’t think so. But she had to hold out hope.

He fucked her hard and savagely. Jodie had never been so brutally dominated in her entire life. The fear had made her stomach tighten up into knots. But the pounding her cunt received was sending the wrong message to her brain.

His thick cock forcibly rubbed her g-spot. He kept slamming into her swollen clit with his body. She was stretched so tightly that she couldn’t believe it! And it felt shamefully good!!

She bit her lip to cut off her whimper. She winced as she tried not to respond. But the fear and the fucking was sending a clear message to her cunt.

Would he really kill her if she came? Did she dare find out? The fear only made her body respond with an even greater arousal.

In… out… in… out; she was nothing but a fuck-toy to him. The idea was horrific. Yet, she could not stop the sexual arousal that began to swell inside her.

She was being fucked so hard, dominated so brutally, that she could not help herself. She tried to think of something negative. That was easy enough; he was probably going to kill her anyway. But that didn’t help matters any. If anything, it only filled her with an even more terrible arousal.

In… out… in… out; he was savage and brutal. He wanted her body for his own needs. There was something about it that both frightened and excited her.

He pounded her ruthlessly. He was in so deep that it felt like he was hitting her cervix. It was certainly painful enough. So why was she so shamefully aroused??

She tried to think of something else. But her pussy kept bringing her back to the moment at hand. If she came, was she really going to die??

The more she thought about it, the more frightened she became. But she could not stop the way her body was reacting. She told herself she was going to be mercilessly butchered. But her body continued to respond.

She tried to think of something else… anything else! But all she could hear in her mind was the words he had told her. The fear and the rape was making her cunt throb.

He looked down at her as though reading her mind. “You think I won’t, bitch?” Then his hand drifted over to touch the nearby knife.

Jodie wanted to scream. At the same time, she felt a jolt of horrific arousal. No matter what she tried, she could not stop herself.

He roughly grabbed her arms and brutally pounded her. He was eying her warily. It scared her so bad that she started thrusting back against him.

The fear swelled within her as she tried not to respond. But her body wasn’t listening. Gawd, this couldn’t be happening to her! If she came, he was really going to kill her!!

Her mind became focused on the pounding she was receiving. She could feel every inch of him inside her. She could feel him raping her, ravaging her, brutalizing her, taking her. It filled her with a terrible excitement… and a terrible fear.

His hand drifted ominously toward the knife. Jodie screamed in her mind from the fear and excitement. Gawd; she couldn’t hold it back!

The knife was a blur as it came down and buried itself between her tits. Jodie jerked upward as she came harder. He was still fucking her as blood bubbled up in her mouth.

She began to spasm and shudder, gurgling in her death throes. Her cunt savagely milked him as she kept squeezing. Then he grabbed the handle of the knife and cruelly twisted.

“I told you what would happen if you came, bitch!” Then he unloaded deep in her cunt. There was so much that it oozed out around his cock. She just lifelessly stared up into space, her expression frozen from a mixture of terror and pleasure.

And the render that inspired this story 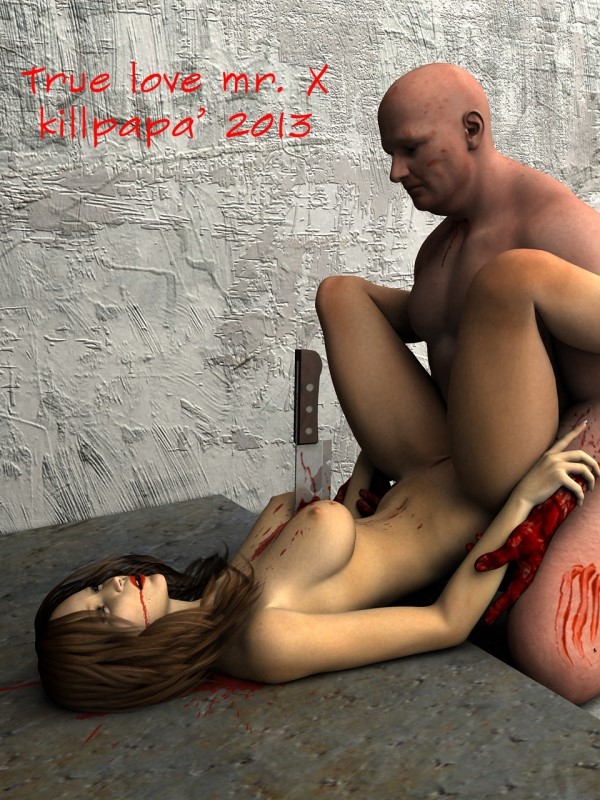 This entry was posted in Uncategorized and tagged graphic sex, nudity. Bookmark the permalink.