Note: Inspired by this render by Hojojitsu. 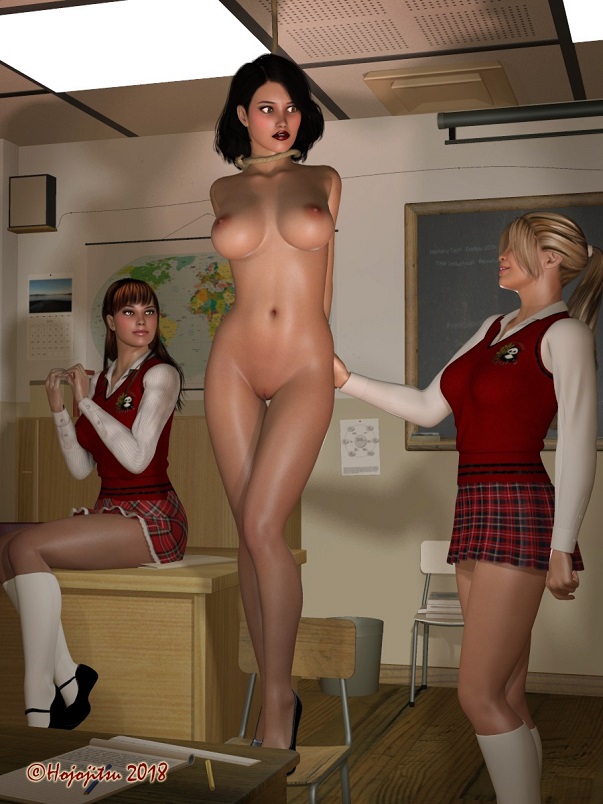 “You wanted to see us, Professor Moore?”

“Yes, Tamara. I’ve had it with you and Sapphire. You girls are always cutting up in class. You’re just not taking Early American History seriously.”

“Sapphire, you’re the worst; always making jokes and flirting with the boys. If you two aren’t interested in taking a history class then why are you sitting in mine?”

“Because we were told we had to have some history credits in order to graduate, professor.”

“Well, you’re not getting any credits out of my class, girls. I’ve tried my best with you. I suggest you drop out and try to enroll in another history class.”

“But we HAVE been paying attention, professor! Why do you have to be such a hard-ass?”

“Girls, whatever you’re ‘paying’ in my class, it certainly isn’t attention.”

“Sure we are,” Sapphire protested as she flung her red hair indignantly. “We learned all about how they hanged all those witches in back in Salam in the 1400’s.”

“You certainly didn’t learn that from my class, girls. And it was the 1600’s. Your noses are always buried in your iPods. But I do commend you for giving it your best shot looking it up on the Internet.”

Sapphire produced a length of hemp out of what looked like an expensive bag, no doubt purchased from one of their many self-proclaimed shopping trips – the bag, not the rope. Tamara pulled a chair up to the front of the class. She climbed on and then tilted up a piece of ceiling tile to expose a thick pipe.

Sapphire handed her the rope which her companion looped over the pipe. Then she began to form one end into a noose. The professor watched with a feeling of growing unease.

“Since when did you girls get interested in hangings?”

“Since reading about the time they hanged witches, professor. It’s really interesting. We thought we’d try to earn a little extra credit by putting on a little demonstration.”

“Girls, I’m really not interested – Hey, what are you doing?? Tamara stop it! Sapphire, what do you think you’re doing??”

“We’re just undressing you, Professor Moore. We heard they hanged the witches back then in their frocks and dresses. But this one website we went to said you should hang a girl nude. See? We know more than you think we do.”

“Sapphire, this is uncalled for. Tamara, you stop this right now – HEY!”

She was too shocked to cry out. Before she knew it they’d forcefully removed everything but her heels. If this was some kind of a joke, they were certainly taking it way too far.

“Girls, I’m going to report you to your faculty advisor for this. You’re out of my class. Hell, you’ll be kicked out of the university over this!”

“Not until we finish with our extra credit demonstration, professor.”

Miss Moore let out a cry as Sapphire bound her wrists tightly behind her back. “Girl’s, this has nothing to do with witches, Salem or American history!”

“That’s ok, professor. We know this isn’t Salem or the 1600’s. We’re just putting on a demonstration of what we’ve learned.”

Professor Moore gasped as Tamara snugged the noose around her neck. “Looks good on you, professor,” the blonde observed with a smirk.

“Let’s get her up on the chair,” Sapphire suggested.

“Girls, no – STOP!” They just got on either side of her and hefted her up. Then Sapphire took the slack out of the noose before securing it as Tamara steadied the frightened professor.

“Oh, we haven’t finished with the demonstration yet, professor. Right, Tamara?” Sapphire chuckled as she sat on the professor’s desk, pulled out a file and began filing her nails.

“That’s right,” the blonde agreed with a dangerous smile as she touched the quivering professor on her bare ass. “There’s just one thing left to do.”

“Actually we learned this from Dr. Tree’s class, professor. You know he teaches Hanging 101, right?”

“I should have known! Did that bastard put you up to this?” Then she crossed her thighs in embarrassment, trying to hide the fearful arousal she felt that was beginning to trickle out of her slit.

“No, professor,” Sapphire told her as she worked her nails. “We came up with this idea all on our own. But he did tell us you should hang a woman nude. Show her, Tamara.”

“Tell us what you think, professor.” And with that the blonde pulled the chair out from underneath.

Professor Moore finally let out a shriek of horror and disbelief. A moment later the chair was gone, her voice choked off. She dropped a few inches until the noose pulled her up short, leaving the tips of her heels a mere four inches above the floor.

“How’d we do, professor?” the blonde asked as the naked woman’s legs scissored. She pedaled as though riding a bicycle. Then she stretched her heels downward as though reaching for the floor again.

“That’s because that one was fake, silly,” Then Tamara asked, “What do you think, professor? Do we get an A for extra credit?”

Miss Moore kicked and twisted, fighting the noose as she jerked her arms up and down behind her back. She rasped for breath, unable to make much more than grunting sounds. Her nipples were painfully erect as moisture dripped out of her slit.

She cross her legs, rubbing her thighs together. “Look at that; she’s getting herself off!” Tamara gasped excitedly.

“That’s nothing,” Sapphire replied with a yawn. “I wriggle more and make more noise than that when Bobby gets me off in the back of his Chevy!”

The professor kicked and struggled until she wore herself out. Her face turned red as she hung limp, her body gently swaying from side to side as she started to twist in place. “So what do you think, professor?” Sapphire asked matter-of-factly. “Is that worth an A or a B?”

There was no response other than drool appearing in her mouth to splatter onto her breasts as her tongue poked out past her lips. “I think she said it’s an A,” Tamara decided. “Let’s go get Professor Tree and bring him back and see what he thinks.”

“I bet he’s gonna love the way we tied the noose and hanged her nude,” Sapphire, agreed with a smile as the two coeds gathered up their bag and left the professor dangling quietly in her classroom. There was silence except for a quiet dripping sound of fluid off heels caused by a bladder giving way.