Just a short one for the guys.

I swung him over the top of the bathtub full of water. By now he knew what awaited him. Could he see my erection under my black clothing?

I smiled as I lowered him down. He took a deep breath before I submerged his head. Some bubbles came up.

I simply held him there to see how long he could take it. When a flurry of bubbles emerged, I pulled up up. He came up gasping for breath.

I smiled knowingly at him. Then I lowered him back down. He gasped for breath before he was submerged again.

I left him down longer as more bubbles came up. By now his cock was starting to harden. At least he was enjoying himself. 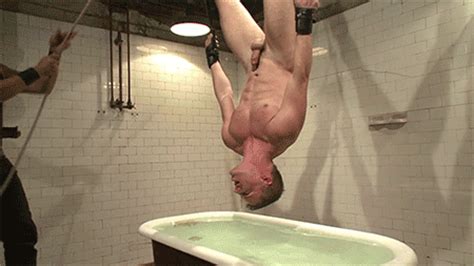 I smiled at him before I lowered him again. I prolonged his time underwater, enjoying the way his cock started to twitch. Then I pulled him back up.

He panted like crazy as he looked at me. I just smiled as I lowered him back down. The bubbles that came up made my cock twitch again.

I kept him down even longer, stalling when all those bubbles came up. Maybe he thought blowing his breath away would make me pull him back up. He thought wrong.

I pulled him up for a quick breath. Then I lowered him yet again. I called down to say the breath he’d just gotten was all he was going to get for a while so he would be wise to hang onto it.

Fewer bubbles came up. I think he was trying to conserve his air. His cock twitched and jerked as he struggled to hold his breath. 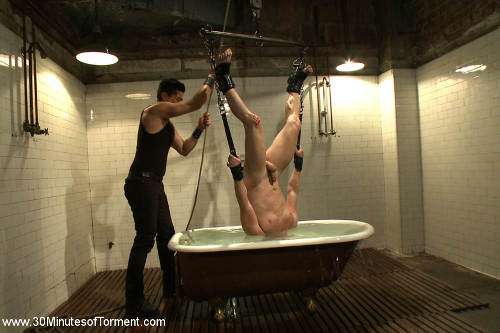 When the bubbles started up again I allowed him to suffer. Then I pulled him back up. I just smiled at him as he coughed and sputtered.

I lowered him right back down, enjoying the way he loudly gasped for breath. Then I reached out to stroke his dick. It twitched in my hand as more bubbles came up.

I let go of his cock and watched as he jerked around a little while struggling to hold his breath. Then I pulled him back up. “Are we having fun yet?” I asked with a chuckle. Then I lowered him back down.

He gasped loudly in an attempt to fill his lungs. By now my cock was uncomfortable in my pants. I decided I might have to do something about that.

I kept him down for as long as I dared. A flurry of bubbles came up, forcing me to pull him to the surface. Then I tied him off as he dangled there.

He panted like crazy as he hung upside down with his head over a foot above the bathtub. Then I pulled out my dick. I smiled cruelly as I chuckled, “How about a last meal before I drown you?”

I stepped forward and pushed it into his mouth. He did not resist me. I think he had detected my bulge. Maybe he wanted to satisfy me, hoping it might earn him a reprieve. Again, he thought wrong.

I stroked his cock as I fucked his mouth. I was already hard and twitching. He was talented enough that it didn’t take long.

I tied him off and left him there. His cock twitched and hardened as he struggled to hold his breath. I couldn’t help stroking mine as I watched him.

It was about a minute and a half before the bubbles started coming up. I saw his chest ripple as he fought to hold his breath. His cheeks bulged as more bubbles came up.

He began to struggle, lifting his head up to get a breath on his own. His face barely broke the surface. He got several breaths until the strain caused him to lower his head back down.

I continued stroking as I watched him. He bubbled and struggled before he lifted his head back up. One more he barely got his face above the surface.

He gasped as he saw me stroking. He looked at my cock as though indicating he would suck it again if only I would pull him back up. I just smiled as I kept stroking.

His head went back down until he was bubbling again. His cock kept twitching and jumping. Then he lifted his head up.

He wasn’t at the surface very long before his head dropped back down. He began twisting his head as his body jerked in its bindings. By now his cock was really twitching and putting on a show.

He appeared to relax as though settling in to conserve his strength. But it was probably less than a minute before he tried to lift his head again. This time he couldn’t get it above the surface.

He lowered it back down for a moment and then tried again. I don’t know if he had a cramp or whether his neck was too tired. But he couldn’t get his head above water.

My cock was hard again, and I stroked as I watched him. He started to struggle even more. I could see his stomach rippling as his chest started to heave.

There was a big burst of bubbles. Then he began to thrash about, losing more air. His cheeks bulged until his last breath exploded out of his mouth.

His mouth opened and closed as though he was trying to breathe. His struggles lessened. That’s when my cock went off, and I sprayed his chest with my cream.

I patted his ass, thanking him for the show. Then I headed upstairs to get a drink. I decided to leave him like that for a while so he could get used to hanging upside down with his head underwater. Hell, maybe he would get lucky and grow some gills.

(Inspired by the pics I found on the Internet and used for illustration purposes.)