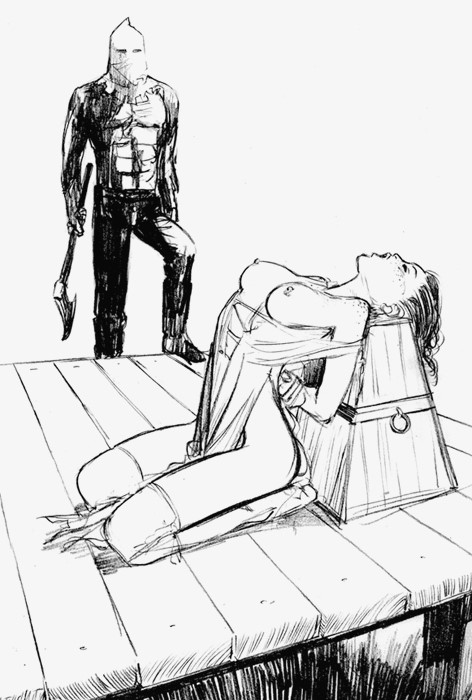 She whimpered as she hyperventilated, struggling just to catch her breath. She couldn’t think clearly; everything was a blur. Surely this couldn’t be happening to her!

She was uncomfortable as hell, kneeling with her back arched. Her head was tipped back, exposing her neck. It was propped up as though supported by something, but she couldn’t seem to move it. Maybe it was her hair, as it felt as though it was caught or snagged on something.

Her flimsy wrap was worthless; her breasts shamefully exposed. At least it covered her crotch. That would have been exposed as well were it not for the way her wrap hung down, covering that area.

She was humiliated by her exposure, humiliated the way her breasts stuck out for all to see. Her nipples had hardened shamefully as a result of her exposure.

She heard murmuring, excited voices out there. She was sure she was being watched. But by how many? How many had come to witness her demise?

Instinctively she tried to rise up. But her hair was snagged on something. It kept her from anything other than remaining in her current, shamefully uncomfortable position.

The event was being delayed. But why? Was it to further humiliate her??

She tried to move her arms. But they had been tied behind her back at the wrists. It forced her chest up and outward, throwing her breasts out. It was so humiliating being exposed like that.

There were more voices. Clearly she was being watched. It further shamed her.

Tears filled her eyes. She could not stop them. They were a wasted effort in any event as there were none sympathetic to her plight.

She heard heavy footsteps nearby. She tried to turn her head to see. But she couldn’t move it. Her neck was meant to remain exposed, and she fully understood the reason.

She heard heavy footsteps climb the wooden structure she now knelt upon. They were getting closer. Was it time?

She began to hyperventilate again. She’d known this moment might be coming. Yet she’d foolishly believed in some small hope that this might be stalled or postponed indefinitely. But that had not happened.

She got a glance out of the corner of her eye. That’s when she let out a shriek upon seeing the axe in his hand and the hood over his head. It was an executioner’s hood. He had indeed come for her.

She began to struggle anew as fear gripped her heart, penetrating to her very soul. But she couldn’t move her head. For some reason she was stuck right where she was.

She felt the terror of the moment begin to overwhelm her. At the same time she felt a perverse excitement. If only she could rise up and run away.

As he approached, she noticed him looking impassively at her as though she was nothing more than an assignment. But she saw something flash in his eyes. He was looking at her breasts.

Was he lusting after her? Did he wish he could take her down and claim her for his own? Did he desire to violate her? If only he would take her back to her cell and violate her! Anything but this!

The other voices and murmurings grew louder. They too must have anticipated the moment was at hand. If only she could find some way to turn back time and undo the actions that had brought her to this moment.

She whimpered with fright as more tears spilled out. Surely this couldn’t be happening to her. She did not want to lose her head in this manner. Someone please say this wasn’t happening to her!

The executioner approached and hovered above her, the wicked looking implement of her demise in his hand. He looked down with soulless eyes at her trembling form. For some reason it terrified her.

She lost her breath again as she struggled to get out little gasps. Her body was trembling violently now. She could not stop shaking.

What if he swung the axe… and it missed? What would she do then? How badly would it hurt??

She let out a terrified squawk as the voices grew louder. She could make them out now. They were calling for blood… her blood.

She tried shaking her head. But her damn hair was hung up against something. She could barely move.

Everything inside her screamed for her to rise up and “RUN”. But she just couldn’t move. She was helpless, left this way on purpose to further her terror and humiliation.

Her nipples were painfully hard. Shamefully, she was dripping copiously between her legs. She kept losing her breath and then trying to recapture it, her chest heaving as she let out little squeaks and whimpers.

She watched him look down upon her, watched as he adjusted his grip on the axe. The voices blended into a unified cry of bloodlust. Then he began to heft the implement of her demise.

She tried shaking her head while stammering, “No… no… no!” Her muscles screamed “FLIGHT”. But still, she couldn’t move.

She trembled violently. Now she experienced painful cramps in her legs. It was getting worse; it was all becoming so much worse.

Every time she tried to jerk her head upward, it went nowhere. More tears streamed down her cheeks. She could not seem to catch her breath.

He finally raised the axe as though sizing up the blow. She stiffened while attempting to stifle a scream. She was sure the crowd wanted to hear her scream.

He lifted the axe higher. The crowd began to roar. Her body screamed “RUN”.

She tried jerking her head up again. But her hair was definitely hooked or attached to something. Gawd; what if he missed??

It took everything she had to stretch her head back, trying to fully expose her neck. Despite her thoughts running away with her, there was one that leapt to the front of her mind…

‘Make sure it only takes one blow…’

She saw the axe swing down. Her eyes widened. She could not help herself; she was going to scre-

Strangely, she couldn’t see anything. Her head had flipped over. She was now facing something that totally blocked her vision.

She was dimly aware of a roar… a multitude of voices… a blood-thirsty roar from somewhere far away. Then she felt her head being lifted, her hair temporarily pulling against her scalp. Her vision cleared; she could see again.

The first thing she saw was her body lying on its side, jerking violently. Blood flowed out of her neck in spurts, pumped out by her dying heart She saw how shamefully hard her nipples were. What’s more, there was a distinct wet spot down in her crotch.

Strange how she could see her body thus…

The weightless feeling returned as she found herself turning. Then she saw them all, applauding and cheering and roaring their approval. Filled with bloodlust, they cried out their enthusiasm over her beheading.

She suddenly experienced the sensation of flying. She was heading outward in the direction of the cheering throng. Hands reached out toward her as though wanting to embrace her.

And He mercifully did…

This entry was posted in Beheading Stories and tagged beheading. Bookmark the permalink.

One Response to Beheading emotions