He could hear Leslie Undercott’s voice all the way across the field. She was angry her son wasn’t where she thought he was supposed to be. It didn’t matter if Coach Kohl had been doing this for ten years.

After the game she tracked him down and gave him a good piece of her mind. He’d better play her Timmy during a majority of their next outing. Otherwise, she was going to complain to the school board.

It was bad enough Miss Undercott was causing such a fuss. But now it was starting to empower the other mothers into complaining as well. If he didn’t do something soon, he was going to end up surrounded by a brood of cackling hens, all of them demanding equal time for their own sons.

The phone call later that afternoon didn’t help matters any. Miss Undercott was going to call the school administrator on Monday. But first, she wanted to give Coach Kohl a chance to come to his senses.

He offered an olive branch by inviting her out to his property. There he would discuss things with her. She told him she would be willing to listen just as long as she heard the words “Timmy will play a full game next week.”

She drove out alone to his property on the edge of the woods. She found Coach Kohl out back kicking a soccer ball into a goal in his large back yard. He sometimes had the kids out for a little practice where he could teach them drills.

Leslie Undercott marched right out there to have a word with him. She explained how her Timmy was the best player on the team. What he was doing by not allowing her son to play more often was criminal.

Coach Kohl tried to explain her son’s shortcomings. He just needed a little more practice and a little bit of an attitude adjustment when it came to sharing the ball. Miss Undercott demanded his assurance her son would be starting the next game or she would be going to the school administrator.

Coach Kohl went over and picked up the soccer ball along with a piece of wood which had been lying on the ground near the back of the goal. He carried it over to her and placed it on the goal line below the bar directly above. Then he smiled as he asked, “Miss Undercott, I need a little help with your son. Can I count on your cooperation?”

She snorted, “Obviously you need a lot of help. I’m not sure I’m the one who can help you though.”

“Oh, I think you can.” Then he went over and picked up some rope that had been lying in a corner of the goal.

He threw it over the cross bar to the goal above. The end came down in the form of a noose. He made sure it dangled directly over the piece of wood and the soccer ball lying on the ground.

Miss Undercott looked at the noose in shock. “What the hell is that for?”

“I told you I need your help, Miss Undercott.” Then he proceeded to loop the noose over her head.

She let out a squawk before reaching up for the coil around her throat to pull it off. He just pulled it tight until she was almost up on her tiptoes. She rasped, “What the hell are you doing?”

She rasped as she shuffled around on her toes. That’s when he began stripping her of her garments. A part of her tried to resist. But she was partially strangled to the point where she was more concerned over the coil that was threatening to strangle her than with him undressing her.

“And now for that ‘balance’ I was referring to, Miss Undercott.”

He placed the piece of wood on top of the soccer ball. “Now step up, Miss Undercott. I need to show you how this balance is going to work between you and me from now on.”

“Suit yourself.” Then he began to pull harder on the rope.

She gawked as her feet left the lawn. He lowered her back down and worked to hold the piece of wood on top of the soccer ball for her. Then he pulled on the rope again.

She tried to resist him, only to find her breath being cut off. Instinctively she stepped up onto the piece of wood. Her balance proved to be even worse up there.

“Much better, Miss Undercott. Now try both feet. We need to work on this ‘balance’ situation.”

Coach Kohl’s cock began to bulge through his shorts. “Now you see the problem, Miss Undercott? You’re trying to act as coach for this team. That puts you in a rather precarious position. Am I right?”

Her feet shuffled a little. Miss Undercott almost lost her balance. She let out a cry as she tried to retain some sort of footing on her toes.

Her legs trembled as her feet wriggled. She kept trying to use her hands to steady herself. But the piece of wood threatened to go out sideways, making her cry out as she tried to maintain her balance. What’s more, she was now experiencing a shameful arousal, the results of which was dripping visibly out of her crotch.

“Do you see now, Miss Undercott? One false move and it all goes to shit. Do you see how hard it can be to try balancing these things, especially when you’re not that knowledgeable?”

“Now if that ball were to be kicked away, you wouldn’t have a leg to stand on anymore. Soccer would be your ultimate downfall. Isn’t that right?”

“Something just occurred to me. I really don’t think the other mothers would give much of a damn if you never showed up at a game again. What do you think, Miss. Undercott? You think they would miss a bitch like you?”

“Now let me get this straight. I’m the coach. And you’re the mother. You trust me to teach your son how to play soccer. Isn’t that right?”

“Very well, Miss Undercott.” Then he kicked the ball away.

Her hands instantly flew up to her throat as she tried pulling on the noose. She kicked as her naked body swung back and forth. Coach Kohl came around front and watched her dance until a stain appeared in his shorts.

Miss Undercott’s knees came up in a reflexive manner. Her pain triggered a shameful climax right in front of the man. It embarrassed and humiliated her.

Coach Kohl stepped forward as her struggles lessened. He fingered her crotch, noticing how sticky it had become. “I trust this will be the last time we have this conversation, Miss Undercott?”

She barely acknowledged his words. Then he calmly walked behind her. She was sure she was going to be left dangling from the soccer goal in his back yard until such time as he could find a way to dispose of her body.

The noose above her suddenly gave way. She crumpled onto the ground in a heap. Coach Kohl came up to her and loosened the noose from around her throat, allowing her to rasp for breath.

“I’ll give you a few minutes to compose yourself, Miss Undercott. Then I want you to kindly get back into your clothes before getting the hell off my property. I trust we will not have this discussion again?”

She coughed before looking up at him with a mixture of fear and uncertainty. Something flashed in her eyes. He saw what was displayed there and immediately glared angrily at her.

“Rest assured, Miss Undercott. One word of this to anyone and I swear I’ll find you, bring you back here, and finish what we started. Do I make myself clear?”

She lowered her head before nodding in shame. Then she began to put her clothes back on. Somehow she managed to make her way back to her car before driving off.

Timmy got better and began playing more minutes with the team. Miss Undercott never spoke out again about her son’s playing time. Instead, she became Coach Kohl’s strongest supporter.

There was one small side effect though. Every now and then she would make a discreet trip out to Coach Kohl’s property. 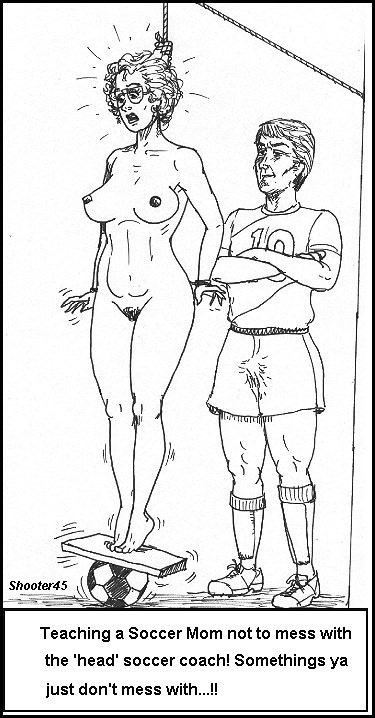