The party was over. Those living in the states were making their way to Heathrow to catch their flights back home. That left Delbert and I.

Our flights weren’t scheduled until much later. Thus, Wendy offered to host us a few hours longer. We were appreciative of her hospitality.

She usually took it easy after her pool parties. It was exhausting for her to be underwater so much. So it caught Del and I totally by surprise when she offered to do a private little session just for the two of us.

Del was more than agreeable. Then again, so was I. We were flattered Wendy wanted to get wet for us one last time.

The problem was: I always got aroused whenever Wendy was in the water. I usually did my best to conceal my excitement. But I was not always successful. I caught her smiling at me on more than one occasion whenever my enthusiasms were showing in my trunks a bit too much.

Del was no different. I don’t think he tried all that hard to hide his bulge. Wearing Speedos certainly didn’t help matters any.

We helped Wendy set up a couple of air hoses. Del got his video equipment ready. Then we went and changed into our suits.

We were out by the pool talking about how lucky we were when Wendy appeared. She was wearing her shiny pink one-piece. The way it tightly hugged her curves caused a familiar stirring in my trunks.

We started off innocently enough. We swam around together, mostly horsing around. Del and I even grabbed one of her arms. But that caused Wendy to play-act for us by struggling in our grasp.

My bulge quickly became noticeable. Del’s was so obvious a blind man would have seen it. Wendy smiled innocently, but the expression on her face indicated she loved the effect she was having on us.

She offered to let Del take some video before we had to catch our flight. I laid flat on my back while wearing ankle weights. Del shot the scene as Wendy straddled me with the regulator between her lips, pushing down on my arms as though she was drowning me.

Afterwards, we switched positions. I was the one with the reg in my mouth straddling her while pushing her flat on her back on the floor of the pool. She spewed an exciting amount of bubbles as she struggled for me. When she motioned for the regulator I took it out of my mouth and gave it to her.

Del wanted a turn with Wendy. So I operated his video gear so he’d have some digital memories of his time in the water with her. Wendy play-acted with him as well, and I dutifully recorded it all.

We finally surfaced for a break. Del and I were thinking it was getting close to calling it a day. After all, we had a plane to catch.

Wendy offered one more scenario for Delbert to film, one he couldn’t say no to. I think she loved seeing the bulge in his speedos. So she fetched little yellow weights for her wrists and ankles.

She put the regulator between her lips. Then down she went. Del followed her down and started taking video.

I swam down to see Wendy sprawled out on her back. The weights to her wrists and ankles were holding her to the bottom of the pool. She exhaled breath after breath in a sultry pose as Del shot all the video he wanted. 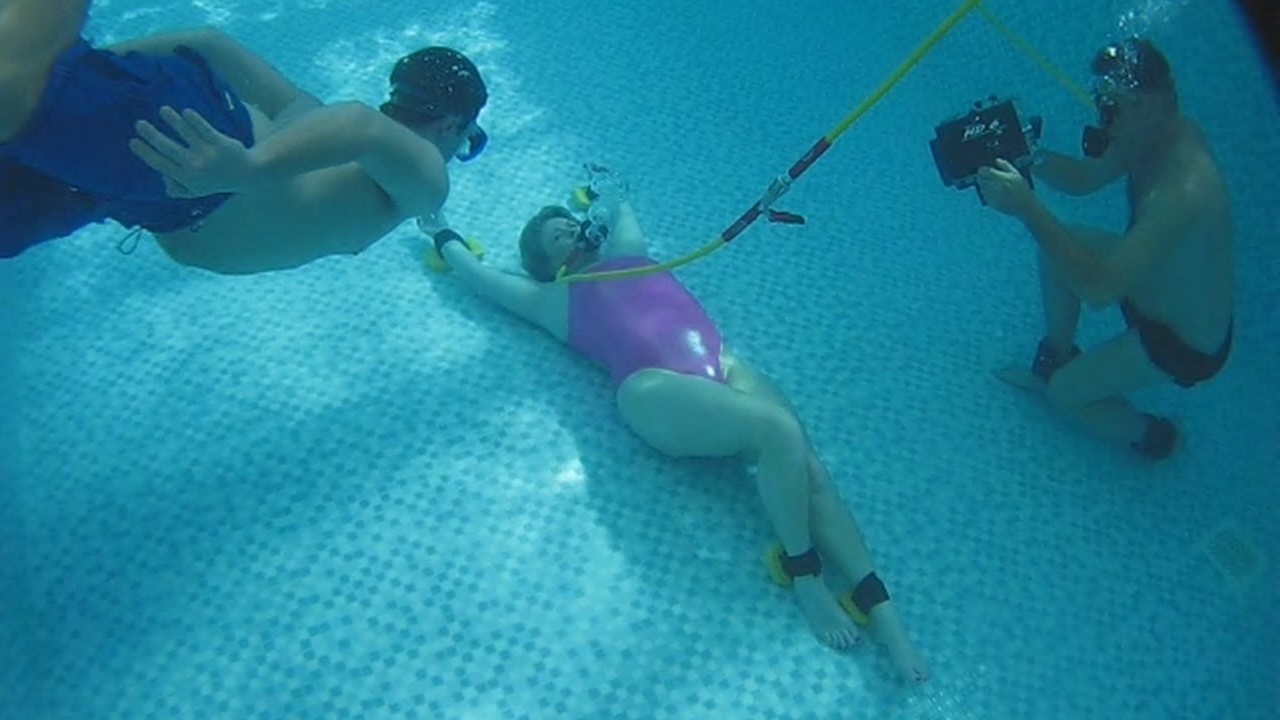 I took the regulator from Wendy’s mouth so I could stay on the bottom with her. She playfully posed as Del got more footage. That’s when I was tempted to be a little naughty.

After filling my lungs I held the regulator between Wendy’s legs as she grinned and bubbled. Then I purged it into her crotch. She wriggled and squirmed with a huge grin on her face as though she didn’t mind in the slightest. 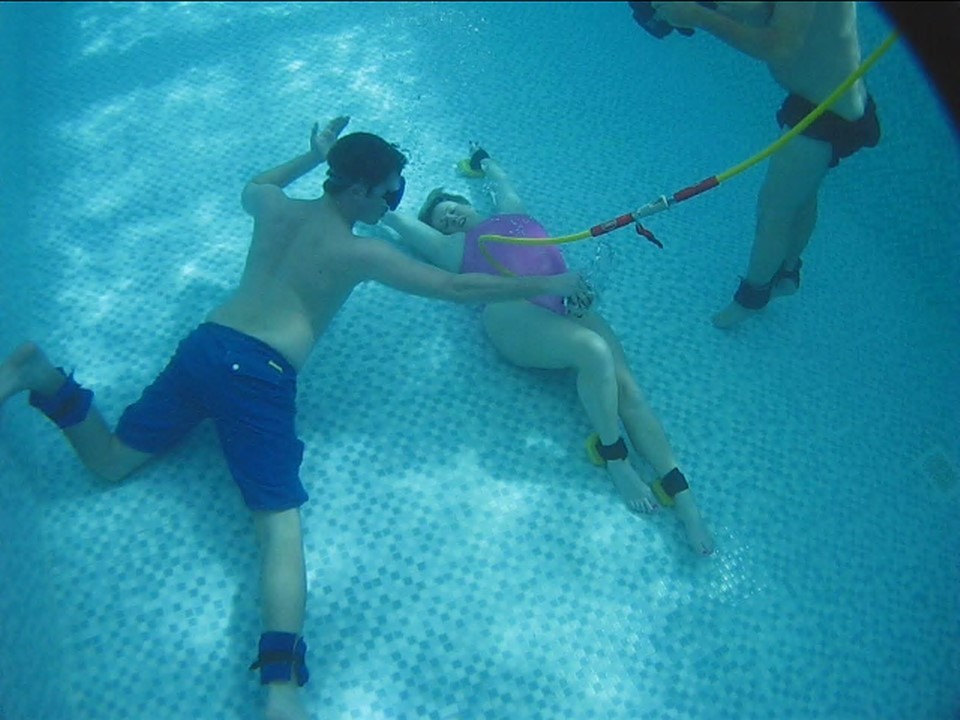 I breathed from the regulator as Wendy posed provocatively. Delbert’s erection was plainly visible in his speedos. I didn’t even bother trying to hide my own “enthusiasms”. 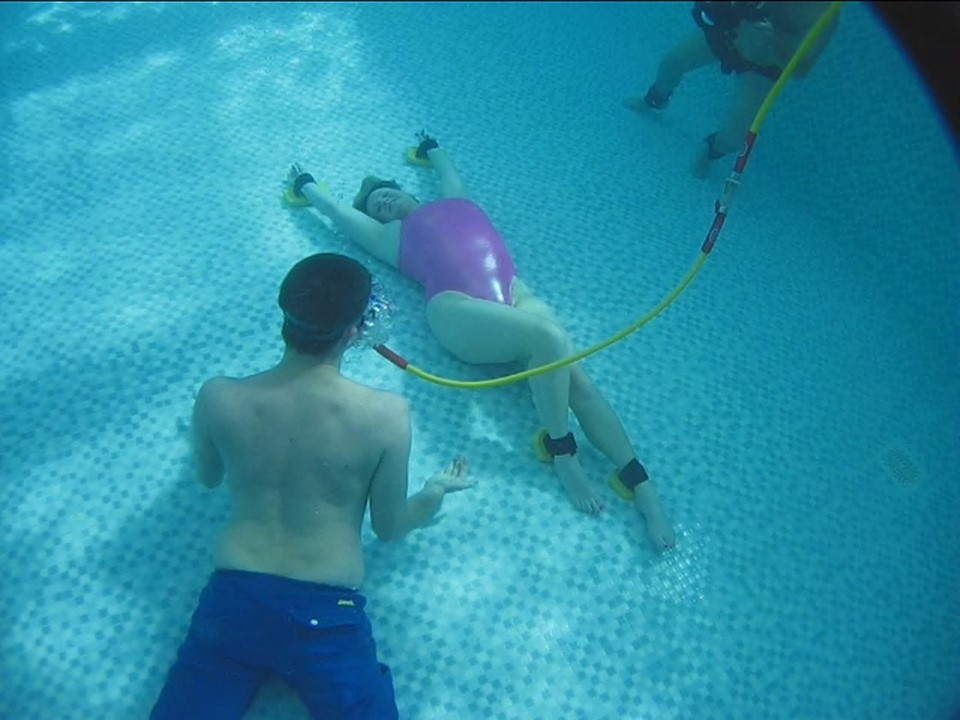 Wendy motioned for the regulator and I put it between her lips. She took several hits off it to replenish her lungs. Then I pulled it out of her mouth.

I used it to purge bubbles all over her. Wendy writhed and bubbled as though she was all turned on. It was arousing as hell. 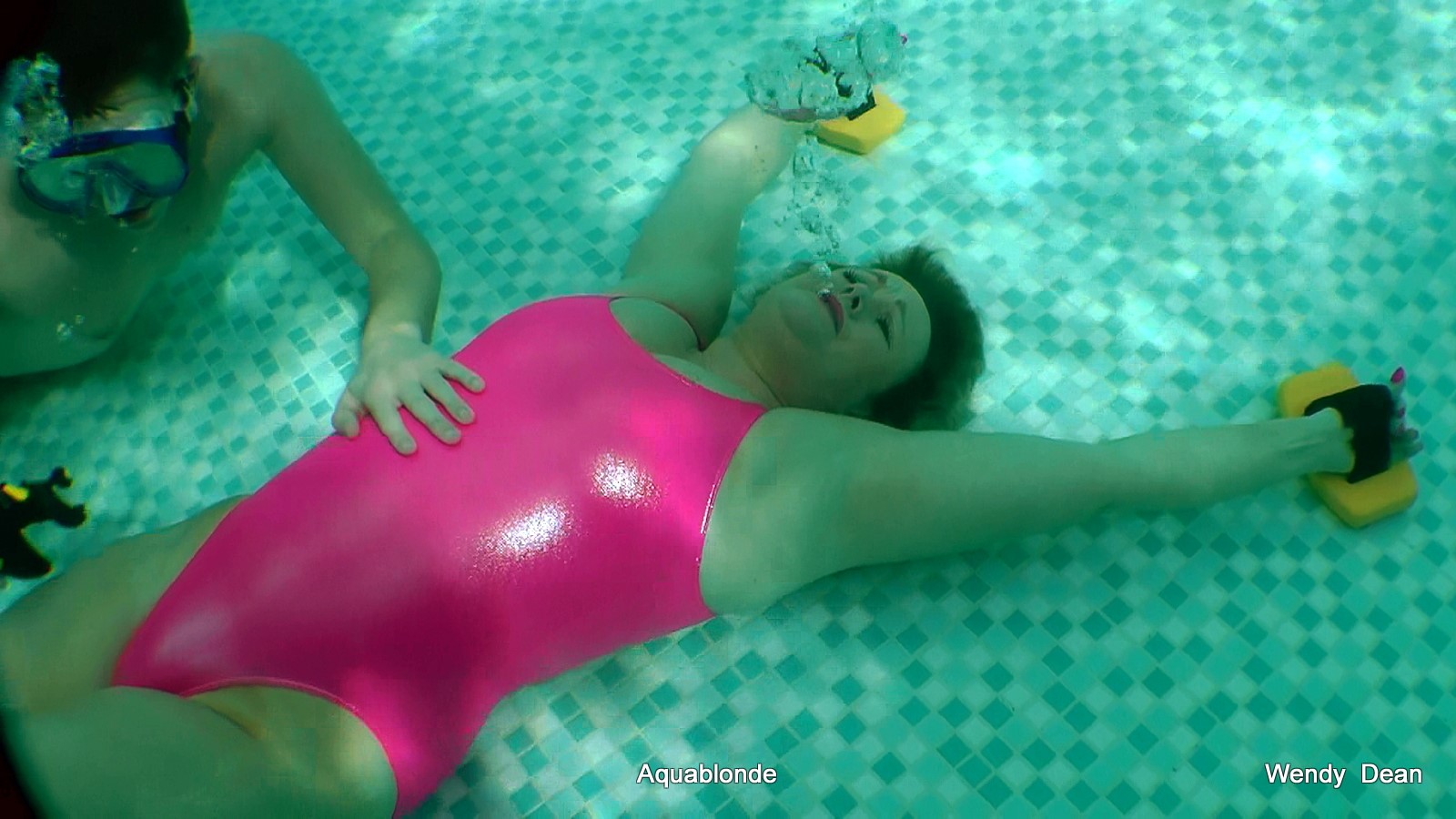 Delbert motioned he wanted a turn. I put the regulator in Wendy’s mouth and then moved over to his position. He gave me the video gear and his regulator which I put between my lips.

Delbert caressed Wendy all over. It wasn’t overtly sexual, but it wasn’t all that innocent either. She noticed his bulging speedos and grinned at him.

He took the regulator from her mouth and put it between his lips. Then he caressed her some more. That’s when Wendy gave him this knowing grin.

She motioned she needed the regulator again. He put it into her mouth and watched as she took several deep breaths. Then he took it from her and put it between his lips.

Del went back to caressing her all over. That’s when Wendy went into one of her “drowning” acts. She hitched and gurgled as she released a ton of bubbles. 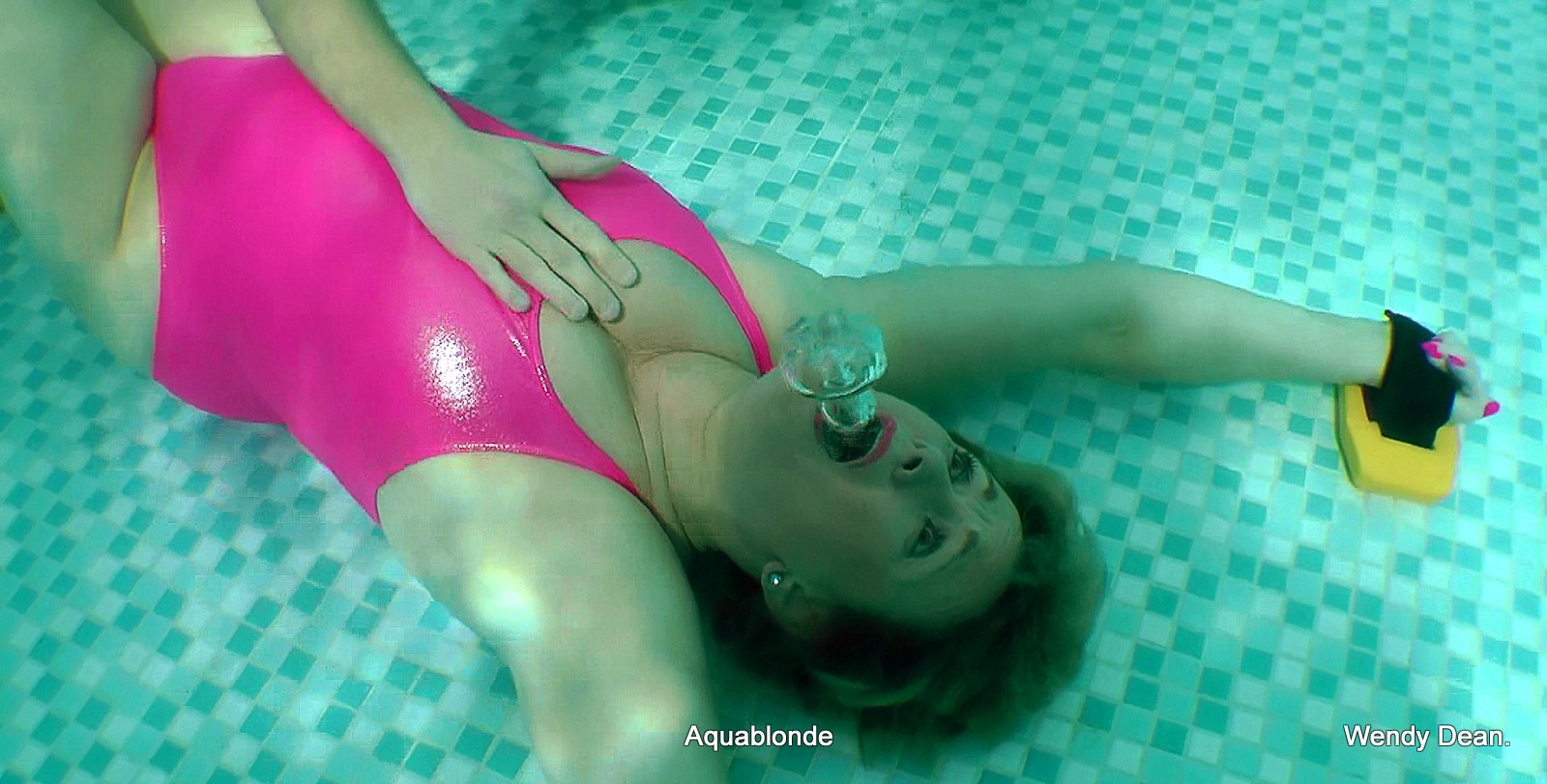 It looked pretty damned realistic… and it was sexy as hell. I dutifully recorded it all. Then Wendy went limp.

She held her breath for a few seconds, her eyes wide as she vacantly stared upward. Then she motioned for the regulator. Delbert dutifully returned it to her.

She breathed deeply as she looked at his crotch. Then she looked at mine. She grinned again as though enjoying the effect she was having on us.

Delbert looked at me and made a slashing motion across his neck. He motioned for me to record it all. I made sure I had Wendy in focus, not at all certain what he was planning.

He took the regulator from her mouth and put it between his lips. Then he caressed her all over again. Wendy twisted, writhed and bubbled as though loving every moment.

She mouthed in his direction as though needing the regulator again. Delbert smiled and nodded as he grasped onto the reg in his mouth. But he delayed giving it to her.

She grunted and bubbled, clearly indicating she needed it. I simply kept recording, wondering what was going to happen next. Delbert just smiled with the regulator still between his lips.

Wendy sat up and motioned she was out of air. Then she tried to stretch out toward Delbert. He just backed out of her reach.

She looked in my direction, an expression of alarm in her features. Then she started to get to her feet. She had just kicked hard off the bottom when Del grabbed her legs and held on tight.

The panic in Wendy’s expression was genuine; she certainly wasn’t play-acting. She shook her head as she lost more bubbles. But Delbert refused to let go.

At first I didn’t know what to do. My cock was throbbing in my trunks. I finally concluded I was just the equipment operator and this was Delbert’s show.

Wendy suddenly gulped a huge mouthful of water. Almost immediately she went into these seizures. She hitched and gurgled, her face a mask of shock and incredulity.

It was somehow different from all her other performances. This was raw and guttural. It looked like she was really drowning painfully. I shamefully creamed myself as I recorded the event.

Delbert hung on to her until she stopped struggling. He let go as she toppled over onto her back. The yellow weights pinned her arms and legs to the floor of the pool.

I kept recording as she lay sprawled out on her back. There were little muscles spasms here and there. Occasionally a bubble or two would slip out of her gaping mouth as she stared upward with lifeless eyes.

Delbert motioned for us to head to the surface. I gestured toward Wendy in question. He just shook his head.

He left his regulator close to Wendy’s head. Then we headed for the surface. “Did you get it?” he asked when our heads were out of the water.

“Got it,” I said as we climbed out of the pool. “But what about Wendy?”

“She went for a swim and was playing with those weights when she had an accident. See the regulator down there? Maybe she got a cramp or got tired or something and couldn’t reach it.”

I looked at him for the longest time. “Are you sure, Delbert?” He just smiled as he told me I would get a copy of the video taken from his equipment so long as I didn’t share it with anyone. I decided not to push the issue any further.

(Inspired by the pictures Wendy posted.)

This entry was posted in Drowning Stories and tagged drowning, pictures. Bookmark the permalink.