Wendy stepped through the door into her indoor pool, looking with longing at the water. She was glad they’d moved into a home with an indoor pool. The weather could be miserable outside, but now she could enjoy the water as though on a beach in the Caribbean.

She walked up to the edge of the deep end and looked down into the water. She used the pool often, and she was already beginning to feel the urge for another swim. She knelt down and ran her hand back and forth in the water, feeling the temperature…

Ooh; just right! In fact a cool swim might do her good. She’d been a bit warm lately; maybe the thermostat in the house was set a little too high.

She splashed some water up in the direction of her face and neck, smiling as she imagined herself swimming along the bottom blowing bubbles. She splashed a little more on herself, appreciating how good it felt. She splashed even more, deciding a swim should definitely be put on her list of things to do today…

She touched her necklace, checking to see if it was all right. She assumed it was, although she didn’t know if it was waterproof or not. And she wasn’t sure how it would react to chlorine. She gave it a tug, wondering if perhaps she shouldn’t have splashed water on it in the first place…

She let out a startled cry as it suddenly came loose in her hand. Before she could react she saw it drop into the water. Wendy instinctively knelt down as though reaching out for it, but it was too late. She saw it sink straight for the bottom, dropping right down toward the …

“NO; NOT THE DRAIN??!!” Wendy instinctively reached down into the water, not that it would do any good now. A moment later she saw it slither toward the drain like a snake in search of its den. It found the drain, and immediately crawled through, much to her consternation…

Hell; that wasn’t good at all! That was a necklace she really liked! Not only that, she’d previously been alerted to the fact that it might be coming loose on her! Now she’d splashed water on it, and the chlorine must have sealed the deal by weakening the chain enough to cause it to separate.

Wendy signed, mentally cursing herself. Well, there was nothing for it now but to go in after it. She almost dove in right then and there, but she stopped herself.

“Silly woman,” she chided herself. “Go put your suit on. You were going for a swim anyway. No use in getting your clothes all wet now, is there?” So she got up and went back into the house to change.

At first she took her time, looking for just the right suit to wear. She found her black one-piece; that would do nicely. But as she began to change she found herself hurrying, suddenly fearful what the chlorine in the water might be doing to her necklace.

She finished changing and then rushed out of the bedroom back to the indoor pool. She did not need to retrieve a towel from the bathroom; she kept the pool room stocked with those. Besides, she needed to get back to her necklace!

She rushed back into the pool room and went straight for the cabinet over in the corner. It contained some cleaning accessories as well as pool toys for when friends and family came over. She grabbed a set of goggles for her eyes and then snatched up a black weight belt.

She usually had no problem getting to the bottom. But unless she wore a little extra something to help her stay down, she would have the tendency to drift back up. She had no idea how long she would be on the bottom trying to fish her necklace out of that drain. But the weight belt would certainly counteract her natural buoyancy and help keep her from drifting around down there.

She adjusted the belt around her waist and then pulled the goggles down over her eyes. Once more she thought about her necklace, wondering what the chlorine might be doing to it. That made her anxious enough to jump right off the edge of the pool into the deep end with a splash.

She swam right down, the belt making it easy to quickly reach the bottom. She moved right over the pool drain and looked inside. She could see a part of the necklace hanging up on something. At least it hadn’t fallen any further down. With any luck she just might be able to fish it back out of there!

She stretched out on her tummy and reached in with her fingers. She could touch it; she just couldn’t get a good grip on it. She worked it around with her fingers, trying to maneuver it in such a manner that she could work it out of the drain.

It wasn’t long until she could feel the strain in her lungs. It was taking longer than she’d expected. She was worried about her necklace now, concerned over the kind of effect the chlorine in the pool might be having on it. But she was just about out of breath!

With a grunt of frustration she blew away what was left in her lungs as she pushed off for the surface. She kicked up, pulling hard with her arms until she burst up gasping for breath. Wendy swam over to the side of the pool and clung to the edge, panting heavily.

She spent a few moments working the problem over in her mind as she got her breath back: how to work it up, get a better grasp on it, move it around and then work the end of it up out of the drain. From there she could grab it and pull it right out. She would just need to hold her breath long enough to accomplish the task at hand.

She wanted to stay at the surface longer, but she was worried about her necklace. Besides, she figured she should be able to hold her breath long enough to snag it this time. Wendy inhaled deeply and then went back down, allowing a little air to trickle out past her lips.

She swam down to the bottom where she stretched out and peered down into the drain. She stuck her fingers down through the grate and began working her necklace around again. She could touch it; she could move it around a bit. She just needed a better grip is all.

She pushed her fingers a little deeper into the drain, grasping a part of the necklace and working it against the inside of the drain. Little by little she fingered it upward like a worm inching its head up. She managed to poke the end of it up out of the drain enough to grab it with her other hand. Then she pulled it free…

She grunted in surprise as her fingers hung up in the grate. She could get all of them out with the exception of the middle one! She grunted and pulled, feeling a jolt of alarm.

No, this can’t be happening! I got them in; I can certainly get them back out! But her finger refused to come out… and her lungs were starting to burn.

Wendy tried to twist her finger, tried to carefully work it free. But it was the knuckle that was causing the issue. For some reason her middle finger had gone in, but it didn’t want to come back out!

She grunted as she tugged harder, feeling a little more anxious. She was running out of breath; she’d been down quite a while. But her finger was refusing to cooperate!

She winced as she tugged on it even harder, grunting and umming. But the grate refused to release her finger… and she was really running out of air now! She could feel the panic start to well up inside her as she tugged and tugged, jerking harder and harder as she became more anxious… 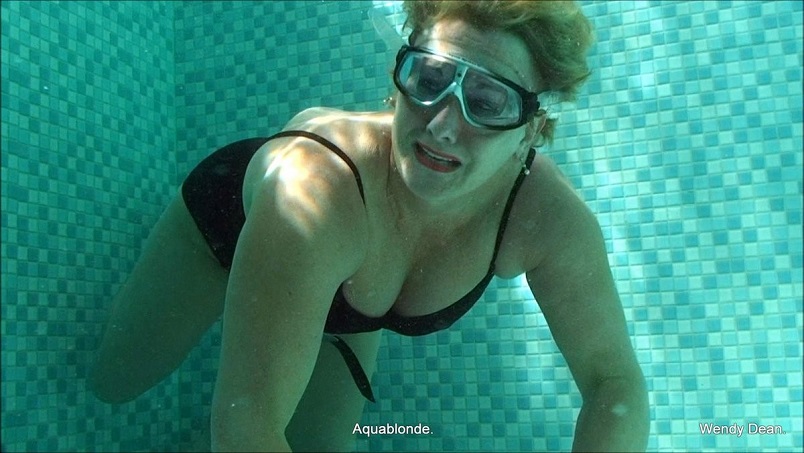 She felt an ominous contraction in her stomach, causing her to jerk even harder. Then she looked down and saw… no; is it swollen now?? Noo!!

There was another contraction in her stomach that moved up into her chest. She could feel her lungs having, demanding to be refilled. She jerked harder and harder, grunting and bubbling as she grew more and more anxious… felt the panic start to rise up within her. 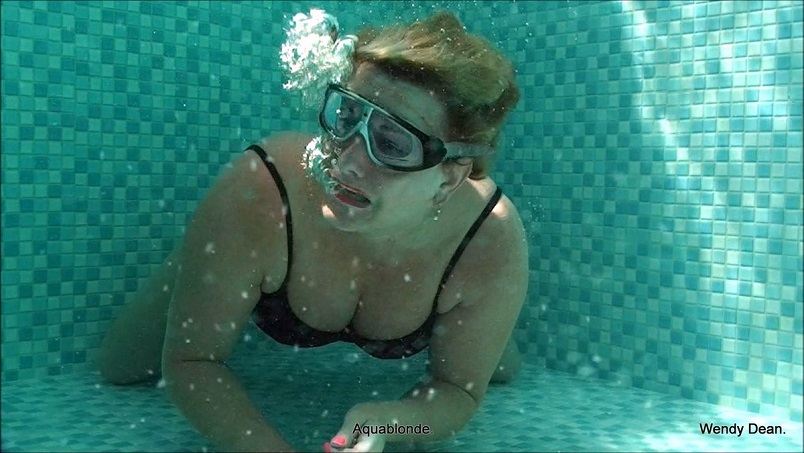 She frantically jerked her hand upward, her lungs on fire as she tried to extricate herself. Her body wanted to exhale and then retrieve a fresh breath. She put a hand over her mouth as though she could somehow contain the air wanting to check out of her lungs!

She coughed up bubbles, causing her to frantically jerk on her hand. But the knuckle had truly swollen now, too thick for her to be able to pull it back out on her own. She would need to pull the grating off the drain… and it was screwed down tight!

Wendy let out a cry of horror, losing more bubbles. She jerked and jerked, causing the knuckle to rub and bleed a little as her lungs screamed in her chest. She looked up at the surface of the pool, instinctively waving at it as though waving for someone to come to her aid. Then she felt a massive contraction in her stomach, a warning contraction that migrated up into her chest causing her lungs to heave painfully.

Wendy’s cheeks bulged as she fought to hold the last of her air, her mind screaming for someone to come save her. Then that last breath burst out of her mouth as she convulsed painfully. She could not prevent her body from inhaling reflexively.

The first gulp of water down her windpipe caused her to cough, instinctively making her inhale again. That triggered a series of convulsions as her body wanted to inhale and yet wanted to expel the liquid flowing down into her lungs. Wendy began coughing and spasming, her body reacting violently to the water filling her lungs and being absorbed into the soft tissue.

She coughed and convulsed, her body jerking painfully each time she inhaled. She winced in agony, her eyes reflecting the suffering she was enduring as she coughed up more bubbles. Then she was coughing up water, only to suck more right back down into her lungs.

Wendy spasmed painfully and then started to settle onto the pool floor, her arm tethered to the grate covering the drain by her middle finger. Her free arm stretched outward as though reaching out for some unseen rescuer. Her mouth gaped open, her eyes wide from the horror of it all. Then the expression in her face softened a little as the life winked out of her eyes.

Wendy lay stretched out on the pool floor, staring vacantly with a horrified expression on her face. The broken necklace lay on the floor of the pool right next to her. It would be another couple of hours before her husband would come home to find her like that at the bottom of their indoor pool…

This entry was posted in Drowning Stories and tagged drowning. Bookmark the permalink.