“Ladies and gentlemen, my name is Kamisol Harris. It is my great privilege to hang a lovely lady for you tonight. Her body will be roasted at a special dinner tomorrow at the Phi Omicron Ro Nu sorority. You are all invited to attend. Without further ado, allow me to introduce the star of our show tonight. Ladies and gentlemen… Marzai Pipsin!”

A bubbly 18 year old came out onto the stage. She had fluffy pigtails with pink flowers serving as ribbons. She was wearing a see-through white sweater with a black print skirt. Black leggings and soft grey footwear completed her attire.

She received a lot of applause as she came up to Kamisol. She glanced at the noose dangling from the ceiling as well as the platform embedded in the floor. Then she happily waved at the applauding spectators. 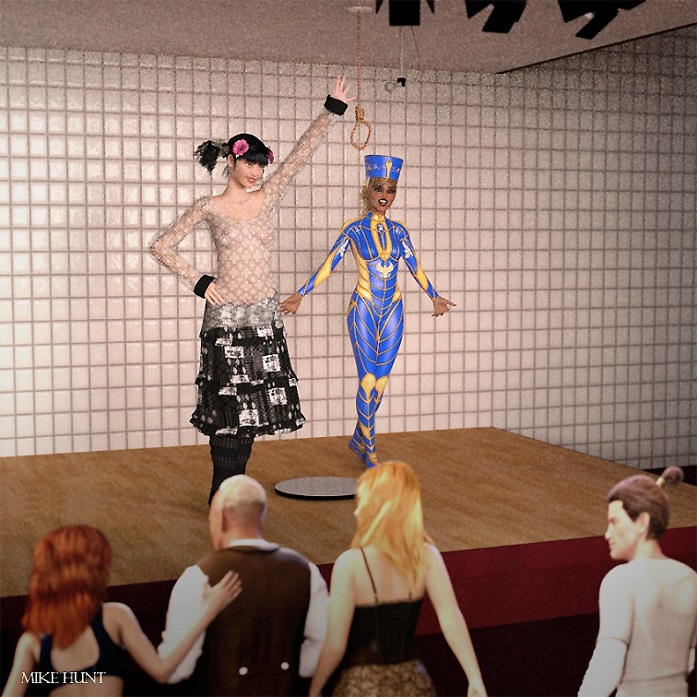 “Marzai is here to hang for your entertainment, ladies and gentlemen. She has graciously decided to hang nude for us. Let’s cheer her on as she undresses for us, shall we?”

Music started to play, piped in through the speakers. The 18 year old worked herself out of her sweater. Then she motioned grandly at the cheers and catcalls she received. 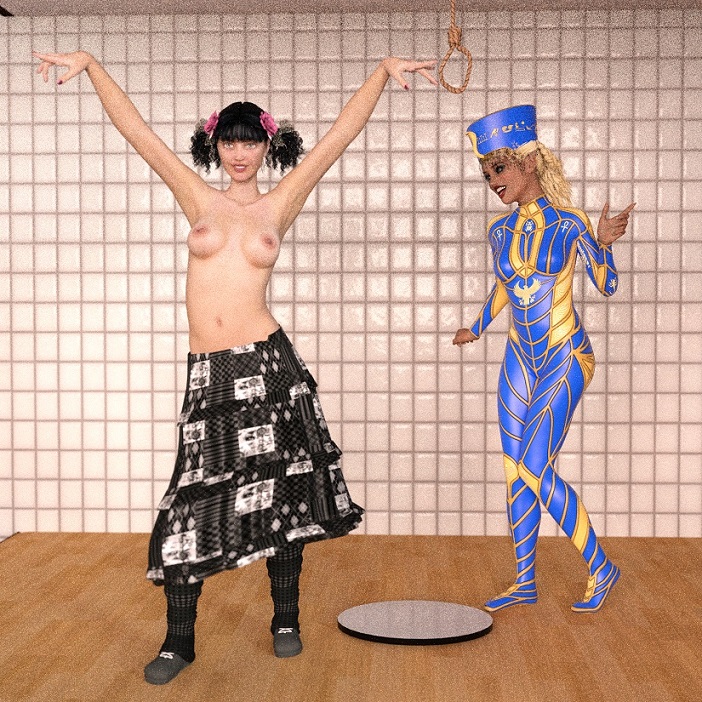 The skirt was next to go. When it had been removed, Marzai stepped onto the circular platform embedded in the floor. The noose was right there framing her face. So was a microphone that hung down from the ceiling.

“Why don’t you say a few words to our guests, Marzai?”

“Be glad to, Kamisol. I’m so excited to be hanging for you all tonight. My sisters at the sorority voted me to take part in this very exciting moment. So I really hope I hang well for you tonight.”

“I’m sure you will, Marzai,” Kamisol said with a smile. “Let’s give her a big hand, shall we?”

The audience clapped and cheered. Marzai beamed with pride and excitement. Her nipples hardened as her crotch began to moisten from a fearful arousal. 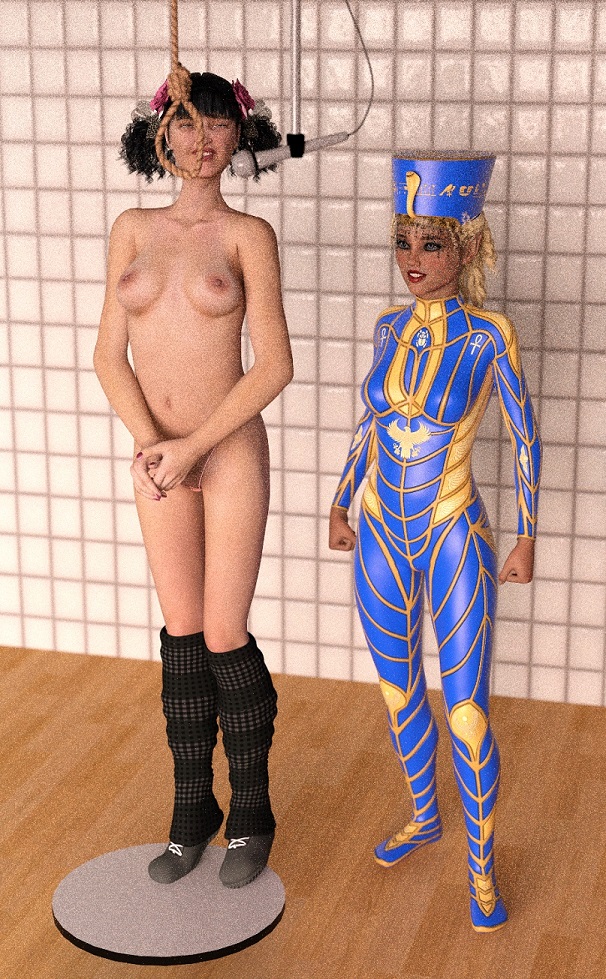 “Those leggings will never do,” Kamisol told her. “Let’s bring out something better, shall we?”

At that moment a female assistant appeared, another of the Phi Omicron Ro Nu sisters. She brought out a pair of black heels. They were insane in their height.

Marzai looked at them with the faintest flicker of doubt in her expression. Then she smiled as she removed her leggings and footwear. She struggled to get herself into the crazy heels.

Once more she stood on the platform. “How do you feel now?” Kamisol asked.

“Excited and nervous,” Marzai said into the microphone as she struggled to maintain her balance.

“We can’t have you hang without including a little bondage, can we?” Then she turned to the audience. “Let’s grab a little rope to string our sexy hangee up right, shall we?”

The assistant returned a second time. In her hands was a large length of rope. She and Kamisol proceeded to secure Marzai with it as the 18 year old stood precariously on her heels on the platform.

Marzai’s arms were crossed behind her back. Her wrists were tied together. Then she was roped below and above her breasts to add to the bondage effect.

The assistant left as Kamisol looped the noose around the 18 year old’s neck. Marzai shivered from a combination of nerves and excitement. She struggled to balance on her precarious heels.

“You look lovely,” Kamisol told her. “Doesn’t she look lovely, folks?” There were more cheers and applause.

Marzai blushed. Then her legs wobbled. She almost lost her footing.

Kamisol reached out to steady her. “Don’t fall, Marzai. We want to watch you strangle to death. We don’t want you to literally break a leg out here on our stage, right?”

“Are you ready, Marzai? Shall we get you ready to hang?”

“Then let’s get you elevated, shall we?”

Kamisol waved grandly at the audience. A moment later there were murmurs of excitement as the circular platform Marzai stood upon began to rise. Once more she wobbled on her heels.

The noose went up with her as the slack was slowly taken out. So did the microphone. It stayed close to her mouth the entire time.

The stool stopped a couple feet off the floor. Marzai wobbled again. Once more Kamisol reached out to steady her.

“You’re none too stable on those heels; eh, Marzai?”

“I g-guess I’m not,” she stammered nervously.

“Make sure you talk into the microphone so our guests can here you. How do you feel up there?”

“N-nervous I guess.” Then she thought of where she was and the task expected of her. She remembered to add, “…and excited… nervous and excited. I’m excited t-to be here t-tonight to hang for you all.” 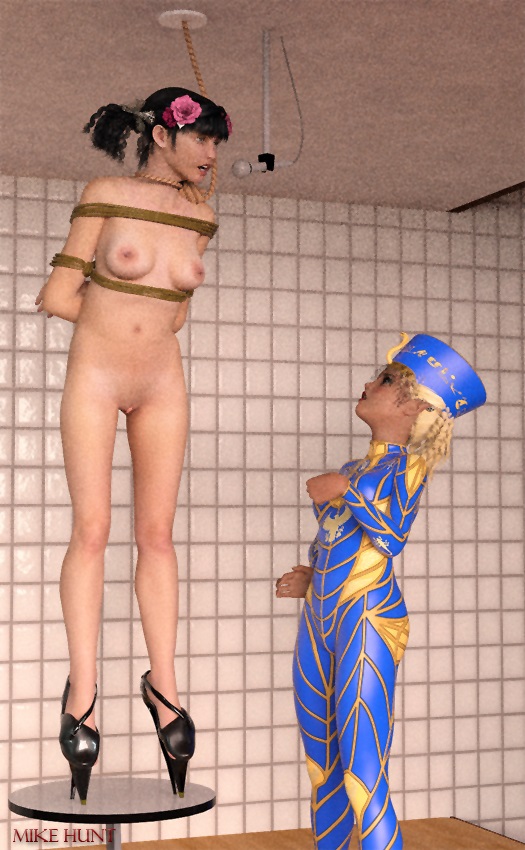 “We’re excited to have you hang for us, Marzai. Isn’t that right, folks?” The audience clapped and cheered in reply.

Kamisol put her hands on her hips. “Is everybody ready to watch Marzai Pipsin hang for us?” The crowd cheered.

“I can’t hear you. I said, ‘Is everybody ready to watch Marzai Pipsin hang for us?’”

“Then let’s watch her hang!”

At that moment the stool began to lower back to the floor. It fell away from Marzai’s extremely high heels. Her legs spread in search of solid footing as the noose took her full weight until her head had tipped to one side. 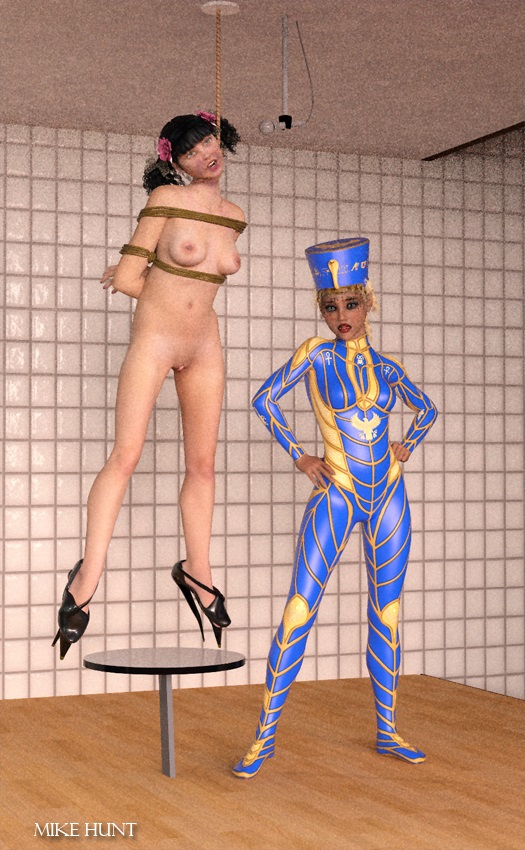 The stool continued to drop until it reached the floor. Marzai’s heels attempted to stretch down as though she could reach it. Then her legs began to pedal as she went into her dance. Kamisol couldn’t help lifting a leg, posing for the crowd as they watched the hanging. 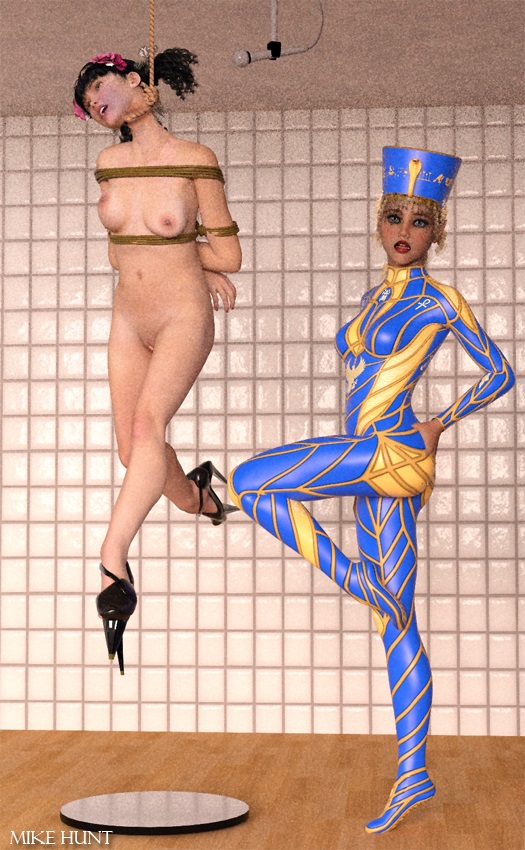 Marzai kicked and struggled as she suffered in the noose. She knew she was going to hang. But the experience was not quite what she’d anticipated. For one thing: it hurt like hell!

Her exertions lessened until she could hardly fight anymore. Her face took on a bluish tint. Kamisol smiled as she approached the dangling 18 year old.

“Let’s see if she’s enjoying herself, shall we?” Then she pulled one leg aside as she reached up with her hand. She rubbed Marzai’s wet crotch before sticking a couple of fingers inside. 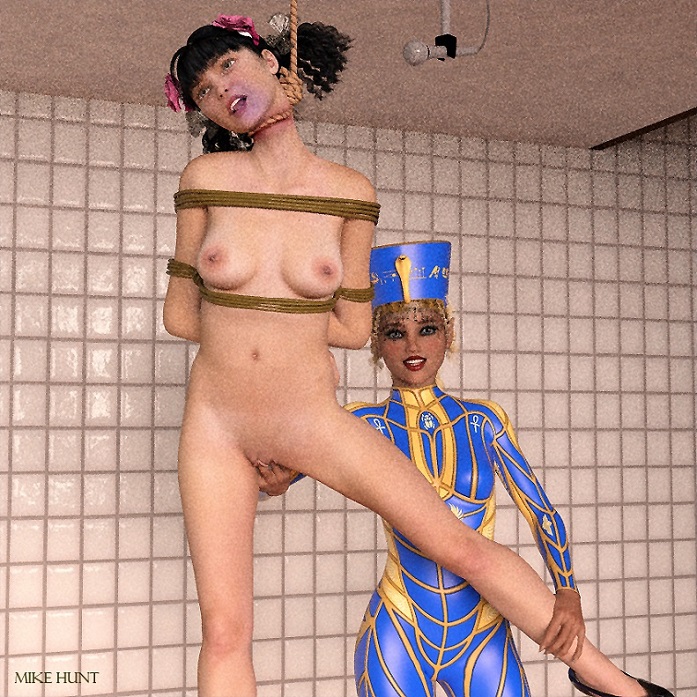 Kamisol finger-fucked poor Marzai as the 18 year old’s chest heaved. But she was unable to get any air down her throat. She shuddered from an orgasm as major organs started shutting down. Then her bladder released.

Kamisol jerked her hand away. “That’ll teach me,” she laughed pleasantly. “They always piss themselves as they’re slipping away.”

She let go of Marzai’s leg and gave her a push. The 18 year old swayed back and forth. Life was fading from her eyes as drool spilled off her protruding tongue and splattered her tits.

There were brief twitches as stray muscles fired. Marzai’s legs flinched as she hitched gently in the noose. Then her bowels gave way with a loud fart.

The spectators roared with laughter and cheers. “Let’s give her a big round of applause, shall we?”

The audience gave Marzai a standing ovation. It looked like the nightclub was going to be a huge success. All they had to do was keep finding a sweet young thing to hang every once in a while.

(Inspired by a story idea and renders courtesy of Mike Hunt, which are included for illustration purposes.)