Luring a French maid (to her hanging)

“It’s the best French maid costume I’ve ever seen!” Dara gushed as they stood in the private room. Sounds of the Halloween party could be heard down the hall in the main room. 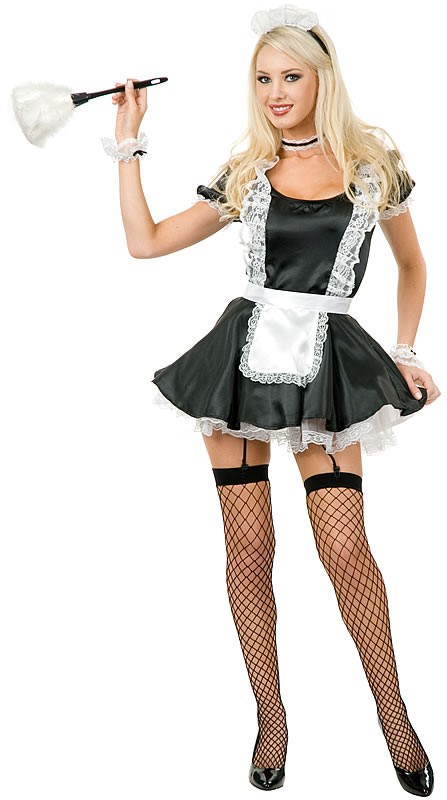 “It is?” Macy asked excitedly, quite pleased her outfit seemed to be a winning costume.

“It sure is, hun!” Treva told her. “You win the grand prize! You get to star in an upcoming scene in our next movie!”

They pointed her in the direction of a noose dangling from the ceiling. A wooden stool lay directly underneath. A camera on a tripod stood nearby.

“Is it an execution scene?” Macy asked.  Or am I the victim of a serial killer?” She actually seemed enthusiastic.

“A serial killer, hun,” Dara told her. “Let’s have you stand in front of the stool so we can get a few stills.”

The French maid willingly took her place in front of the stool. She smiled as she shifted into different poses. Dara went behind the camera and took a few pictures.

Afterwards she motioned at her friend. “Treva, should we get her up on the stool? We could frame the noose around her face.”

“Why should I mind?” the French maid replied, excited she might actually get to play a part in a movie.

Treva helped her up onto the stool, making sure she stayed balanced on her heels. She was positioned so her face was framed by the noose. That’s when Dara got behind the camera and took a few more pictures as Macy posed precariously.

“That’s good,” Dara observed. Then she motioned with her hand as she told her, “Now try to look ‘in character’. Try to look scared.”

The girl in the French maid costume did her best to look alarmed. She nervously eyed the coil before her as several more pictures were taken. “How’s that?” she finally asked after a few moments.

“That’s great. Now put your head in the noose.”

Treva stepped in and helped steady her as Macy looped it around her throat. Then she stepped back out of the shot as Dara took a few more pictures. Macy posed as best she could, trying to maintain her balance while appearing frightened as her arms hung at her sides.

“Something’s not right,” Dara observed as she stepped back from the camera.

“We need the bondage look. Put the cuffs on her. She won’t mind… right, hun?”

“Oh, I don’t mind,” the French maid gushed. “Actually, this is kind of exciting. Do you think I’ll get the part?”

“With that outfit and the way you’re posing for us? I’m sure of it!

Treva cuffed the girl’s arms behind her back. “It’s getting a little hard to balance on this stool,” Macy observed nervously.

Treva snugged the noose tight around Macy’s neck. Dara stepped up to the camera. Then she snapped off a few more pictures. “Looks good,” Treva observed as she stood out of the way.

Macy did her best to continue posing. She was nervous about her balance. Thus, the alarm she presented was quite realistic.

“Almost done,” Dara called out. “We just need a couple more for your portfolio.” Then she smiled knowingly at her companion…

“I’m ready, Treva. Kick the stool out from underneath her, and I’ll take a few more.”

Macy’s eyes flew open in surprise. A moment later the stool was kicked away, skittering across the floor. The noose instantly took her full weight.

She only dropped a couple of inches. But the rope tightened ominously around her throat. It had the effect of nearly cutting off her breath.

She rasped and gurgled as she struggled to get a decent amount of air down her windpipe. Her feet instinctively kicked and pedaled as she fought the noose. “That’s it; make it realistic, hun!” Dara called out enthusiastically as she kept snapping photos.

The girl in the French maid costume frantically jerked her arms up and down behind her back. But it was all in vain as she rasped for breath. Her feet fluttered for solid footing as she choked and gurgled.

The skirt of her outfit fluttered from her fight with the noose. Her struggles lessened considerably as her chest heaved. She could no longer get any air down into her lungs.

She finally became too exhausted to kick anymore. Her body made little twitching motions as stray muscles fired from sporadic nerve impulses. That’s when a stain appeared in her skirt as droplets hit the floor.

“That’s great” Dara gasped as she continued snapping pictures. “Pissing yourself was a nice touch! Keep it up; you’re doing great!”

The French maid hung limp as her body gently twisted and swayed. Treva came up to the strangled girl and placed a couple of fingers against her carotid artery. “Anything?” Dara asked.

“Almost gone” was the reply. “Her heart’s barely beating. Get my picture with her, ok?”

She wrapped an arm around Macy’s waist. A couple more photos were snapped. Then the girls switched places so Dara could have her picture taken with the dangling body.

As a last treat, they set the timer. Then they stood on either side of their gullible victim. The camera took pictures of Dara and Treva standing with Macy’s corpse dangling between them.

“Give her one last swing,” Dara said to her conspiring friend as she walked behind the camera one last time. “I want to get a few more shots of her swaying back and forth.”

The lifeless body was given a gentle push, setting her to twisting and swinging. Her face had turned purple as her neck lengthened considerably. Dara snapped a few more pictures until she was fully satisfied.

“That’s perfect!” she told the corpse with a big smile. “These are just what we were looking for! You did great!”

She walked up to Treva and put an arm around her. “These blondes are so gullible. Let’s go back to the Halloween party and see who else we can pick up. I want to see if we can get one to stick her head in that guillotine down in the basement.”

They packed up their camera and tripod. Then the two conspirators giggled as they walked out of the room. The girl in the French maid costume was simply left to hang quietly, having given the one and only performance the two wicked bitches were looking for.

(Picture found on the net and added for illustration purposes only.)

This entry was posted in Asphyxia Stories. Bookmark the permalink.