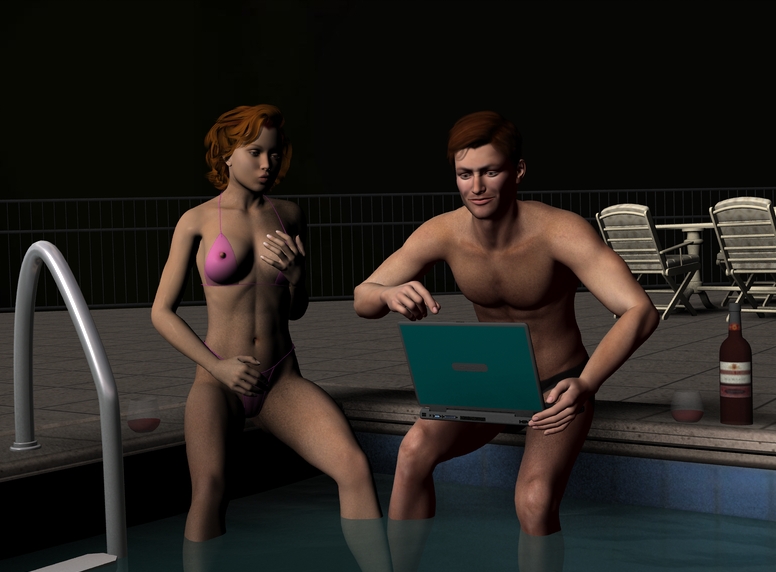 “What’s his next story?”

“This one should be interesting.”

“Some of his characters can do that.”

“What happens to her at the end?”

“She doesn’t quite make it.”

“Are you telling me she drowns?”

“He doesn’t really say. Why? Do you want to know whether she drowns or not?”

“Is she left on the pool floor to drown?”

“So let me get this straight. She’s on the pool bottom using a toy on herself for four minutes?”

“There’s a guy down there that times her.”

“And I suppose you want to be the one who times me, eh?”

“Why? Are you thinking of going down?”

“All his stories are hot.”

“Some more than others.” Now she was cupping her breast, her nipples poking through her skimpy pink top.

“What? You want to act this one out?”

“If I do, do I have to stay down the full four minutes?”

“You have to according to this story.”

“What if I can’t hold my breath long enough?”

“Then I guess you’ll swallow some water down there, won’t you.” He smiles as though he might enjoy seeing that.

“He says one of those pink, ribbed ones… like the one you have that really drives you crazy.”

“Then why are you touching yourself right now?”

She self-consciously stops. “I don’t know. It sounds kind of… I have to use it on myself?”

“The story goes that she pushes it in up at the surface, turns it on and then goes down to the bottom of the pool to hold her breath. The guy goes down and makes sure she stays down until her four minutes are up.”

Five minutes later they are back, sitting on the pool’s edge.

“Ok, it’s inside me. My bottoms are holding it in place. And I’ve got a weight belt around my waist so I don’t float up. Gawd, it’s… it’s really… I don’t know if I can stay down four minutes.”

“You’ll have to if you want to act out this story. I’ve got ankle weights on to help keep me down and stay with you.” Then he checks his watch. “Are you ready?”

She looks at him dubiously. Then she nods her head.

She hyperventilates. Then she slips under, losing a few bubbles on the way down. He checks his watch before following her down.

She stops and hangs onto the bottom rung of the ladder. He shakes his head and points. She has to go all the way down and lie flat on her back.

She shakes her head, losing a couple bubbles out of her nose. He points again. She finally nods as she lets go of the bottom rung of the ladder.

She reaches the bottom and lies flat on her back on the pool floor. He kneels right next to her. She lies there and bubbles, wincing as her sinuses adjust to the sting.

He motions she needs to fuck herself with the toy. She moves her bottoms aside and grabs the end sticking out. Then she starts to thrust it in and out.

There is a quiet, yet distinct buzzing sound. She wriggles a little as she loses a little air. Then she motions she wants to go back up.

He shakes his head before motioning… “Hunh – unh. Now you’re committed.” Then he indicates the time on his watch. She’s been down for 1:30.

She winces as she wriggles a little. She stops fucking herself. So he reaches down, grabs the toy and works it in and out of her.

She winces in agony as she loses a few more bubbles. He didn’t specifically say this was a part of the story. She begins to wonder if he deliberately left a few things out.

The toy continues to buzz. She motions at his watch. He checks it before motioning back her time… 2:20.

She shakes her head and motions for the surface. He shakes his head and smiles. Then he pushes down on her chest while working the buzzing toy in and out of her.

She loses more bubbles. This wasn’t really a part of the story, was it? Did he leave out the part about the guy pushing her down and working the toy inside her? She had no idea he was going to do this to her!

She motions at the watch as more bubbles slip out of her nostrils. He signals back… 3:10. Gawd; she’s not sure she can hold her breath long enough!

The toy is driving her crazy. She wriggles and squirms as she loses more air. Then she shakes her head and motions at the surface.

He grins as he firmly pushes down on her chest. Then he really fucks her with the toy. Her eyes fly open… Surely this wasn’t part of the story, was it??

Her torso begins to shimmy. She loses a burst of air as she shudders hard in orgasm. That’s when her lungs become empty.

Her eyes fly open in horror as she clamps a hand over her mouth. Her chest hitches as she swallows water. Then she begins coughing and convulsing as she grunts and gurgles.

He fucks her harder with the toy as she bucks and shudders and swallows water. The second orgasm that envelops her is incredibly intense. She can feel herself starting to lose consciousness.

He checks his watch before popping her weight belt. Then he scoops her up in his arms. He carries her up to the surface where he manages to heft her up onto the side of the pool.

She spews water out of her mouth. Then she goes into a serious coughing fit. It takes her a couple of minutes before she gets most of the moisture out of her windpipe and can breathe without coughing.

He climbs out of the water and retrieves a couple of towels. They both dry themselves off. Then he picks up the laptop and looks at it.

She gives him a skeptical look. “Don’t tell me all that was in his story, was it?”

“I, uh… I improvised a little.” He grins mischievously.

“That was terrible! I started to drown!”

“But you came twice. You also made it to four minutes.”

“Yes-thanks to me. I’m the one who had to keep you down in order for you to make it.”

She coughs again. Then she sees him studying the laptop. “What is it?”

“He just posted another one.”

“She has to ride a cock at the bottom of the pool for four minutes.”

She looks at him and licks her lips. “Another four minutes?”

“And does she drown again?”

“You’re not telling me whether or not she drowns again?”

He just gives her a knowing look.

She notices the erection in his suit. “Damn! You WANT me to drown, don’t you! Ok – ok; you talked me into it! Besides, it looks like you need a good fuck anyway.”

“I didn’t talk you into anything.”

“Just shut up, fill your lungs, and get ready to fuck me at the bottom of the pool; ok?”

“And keep you down for four minutes or until you drown?”

She winces. Then she spits out, “Yes, damn you!” He just laughs as his cock twitches in his Speedos.

This entry was posted in Drowning Stories and tagged drowning, sex toys. Bookmark the permalink.