The gallows in the courtyard

There was a rap on the door, followed by a familiar voice. “Reilah?”

The maid gasped in alarm. She was not prepared to face Navi, certainly not at this moment.

The door suddenly opened. Reilah saw her mistress standing framed in the doorway. Immediately she clutched the sheet to her neck, hoping to cover her privates…

Reilah had already adjusted to the way her employer referred to her so intimately. “I’m not dressed, Mistress. Please, allow me to…”

There were times when she could not resist that authoritative tone. This was one of those times. She slowly lowered the blanket from her body. Then she climbed out of bed.

She stood before her employer, almost naked. She wore only her black stockings and heels, presents from Mistress Navi. It was amazing how wonderful she felt in them.

“I cannot sleep, my child. I need your assistance. Come with me.”

Reilah could not help herself. She dutifully followed her Mistress as though in a trance. Being shamefully naked did not seem to bother her employer, certainly not at the moment.

Her heels clattered as they moved through the large estate until they descended the steps down into the courtyard outside. It was a warm, humid night. The dark sky was full of stars.

Navi led her maid over to the wooden structure in the center of the courtyard. A thick woven noose dangled from the point of the beam. Reilah inhaled sharply as she looked up at it.

“I cannot sleep, Reilah. I am too worked up. I need you to dance for me.” Then Mistress motioned at the noose.

Reilah watched as it lowered as if by magic. Then she swallowed hard. But she could not disobey.

She carefully walked over to the dangling noose, her heels clattering on stone. Then she reached out and touched it. “Dance for me, Reilah. I need you to dance for me.”

Reilah inhaled with fright as she took the noose into her trembling hands. Then she carefully looped it around her neck. “Now I want you to do for me what you were doing in your room, Reilah. Dance for me, my child.”

Navi motioned with her hand. The noose suddenly retracted upward as though it had a mind of its own. A moment later Reilah was kicking in vain for solid footing.

She rasped for breath as she tried to understand what was happening to her. At the same time she felt unexpected pleasure blossom between her legs. It was the same pleasure she’d felt up in her room a short time ago.

Her legs began to kick as she felt something pulse inside her. She reached down and touched herself. Fingers penetrated as she frantically tried to work that special feeling out of her dripping slit.

Mistress sighed with pleasure. She admired the stockings and heels she had given the young woman upon arrival at her estate. The fabric had sent messages back to her, indicating what the maid had just been doing in bed. Now they sent new messages, exciting messages of what was happening to Reilah’s body.

“Yes, my child. Dance for me.” And Reilah danced as her body came alive.

The rope began to constrict around her throat. And still she danced and masturbated. A part of her was embarrassed she was acting so shamefully in front of her employer. But Mistress seemed to be enjoying it. 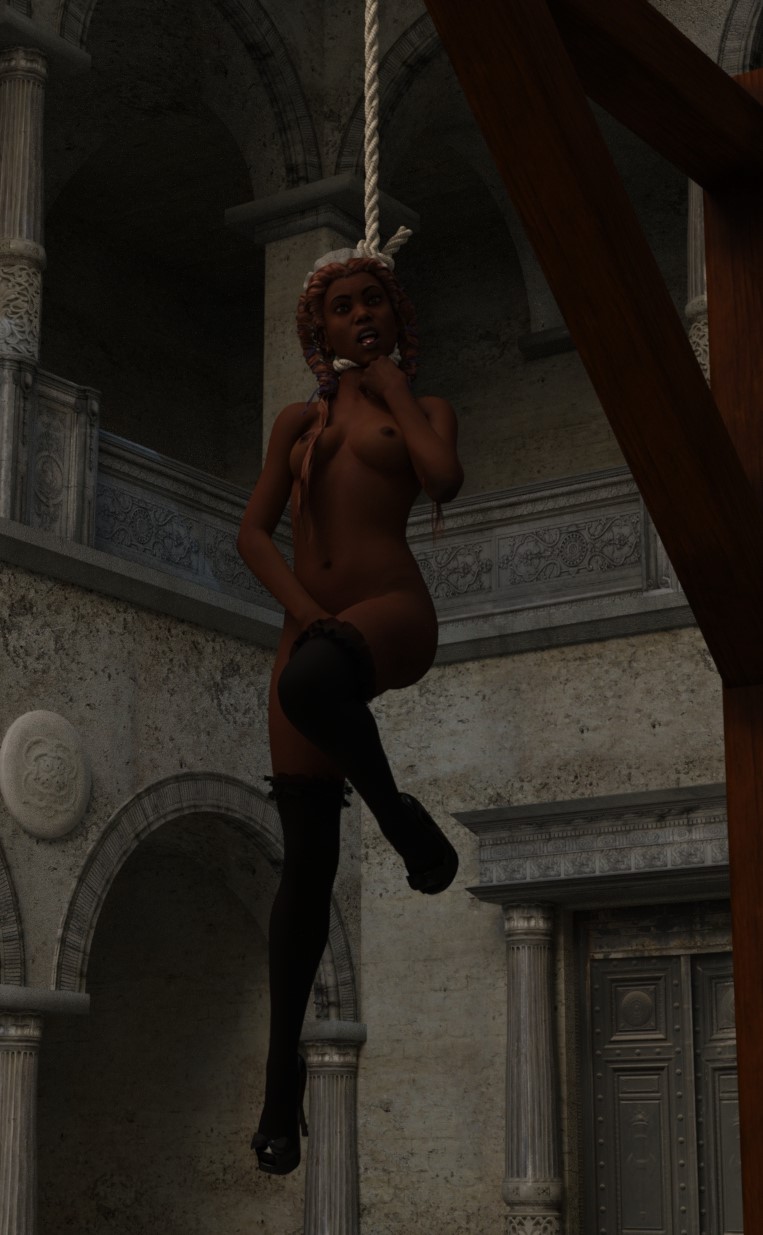 She kicked; she struggled; she danced on air as one hand clawed reflexively at the noose. And still she fingered herself. She could not seem to make herself stop.

Mistress moaned. Her body seemed to give off the faintest of glows. It was a most wonderful dance.

Reilah began to slow down. It was so hard to breathe. She hitched twice and then hung limp as her arms dangled at her side.

“Wonderful, my child,” Navi breathed in rapture. “I believe I shall have another.” And with that she waved her hand in the direction of her dangling maid.

Reilah appeared to awaken with a start. Almost immediately she became aware of her situation, of how she could not breathe adequately. That’s when she stared in disbelief as she grabbed at the noose around her neck.

“Yes, my child; yes.” Navi seemed to be in some sort of euphoria. Reilah kicked and struggled as she danced for her mistress while acting lewdly in the noose.

She fingered herself harder as she wildly kicked about. She hitched and jerked as she rasped for breath. Then it came in a mighty wave, battering her senseless.

She wet herself from her climax and from her bowels releasing. Then she hung limp again. Mistress panted heavily for breath as she watched in reverent awe.

A male suddenly appeared as though from out of nowhere. That’s when the rope lowered Reilah’s body. He caught it in his arms and quickly removed the noose from around the neck.

Navi caught sight of him and smiled. “I’m better now, my child. Take her back to her room.”

“Mother, you know you should not be doing this to her. I see you gave her the stockings and heels.”

“I had to, my child. I knew she would dance divinely for me.”

“Remember the last one, mother? She danced for you for eight months before her heart gave out and she could dance no more.”

“I know, my child. But I cannot help myself. This one was pleasuring herself in her room, and I…”

“I know, Mother; I know. You should not have given her the stockings and heels.”

“I could not resist. She loves and appreciates them so. Now take her back to bed, my child. Let her rest so she will be ready for her duties in the morning.”

“Please, mother; not so often with this one. Otherwise she will not last as long as the last one.” Then he shook his head as he carried her back to her bedroom.

This entry was posted in Asphyxia Stories and tagged hanging. Bookmark the permalink.