A writer sits at his keyboard trying to type the script to his next underwater clip. He’s produced a lot of content and he’s trying to come up with a fresh plot.

Shelly floats topless on an air mattress in the pool. It seems sturdy enough, and she likes how it feels like she is floating. 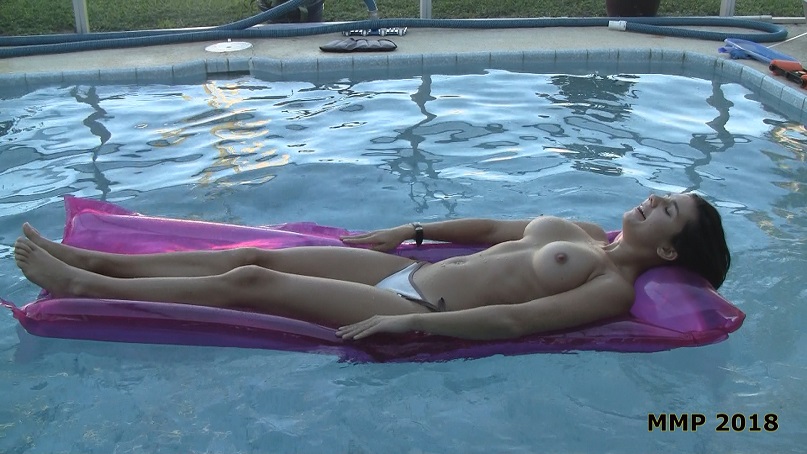 She is half asleep when she hears a noise – a dog, a gunshot or a car backfire. It causes her to rise up with a start and roll off into the water.

The model falls into the water. She starts clawing at the surface, trying to keep her head above water. She keeps gulping, slipping under, coming up, gasping and sputtering, slipping back under. 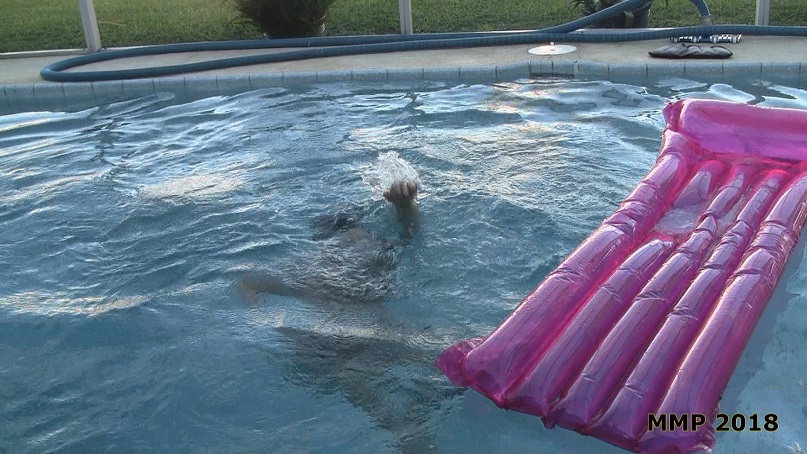 No, I’ve done the “Can’t Swim scenario before. Maybe I should try something else. Let me see. Ok, let’s do this. Shelly treads water in the deep end, enjoying her swim in her bikini.

The model is suddenly at the surface treading water. She calls upward toward the sky… Oh, I can swim now? And I’m wearing my bikini? Great. Shelly swims down along the bottom from one end of the pool to the other, bubbles trickling out of her nose. After a few such swims she stands up in the shallow end.

Shelly sees a large black container at the bottom of the pool. She looks at it and is excited. Her boyfriend must have left her something special.

The model looks up at the sky as though she is talking to this writer. I have a boyfriend? And he left something for me at the bottom of the pool? And I’m supposed to go look? Fine – fine; whatever. The model swims down and checks the container. But it is tied with rope. She will have to get the rope off if she is to get into it. The model struggles with the rope, losing air before she has to swim back up.

Shelly can only hold her breath for a minute. So it will be hard to open the container.

In the shallow end the model looks up at the sky.  A minute? Really? Are you fucking kidding me?

Ok, she can hold her breath two minutes.

Model looks up and nods. That’s much better!

But the cover is nearly closed because it jammed last week. Shelly will have to swim under all the way to the bottom of the pool under the cover.

The model sees the cover is suddenly in place. She looks up again in surprise. You put the cover in my way? Really?? That’s just great! That’s just fucking great!

The model swims down to the container. She fights to pull the rope off. But there seems to be so much of it. 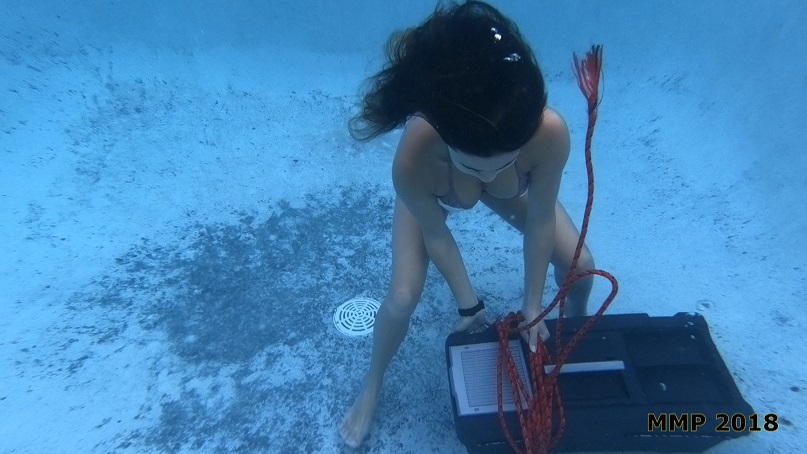 She bubbles and struggles as she strains to get it all off. But a big release of bubbles sends her back to the shallow end to get a breath. The model pops up, looks upward and blurts out, Did you have to use that much rope? How am I supposed to get all that off on one breath? Could I at least have a weight belt? Damnit!

She is now wearing a weight belt to help her stay down.

The model sees she is wearing a weight belt. She looks up and says, Thanks.

Shelly is in her favorite one-piece. She takes another big breath before she goes back down. And she uses the dive mask sitting on the edge of the pool right next to her.

The model suddenly realizes she is wearing her one-piece. And she sees the dive mask sitting there. She looks skyward in frustration. So I’m in my one-piece now? Would you make up your gawddamn mind? Sheesh! At least you gave me a fucking dive mask! 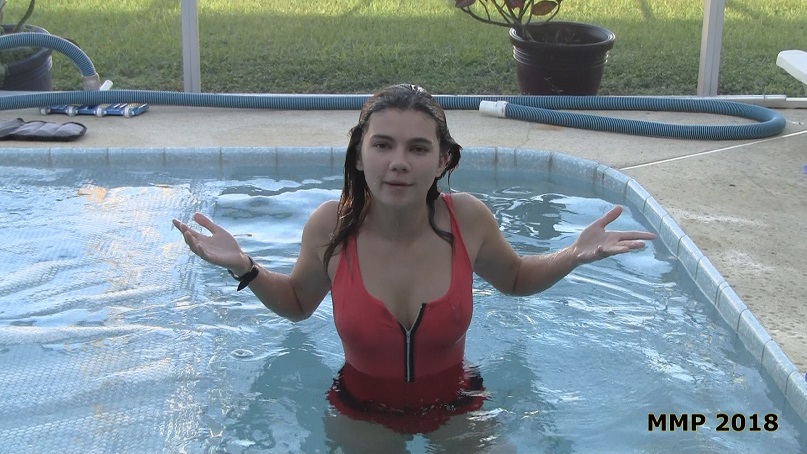 The model puts the dive mask onto her face and swims back down to the container and starts to fight with it. There is so much rope.

Hmm. I don’t think I want her wearing the dive mask after all. Let’s take it off. 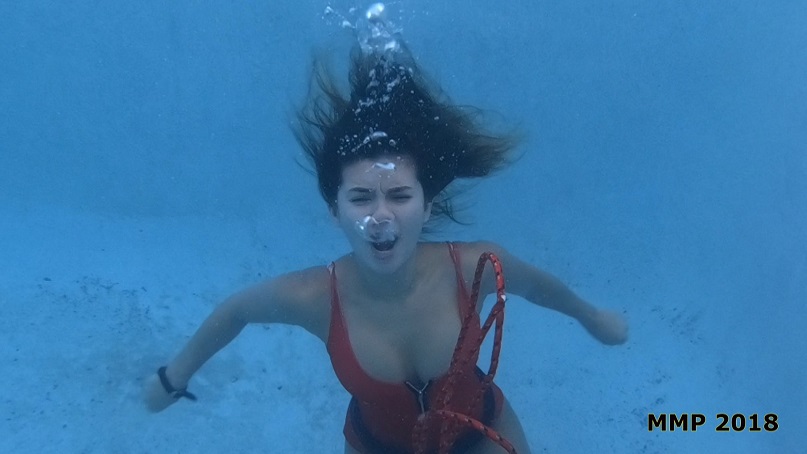 The model is fighting with the rope when the mask suddenly disappears. She touches her face and bubbles, What the hell?? Fuck!! Then she shrugs her shoulders before she goes back to fighting to get the rope off the container.

No, I think I want her back in her bikini for this.

The model becomes aware she is wearing her bikini underwater. She looks at herself in surprise. Then she looks up, gives the writer the finger and bubbles MAKE UP YOUR GAWDDAMN MIND!

But Shelly is running out of breath. And now her ankle is caught in the rope. 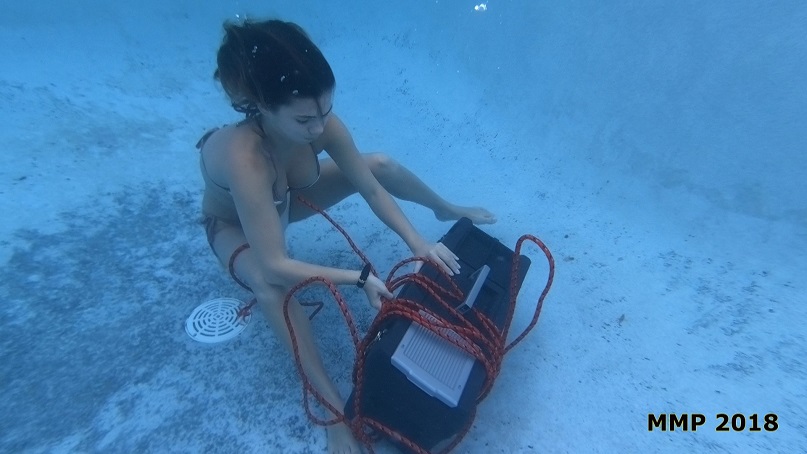 The model looks down and sees her ankle is suddenly snagged. SHIT! SHIT – SHIT – SHIT! She fights with the rope as she loses bubbles, struggling to get it off. Her lungs start heaving as she is running out of breath. This is starting to get serious.

I don’t know. I’ve already done the cover and the container and the rope before. Let’s do something else.

Let’s go back to the mattress floating in the corner as Shelly tries to stay up at the surface. People like that scenario.

The model starts to splash her arms. She looks up in alarm as she gasps, Now I can’t swim? What the fuck?? We’re… going back to that? Shit! Somebody help me!

Fuck this bitch! The boyfriend is pissed off at her behavior and wants to be rid of her. So he handcuffs her to the bottom of the pool ladder. She has a weight belt to keep her down. And she’s topless so he can see her tits. 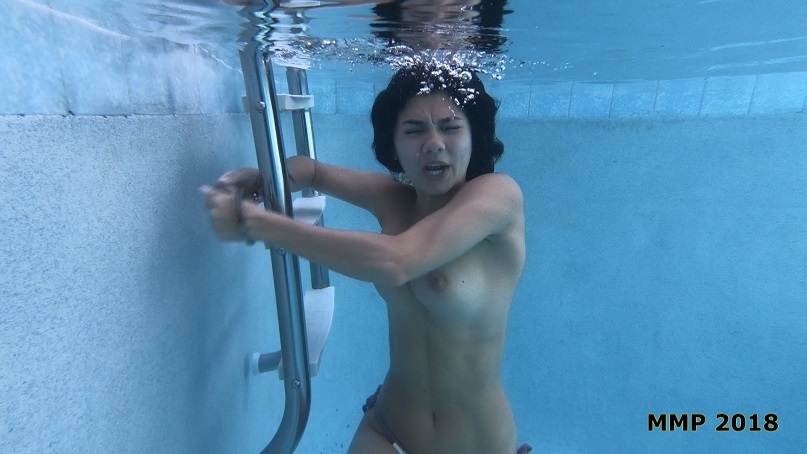 The model is suddenly cuffed to the bottom of the ladder. Her bikini top is gone. She looks up and bubbles, FUCK YOU! FUCK YOU! GET ME OUT OF HERE! She fights and struggles as she runs out of air and drowns, spasming painfully.

The bitch is dead. THE END! Let’s try that and see what happens.

The camera shows the model cuffed to the bottom of the pool ladder, eyes open in shock, the occasional bubble leaking out.

Note: MMPtv actually turned this into a drowning clip. Preview pictures are from MMPtv.

This entry was posted in Drowning Stories and tagged nudity. Bookmark the permalink.