It was nearly pitch black. Molly couldn’t believe how frightened she was… or how terribly excited. What the hell was she thinking??

Her heart beat fast as she tried to peer into the darkness. They could be anywhere in the shadows out there. But she knew she couldn’t stay where she was for long or one of them would find her.

She bolted out from behind the bushes and ran across the hard sand. She panted for breath, her heart beating wildly. She wondered if they could hear her.

A floodlight came on directly in front of her, illuminating the direction she was going. She thought she saw a shadow somewhere beyond the light. She let out a clipped cry as she abruptly changed direction.

The more she thought about it, the more she was having second thoughts. But wasn’t that why she’d agreed to this in the first place? It was the fear mixed with the excitement.

Another floodlight illuminated the ground twenty yards to her right. It looked like someone was over there too! She let out a yelp as she changed direction yet again. Now they’d probably heard her.

A floodlight randomly came on behind her, spurring her forward. She thought she saw someone right in front of her, and she changed her direction yet again. This was fucking crazy!

She bolted to the left and then zigzagged to the right. A floodlight illuminated the ground several yards in front of her. Molly froze with indecision, not knowing which way to go.

A moment later she was bathed in light as a floodlight lit her up. She caught movement out of the corner of her eye. Then she turned just in time to see him taking a swing at her.

It was much too late to duck out of the way. She started to scream, only to have her cry cut off as sharp metal sliced right through her neck. Her body jerked from the sharpness of the blow before her knees gave way.

Blood poured onto the front of her purple shirt as she collapsed onto the sand, her head coming to rest a couple feet away. Her body jerked and hitched as she tried to blink… tried to open her mouth. Then she thought she heard clapping.

A female voice… “Well done. I almost had her until she skittered away.”

A male voice… “I wouldn’t have gotten her if she hadn’t froze in that spotlight.”

Molly heard more voices as well as more clapping… “Well done.”  “I don’t know how you managed it.”  “That was a great swing.”  “Gawd; look at her bleeding out like that.”

Molly didn’t hear anything after that. Her life was over and she’d gotten what she’d paid for. She was unaware her bladder had just released and that her body had wet itself in orgasm.

A male voice… “What do you think, Cheryl?” 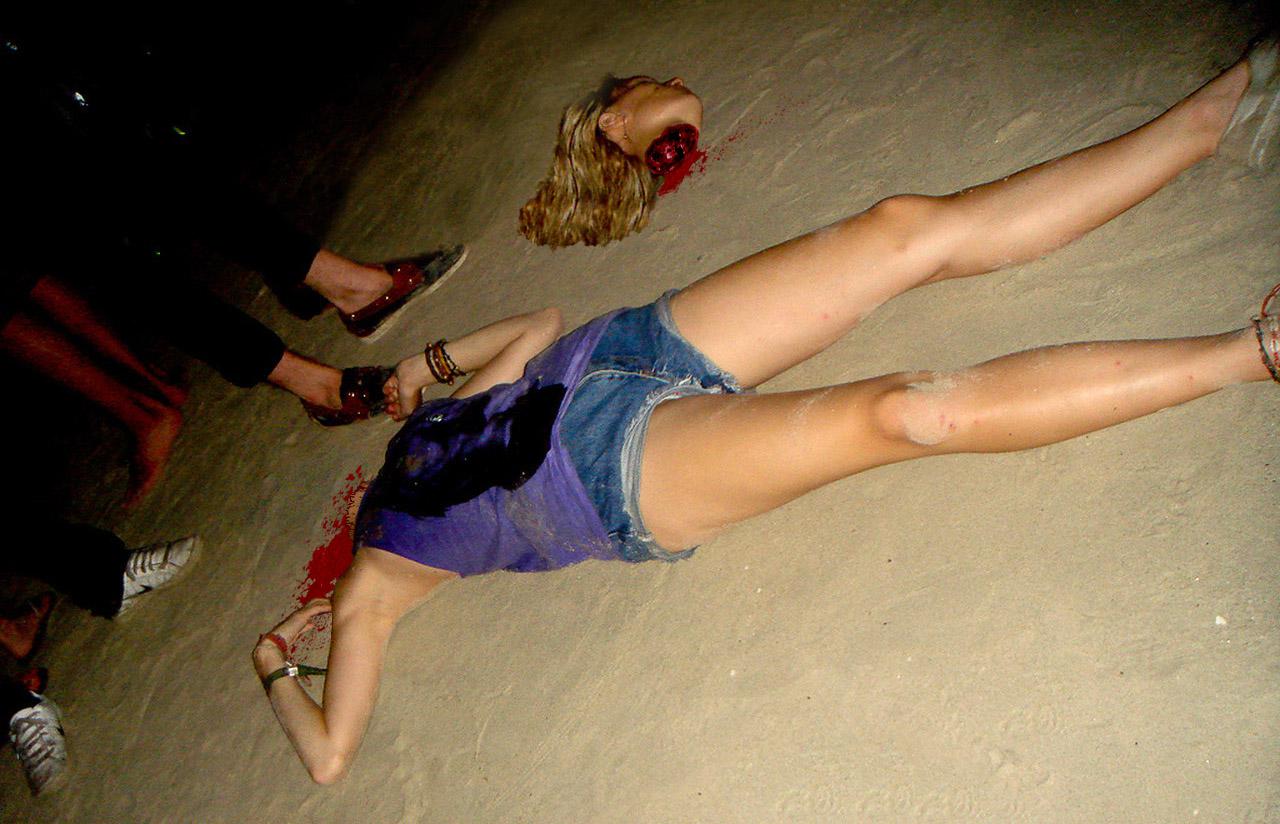 “Damn! That was hotter than I expected it would be!”

“So what do you think? Want to go to the hotel concierge and sign the paperwork? I’m sure everyone here would love another shot at beheading someone out here. Hell of a game, wouldn’t you agree?”

“I, uh… damn. Let’s go back to the hotel. I need a drink. Maybe if you get me drunk enough I might just go through with it…”

“I don’t think I want to do this anymore. I’ve changed my mind.”

“But you promised. On two Entertainment shows you vowed that if you didn’t produce a hit show before this year, you would have your head cut off and presented on Oscar night.”

“But I have a couple more movies coming up!”

“No you don’t. We recently heard they dropped you once they were reminded of your pledge. Remember, your fans are looking forward to this.”

“Oh, that’s not a nice thing to say. I’ll tell you what. We’ll wash that out of the video recording so we can make your last moments here on earth look good, ok?”

She began to hyperventilate as they secured her arms behind her back. A camera in another man’s hands was recording everything. That’s when she began to break out in a cold sweat.

“Into the next room, Miss Henstridge. You’ll be kneeling before a block in there. We have our best executioner handling the axe. Thor has never missed a neck before and he’s not about to miss one now.”

“But you promised. You gave your word.”

“Here comes Thor. You might want to get a shot of this, Anthony. He’s got a nice axe he brought special for your neck, Miss Henstridge.”

“Too bad, Miss Henstridge. They’re the ones who’re demanding your head. You promised them too, if you’ll recall.”

“Fuck the Oscars! Fuck everyone! I don’t want to do this!”

“But think of your fans.”

She was forced onto her knees before an ominous looking block. She was all but hyperventilating at the sight of the red stains. Then Thor brought his axe into her line of sight so she could see what was about to separate her head from the rest of her body.

“NO! Damnit, you can’t do this to me! I’ll do anything!” Then she gasped, “Wait-wait-WAIT” as her head was forced onto the block.

The assistant had to kneel down and help hold her steady. “Give us a moment, would you, Thor?” Then he addressed the frightened actress.

“Look. This is happening one way or the other. They don’t care about anything but your head. Now you saw how big Thor’s axe is. If he misses, he’s not going to miss and potentially damage your skull. He’s going to miss and make a big mess of your shoulders. So I suggest you fucking SETTLE DOWN AND SHUT UP!”

She gasped and whimpered as her head was forced down onto the block once more. Then she pleaded, “Please! I’ll do anything! I’ll fuck you all! I’ll suck your cocks! Please!”

“Do you really mean that?”

“I don’t believe you. You’re scared and you’ll say anything. Now quiet down, lay your head on that block, take a deep breath, and then try to convince me that’s exactly what you’re willing to do.”

She paused for a moment as she tried to rest her head on the block. Then in the calmest voice she could muster she said, “If you let me go I prom-AWCK!”

Her eyes flew open the moment the blade came down, slicing right through her neck. Her head literally leapt off the block and bounced on the floor a couple times. Then Thor reached down and picked up her head by a handful of hair. 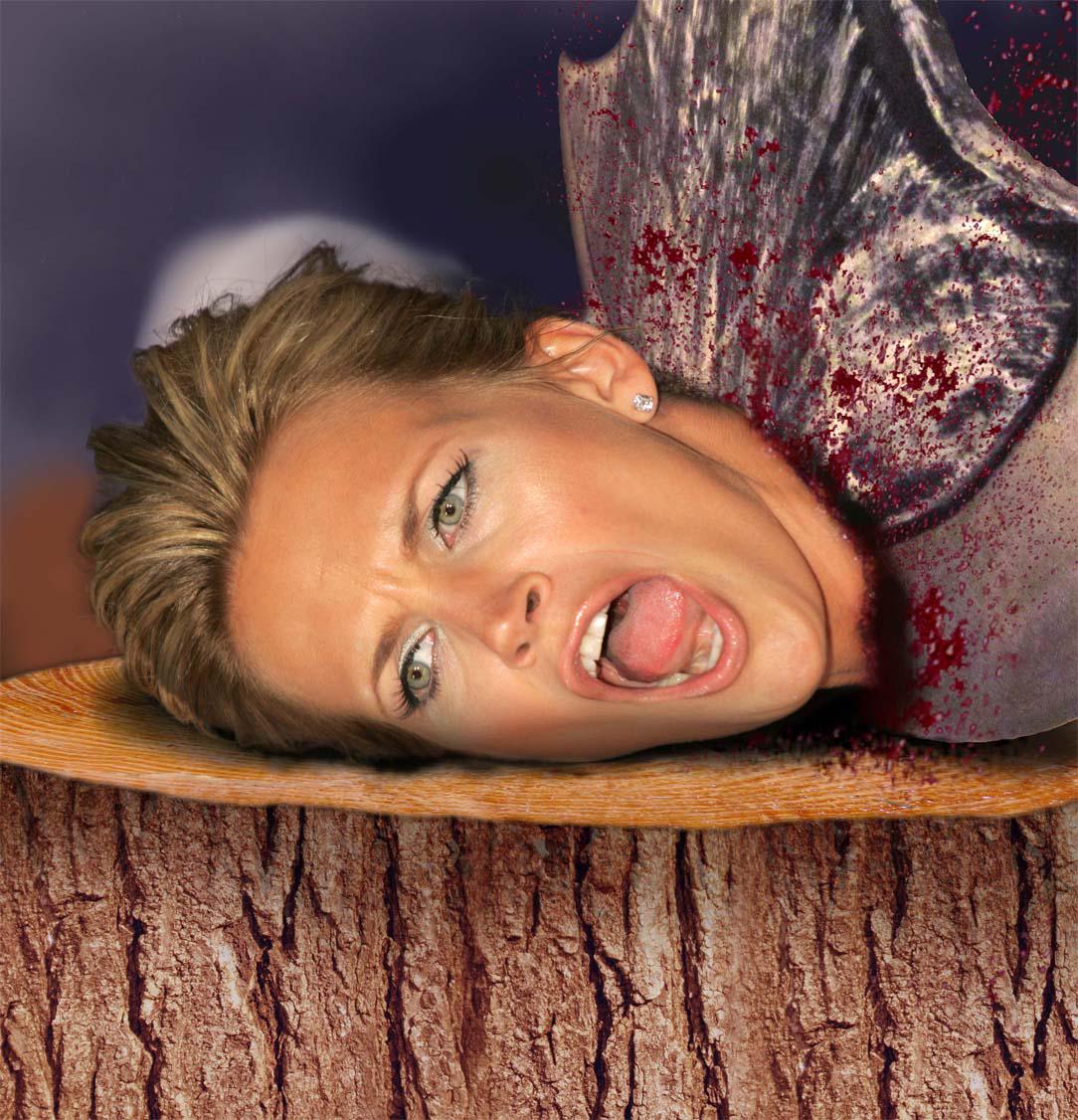 Natasha had a look of shock on her face, her last words frozen to her lips. Her eyes blinked in horror as she was lifted up and turned to see the rest of her body had keeled over sideways and was now jerking and spasming. Blood pumped copiously out of her severed neck.

She tried to speak but no words would come. She couldn’t believe it! They’d actually done it; she couldn’t feel a thing below her neck!

The assistant walked up to her head dangling from Thor’s grasp and smiled. “Miss Henstridge, I do believe my crew and I will take you up on your offer. I hope you don’t mind if we do it post mortem.”

He unzipped his fly and pulled out an erect dick. There was nothing she could do as he grabbed her head and forced it between her lips. Her last taste was his cock in her mouth before her vision faded, her expression sagging tiredly.

This entry was posted in Beheading Stories and tagged beheading, pictures. Bookmark the permalink.