Allow me to upload one more story to get caught up. I’m feeling better.

It took me a few weeks to cultivate a friendship with Suzan Rose. Soon we were having coffee twice a week. From there it was only a matter of feeling her out enough to make her curious.

I let slip I had a bit of a hanging fetish just to gauge her reaction. Instead of frightening her off, she acted curious. I told her bits and pieces, just enough to gain her interest.

One day during coffee at my home I showed her pictures of models I found who had posed with a noose around their neck. She seemed to become even more interested. So I went and showed her a noose I had on the premises.

Again I half expected her to change the subject. Instead she playfully put it around her neck. Then she asked me how she looked. “Incredible,” I panted as I became moist down below.

I put the noose away and dropped the subject. Turns out she was the one who brought it back up at our next coffee. She admitted she’d kind of enjoyed feeling the noose around her neck. Then she asked if there was some place where she could pose like one of those models.

I fetched the noose and tied it off to the second floor banister of my 2 story home. Suzan stood at the bottom of the stairs where she put it on and modeled it for me. When I asked if I could take a few pictures she said yes.

Afterward taking the pictures I put the noose away and changed the subject. I didn’t want to be too aggressive with what I was thinking. But at the end of our coffee she told me she’d had a good time and wouldn’t mind modeling my noose again. That’s when I knew I had her hooked.

During our next coffee at my home she asked if she could model the noose again. She told me she was wearing lingerie and wanted to see how the pictures would turn out. So I set up the noose in the stairwell again.

Afterwards I asked her how she’d felt with the noose around her neck. “Incredible!” she gasped. “You have no idea what it does to me.”

I told her how I’d felt seeing her in the noose while I’d taken the pictures. I thought that might sour her a bit on the experience. To the contrary she told me she thought I looked like I was enjoying myself and that it had been quite a turn-on seeing my expression.

I ended our noose discussion on that note. I wanted to keep her coming back for more. And I didn’t want her to suspect what I was up to.

The next week she came over wearing a sexy outfit. She admitted she was thinking of the noose again. That’s when I made my move.

I led her into the sun room where we discussed taking more noose pictures. Then she looked outside and saw my backyard. I had a metal frame all set up out there.

“Oh, I was thinking of hiring a few models to try out the noose out there.”

“Please? Just this once?”

I got up and went to go fetch the noose. When I returned I saw she’s stripped down to her nylons. She smiled as she asked, “You don’t mind, do you?”

“Not as long as I can strip down to mine,” I replied with a smile.

I got undressed. Then I took a little footstool and we went out back. The privacy fence was high enough that no one could see us.

I set up the noose and the stool. Then I asked her, “How do you want to pose?”

“Let’s make it look real!” she gasped. I could tell by the way her nipples stood out how much she really wanted to be noosed for me.

I looped the rope around her neck and took a few pictures. But she wanted more. She even begged me to tie her arms behind her back.

I tied her up and took a couple more pictures. Then she asked if I could tighten the noose. I smiled as I went over and took all the slack out. Then I secured it to the cleat attached to the metal frame.

“Like it?” I asked. She moaned and nodded in reply. I rubbed her breasts, taking advantage of the situation. She just writhed and groaned.

I took a few more pictures. She looked sexy as hell standing there. Then I asked her if she wanted me to strap her legs and ankles together for another photo or two. She eagerly nodded her head. Damn, she was making this easy!

I ran a strap around her upper thighs. Then I strapped her ankles together. Her nipples looked painfully erect, and her pussy was moist. 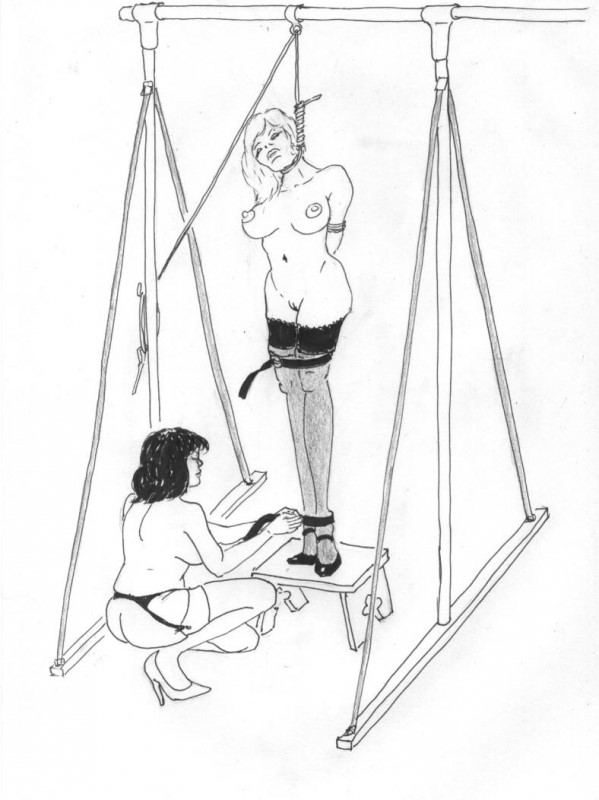 “Damn, you look sexy!” I panted as I fingered her dripping slit. Does this turn you on?” She nodded and moaned.

“Well it sure as hell turns me on!” I replied as I snapped several more pictures.

I walked up to her and fingered her slit again, taking advantage of her helplessness. She clenched and moaned. Then she asked, “Would it be possible? I mean… would it be safe if I… if I hanged… only for a second or two?”

“Up to you,” I replied. “You can lift your feet off the stool if you like. Want me to take a few pictures?” She eagerly nodded.

I was wet as hell as I picked up the camera and focused in. Then she lifted her feet up off the stool, bending her legs at the knees. I snapped off several photos as she did that for a good twenty seconds before she found the stool with her heels.

“You were airborne for a good twenty seconds. Of course your knees were bent. Too bad I can’t get a picture of your legs going straight down looking for the stool.”

“Can we do that?” Suzan panted breathlessly. “I mean… it wasn’t THAT bad. How long was I in the air?”

“About twenty seconds. We might need thirty or more for me to pull the stool, take a few pictures and then put the stool back.”

“How are the pictures turning out so far?”

“Fantastic. Of course you’ll get a set of them once I’m ready.”

“Remove the stool and take a few pictures.”

“Are you sure?” She just nodded excitedly in reply.

“Ok, if you say so. When you’re ready just lift your feet and I’ll pull the stool out of the picture. Then I’ll take a few photos before putting it back.”

She nodded before lifting her feet right away, catching me by surprise. “Oh shit!” and I pulled the stool away. Then I rushed to get the camera as she hung limp.

I snapped off several pictures until she started to kick a little. She looked like a fish dangling at the end of a line. I put the camera back down and then rushed the stool back into place.

She fumbled with her feet until she found it. I helped steady her. Then I tried to work the noose until she seemed to be breathing better.

“Not bad; not bad at all.” Then I removed the strap from around her ankles. I removed the one from her upper thighs before tossing them both aside.

“I guess we’re done here,” I told her. We weren’t really done. But I wanted to carry on the charade just to see how she would react.

“How else do you want to pose, Suzan?”

“How about… without my heels… and kicking with my legs?”

“Those would make for some great pictures, Suzan. But damn. Are you sure you want to go that far?”

“Well in that case I think I can take some good ones for you.”

She clenched as she writhed and moaned. I fingered her harder as I hungrily sucked on a nipple. Then I reached down and pulled the stool out from underneath her.

She really started to kick up a storm. I took a few more pictures and then stopped to watch the show. Suzan looked incredible as she struggled in the noose.

She rasped and gurgled before I heard the word, “Down… get… down!” I just smiled as I took a few more pictures. Then I told her, “Damn, baby; you look so fucking sexy!”

I walked all around as she twisted and gyrated. Her face began to turn red as I marveled at her performance. She hitched and jerked, her thighs rubbing together until she squirted again. 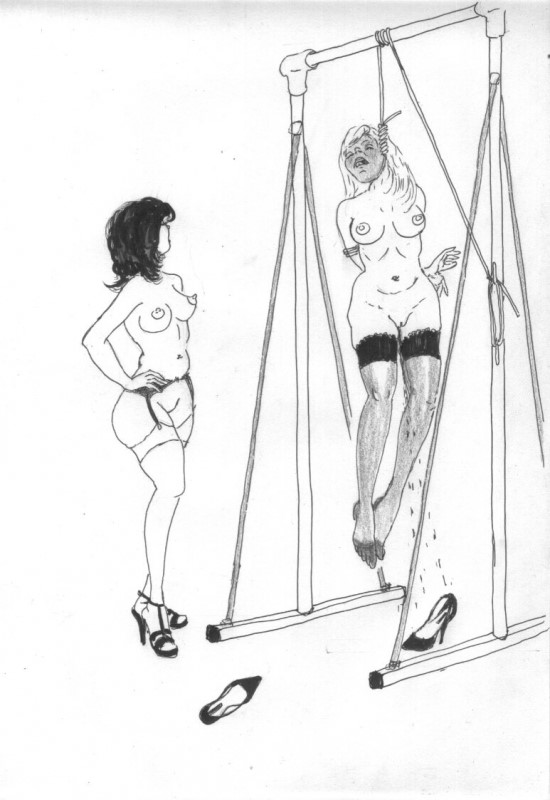 I went and fetched the camera to take a few more pictures. Then I put it down as she hung limp. I went up to her and fingered her cunt while massaging one of her breasts.

Her body twitched and quivered a little. It felt like she was trying to squeeze my fingers. It was time to let her in on the gag.

“I’ve always wanted to hang you, Suzan. I’m just amazed how easy you made it for me.”

She didn’t say a word as her tongue poked out a little between her lips. Then she started hitching as stray muscles began to fire. A moment later her bladder gave way.

Urine trickled down her nylons. Then she hung limp, her body gently swaying and twisting a little. I panted for breath as I fingered myself to orgasm.

Afterwards I walked up to her and felt her up. I groped and fondled her breasts as I fingered her cunt. The sexy bitch had put on one hell of a show.

I stood there and admired her for a good ten to fifteen minutes. Then I went inside and made a call. “Avery? You remember the last time I called with a body for you to dispose of? Well, I’ve got another one. Come on over and take her away. I don’t care what you do with her. I know you have necro fantasies; just don’t tell me about em. …what? Ok, I’ll see you in ten minutes.”

This entry was posted in Asphyxia Stories and tagged female sex, hanging, topless. Bookmark the permalink.