I’m back after a stay at the hospital. More information to follow in my Patreon update. Meanwhile, it’s time to upload.

Strange. It’s been sunny all morning. Then she hears more thunder.

There’s a loud crash, followed by the sound of splintering wood. She’s thrown to the floor, stunned and confused. She hears the harried sounds of crewmembers scrambling on wooden decking above her.

There are cries of alarm. She hears it again. Now she knows it’s not thunder.

There’s another thunderous roar, much closer this time. A cannonball crashes against wood. The ship shudders.

She’s thrown off her feet as the room shakes around her. It’s time to get out of the galley.

There’s a surge of panic. She has to leave before the next cannonball penetrates the hull and snuffs out her life. But where should she go??

She flees in terror, dashing for the main deck. As she climbs the steps, she hears the sound of battle above her. She detects the metal clang of sword on sword, as well as the sound of pistol fire.

She abruptly changes her mind. It doesn’t sound safe up there. It might be better to stay below.

There’s another roar of cannon fire. Wood crashes and splinters below and behind her. The galley is all but destroyed, making up her mind. Surely it’s got to be safer up on deck.

She struggles up the last few steps. The ship develops a slight list to starboard. She throws open the door…

…and steps out into hell…

A battle rages. There are swords, knives and pistols. She sees men dying before her very eyes.

She takes it in with a glance. They’re being attacked by pirates. So where’s the captain?

She looks around in desperation. Where is he? Then she spots him.

He’s close by, clashing swords with a couple of murderous buccaneers. There’s blood on his shirt and a cut on his arm. She cries out in terror…

He glances toward her. “I said get below – garhhhhh…”

The distraction is enough. A sword runs him through. It enters his stomach and exits his lower back.

She screams in horror as the sword is savagely pulled out. The captain drops his weapon and grabs the wound in his stomach. Then he falls to his knees and pitches face first onto the deck.

Her voice fails her. She shakes her head in disbelief as her mouth forms the word ‘no’. Then she hears a gruff voice declare, “Look what we ‘ave ‘ere!”

The two pirates who had been fighting the captain grab her. They push her back against a wall. “Let’s ‘ave ‘er!” says the one.

She finds her voice and screams. The other pirate clamps a hand over her mouth, silencing her voice. “We’ll ‘ave none of that, wench!”

Her eyes widen in terror. The two pirates block some of her view. But she can still see men falling by the sword, the knife and the pistol… men she had just fed breakfast to earlier that morning.

She sees a pistol shot drop the first mate. He was the one who had been the most considerate to her on the ship. She wants to scream, but the hand clamped over her mouth prevents her.

It doesn’t prevent the tears from flowing down her face.

She turns to look and feels a surge of relief. It’s the pirate captain. Maybe they won’t get to have their way with her after all.

It’s a lie, of course. And he knows his captain knows it’s a lie. But for now it’s sufficient.

The captain of the pirate ship looks at her longingly. He hasn’t had a nice looking wench like this one in a long time. He feels a stirring in his loins. She’ll do nicely.

A man comes up to him, breathing heavily. “Cargo’s almost out of the ‘old, Cap’n. Ships goin’ down, though.”

He stares at his prize with the short golden hair, barely hearing the report. “How many killed?” he barks as he continues to stare lustfully at her.

The answer doesn’t really matter. Casualties are a part of plundering. He’ll pick up new crewmembers at their next port-of-call…

This gets the captain’s attention. He turns to the man. “No one?” he repeats with disbelief in his eyes. “Did ‘er crew not put up a fight?”

“Bloody ‘ell!” he says in amazement. Then he barks, “Finish with the cargo.”

“Almost done, Cap’n.” Then the pirate hustles away.

The captain dwells on the casualty report with growing interest.  No one was killed? How could this be??

It is indeed miraculous. Neptune has granted his favor to them all. This day will raise his reputation mightily among the men.

He now looks at the trembling wench in front of him with suspicion. Is she also a gift from the gods? Or is she a test?

Has she been presented to him as a reward? Or is he supposed to give her back in humble gratitude? Now he’s not so sure.

She trembles before him, knowing what he might do to her. Will she be ravished? Will she be run through with his sword?

The captain is uncertain. What will happen if her takes her and has his way with her? Might the gods become angry? Might they take away his stature among the men?

The life of a pirate is fleeting at best. One moment, you’re living well off the plunder of some schooner. The next, you’re dying on the deck of a vessel, run through by the sword of some bloody Englishman.

He’s too superstitious to take the chance…

The captain turns back to the golden haired wench. He sighs heavily. “Sorry, lass. It’s not meant to be.”

He speaks to the two still holding on to her. “Bring ‘er up to the ship’s wheel. And get those bloody clothes off ‘er.”

He scowls as he walks away. It’s a bloody nuisance keeping the gods happy. But one would be wise not to antagonize them.

Her eyes open wide as she shakes her head with fear. What’s going to happen to her??

A pirate grabs her makeshift dress up around her neck. He rips it straight down the center. It exposes her soft white skin, her smooth breasts and hairy crotch. She shivers as he eyes her lustfully.

As the only woman on the ship, there was no time or place for the dignities of undergarments. Now she wishes there had been. But in this instance, they would undoubtedly have done her no good.

They half drag, half carry her along the deck toward the ship’s wheel. Her nakedness is exposed to the gawking eyes of the crew gathered along the side of the pirate vessel. Whistles and catcalls follow her to the wheel.

They quickly discover she’s not to be brought aboard their ship. The catcalls die off as unhappy murmurs set in. Is the captain going to have her all to himself right before their very eyes? There’s a mixture of excitement, anger and disappointment.

The captain waits at the wheel as they bring the squirming girl up the steps to him. They need to work fast. The ship is starting to settle.

She struggles helplessly against them. They tie her off with leather straps. Now she understands what they’re going to do to her.

They’re securing her to the wheel. But the ship is sinking! This will take her down with it.

Should she die? Or should she be brutalized by a shipload of pirates? Only one option promises an extension of life, if only for a short time.

“No!” she blurts out in growing panic. “Take me with you!”

The captain is pleased at her fear. The gods like their victims to be afraid. This is the right thing to do.

The ship shudders beneath them. It takes on a greater list. It groans as the sea hungrily chews it up.

The captain looks upon her one last time. He shows no sympathy or compassion. “Time to go, boys.”

“Wait! I can cook! I’ll do anything you ask! Don’t leave me here!” Her pleas fall on deaf ears.

The captain walks to the edge of the doomed ship. He grabs a rope before calling over to the crew of his ship, just a short swing away. “We’re giving her to Neptune, boys… to celebrate our great victory.”

A cheer goes up from the assembled band of murderers and cutthroats. It would be unwise not to cheer. The damsel can now confirm her cruel fate.

“I’ll do anything you want! I’ll please you; I’ll give myself freely to you! PLEASE!”

The captain pauses, feeling his loins quiver once more. “Bloody ‘ell,” he murmurs forlornly. Then he and his two remaining crewmates swing over, abandoning the sinking vessel.

“NOO! DON’T LEAVE ME!” She hears laughter in reply.

Sails are unfurled. The pirate ship moves off. It does not want to be caught in the suction of the sinking vessel.

She struggles against the leather straps that bind her tightly to the ship’s wheel. But she can’t get free. Then the vessel lurches beneath her.

She lets out a sharp cry of fear as the water level reaches the deck. It starts to swirl under her suspended feet. The ship rights itself and then begins to settle down by the stern.

She whimpers as the water rises. She lets out a cry as cool water touches her feet. Hyperventilation sets in.

The sea rises rapidly up her legs. It hits her pussy, causing her to inhale sharply. It’s going down faster now.

The cool water has a sensuous feel as it caresses and envelops her. It climbs past her navel up her stomach. She feels a terrible thrill of sexual excitement ripple through her.

The cool water hits her breasts, causing her nipples to harden. She gasps in disbelief. Is this how she’s truly going to die??

The ship picks up speed as it sinks. She trembles as she looks up, her eyes wide with fright. Her mouth opens in a scream as water climbs up her shoulders to her neck. 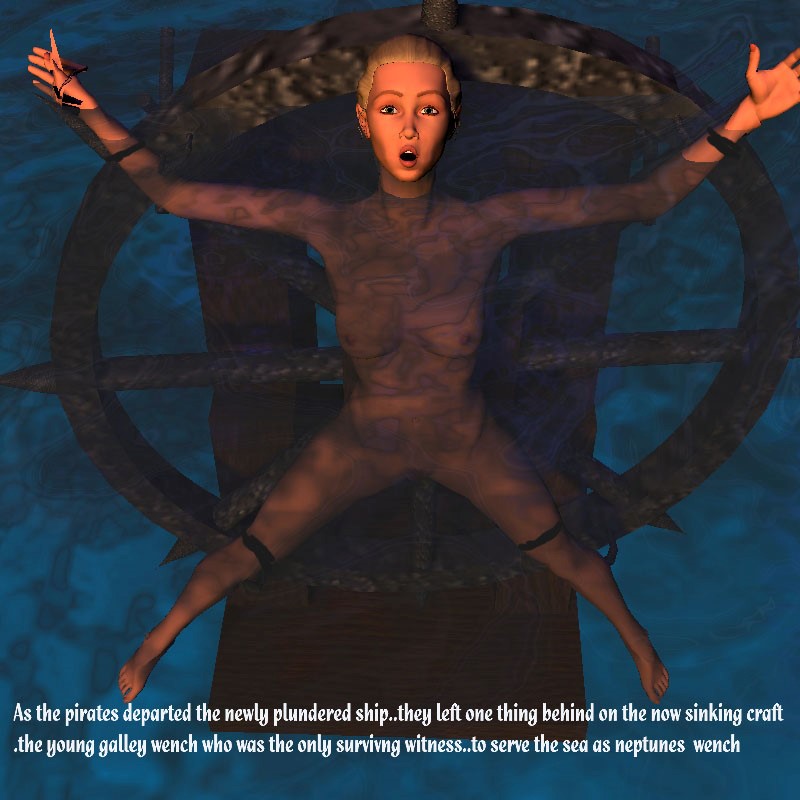 She inhales deeply. Water flows over her mouth… nose… eyes… head. Bubbles spew out of her nose as the ship sinks quickly.

She struggles to hold her breath, her lungs straining until it comes to rest on the sandy bottom. It’s ironic. The cove offered no protection from pirates. Now she will remain here for all eternity.

She feels the pressure on her chest at this depth. Air bursts out of her mouth. She panics as she strains against the straps, struggling to free herself.

More air spews out past her lips. Reflexively, she inhales. Then she coughs and gags.

Her body convulses and spasms as it is invaded by the liquid intruder. She shakes her head back and forth, spewing air. Her body hitches and shudders violently as she looks up toward the surface and the air she will never breathe again.

She gulps down more water as agony overtakes her. She is conscious for far too long. Then consciousness mercifully ebbs away.

Her head remains tilted upward, lifeless eyes open in terror. Small bubbles trickle freely out of her open mouth. Then her bladder empties. A moment later a white creamy substance trickles out of her pussy.

She is now ready to serve Neptune the moment he arrives…

(Inspired by the picture which I included for illustration purposes.)