Note: Every now and then I try to do one of these for the guys and for the ladies who like to read them.

In Stuttgart Germany, six members of the men’s underwater hockey club gain special access to a large indoor pool. They head to the locker room to change. When they emerge, they are all sporting Speedos, goggles and swimcaps.

They take all their hockey gear with them to the deep end of the pool. It is approximately three meters in depth. An underwater goal is set up on the pool floor along one wall.

The water feels great when they all jump in. It is cool enough so they will not overheat from their exertions. But it does cause several cocks to stir. Being in the water does that to many of them. It’s one reason why they enjoy playing underwater hockey.

They start their practice by swimming laps back and forth across the deep end. As usual, Oskar is the best surface swimmer. With black speedos, goggles and swimcap, he is very competitive. He is also the strongest and most muscular of the group.

Afterwards, it is down to the bottom of the pool. Now the team members all swim laps back and forth across the pool floor. They continue until they cannot hold their breath any longer and are forced to surface.

Hans in his red Speedos and swimcap proves to be better at holding his breath while swimming the longest. He is less of a sprinter, but more of an endurance swimmer. The other members tend to burn up their oxygen quicker, often leaving him the last one on the bottom of the pool.

Hans is granted a reward for staying down the longest. He picks Franz in the maroon Speedos who will swim down with him. Hans likes Franz the most when it comes to receiving “rewards”.

Afterwards, the members split up into two teams. Dieter, Stefan and Hans will play against Bernd, Oskar and Franz. The puck is dropped, and the six teammates go at it.

Oskar scores the first goal by brute strength. But Dieter in the green Speedos scores the second. The practice game is now tied.

Masculine pride soon becomes evident. All six teammates go hard at it. But it’s Hans that scores the winning goal, being able to stay down the longest as the others are forced to surface, get a breath and then come back down.

From there, it’s a fifteen minute soak in one of the hot tubs. Then it’s back to the pool for more practice. Once again, the water is cool enough to cause six cocks to stir in their Speedos.

This time the teammates pair off. They work on staying down on the pool floor for as long as they can hold their breath while passing a puck back and forth to each other. The pair that can stay down the longest gets a special prize.

Bernd in his blue Speedos chooses Hans. Stefan, who likes to wear white speedos to show off his long, fleshy bulge, chooses Oskar. Stefan likes gagging Oskar with his long, thick dick. But there’s no doubt Oskar likes it too.

Bernd and Stefan head to the bottom of the pool where they pull off their Speedos. Hans and Oskar swim down to reward the winning puck-passing breath-hold duo. Stefan gags Oskar, but Bernd cannot resist locking with Hans in a 69. Dieter and Franz simply strip off their Speedos and go under to hold their breath and watch while jerking their cocks.

It proves to be another long, breath-holding challenge. Hans and Oskar work hard at trying to get off Bernd and Stefan. The losers have to get off the winners, even if there is a risk of being drowned and revived. The guys love doing that to each other.

Bernd and Hans are talented cocksuckers. The duo in the 69 manage to get each other off in about three minutes. Leaking cream out of their mouths, they happily head for the surface.

Once again it’s back to the hot tub for a soak and a fifteen minute break. Then it’s back into the water for some horseplay breath-holding. The Speedos quickly come off.

There is a lot of grabbing and groping. Cocks are sucked and asses are humped. It gets the guys all worked up again.

Once more they break up into two teams of three. Oskar wants a rematch from the first game they lost. Everyone is agreeable. This time there will be greater rewards for the winners.

The game is stretched to a best-out-of-five. But the two teams are evenly matched. The game ends up being tied at 2-2, with all six of them feeling straining lungs and noticeable erections.

They take a two minute break before they play the final point. It’s Bernd taking a pass from Franz who slams home the winning goal. To the victors go the spoils.

This time Oskar gets to turn the tables on Stefan. He makes his teammate suck him first. Then he grabs his legs, pulls them apart and fucks him at the bottom of the pool.

Stefan excitedly jerks his long, thick erection. He doesn’t mind getting fucked on the pool floor. He just hopes he can hold his breath long enough. 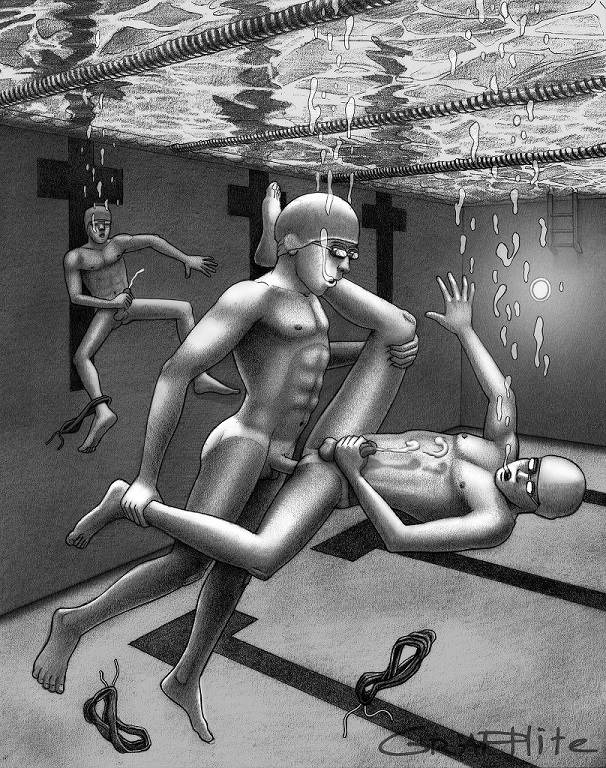 Now it’s Bernd’s turn. He wants to fuck Hans. But he knows he can’t hold his breath as long as his teammate.

Hans grabs a pair of ankle weights. He submerges to suck Bernd underwater into full hardness. Then he fills his lungs and sinks to the bottom.

Bernd pauses long enough to give Hans a head start at breath-holding. Then he dives down and stands behind his teammate. He grabs him from behind and bends him over face down. That’s when he drives his cock deep up his teammate’s ass.

Hans finally shoots ropes of cream into the pool. Then he tries to break free and head back to the surface. But his teammates come down to hold onto his arms, forcing him to stay down until Bernd receives his winnings.

He gurgles as he starts sucking water. He spasms and convulses as his ass massages Bernd’s cock. Bernd finally shoots a load deep up his rectum.

Afterwards, the team hauls a drowned Hans to the surface. He is revived where he shows no ill effects. Next time he vows to drown Bernd the first chance he gets.

For his reward, Franz wants to drown Dieter. The team has a pair of handcuffs at the ready for just such an occasion. So they handcuff Dieter’s wrists to the end of a long, metal pole.

Oskar operates the pole up at the surface, forcing Dieter all the way to the bottom of the pool. Franz waits until Dieter has been down for at least a minute. Then he swims down and moves behind his cuffed teammate.

He thrusts his cock hard up Dieter’s ass. Stefan takes advantage of the situation by sticking his erect dick into a helpless Dieter’s mouth. Bernd comes over and sucks Dieter’s stiff erection.

His chest heaves until he is in pure agony. Then his lungs give out. Dieter’s cock spurts into Bernd’s hungering mouth.

Stefan fucks Dieter’s throat as the teammate coughs and gurgles. A drowning Dieter gets a load of cream pumped between his lips. He’s barely conscious when he feels Franz shoot a load of spunk deep up his ass from behind.

Oskar slowly pulls Dieter up by the pole where they all help to get him out of the water. They check to make sure he is all right, seeing that his breathing returns to normal. Then Oskar and Hans dive down and fetch the goals and all the Speedos

It’s back to the hot tub for one last relaxing soak. But the guys cannot resist reaching around to grab the nearest cock. Soon the hot tub is boiling over with the heat of male sexual lust.

Hans takes advantage of the situation by fucking Bernd as payback. The cuffs are retrieved and Bernd is forced to wear them. Hans gives him a good, hard fuck in the hot tub, bending him over at the waist, forcing his head underwater and making him grunt and bubble.

Dieter gets the same idea with Franz. Together he and Hans fuck Franz and Bernd in the hot tub. The two vengeful teammates make their friends hold their breath for long, agonizing minutes. Then they pump them full of spunk as the bubbles come up.

Oskar forces Stefan to sit on the bottom of the hot tub with his legs over Stefan’s shoulders. Stefan jerks his cock while holding his breath as Oskar watches. His lungs are straining when Oskar lets him up.

They quickly get into a 69. Then they suck each other’s dicks underwater, trying to see who can outlast the other. They struggle and bubble until heaving lungs cause both cocks to go off in hungering mouths.

(Inspired by the drawing by Graphite which was created for Oeff)