Mouthy slut gets what’s coming to her

“You can’t do this to me!” Emma blustered as Stephanie hogtied her. She was lying naked and was now being chained on the edge of her backyard pool. “This is my place! You can’t just come in here and treat me like this!”

“Shut up, slut!” her boss from the marina barked at her. “You were mouthy and bitchy all afternoon! So you’ve got this coming to you!”

“I don’t have anything coming to me! You can’t tie me up like this! You’re gonna pay for treating me this way!”

“Who’s gonna pay?” Stephanie asked with a chuckle. “Certainly not me. You’re the one who likes to play bondage games. The authorities will simply think you tied yourself up, slipped into the pool and couldn’t untie yourself in time. Now it’s time for your evening swim.

Emma let out a cry as Stephanie put a foot against her. Then she was rolled off the side of the pool into the water. The chains took her right to the bottom.

She looked up to see her scuba tank sitting a short distance away. Her regulator was just out of reach; she couldn’t get to it. The bitch was going to let her drown with a source of air just beyond her grasp.

She heard a splash and saw Stephanie come down naked toward her. Her boss reached over, took a puff from the regulator to make sure it was functioning and then put it between Emma’s lips. The bound woman cleared it and then moaned weakly, grateful to be getting air as she refilled her starving lungs. 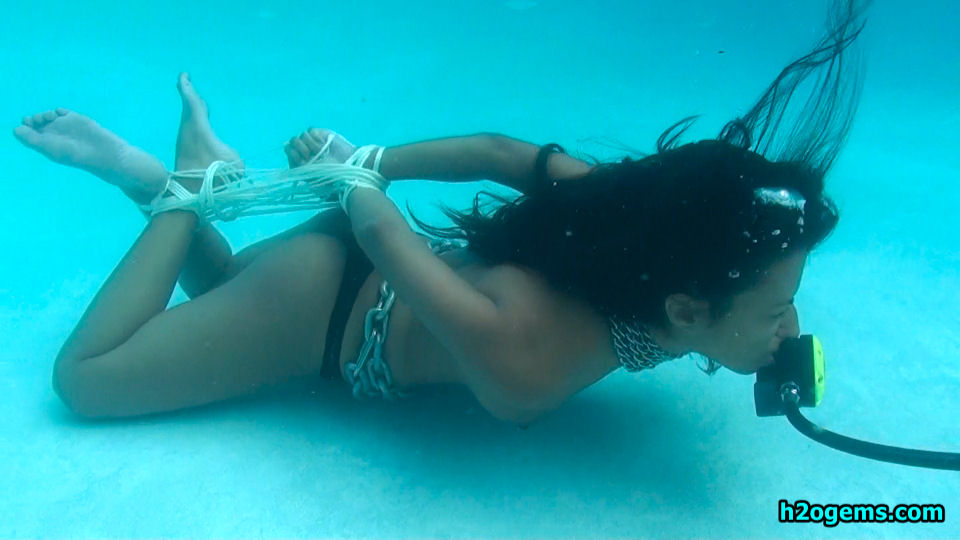 Stephanie waggled her finger at her… “Ah – ah – ah!” Then she stuck up one finger… “You’re only getting this one refill.” Emma’s eyes went wide the moment Stephanie pulled the reg out of her mouth and put it between her own lips.

Emma wriggled and squirmed, trying to free herself from the ropes tying her arms and legs together. The chain around her waist and the one around her neck kept her from drifting upward. She realized she wasn’t getting to the surface under her own power.

She begged Stephanie with her eyes to help her back up. Her boss pulled the reg from her mouth and blew her a kiss. Then she smiled as she waved “Bye-bye, slut!” before putting the reg back into her mouth to enjoy the show.

Emma shook her head… “Gawd, NO! She’s going to watch me drown!” Then she really started to wriggle and squirm.

She bubbled anxiously while desperately trying to free herself. That’s when her boss started touching her breasts while rubbing her crotch. Apparently the bitch was becoming more and more excited at her employee’s struggles and her desperate plight.

Emma’s cheeks puffed as she struggled to hold her breath. Maybe Stephanie was only kidding. Maybe she was going to wait until the very last moment before giving her the regulator. But the more her lungs heaved, the more her boss rubbed herself, obviously getting off on her suffering.

Emma really started to wriggle and squirm, becoming more animated from her growing breathlessness. Her boss smiled as she rubbed herself that much harder, breathing deeply from the regulator in her mouth as she enjoyed the show. Emma shook her head in growing panic, her eyes wide with fright.

Stephanie pulled the reg out of her mouth and offered it to her… “You need this, you little slut?” Emma mouthed for it, but the bitch held it just out of reach. Her boss shrugged her shoulders as if to say… “Fine! If you don’t want it…” Then she put the reg back between her lips, smiling with wicked amusement.

Emma cried out in a flurry of bubbles, her chest heaving from lack of air. She couldn’t hold her breath much longer. Panic swelled within her as she lost a big burst of bubbles.

All of the sudden she started thrashing about in a panic. She gulped a huge lungful of water. Immediately she began spasming and convulsing from the intrusion of pool water into her lungs.

Stephanie moaned as she rubbed herself even harder. Watching her employee drown was the hottest thing she’d ever witnessed. Emma shuddered until she began to orgasm as she drowned in her very own backyard pool. 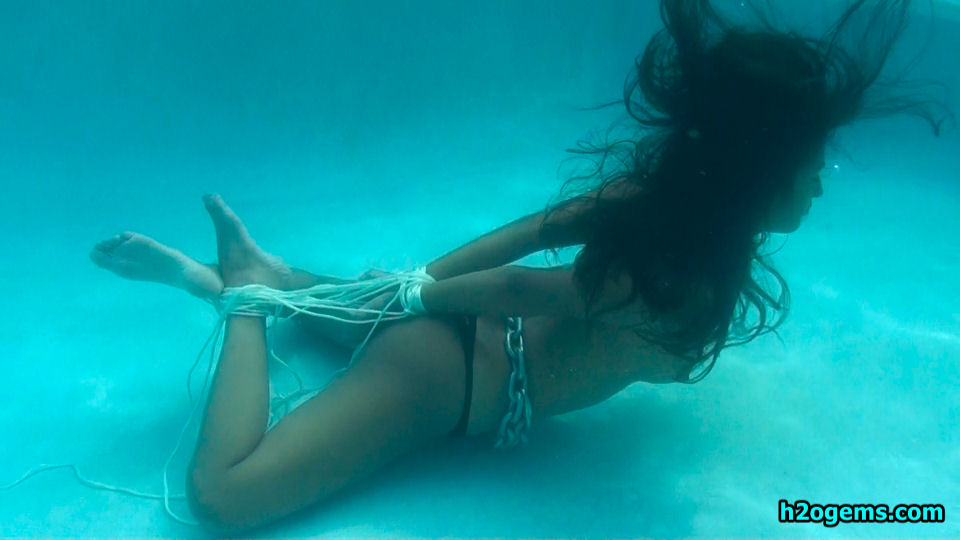 (Pictures are previews from h2ogems.com “Unsuccessful Escape Challenge” and are for illustration purposes only.)