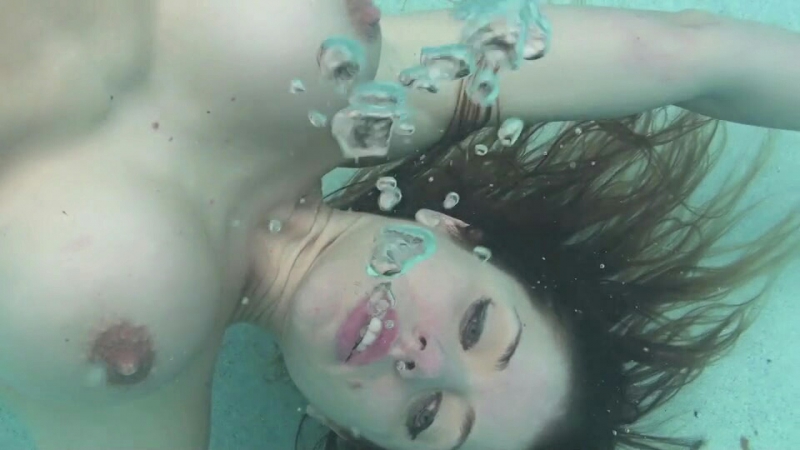 She quickly figured out what blowing bubbles did to me while I was in the water watching her. I would get so hard and she would see my tenting Speedos. That just made her sink to the bottom where she deliberately blew more of them.

What really got to me was when she started play-acting. She would start hitching and jerking as though she was drowning underwater. That really made my cock hard.

We got to where we would swim in public pools, going into the corner of a deep end. She would blow bubbles for me until I got really hard. Then she would try to suck me off underwater before someone got close enough to spot what we were doing.

One day we went to a pool in the morning hours when we had it mostly to ourselves. She snuggled right up to me and kissed me. Then she told me, “Now I want you to drown me.”

I playfully pushed her down into the water. She looked right up at me with what looked like fear in her eyes as she released her air. Then she started hitching and jerking around.

I thought she was really drowning, and I hastily pulled her back up. She grinned at me as she gasped for breath. “You should have seen the look on your face while I was ‘drowning’. You looked so excited and your cock was so hard. Now drown me again.”

She got a big breath before I pushed down on her shoulders again. She went right down, struggling and thrashing about. But she never once tried to knock my arms away from pushing her down.

She went into those sexy spasms again as she coughed up bubbles. Then she went limp in my grasp. I kept her down for a few moments. Then I panicked and pulled her back up.

We popped up where we both gasped for breath. She was just fine. “Let’s do it again,” she told me coyly.

She looked around to see we had that corner of the deep end all to ourselves. The nearest swimmer was clear across the pool sitting in the shallow end. Then she went under and pulled my suit down off my legs.

My hard cock sprang free. Then she gave it a tug as she declared, “Now drown me like you mean it.”

I popped her top, deciding what was good for the goose, you know? Then I pushed her under. Down she went, bubbling and wriggling about like she wanted out of my grasp (although she certainly wasn’t trying very hard).

She released a ton of sexy bubbles as she pleaded at me with her eyes. But I suddenly wasn’t sure if she was pleading for me to drown her or for me to haul her back up. I chose the former.

We went all the way to the bottom where she put on this incredible show. She coughed up this sexy burst of bubbles which triggered my climax. My cock spurted into the water as she settled onto her back ‘with her lungs flooded’.

I stared at her in amazement. Then she grinned at me. She grabbed her top and I grabbed my bottoms before the two of us returned to the surface.

“I’m glad you shot your load while I was drowning,” she giggled. “You have no idea how hard I came. We’re going to have to do that again.”

One night we snuck out to a pool after hours when it was dark. Jynx had wanted to, and I couldn’t tell her no despite my urges against breaking and entering. She tried to reassure me we were only going for a sexy swim on a hot, muggy night for some drowning games.

All we had was a little moonlight as we ditched our suits in the water. She went right to the bottom where she started blowing bubbles up at me. Then she rose to the surface with this knowing look in her eyes.

“Drown me! You know you want to.” And with that I pushed her down into the water.

My cock got hard; her nipples became quite erect; and she released a ton of bubbles. We went all the way to the bottom until I pushed her flat on her back. With no air in her lungs it was easy for her to remain on the bottom.

She had this blissful look on her face as she hitched and shuddered. Then she went limp. That’s when I hauled her ass back to the surface.

When we popped up she panted, “Gawd; I came so hard! You look like you were close too.”

“Then I want you to drown me, baby! Push me down and drown me! Leave me there and I’ll come back up.”

“YES!” and she glubbed as I pushed her down.

She thrashed about in my grasp, losing those sexy bubbles as I forced her to the bottom. Then she began hitching again, looking for all the world like she was vomiting at the bottom of the pool. It was so sexy the way she coughed up bubbles.

My cock almost went off as I headed for the surface. She released what little air she had left as she came up to me. She panted, “That orgasm was even more intense!” Then she gave me an accusing look.

“Saving it for when I drown for you this last time?”

She reached out and stroked me. Then she whispered into my ear, “Now I really want you to drown me. Do it like you fucking mean it. Drown me and spurt your load in the water. Tell me you’re going to drown me and mean it!”

I pushed her down toward the bottom, my cock hard and throbbing. Almost immediately she gurgled in my grasp. This time her thrashing seemed incredibly realistic.

I was so turned on that I forced her all the way to the bottom. She coughed and gurgled, her body hitching like crazy. That’s when my cock went off as I spurted load after load into the water.

She settled down until she stared upward with unseeing eyes, a blissful look in her expression. A couple of sexy stray bubbles slipped out past her parted lips. I moaned before I headed for the surface, my own lungs empty.

I popped up gasping for breath. But Jynx never moved. She stayed like that on the bottom while looking up at me.

I shot down and swam right for her. I scooped her up in my arms and tried to haul her to the surface. She felt so heavy in my grasp!

I got her up and worked her out of the water. I tried doing CPR on her, but there was no response. I was heartbroken.

I called the paramedics and they came and tried to work on her. But she was gone. I told them what had happened and planned on accepting my punishment. But I guess they decided losing my girlfriend in a crazy after-hours pool stunt was punishment enough.

At the funeral I ran into her friend Diane. She saw how devastated I was and told me not to be affected by it. Then she took me aside for a private chat.

“I was talking to Jynx a few days before the drowning. She told me she was going to get you to drown her for real. She said she wanted to have a huge orgasm and that she wanted you to enjoy her final moments.”

That sort of helped me get on with life. Somehow I was able to put it behind me. Eventually I learned to forgive myself, knowing she would have wanted it that way since it was her decision.

But sometimes she visits me in my dreams. She comes up to me naked in a pool with people all around. Then she gasps, “Drown me! Do it like you mean it!” And all around us I hear swimmers telling me to drown the whore.

I usually blurt out, “Drown, you fucking bitch!” She always gasps “YES!” Then I force her to the bottom of the pool where she thrashes about while gurgling her life away.

I always cream myself whenever that happens. Maybe it’s because in my dream we’re always surrounded by all sorts of people egging me on to drown her. And at the height of her spasms and convulsions I see guys’ cocks spurting as women eagerly rub their pussies, all of them underwater holding their breath while watching us.