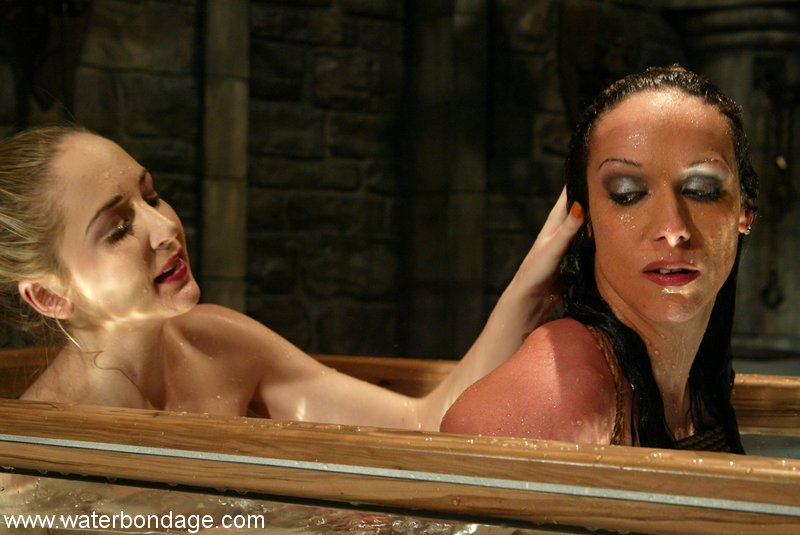 I had reached the end of my time with Mistress. It had been a nice, long run. But she had finally grown tired of me. I think it was the younger girls she’d brought in that were distracting her from spending more time with me.

As soon as I’d said it, she perked right up. I knew then I’d gotten her attention. She loved abusing bitches in the water.

It was her favorite way of torturing a girl. And I knew she loved drowning them most of all. So I’d chosen for her to enjoy our last moment together by her drowning me.

That afternoon I found myself tied up and helpless in her fishtank. She loved to call it her “tank of sexy bubbles”. I called it her “underwater torture tank” as the orgasms I received in it were exquisite torture.

She pulled my head up, allowing me to gasp for breath. Then she lovingly caressed my hair. That’s when I realized just how much I had missed her attention.

“So this is the way you want to go?” she purred at me.

“Suck water, bitch!” and down I went. 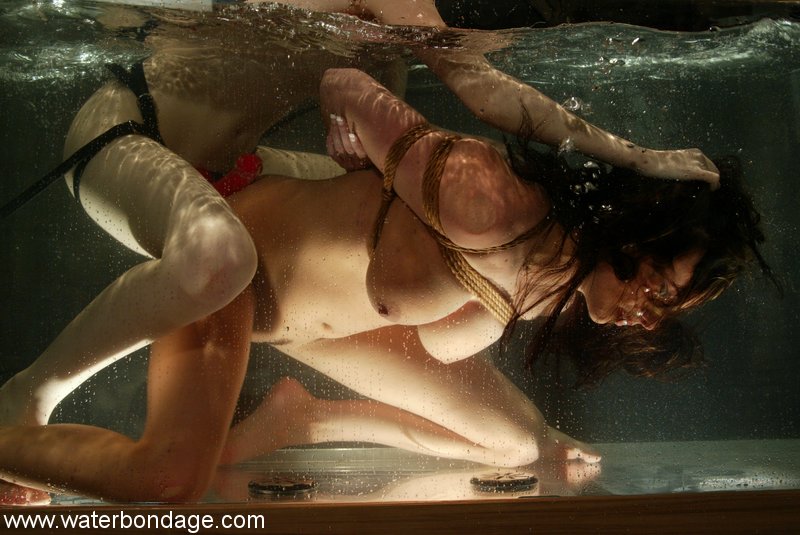 I bubbled after having been caught off guard. She reached under and groped my tits. I moaned and bubbled some more.

She pulled me back up, allowing me to gasp for breath again. “You know I’m looking forward to drowning your sweet ass; right?” Then she pulled me over backward, taking me down on top of her. 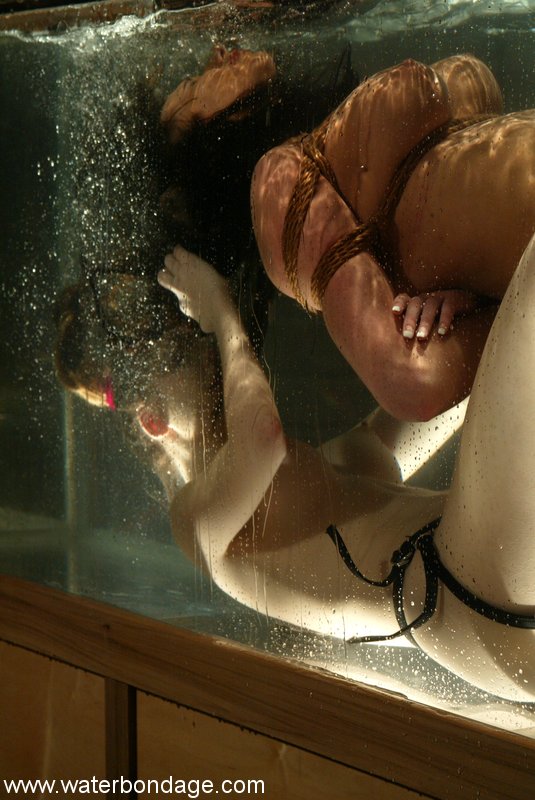 I struggled in her grasp, knowing how much it turned her on. I tried to hold my breath. But my heart was pounding a mile a minute from my fear and arousal.

She let me back up and I came up gasping. Then she forced me back down on my knees, her hand grabbing onto my hair again as I bubbled helplessly. Up at the surface I heard her gasp, “You wanna get fucked, Sasha?”

I bubbled and nodded. My response was not satisfactory. “I said ‘Do you wanna get fucked’??” I nodded and bubbled again.

She let me up and I came up gasping. Then she worked herself around in front of me. “Get my cock, ready!” and she pulled my head down.

She forced it between my lips and fucked my mouth hard. I gagged up bubbles as she hit the back of my throat. “Do you want to drown for me, Sasha?” I grunted and nodded with a mouthful of “cock”.

She pulled me up for a quick gasp for breath before pulling me right back down. My heart was going a mile a minute. I was growing more fearful, even as my arousal intensified.

She gagged me with her “cock” several times before letting me up to catch my breath. I gasped loudly, panting like crazy. I could tell by her erect nipples as well as the look in her eyes just how turned on she was. It had been too long.

My head was still being forced underwater when I felt her push it inside me. Then she really started ramming me with it. I cried out with fear and excitement, bubbling like crazy.

“FUCK ME!” I bubbled as she thrust pleasure into my throbbing cunt with that strap-on. “FUCK ME HARD! DROWN ME, MISTRESS!” After all, her excitement was my excitement. 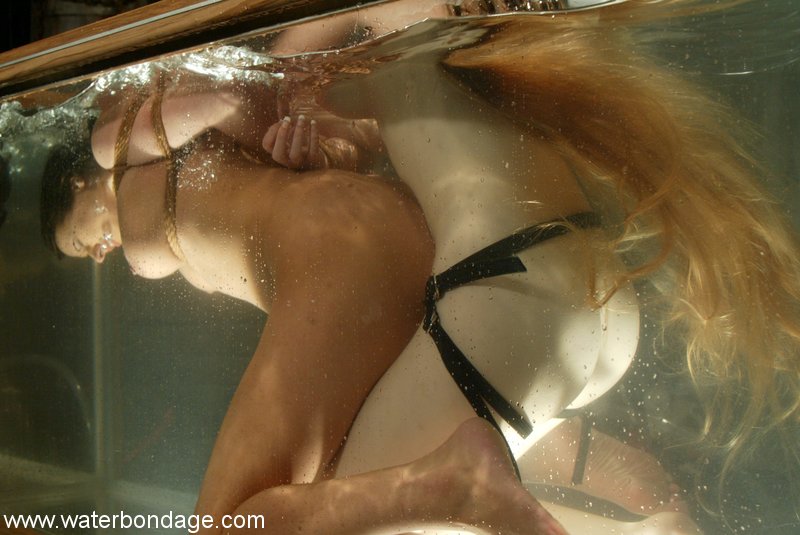 She pulled me up for one quick gasp for breath. Then my head was shoved back under as she fucked me hard. I bubbled as I cried out.

“YES, MISTRESS!” I cried out in a froth of bubbles. My lungs were heaving like crazy.

I came up gasping wildly for breath. The orgasm had been intense and welcome. Gawd; how I’d missed them!

“I had no idea how much I missed playing with you underwater,” Mistress told me as she panted for breath. Then she reached for the dive mask and snorkel she’d left on a nearby table. “I’m glad you chose drowning. I’m going to love watching you drown.”

“I live for your pleasure, Mistress.” 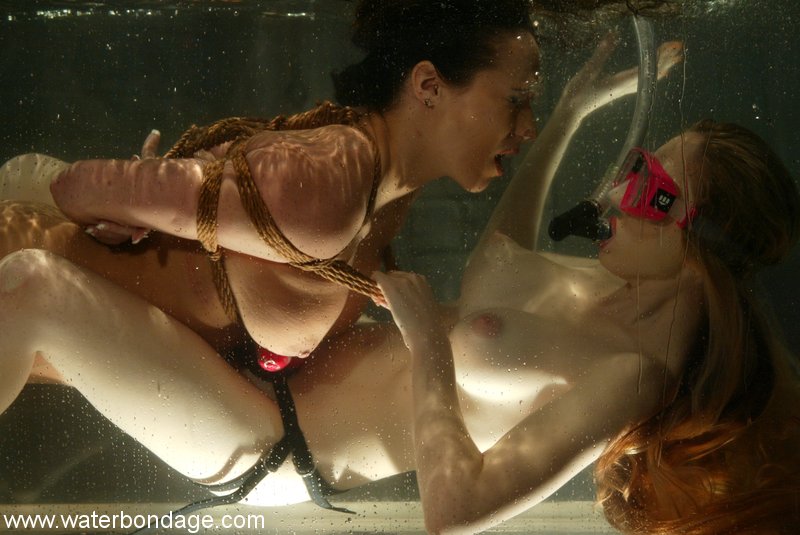 She moaned with lust as she looked right at me. In no time at all I felt my lungs start to burn. I hadn’t gotten much of a breath. But I think she wanted it this way.

She kept me down with her as my lungs really began to ache. I saw the lust in her eyes. She was really looking forward to watching me drown.

It wasn’t long before I felt a surge of panic. I struggled violently in her grasp. But I could not escape, nor would she release me.

I heard her moan, “Yes – yes – YES!” Then my lungs gave out. My eyes flew open in horror as I started swallowing water.

Mistress kept me down for the longest time, panting into the snorkel as she looked at my lifeless eyes. “Fuck, Sasha; that was incredible! I’m going to remember this moment for as long as I live!” Had I still been alive I would have been thankful for bringing her such pleasure.

(Inspired by pics from waterbondage.com)