The first one was easy. Corinne prided herself on her skills. All it took was a subtle bump and a deft hand into his pocket to retrieve it.

The second one was almost as easy, especially since he’d been drinking. He even bumped into her instead of the other way around. So she allowed him to grab her as she’d made like she was going to fall.

He caught her and leered at her beauty. She gave him her most come-hither look as she batted her eyes at him. And just like that she had a second haul as her hand slipped down and relieved him of his funds.

She found a third traveler at the bar who looked like he had a lot of money. He also looked like he would defend her honor if the other two discovered their missing pouches. So she struck up a conversation with him.

It only took ten minutes before she got a kiss out of him. At the same time her hand slid inside his trousers. When she pulled it back out she had an even bigger haul then the previous two.

She batted her eyes as she excused herself to go freshen up. But she kept on going when she saw the back door. A few more steps and she would be home free.

She’d just picked out the route she intended to take when a hand grabbed her shoulder. She gasped with a start as she turned to see the burley manager. Behind him was the man at the bar she’d recently relieved of his hard earned wages.

“This the one?” he growled.

“That’s her,” her victim declared, eyeing her coldly.

Her delay proved to be unfortunate. A voice from somewhere inside the club declared he’d just been robbed. That’s when the manager began pawing her while demanding, “Where is it?”

“Unhand me!” Corinne demanded as she struggled in his grasp. Then she started to scream she was being assaulted. That brought a couple more patrons as well as a cook out into the back of the club.

The manager found the three pouches and pulled them out. “You’ve had a busy night, miss.”

“Those are mine!” But the jig was up when her mark at the bar identified the one as belonging to him. It was quietly handed back to him with an apology from the manager. The other two patrons decided it wasn’t their business and headed back inside.

She tried to struggle out of the manager’s grasp. But he had hands of steel. This wasn’t going down the way she’d anticipated.

Her other two targets soon came out back. They quickly identified the other pouches as belonging to them. The manager quietly handed them back to their respective owners.

“No harm, no foul?” Corinne offered with a smile, embarrassed she’d allowed herself to get caught. “I guess I’ll just be on my way.”

“Not so fast,” the manager told her. Then he nodded at the cook who turned and disappeared back inside the club.

“Hey, let me go! Everybody’s happy now. They got what was coming to them, right?”

“But you haven’t gotten what’s coming to you yet, miss. We run a respectable club here. We can’t have thieves like you depriving our customers of their hard-earned wages.”

“Let me go! Let me go and I’ll never set foot inside your damned club again!” But he maintained his grip on her.

She turned to the server still on her knees sucking cock. She didn’t seem to be the least bit interested. Nor was the man on the receiving end of her ministrations.

The cook returned with a bunch of rope. “Hey, what’s that for?” Corinne gasped in alarm. A moment later the cook was tying her wrists behind her back.

“Hey! You can turn me over to the authorities. I’ll go willingly.” If he would just let her go she could make a break for it. But the cook ignored her as the manager kept a firm grip on her.

She looked at the man she’d robbed, pleading for him to do something. His expression was cold and hard. Then she saw the cook forming one end of the long rope into a coil.

“Hey; what gives? You can’t do this to me!” Now she really began to panic.

A noose was formed before the rope was throw up over a part of the metal stairwell leading upward. Corinne cried out in horror. That’s when the manager produced a gag and threaded it through her mouth, stifling her protests.

Once more she looked at the man she’d robbed, her eyes pleading for him to stop what they were about to do. He didn’t even bat an eye. Then the cook leaned down and tied her boots together at the ankles with another length of rope he’d brought out.

Corinne grunted as she shook her head. Surely this couldn’t be happening, right? They weren’t really going to hang her, were they??

The cook brought the noose down around her throat, brushing her red hair out of the way. Corinne grunted as she shook her head again. Then the cook pulled on the other end until he took all the slack out.

The manager angrily ripped her blouse open with one hard pull, revealing she was not wearing a bra. He was not moved at the attractive sight before him. “We don’t take kindly to thieves in our establishment, miss.” Then he helped the cook pull on the free end of the rope.

Corinne’s eyes flew open as she was hauled several feet up into the air. Almost immediately she rasped and grunted from the pain as the noose tightened around her throat. Then she started kicking, her blouse fluttering around her as her breasts were exposed to the cool night air.

Corinne’s face turned red from lack of oxygen as she jerked her arms behind her back. Her blouse came down, hanging up on her bound arms and fully exposing her chest. She kicked her legs in a vain effort to ease the agony around her neck.

She looked down to see the cook and manager look up at her. Then they turned and calmly walked back into the club without giving her a second thought. The man at the bar she’d robbed watched another few seconds before he too turned and walked back inside. 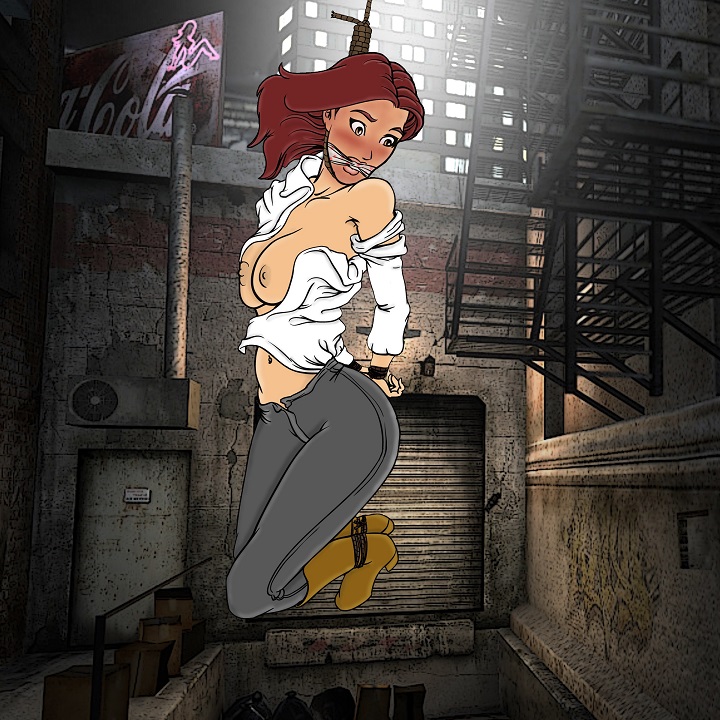 Her throat closed off, causing her to kick harder. She jerked again as she fought one last time to free herself. Then Corinne hung limp, her body gently swaying back and forth.

With a grunt the man came into the mouth of the server. She dutifully swallowed it all, sucking him clean. Then she finally stood up, licking her lips.

(Inspired by her drawing which I included.)