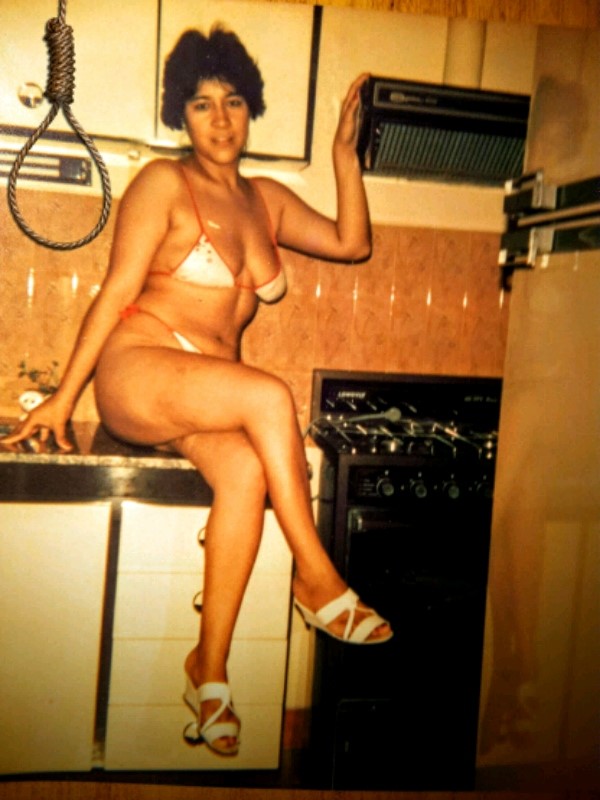 She told me she wanted to be a dark fetish model. I told her I would come and take pictures for her portfolio. She agreed.

I went to her house and discovered she’d put on a skimpy bikini and some footwear that showed off her toes. I started taking pictures while she posed on the counter. Then I asked if I could bring in a prop for our photo shoot. She said it was ok with her.

I went out and brought in a rope with one end fashioned into a noose. I asked if I could hook it into the ceiling above her for more photos. I told her adding a dark fetish object in her pictures would enhance her reputation as a dark fetish model.

She said it would be ok, so I hooked up the noose into her ceiling. Then I started taking photos with the noose in the picture. She seemed to like that.

I used the noose to frame her face in a couple of the photos. Then she asked if I wanted to take a couple pictures with her head in the noose. I told her that would certainly make her look like a dark fetish model.

She came down from the counter, stood under the rope and put her head in the noose. I took several more pictures as she stood there posing. Then she smiled as she brought her hands behind her back as though she was all tied up.

I took a few more pictures. But I tried to take them so her hands were not visible. I said if people saw she was not tied they might not take her seriously.

She asked what would happen if she removed her bikini top and I used it to tie her hands behind her back. I told her I thought it would add to the pictures I was taking. So she offered to remove it for me.

She asked how the pictures were coming. I told her I thought she was going to make a great fetish model. It was just too bad we couldn’t make the noose photos more realistic.

She asked what I meant by that. I told her she was just standing there, but there was no element of a real hanging. She was simply posing. If it looked like she was getting ready to hang, the pictures might get a better reaction.

She told me she had a little footstool in the living room. So I went and fetched it. I put it under the hook for the noose and watched as she climbed on.

She stood there looking worried as I snapped photos. Then she looked excited, nervous, happy and terrified. I snapped pictures of each expression she wore.

She asked what I thought, and I told her this looked much better. I said what might really sell the pictures was if the noose was tighter and she was up on her toes. Then I gave her a look before telling her I didn’t think she could balance very well and that we’d better not.

She gave me a snort of disgust as she tried to rise up on her toes. Her balance wasn’t very good and I told her so. “Tighten the noose,” she told me. “That will help me maintain my balance.”

I tightened the noose and pulled her up onto the tips of her toes. “Better?” I asked. “Can you balance a little better?” She nodded as she rasped a little for breath.

I took more photos, telling her the way her nipples were erect would really sell the photos. She was too busy trying to get a decent breath. But she nodded as though she understood what I was trying to say.

I looked her up and down and told her she was the best fetish model I had seen thus far. She smiled as she rasped a little. Her arms jerked somewhat behind her back.

“Shall I take the best pictures that will make you look like the perfect dark fetish model?” She nodded her head as though urging me to hurry it up so she could come down.

“Ok, Laura.” Then I put my foot on the stool and shoved it out from underneath her.

Her expression changed to one of horror as her feet fluttered for the floor. “These are perfect!” I gasped as I snapped pic after pic. “Laura, you’re doing great! You’re the best model I’ve seen!”

She kicked and twisted, her mouth opening and closing as she rasped for breath. I told her she was strangling wonderfully. Everyone was going to know she was a real dark fetish model for sure. She just rasped and gurgled as her legs kicked.

She thrust her chest out, her breasts bouncing as her lungs heaved breathlessly. I snapped all the pictures I could get as she kicked, danced and spun. She finally settled down, her legs fluttering as her feet cocked and curled.

I told her, “Laura, I think these are going to be great.” That’s when I saw urine trickling down her legs. “Aww, you didn’t have to do that for me, Laura. But it will certainly take more pictures of that so I can add them to your portfolio.” And with that I snapped several more photos showing the urine dripping off her feet.

She hung limp and quiet, gently swaying back and forth. She looked so sexy that I snapped several more pictures before I left. I told her, “Thanks, Laura. I think you’re going to make a great dark fetish model. I’ll let you know when I hear back from that website.” Then I waved with a smile, telling her she could keep the rope.