I was working in the other half of my suite when I heard the maid call out “Housekeeping!” It was too late. A moment later I heard the key card in the door before it opened.

I cursed inwardly as I moved to the sliding door. I peered through the crack into the other half of my room, the section that held my bed, table and night stand. Sure enough, a woman in a housekeeping outfit had barged in and was now foolishly looking through the briefcase I’d left open on the table.

I shook my head at my carelessness. I couldn’t take the chance she wouldn’t report what she’d seen to someone. She had to be eliminated.

I sighed as I slid open the door and entered the room. I could tell I’d startled her by the way she jumped at my appearance. “I’m sorry, sir,” she said in broken English. “I did not know you were in room – MMMPH!”

My hand clamped over her mouth where she began to struggle. But I was much bigger and stronger than she was. I spun her around and pulled her to me, holding her from behind. Then I pinched her nose shut with my thumb and finger, cutting off her air supply as I kept my hand over her mouth.

Instantly she began to struggle in earnest. I held her tight until she finally passed out from lack of air. She went limp in my grasp, causing me to catch her before she collapsed.

I laid her down on the floor where I rolled her onto her stomach. Then I went into the other room to fetch some rope from my bag of tricks. I never expected I might be forced to use it on some stupid maid.

Within a couple of minutes I had her ankles tied together. I secured her wrists behind her back. Then a length of rope went around her chest, pinning her arms to her body. Afterwards I went into the bathroom and proceeded to start filling the tub, deciding I would give the maid a final bath.

She was coming to and starting to struggle again when I came back out. I was forced to drag her awkwardly into the bathroom, struggling to cover her mouth with my hand to keep her from crying out. The bitch resisted me, but somehow I was able to lift her up and tumble her into the tub onto her back.

I looked into the tub and sighed. The water wasn’t high enough yet. I would have to wait a few minutes longer.

As she squirmed and struggled I forced my hand over her mouth again, forcing her head down while mentally willing the tub to fill faster. She kicked and thrashed about, spilling water over the side. She got me wet as she tried to scream.

I mentally cursed her intrusion into my room. I hadn’t wanted to kill some nosy housekeeper. I just hoped the sound of the filling bathtub would be enough to deter anyone else from coming into my room.

The water level finally climbed above her face. I removed my hand and focused on holding her head down by grabbing onto a handful of her black hair. That’s when the bitch really started to struggle.

Her mouth opened as her eyes went wide in terror. Somehow her wrists slipped out of their bonds. Her arms started flapping up and down in the tub, causing me no end of grief.

The rope around her chest kept her from raising her arms too high so as not to do any serious mischief to me. I cursed my stupidity at not securing her better. Maybe I should have strangled her instead of drowning her.

It wasn’t long until bursts of air started exploding out of her mouth. For a moment she really started thrashing about. She tried to scream, but it only came out as a bubbly gurgle.

I saw her breathing reflex kick in. Her chest heaved as she inhaled. It was then my task got a whole lot easier. 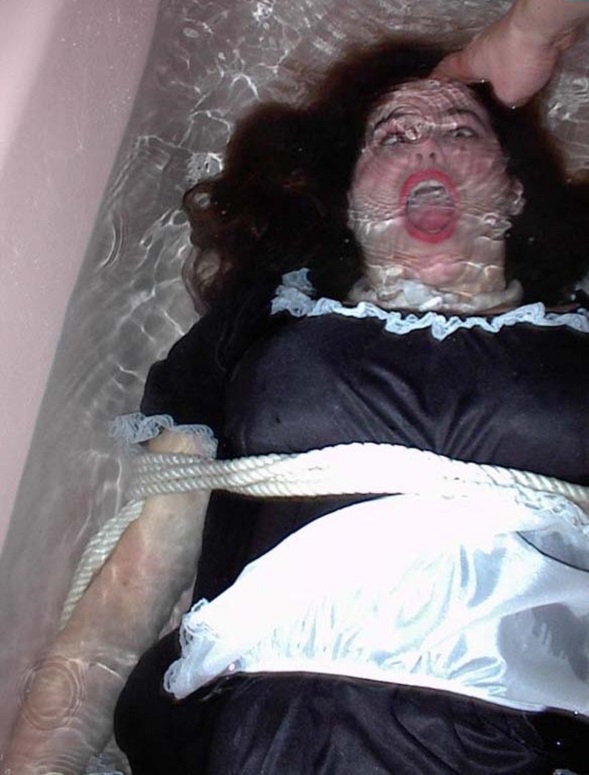 The foolish woman began spasming and convulsing as her arms waved feebly in the air. Her mouth opened and closed as though that would be enough to pull air into her flooded lungs. Her head went from side to side until her struggles lessened.

Air bubbled out of her mouth with each convulsion. Her lips opened wide as she tried to breathe. Then she shuddered before letting out a bubbly sigh.

A small trickle of air dribbled out of her mouth from somewhere deep in her lungs. Then she went still except for an occasional muscle spasm. Her eyes were open wide, a look of horror in her softening expression.

“I wish you wouldn’t have come in on me like that,” I sighed down at her. “Stupid bitch!” Then I stood up and proceeded to dry myself off, knowing I would have to check out of my room much sooner than I’d anticipated.