Jesse was a feisty one from the get-go. She was loud, obnoxious, and defiant. I had problems with her from the minute she entered the prison.

She took her anger out on me the most, although I have no idea why. Maybe she found out I was going to be her executioner. Every visit was an adventure with her.

Once she attacked me and knocked me to the floor. Another time she damn near strangled me to death. She was your basic pain-in-the-ass.

I put in a request to execute her special. Naturally I got permission. After all, word had gotten around of her attitude and her attacks on me. Everyone was sympathetic, including the warden.

On the day of her execution I showed up at her cell with a white cloth in my hand. I told her, “Ok, Jesse. Today’s the day you die. I get to do you special.”

“You bitch! You haven’t got the guts!” Then she tried to attack me again.

I anticipated her charge and deftly spun out of her way. I got her into a half nelson before applying the chloroformed cloth to her face. She panicked when she discovered what I had done.

In moments she was out like a light. That’s when Mabel came into the cell with the items I’d requested. I’d made her wait out in the corridor, confident in my abilities to subdue the stupid bitch.

When Jesse awakened, she was just the way I wanted her: in a purple latex straightjacket. ‘Let’s see you get out of that, bitch!’ I thought proudly. I’d secured her, but it did nothing to deter that defiant attitude of hers…

“Knock me out and put me in a tight suit, did you? You fucking pervert! You can’t treat me like this! Let me loose so I can beat the shit out of you!”

“Shut up and get a move on,” I told her as I pushed her out the cell. “You can walk… or I can drag you by your hair. I’ll probably end up pulling it out by the roots, but today I really don’t give a fuck.”

I grabbed a handful and started to pull her forward. “All right – all right; I was just kidding! Can’t you take a fucking joke? You bitches got no sense of humor!”

I took her outside, only to push her in a different direction. “Hey, where the hell are we going?”

“I suppose you think you’re hot stuff putting me in latex while you’re wearing that black monkey outfit.”

“Don’t you ever know when to shut it?”

She finally began to wriggle and squirm as though something wasn’t right. “Hey, what did you put inside me?”

“You’re kidding, right? There’s no way in hell I would ever touch your cunt.” After all, I had left that to Mabel’s capable hands.

“What did you do to me?? What the hell did you shove in me?? I want to see the warden!”

We rounded the corner to an empty part of the grounds. There was a blank brick wall with a boarded up window they had left untouched because the room on the other side was closed off and not in use. But what caught her eye was the noose and the stool.

“Hey, what the hell is this?? What do you think you’re doing?”

“Your lawyer quit two days ago because of your piss-poor attitude. And the warden gave me permission to spend some quality alone-time with you. After all, you WERE sentenced to hang to death, remember?”

“No more rights, Jesse. Your time has run out.”

“You can’t fucking do this to me!”

“Up onto the stool Jesse.”

“You can climb onto the stool or I can noose you and pull you up the hard way.”

I helped her up and then grabbed the noose. They’d made it nice and thick as per my request. I wanted Jesse to last a while. 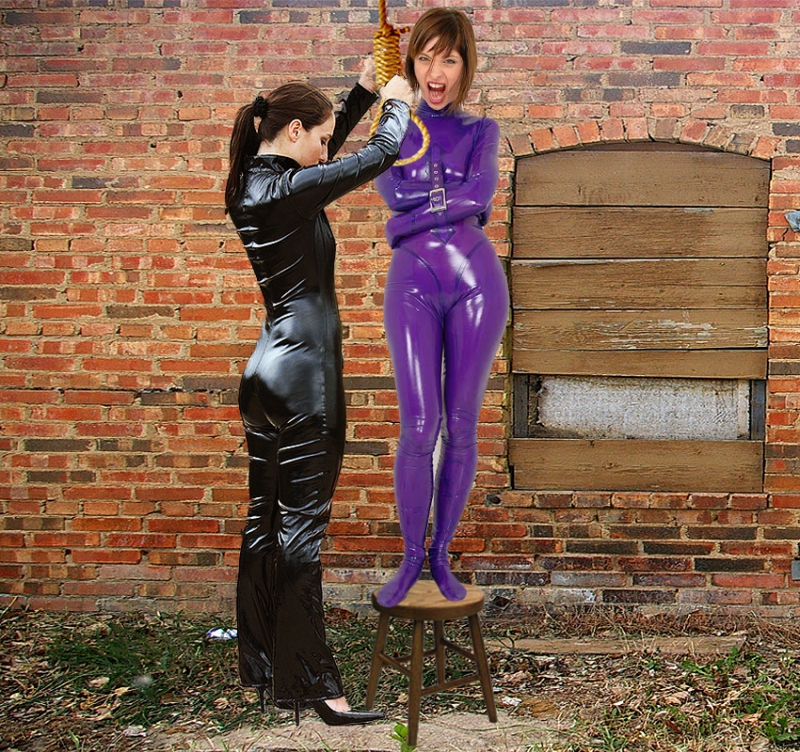 “You bitch! You can’t do this to me! Besides, you ain’t got the fucking balls! I tell you I want to see the warden! I want to see a fucking lawyer! I’m tired of your ugly face, ok?”

“Tough shit,” I told her as I looped the noose around her neck. I snugged it up nice and tight before I worked to take most of the slack out of it. She was still trying to be defiant, but now her chest was heaving with fright. I’d finally penetrated that pea-sized brain of hers.

“Nothing to talk about, Jesse.”

“I got money stashed away… from that job I pulled? You put off my hanging and I’ll tell you where I hid the loot.”

“Right now money means nothing to me, Jesse. What’s important right now is the pleasure of seeing you hang for a long time at the end of this noose the guys generously prepared for me.”

“You’re not reasonable, Jesse… and you sure as hell don’t know how to act like an adult.”

“Fuck you!” and she tried to spit on me.

I stepped out of the way and avoided it. Then I sized her up. She was really starting to gasp for breath.

“Just one thing more I want to see,” I told her as I reached into a pocket. I pulled out the remote and pointed it right at her. When I activated it, the results were dramatic.

Her eyes flew open as she stiffened in alarm. Then she started to gasp as she writhed like she had ants in her pants. “What… what did you d-do to me?”

“Mabel inserted a little something in your cunt for my enjoyment, Jesse. It’s just a vibrating egg. But it should make your dance most enjoyable.”

“You first.” Then I kicked the stool away.

She bounced as she dropped, dangling above the ground by about three inches. She tried to stretch her feet as she wriggled and writhed. Then she really started squirming as her legs began to fly.

I could tell by the look in her eyes how terrified she was. But she was still getting air. She grunted and gurgled as her legs flew every which way.

I knew she was getting sweaty under that latex. I knew it was adding to her pleasure and her suffering. I just stood there and admired her performance, getting all hot and bothered myself.

Her first orgasm was incredible; she threw her chest out as she humped the air. Then she settled down, gently swaying back and forth. But she could still breathe; it still hurt; and she still wanted to escape her torment.

She started kicking it up again, her desperation making her even livelier than before. “Don’t worry, Jesse. I know how much you hate everyone. The warden assures me you’ll hang out here all by yourself for the required two hours before they put you in a pine box. But I’m keeping the outfit. You’re going into the ground naked.”

She rasped and gurgled as she fought the noose and the constraints of her outfit. The egg buzzed deliciously inside her, adding that incredible eroticism to her dance. Then she thrust her chest out for me, humping the air as she fucked the noose again.

This time the coil wrung it right out of her. She hung limp, gently swaying back and forth. Drool spilled off her lips as her tongue protruded.

(Inspired by the manip by Toni.)