A bonus story for a month with 31 days. A repost of a re-edited story.

“If you promise not to scream, I’ll remove the gag. If you cry out, I’ll just put a bullet in your brain and be done with you. Understand?”

Renee nodded fearfully. At least she’d get the taste of the cloth out of her mouth. The fact it was dark outside frightened her even more.

She stiffened in alarm when Nick shut the engine down. “We’re here,” he told Tony matter-of-factly. The cabin cruiser glided to a halt where it bobbed up and down in the warm waters of the gulf.

They weren’t that far offshore. They were stopped in a shallow spot near the marked channel between the islands that stretched along the tip of Florida, commonly referred to as the Keys. It was their dumping ground.

Renee whimpered fearfully. She was in deep shit and she knew it. They had found the briefcase with all the stolen files in her vehicle. From there it had been a simple matter to track her down and take her straight to the head of the crime family.

The Don had glanced briefly at the stolen files. Then he’d looked at his former secretary, sadly shaken his head and then declared her fate with two words… “Dump her!”

…and that was that. She’d been tried, convicted and sentenced to death in less than a minute.

From there it had been a simple matter of transferring her to the boat. Someone had gone to her house to fetch her pink bikini that she always wore at the Family pool parties. This was supposed to look like a nice little pleasure cruise out in the gulf.

“Please, Tony,” the red-haired woman begged as he brought a fifty pound concrete block to the back of the boat. It was hooked to a two-foot length of chain that ended in a shackle. As she begged for her life he calmly attached the free end to the terrified woman’s ankle.

Her heart pounded inside her chest. She was going to be dead in a matter of minutes. “Nick, I’ll do anything! I’ll make it up to you both! Please…!”

“Sorry babe,” he said with a shake of his head. “Orders are orders. You should have known better.” Then he turned on the big searchlight and pointed it down into the water. Anyone who saw it would simply think they were doing a little night fishing.

“You were a good secretary and a great lay, Renee. But you should never have betrayed The Family.”

“I’m sorry, Tony! God, I’m so sorry! I’ll do anything to make it up to you!” Her voice cracked as she pleaded for her life.

“This is what you have to do to make it up to The Family, Renee. You know that. You, of all people, should know that. Now stand up.”

He picked up the weight and carried it to the opening in the side of the boat, forcing the woman to walk right behind him because of the short chain. She was sobbing now. “Please, Tony… oh gawd… I don’t wanna die… please!”

He tossed the block over the side. It jerked on Renee’s ankle, nearly pulling her into the water. He grabbed her just in time as she let out a yelp of terror.

Tony smiled at her. “To show you what a good sport I am, I’m going to give you a couple of seconds to get a good breath if you want it. But you should just let it all out and drown. Otherwise you’ll only be prolonging the inevitable. Three… two…”

Renee gasped, blurting out “NO!” as she fearfully shook her head.

She started to scream and then changed her mind to hold her breath. Every second of life was now precious to her. She splashed into the water where she sank right to the sandy bottom, pulled down by the block of concrete..

She instinctively began pulling for the surface with her arms. But it was getting nowhere. The weight held her firmly in place. Air bubbled out of her lips and nose as she reached down, trying to free herankle.

Up at the surface Tony looked down as the ship’s big spotlight illuminated her struggle. He watched as she she flailed for the surface. Then he smiled sadly as a few trickles of air came up from her position.

“It’s a crying shame,” he sighed with a shake of his head. “She was a great lay, too. Wish there was something more I could do for her.”

Nick reached under one of the seats and pulled out a pail. “You could always give her a bucket of air,” he chuckled.

He smiled as he thought it over. Why not, indeed. So he took it from Nick’s outstretched hand, laid himself out on the floor of the vessel with his head and arms through the opening of the boat, turned the bucket over and then pushed it down into the water as far as he could.

She wasn’t very deep. Drowning them out here was to send a message whenever they were found. “One last present for you, babe,” he muttered as he pushed down on the pail. “Don’t say I never gave you anything.”

On the bottom of the ocean Renee’s heart was beating furiously in her chest. The surface was right there; it was so horrifying! She clawed with her arms, knowing she was never going to make it. But her body instinctively made the attempt nonetheless.

She felt her lungs begin to burn. They were still there; the light was shining down on her! Maybe they would change their minds and bring her back up. It was a vain hope considering she was chained to the cement block.

The light illuminated something being pushed down into the water. She felt a surge of hope despite all the evidence to the contrary. Someone was pushing something down toward her. Were they going to pull her back up?

Her heart sank when she saw that it was only a cleaning bucket turned upside down. Instinctively she reached up and grabbed for the handle. Then she tried to pull herself back up to the surface.

“She’s got it,” Tony chuckled. “Damn bitch looks hot in that bikini. I sure wish she would never have betrayed The Family.”

“What’s she doing with it?”

“Looks like she’s trying to pull herself up to the surface.” 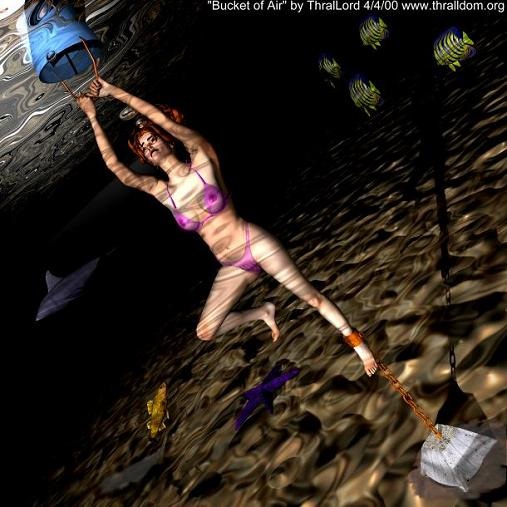 Renee held onto the bucket with both hands as another burst of air burbled out past her lips. She tried to pull it down to her, but air trapped inside made it difficult. The weight attached to her ankle was just too much.

She bubbled as her lungs began to heave. She pulled the bucket lower. It occurred to her there was air inside. If only she could get her head up into it!

She inhaled, causing the water level to rise and cover her lips. Then she lost her grip. It shot up to the surface and tipped over before it filled with water and sank to the bottom.

In the boat Tony rose to his feet. “Did she get it?” Nick asked curiously.

“Yeah; she got it. She might have gotten a breath out of it. Why; you want it back? It’s on the bottom of the ocean now. She lost her grip.”

“Naw… she can keep it. Consider it my little present to her. I gave her the bucket and you gave her the air inside.”

“You gotta be if you’re gonna be in this business, man.”

Renee held her breath as long as she could. But she was panicked, flailing hard for the surface. The light was right on her, illuminating her struggle.

She felt a convulsion in her chest as her lungs demanded oxygen. At the last moment she began to thrash about as her lungs heaved. Then she gulped water down her throat.

She coughed, snorted, inhaled again. Then she started swallowing water. Her body went into violent spasms as she hitched and gurgled.

She jerked and convulsed painfully, opening and closing her mouth in an effort to pull air into her lungs. Her arms flailed wildly, her unshackled leg kicking helplessly. She tipped her head back, coughing up water and bubbles.

Her struggles lessened as her oxygen-deprived body began to shut down. Her arms and leg waved feebly, her mouth opening and closing as she kept inhaling water. Then she settled down into little muscle spasms and convulsions.

Renee’s arms rose upward as though she was mimicking some great bird with its wings outstretched. She swayed gently in the ship’s spotlight from the current that flowed into the gulf. A few solitary bubbles slipped out through her open mouth.

The spotlight suddenly winked out. The boat engine came to life. A moment later Renee was alone in the dark among the fishes, her body losing buoyancy as she started to sink to the bottom still tethered to the cement block.

(Inspired by the accompanying picture by ThralLord)

This entry was posted in Drowning Stories. Bookmark the permalink.