A fanfiction inspired by a picture manipulation.

We were barely a week into shooting the movie when we were in the sack together. I could tell right away I was giving him everything his wife wasn’t. It was clear we were destined to be together from the start.

One day that bitch Jennifer burst into my dressing room. I was bent over a table while Brad was fucking my ass. She got one look and her face went red with embarrassment.

Instantly Brad slowed down upon seeing his wife staring at us. “Did I tell you to stop?” I bellowed at him. “Fuck me, damn you!”

“Did I catch you at a bad time?” his wife observed sarcastically, her voice dripping with hatred.

“Get the fuck out of here!” I hollered at her. “Can’t you see we’re rehearsing for our next scene?”

“Of course,” she snorted in disgust. “I forgot. You’re playing the part of the slut.” And with that she walked out in a huff, slamming the door behind her.

“And don’t come back!” I hollered after her. I don’t know whether she heard me or not.

Brad and I kept seeing each other long after the film was in the can. I was looking forward to the premiere. Then I got this call from his bitch of a wife.

“Hey there, slut. This is Jennifer. You don’t honestly think you could fuck my husband here in Hollywood and expect to get away with it, do you?”

“Of course I do! I can do any damn thing I want! You can’t fucking touch me, bitch, so don’t even try! Now why don’t you be a good girl scout and let him go?”

“Because I want him back, you stupid slut, despite any filthy place that cock of his has been.”

“Well I intend to keep him, bitch. So what are you going to do about it?”

“That’s what I thought a slut like you would say. So I’m challenging you to a duel; that is if you’ve got the tits for it. We both know you got more balls than my husband ever thought of having.”

“Bring it on, bitch. I’m am action star and I do a lot of my own stunts. What have you got in mind?”

“I suggest a duel with swords, slut.”

“Swords?? Are you fucking kidding me?? You can’t even lift one up!”

“You might be surprised, slut. So how about it? Care to take me on one-on-one?”

“Why the hell should I have a sword fight with you? What’s in it for me?”

“Oh, that’s easy. The winner gets Brad. The loser, well… she loses her head. Literally.”

“Are you proposing I chop off that sweet little head of yours, bitch?”

I thought it over for a moment. The idea of carrying her head to the premiere was something I could really go for. “All right, bitch. You’re on. How about the night of the premiere? I think there’s an empty building they’re remodeling just down the street.”

“Works for me, slut. I’m looking forward to carrying your head to your own premiere.” And with that she hung up.

On the day of the duel I took the sword I’d trained with along with the gown I wanted to wear to the premiere. Underneath my street clothes I wore black spandex. I was ready for anything.

A friend who owed me a favor let me into the building where we were going to fight. I went to the room for our duel and then slipped out of my street clothes. The bitch showed up ten minutes later.

She was also in her street clothes. She had a little travel bag I assumed contained her clothes for the premiere. I told her to go right ahead and change right there in front of me.

She stripped out of her street clothes to reveal a black athletic bra and tight black shorts. Her breasts looked pretty good pushing through that top she wore. I just snorted as I opened my sword case and took out my weapon while she took out hers.

I was visibly impressed at what I saw. The damned thing looked sharp and long. And she hefted it with remarkable professionalism. It made me wonder just how much training she’d picked up just to use the damned thing for our duel.

We hefted our swords as we began circling each other. I told her, “Are you sure all this is worth giving up your head for a husband with a wandering eye?”

“You sure it’s worth giving up yours just for trying to take another woman’s man?”

“Bitch, in case you haven’t noticed he’s mine now. If you’re smart you’ll walk away right now and I’ll consider the matter closed.”

“The only way this matter ends is with your head on my mantel, slut.”

“I’m already picturing how the crowds will react when I carry your dripping head with me to the premiere.”

“SLUT!” she roared as she charged me.

I parried her thrust, only to have her continue approaching with slashes and thrusts. I blocked each one, only to find myself backing up. The bitch had picked up more moves than I’d anticipated.

I tried a counterattack, but she artfully dodged before going on the offensive again. A couple of slashes got dangerously close. I think one of them nicked my leg.

I have no idea where she picked up all that training. But she was much better than I’d anticipated. I found myself feeling a mixture of alarm and admiration.

I jumped in with a counterthrust, nicking her side. She cursed as she came back at me. I blocked her thrusts, although one came within an inch of doing some real damage.

Our swords clanked for five… ten… fifteen minutes. I have no idea where she found the stamina. The bitch had obviously been training for this moment. I found myself more and more appreciative I’d bothered to take a few private lessons.

“I want your head!” she bellowed as she charged me again. I parried her thrust, returning one of my own. She blocked it just in time or I would have taken a chunk of leg.

She slashed and I jumped back. I looked down, only to see she’d cut through my leotard. It felt like she’s nicked me just under my breasts. Her rage seemed to be fueling her efforts.

“I’ll buy you a new one for your funeral, slut!” Then she charged again.

I parried and deflected the blows, only to become aware that I was tiring. I had no idea how much energy she had and if it was more than enough to finish me. I couldn’t let this go on much longer.

I parried a blow and then proceeded to go on the offensive. We were evenly matched, but I began to attack with greater enthusiasm. Now the bitch had pissed me off.

I got a slash on my right side, but it didn’t feel like it went very deep. I pressed my attack, bringing my sword in again and again. One hard swing and I finally disarmed her, causing her blade to go flying.

She tried to chase it down, but I cut her leg. She tried to weave and dodge but I slashed across her midsection. It left a nasty red line below her tits.

She fell to her knees, gasping for breath. She was just as winded as I was. Then I pointed my sword right at her throat and declared, “Victory is mine, bitch!”

She panted heavily as she looked at me with pure hatred. Then I saw resignation in her features. “Victory is yours, Angelina.” It was the first time she’d ever called me by name.

I wanted to gloat. I wanted to humiliate the bitch. I wanted to slice her up into a thousand pieces. She just lowered her head, offering her neck to me before quietly murmuring, “Take what is rightfully yours.”

“Oh no you don’t, bitch! You’re not getting off that easily. Now I want you to strip.”

“You’ve got to be kidding me!”

“Strip, damn you, or I’ll cut up those tits so bad the coroner will have to attach a pair of new ones for your funeral.”

She glowered at me. But she did as she was told. I finally got to see what Brad must have seen in her when he first married her.

Once more she did as she was told. “You’re loving this, aren’t you? I take it you intend to humiliate me?”

“Wouldn’t you if our roles were reversed?”

“Just get it over with, damn you!”

“Fine. I’ll just start by slicing up that pussy of yours. I see it’s dripping. What’s it matter if you touch it during your last moments on earth?”

“You’re a real sicko; you know that? You and Brad were made for each other.”

She gave me a dirty look. Then she started touching herself. “Do it like you mean it, bitch! I’m sure you’ve been doing it a lot lately since Brad’s been over at my house every damned night.”

She began touching herself until she really got into it. Her breathing became heavier. It was arousing as hell.

I was tempted to let her go all the way. But I was late for the premiere, although it was just down the street. I was about to have a unique accessory that was going to attract a lot of attention.

I waited until she was fully into it. Then I swung with all my might before she could consummate her pleasure. My sword connected with her neck and her head went flying.

I hurriedly dressed for the premiere in a gown I’d planned to wear for the occasion. Then I picked up Jennifer’s severed head. I proudly walked out of the building and down the street.

There was a lot of noise as I approached, people talking as cameras snapped photographs. But as I drew closer everyone shut the hell up when they saw me. There was utter silence as I walked by, proudly carrying the bitch’s dripping head. 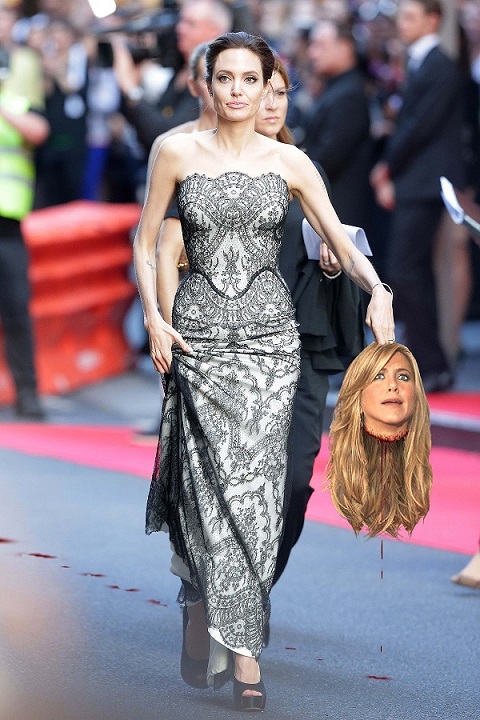 No one dared say a word to me. Now they all knew who they were dealing with. It gave me an immense feeling of power.

As for the stupid bitch I’d just dispatched? The poor thing had a look of indignation on her face, no doubt because I hadn’t allowed her to finish her pleasure. But that’s just the kind of bitch I am.