Melissa closed the door from her carport, and turning inside, stood still for a moment. Too much, she thought. She simply had too much going on.

After a moment, she had gathered her will together and slipped off the jacket of her suit. Draping it over the end of her sofa, she went to look out the window, shoulders tense, a vague ache in her forehead over her eyes, and tension making her hug herself.

The view outside was beautiful, but that didn’t matter. Her attention was inward, not on the sun setting behind the hills to the west, beyond her little swimming pool. The job as director of corporate compliance had been enticing; it was a nine to five position, while friends who had graduated with her were putting in twelve hour days at their law firms. Reviewing policies and procedures, checking what was written with actual practice…it had seemed simple. How much stress could it entail to read dull files, attend daily meetings, and report on the changes that should be made in the policies? How often would a manufacturer of office products deal with the threat of lawsuits?

As it turned out, pretty often. She had reckoned without the internal personnel issues that left bright, competitive managers enraged at capricious firings, indiscreet words from division chiefs drawing civil rights investigations, or mercenary bean counters who would only fund a high school dropout as her administrative assistant. A tearful session with Mike Schiffer, who knew he was about to be fired, had made her stomach churn. Then a confrontation with serial provocateur Ed Lawson, who thought he could bully his way through any situation, had left her trembling with what she recognized was fear after the fact. It had been almost as bad as the confrontation with Jeff Summerall the previous week. They couldn’t prove he was cheating clients. This deprived Melissa of any power in the face of his taunts and veiled threats. He had left, but intimated that he would exact revenge in some unspecified fashion.

Extending one hand out in front of her, Melissa watched it tremble. “God,” she breathed. Abruptly, she moved to the refrigerator where a black cardboard box labelled Pinot Noir dispensed a glass of deep burgundy wine into her coffee mug.

Five minutes later, the cup was empty; and ten minutes later, the refill was also drained. Melissa stared guiltily at the few drops remaining in the bottom. The alcohol was starting to have its effect, though, and by the time the third mug was done, so to was the shaking in her hands and the sense of panic Melissa realized that she had been feeling. The sensation had been like she couldn’t quite get her breath. Taking a book off the shelf next to the sliding glass door to the patio, she kicked off her shoes and seated herself on the sofa to try and read. Five minutes later the sound of her soft snoring could be heard. And was heard by Jeff Summerall, who had been watching and listening in on a nanny-cam he had hidden in Melissa’s home three days previously.

Soon thereafter, he silently let himself in the same way he had entered previously; a master key from a collection he had purchased from a retiring Spanish cat burglar. Inside, he stood and watched Melissa for several minutes. Her snoring deepened, and he smiled as he set his canvas duffel bag down. It was already unzipped, in anticipation of opening it noiselessly.

Carefully withdrawing a set of handcuffs wrapped in paper towels to minimize clinking, he set them on the back of the sofa near where Melissa’s head was slumping on her breast. A clean handkerchief followed, as did a big piece of pre-cut microfoam tape. Lifting the cuffs carefully, Jeff mentally rehearsed the exact moves he would make, and how he would neutralize the reactions his attack would provoke. Standing still over Melissa, he ran through in his head the actions one last time. And he pounced.

When Melissa’s eyes and mouth flew open, Jeff was already straddling her and waiting with the handkerchief folded tightly. When it went into her mouth and she grabbed for it, he was ready; seizing her wrist, he flipped her onto her face with a wristlock any aikido player would have recognized. The cuffs ratcheted shut on her wrists behind her back, the handkerchief was deftly repositioned, and the tape quickly locked it in place while Melissa bucked between his legs.

That done, Jeff paused, resting, his weight holding Melissa down. Thus far, everything had gone according to plan. Pushing himself up, Jeff wiped the sweat off his brow, and realized he had left the duffel out of reach. Oh well, perfection wasn’t possible, he reflected. Grabbing Melissa by an ankle, he dragged her to where the rest of his equipment lay.

Once there, he wrestled with her for a minute to get her onto her face. Then remounting her, he fished into his bag for the cotton sash cord stowed there.

Getting her ankles secured was harder, and he took a bony heel in the face in the process. She had kicked off her pumps before he ever arrived, but he knew he would still have a bruise the next day. Suppressing the urge to pound her face with the side of his fist, he continued working with the cord. At last, soaked with sweat but satisfied, he stood over Melissa while she looked up at him, silent, eyes wide.

”Bitch. I told you there would be hell to pay.” His voice was calm, but the struggle had dried his mouth out, and he had to stop and restate it. She just stared at him.

Leaning over his duffel, he pulled out a hunting knife in its sheath. Unsnapping it and dropping the leather shroud back in his supply bag, he held the knife up to where she could see it. Now Melissa stiffened and whimpered a little.

“Shut the fuck up. I’m not going to cut you. If you cooperate.” He bent down to start cutting away her clothes.

A wail escaped from somewhere inside her, loud despite the gag. “I SAID, SHUT THE FUCK UP!” Jeff grabbed her throat with his left hand, and held the knife in front of her face, too close for Melissa to focus her eyes. She fell silent, though.

A few minutes later Melissa’s clothing formed a pile of rags on the floor. Melissa lay on her side, blinking away tears and catching shuddering breaths. Jeff smiled. “Hell to pay,” he said, as much to himself as Melissa.

Moving to the sliding glass doors, Jeff slid them wide open to the darkening desert vista outside. The desert air had started to cool, but the concrete radiated dry heat. The odor of chlorine from the pool wafted in. Jeff looked outside, and then moving back in, searched out the light switch panel he knew would be somewhere close at hand. A few experimental flips of a switch, and he found the underwater pool lights, leaving the patio floods off.

Moving to Melissa, he asked, “Are you going to help, or will I have to drag you?” She didn’t understand at first, but soon found herself hopping while Jeff stabilized her and steered her outside. Still half-panicked, Melissa looked around, wondering what was going on. Jeff extended a leg and casually shoved Melissa over it, sending her thudding painfully down onto the concrete. He went back inside while Melissa lay on the warm patio, weeping.

When Jeff returned, he was holding a disk Melissa couldn’t make out in the light cast by the pool lights. The house was on an unlit street with no neighbors in half a mile. All Melissa could tell was that the object was plate-sized. He set it down next to her on the concrete, where it settled with a clank. Jeff knelt by her feet, and Melissa watched as he began securing the object to the cords encircling her ankles. Finished, he looked into her face, his grin was just visible. “Ready for a swim?”

Melissa’s eyes darted to the disk. Recognizing the metal barbell plate now, she started to scream. Jeff lifted the plate with one hand, and grabbing the cordage between her ankles, dragged her to the edge of the deep end of the pool. Dropping the plate in the water first, he said only, “Good bye.” A shove, and Melissa followed the plate to the bottom.

Melissa got only part of a breath before the warm pool water slapped her in the face, and then began pressing in on her eardrums. Melissa landed on the pool bottom on her already-bruised ass, but just made a fleeting contact before her buoyancy started to make her drift upwards. She thrashed, trying to get her hands free, but the cuffs were inescapable, and tight wraps of cordage around her upper arms made it impossible to reach the ropes holding her ankles. 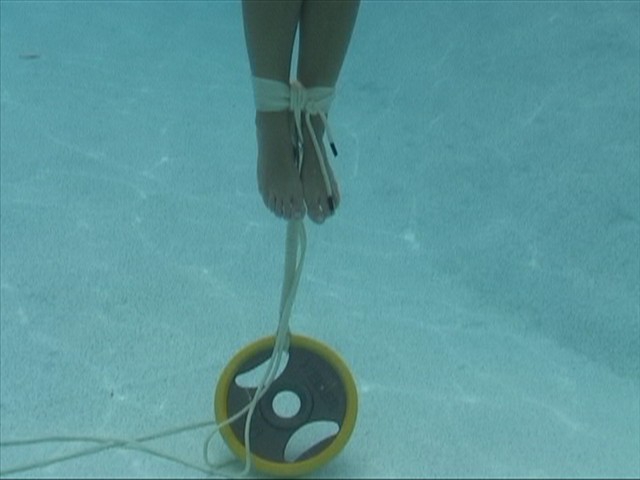 Keeping her eyes open against the sting of the chlorinated water, Melissa looked around desperately for any means of escape. Looking upwards, she could just make out the form of Jeff, standing at poolside, looking down at her.

Terror made her redouble her efforts to tear loose from her restraints, and she began to grow numb as her efforts quickly depleted her oxygen. The urge to breathe in grew stronger, as did the loud pounding of her pulse in her ears. Exhausted and focused on fighting not to inhale, Melissa went still. With the easing of her struggles, the water surface settled a bit, and she could make out Jeff’s smug expression, demonic, lit from beneath by the pool lights in an accurate parody of theatrical ghoul lighting. One more whimper escaped her, and like a slow leak in a car tire, a thin stream of bubbles began to trail upwards from between her lips. The trickle became a flood that roiled the water surface. It cleared just in time for Jeff to watch Melissa open her mouth and gasp a lungful of treated pool water.

Her face changed somehow, the transition from terror to painful agony, guessed. Melissa began thrashing again. It subsided in perhaps ten seconds, and buoyancy gone, Melissa settled down to rest, face up, on the bottom. Her eyes were still open, but her expression had eased. Jeff watched for long minutes to see if he could spot the point at which Melissa’s heart stopped, but disappointingly, nothing seemed to change.

With a bit of a rueful chuckle, he started to turn away, and then stopped to look back one last time. Maybe…

…but no, he could detect no difference in the onetime lawyer’s face. Jeff chuckled, and headed inside to clean up. Just before going, he paused to flip off the pool lights, and wondered if Melissa would have been able to see the stars from where she lay. Probably, he decided, before he left to hike to his car and head home.

This entry was posted in Drowning Stories, Guest author and tagged drowning. Bookmark the permalink.