Allison opened the door, walked into her apartment and sat down at the kitchen table. She started sorting through the mail awaiting her. That’s when she came across a blank envelope.

Concerned, she opened it and pulled out the single folded sheet of paper it contained. These were the words she read:

She sighed. Another assignment. So she quickly reported in and got the location of her target. With a bag of equipment she might need already in her vehicle, she set out.

She parked her vehicle, retrieved her bag and then walked through a set of woods until she came upon a dock she’d previously scoped out. She inflated the tube and set it in the water. Then she set her equipment bag inside the tube. 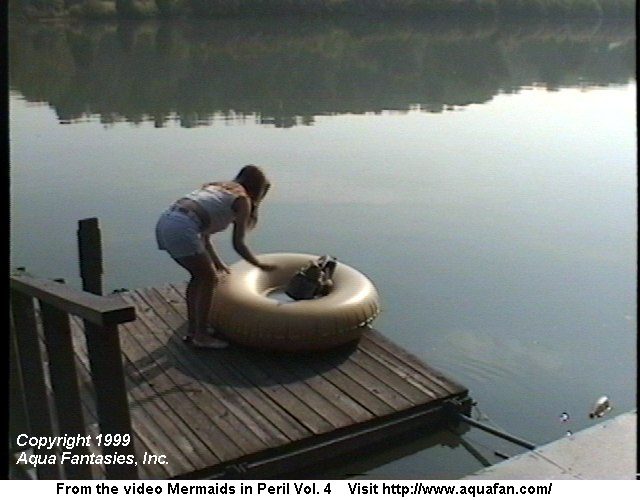 She’d already concluded the safest way to get to the thief’s residence without being seen was to cut through the woods and cross this body of water. That way she could enter through the back yard.  So she sprawled across the tube and started paddling her way across. 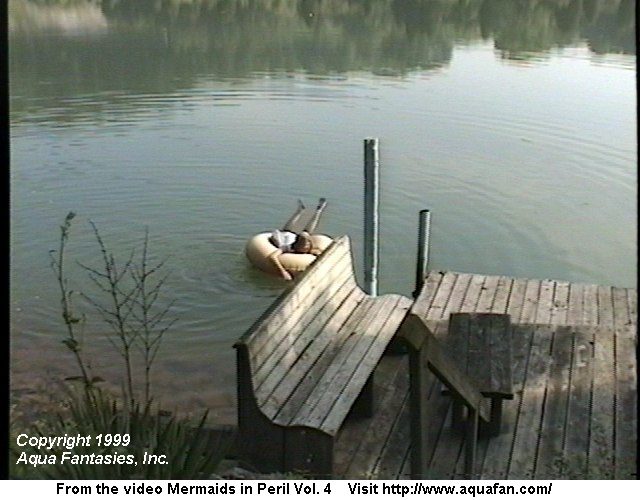 The director had given her this assignment personally, knowing her breath-holding skills. This might be an underwater operation if she couldn’t retrieve the disks right away. If she were successful, Alison believed a promotion might be in the works.

Reaching the dock on the other side, she grabbed her gear and headed into more woods in the direction of the house. The pool should be out back, easy to find and partially obscured. She hoped she could get in and get out with the disks without being observed. 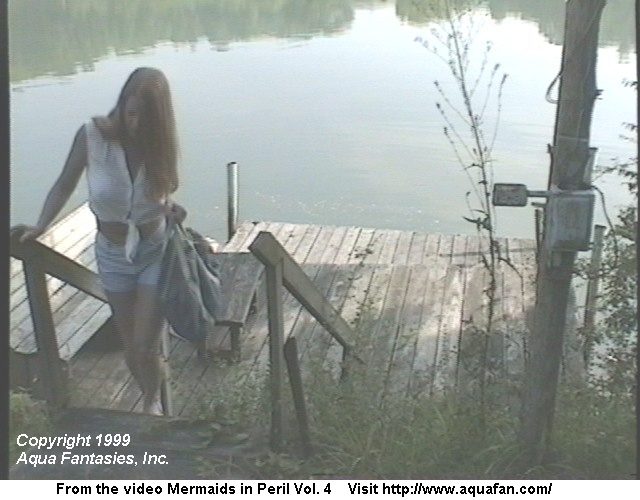 She carefully crossed an open area. She was in pretty good shape. If she did encounter the thief or any guards, she figured she would be able to handle herself without too much trouble so long as there weren’t too many of them. 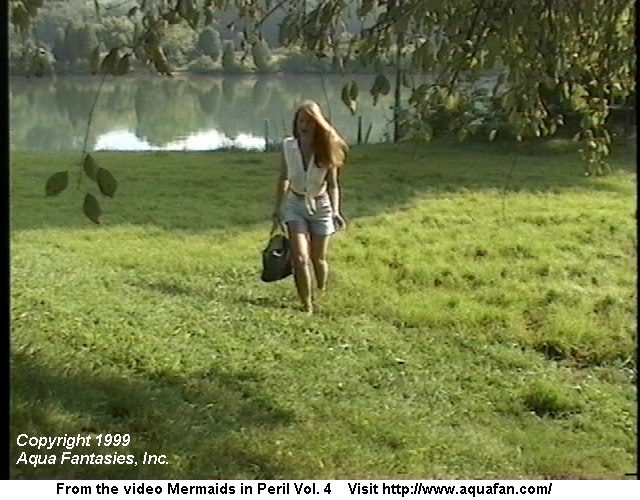 She came up to a fence and peeked around it, immediately discovering the pool. So the information was correct. The disks had to be in the pool. 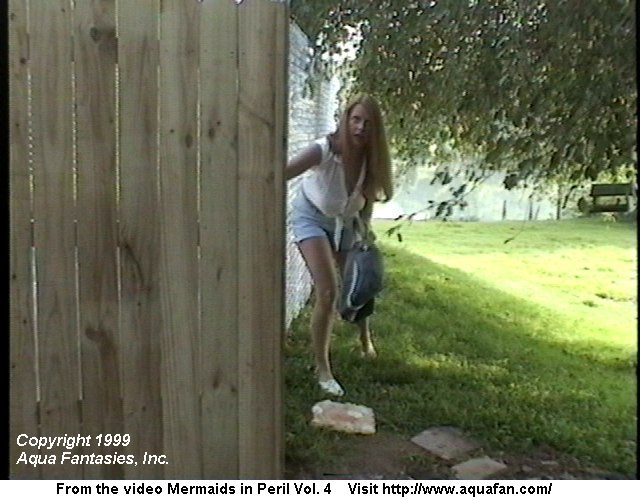 She entered the patio and looked down into the water. That’s when she found a small black bag handcuffed to the bottom of the pool ladder. It was far enough down to where she would have to hold her breath. She was going to get wet on this one.

She pulled off her shorts, not wanting to get them soaked. After all, she figured her panties would dry quickly enough. Besides, she wasn’t planning on hanging out and sunning herself afterwards. 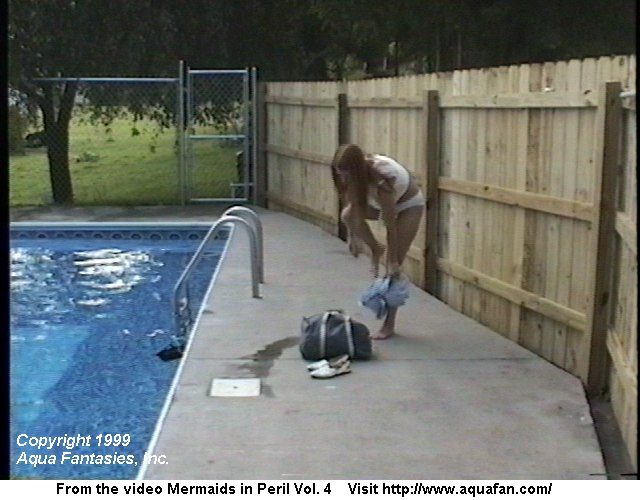 She pulled a weight belt out of her bag and strapped it on. She didn’t want buoyancy to be a hindrance. She also pulled out a length of plastic hose and tied one end to the top of the pool ladder. This way she wouldn’t have to hold her breath. Then she pulled out a lock-picker she’d wisely brought along. 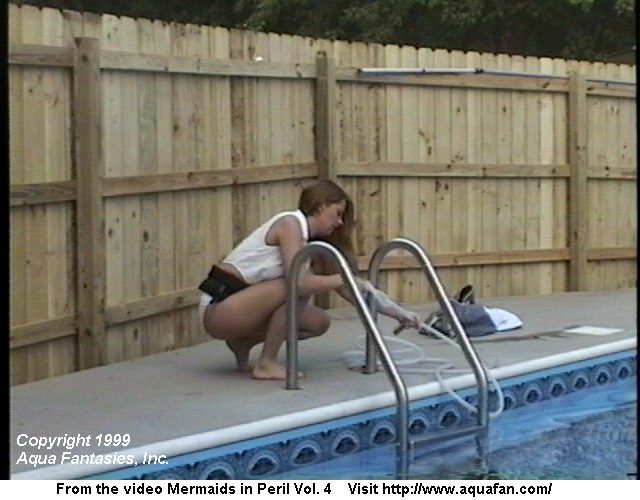 She put the other end of the plastic hose into her mouth. So far so good; she was getting the air she would need. Satisfied she could breathe through the hose, she stepped down into the pool. 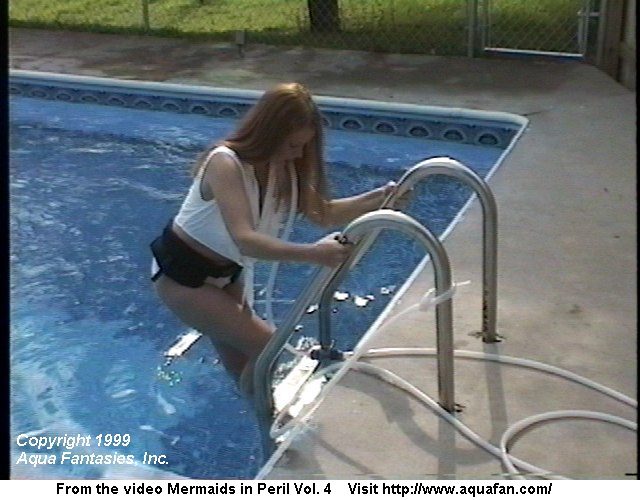 She felt a refreshing chill, although the water was not too cold. It was a good thing she’d brought a weight belt along. She didn’t want to deal with floating up toward the surface while she was in the middle of retrieving the disks in that container. 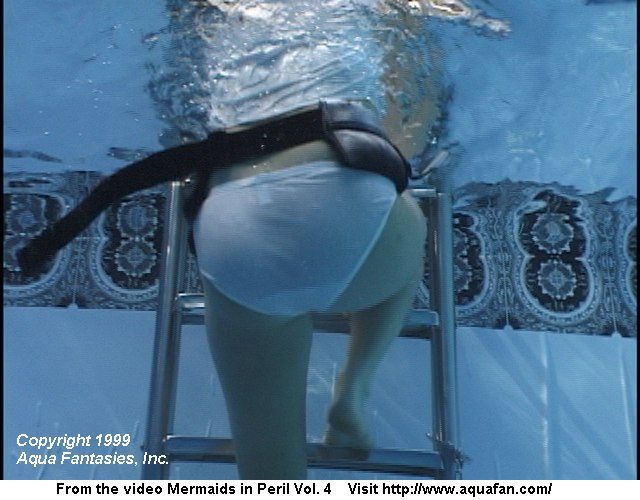 She breathed through the hose as she checked the handcuffs. They looked ordinary enough, something she should be able to open quickly. A minute or two and she should be out of here. Hell, she almost didn’t need the hose, although she was glad she’d brought it along. 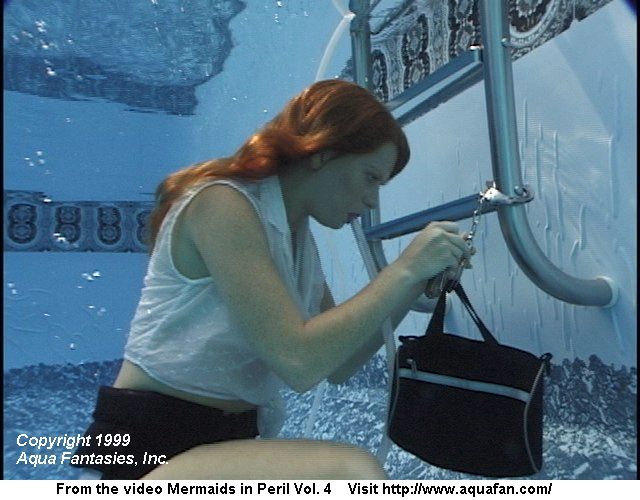 She went to work on the cuff holding the bag. She pried and twisted with her little lock-opening device. But it was proving stubborn. Now she was glad she’d brought the hose along. 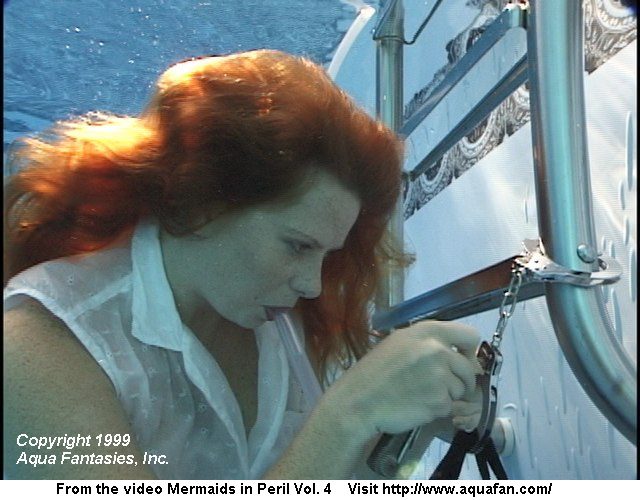 Up at the house, a woman stepped outside to have a look. She felt uneasy, especially with the stolen disks in her possession. She would sure be glad when her boss finally sent someone to take them off her hands. 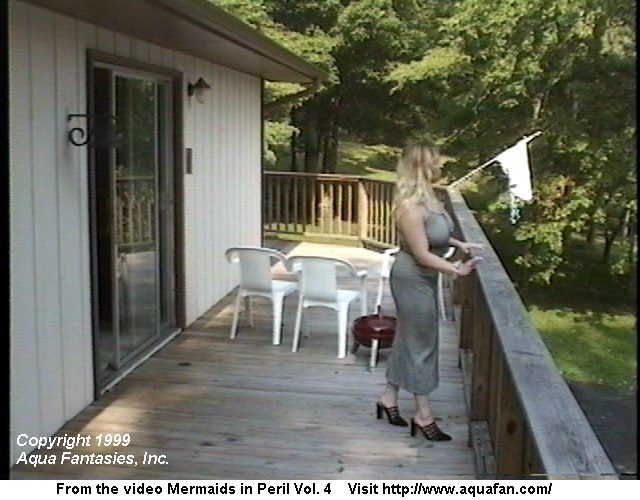 On impulse, she headed down to the pool to check on the disks. Losing them would mean her life. She almost wished she wasn’t the one who had stolen them in the first place.

She peeked around the fence, only to let out a curse under her breath. Lying on the ground were a pair of shorts, a bag, and a plastic hose tied to the pool ladder. A careful check revealed the intruder was still in her pool.

What should she do now? If she went to call someone, the woman might get the disks and disappear. She suspected it would be up to her to deal with the bitch herself.

She walked to the edge and looked down into the water. She saw a slender young woman trying to pick the lock and free the bag. A moment later the cuff opened, allowing the bag to settle onto the pool floor.

That settled it; there was no time to call anyone. She would have to take care of this herself. She slipped out of her heels as she certainly wasn’t going to risk damaging them in chlorinated water. Then she jumped into the pool. 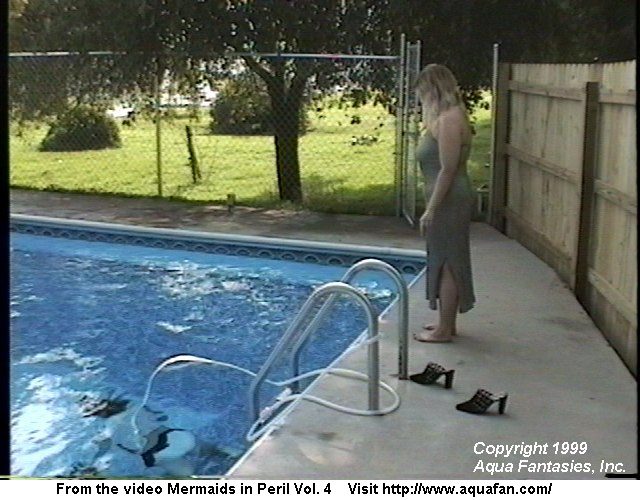 Alison was surprised when the cuff opened. The bag with the disks inside went right to the bottom of the pool. Now all she had to do was pick it up and then get the hell out of here.

She had just picked it up when she heard a splash. Immediately she was attacked by a woman. Was this bitch the thief who had stolen the disks?

There was a struggle underwater. Alison clung to the bag as the woman grappled with her. But she wasn’t about to let the disks out of her possession now. 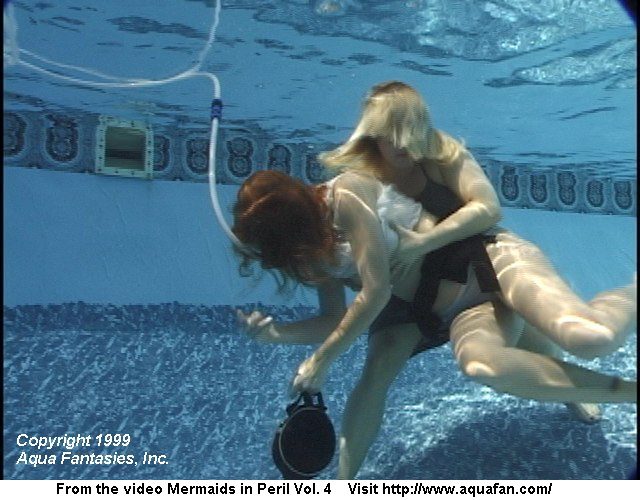 She was so busy trying to hang onto the bag that she didn’t see the woman wrestle her close to the pool ladder. With a swift motion, the woman grabbed an arm and cuffed her wrist. Alison grunted in alarm as she gasped for breath through the plastic hose still in her mouth. 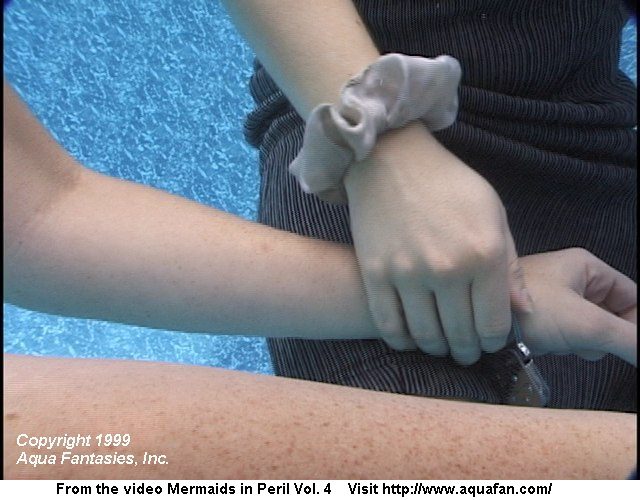 With a hard jerk, the woman pulled the bag out of her hands. Then she climbed up the ladder out of the pool. Alison had lost the bag… and now she was cuffed to the ladder. And she no longer had the lock-picker in her hand! 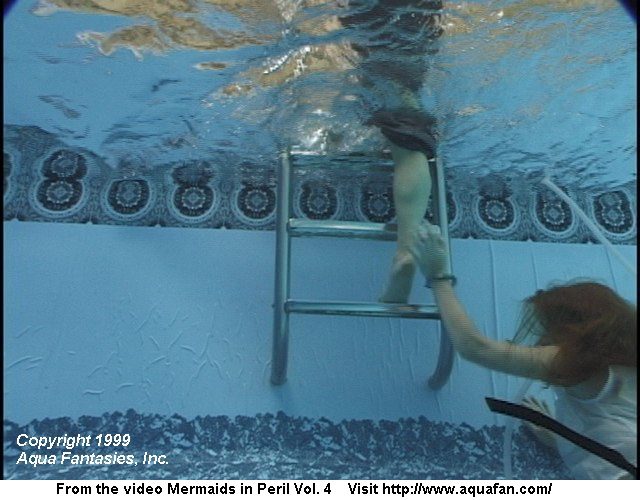 The thief looked down into the water. “This will take care of you,” she said to herself as she pulled on the plastic hose. She pulled it out of the intruder’s mouth and all the way out of the pool so the bitch couldn’t use it to get any air. 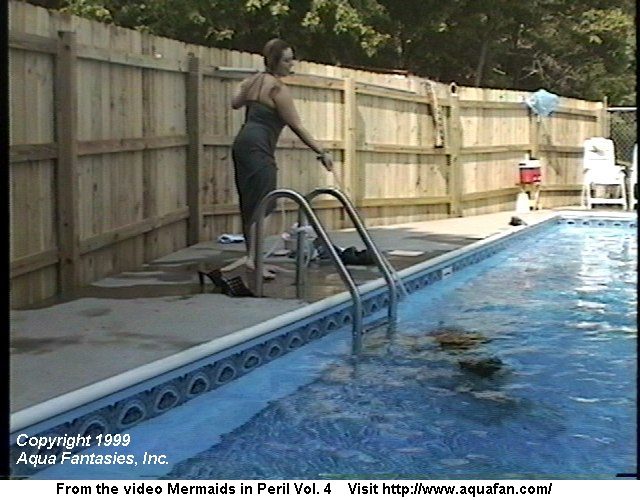 She looked down into the pool, making sure it looked like the intruder wasn’t getting out any time soon. Then she headed back up to the house. She had to place a call asking what they wanted her to do with the body once the bitch drowned in her pool. 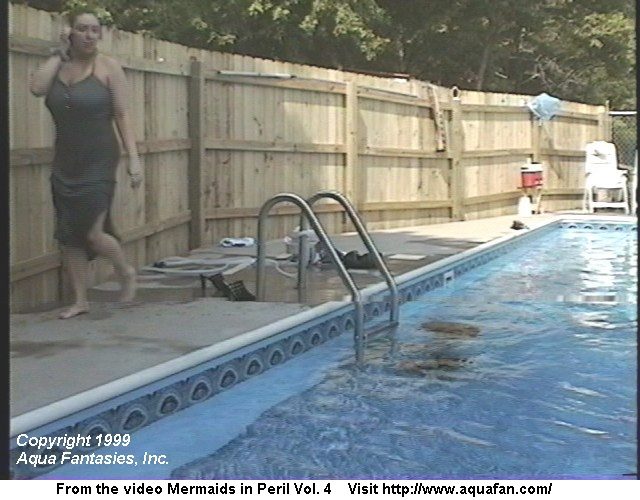 In the span of a few horrific seconds, Allison’s world had been thrown into chaos. One minute she had successfully picked the lock and released the package. Now she was cuffed to the pool ladder after some bitch had caught her by surprise. To make matters worse, she had dropped the lock picker once the bag had come free… and the bitch had pulled her hose up, leaving her with just the air in her lungs!

Alison struggled to free herself from the handcuffs. Without the lock-picker, she might not be able to get the damned thing open! She struggled as she tried to pull her wrist out of the cuff. 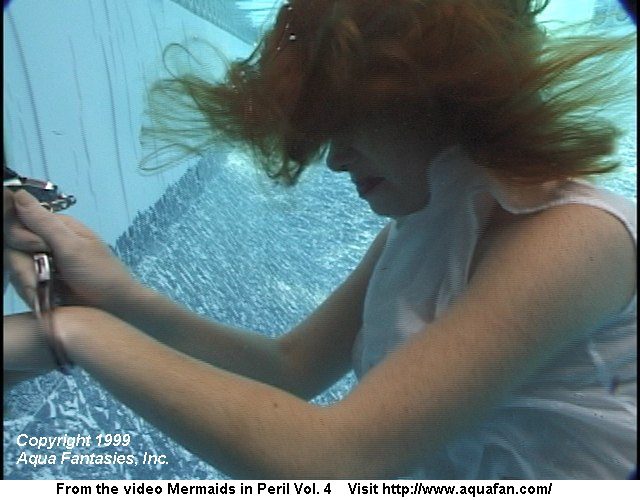 Her lungs were already beginning to burn from the energy she’d used to fight the woman off. She wouldn’t be able to hold her breath much longer! As the urge to breathe became intense, she clamped a hand over her mouth in a frantic attempt to keep from inhaling. 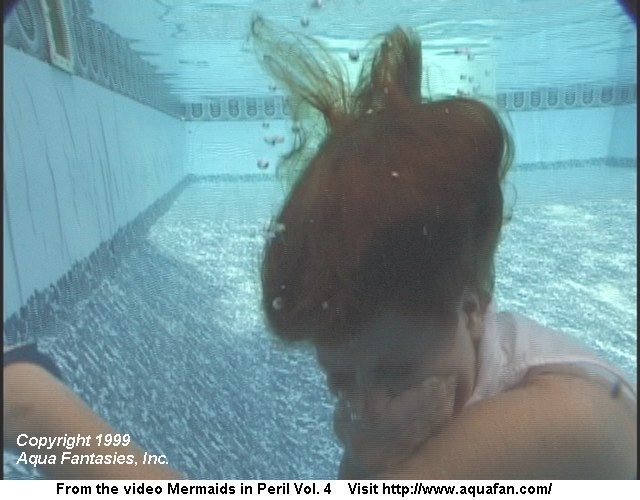 She yanked against the cuff, but she couldn’t get her wrist free. Her lungs heaved, instinctively causing her to plug her nose. Alison knew she was almost out of breath. How had this assignment gone downhill so damned fast?? 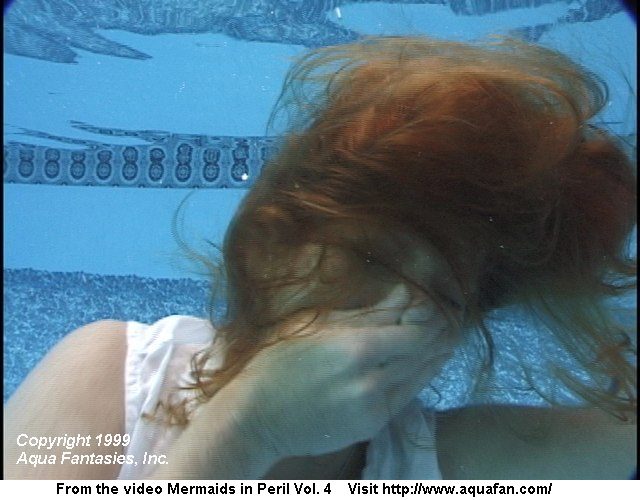 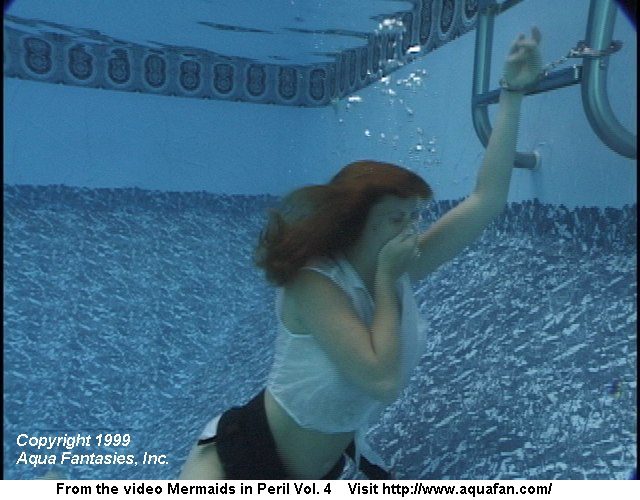 She winced as she strained to hold her breath for as long as she could. But it was just no use. As she covered her mouth and tried to pinch her nose shut, she lost a big burst of air as she convulsed painfully. 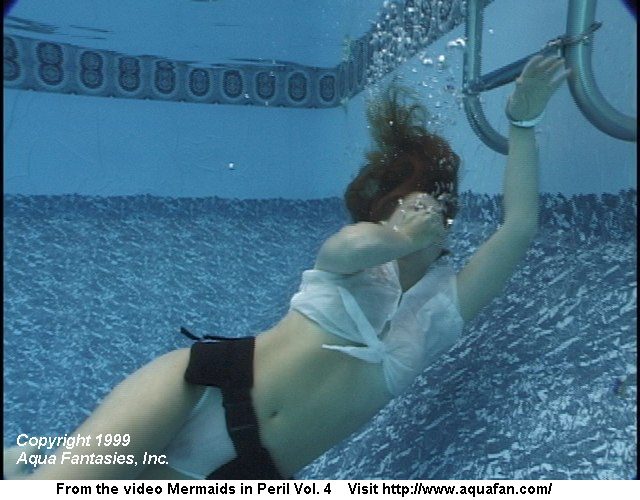 She went into severe convulsions as her body jerked and hitched. She kept swallowing water, only to cough hard before inhaling another mouthful. It hurt like hell until she finally went limp. 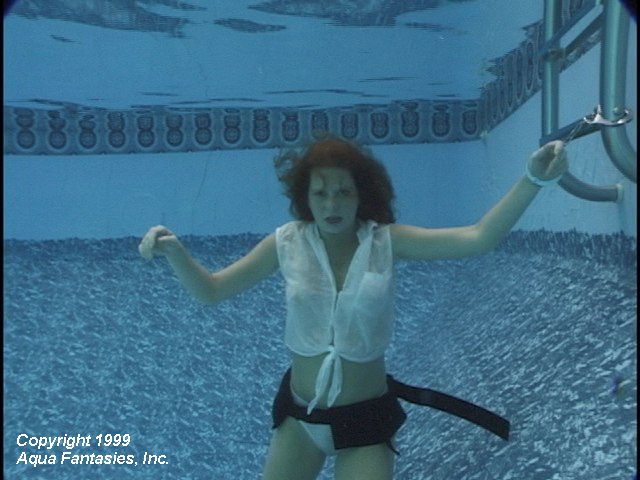 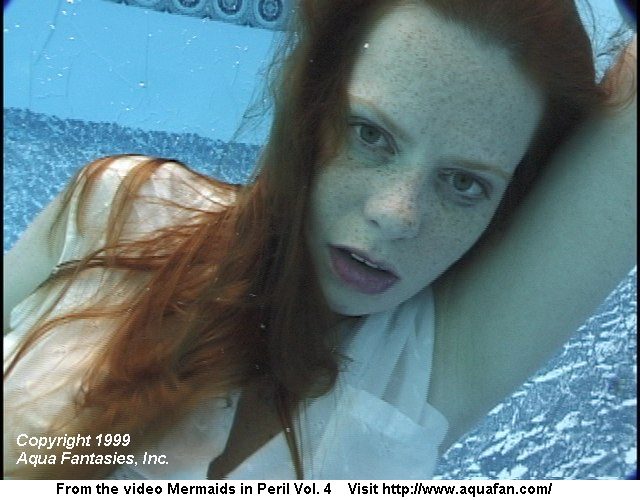 Up at the house, the thief finished her call. They would dispose of the body once they came for the disks. Then she would be out of it.

She went back down and checked her pool. The intruder hadn’t gotten away. She smiled to herself as she headed back to the house, proud of the way she’d taken care of it herself.

(Pictures and story idea are from Aqua fantasies Mermaids in Peril Vol 4. Pictures are used for illustration purposes only.)