They got her on the floor where Scot exposed her massive mammaries.  She was just starting to come around when Brad grabbed her legs… “Shit; she’s waking up! Bag her, Margo!”

Margo quickly wrapped a bag over her head. Terrie began to struggle as Scot groped her tits while rubbing her exposed crotch. “Fuck; this bitch is WET!” he observed. 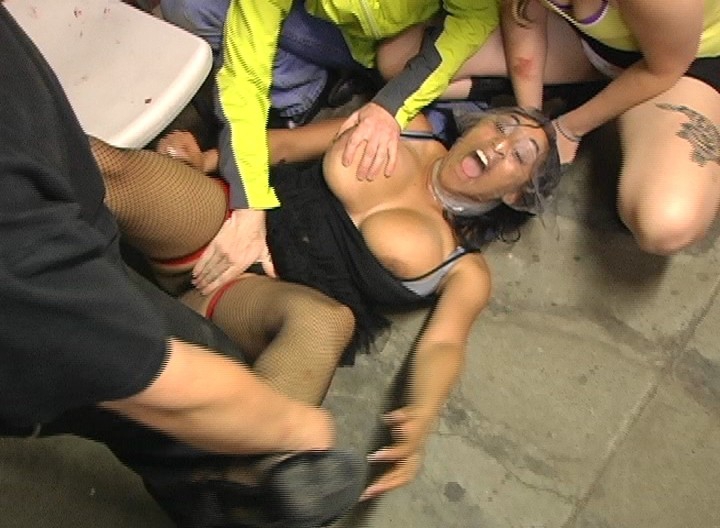 “Hang onto her!” Margo ordered.

“I AM hanging onto her!” Brad replied. “FINISH bagging the bitch already!”

“Hell; this bitch is so fucking wet!” Scot declared as he continued rubbing her crotch. “She must LIKE being bagged!”

Terrie finally stopped struggling, her eyes rolling into the back of her head. “There; she’s gone!” Margo panted, removing the plastic. “Strange how the crazy whore acted like she was enjoying it or something the way she thrashed about like that!”

“Well, I’ve just GOT to have me a piece of that!” Scot gasped, pulling his pants down. “She’s so fucking wet I bet I slide right in!”

Brad pulled down his pants and thrust his hardening member into Terrie’s gaping maw. Meanwhile Scott grabbed her legs, pulled them apart and then thrust into her wet, winking cunt.

Terrie suddenly shuddered, grunting as she tried to breathe with a mouthful of cock. “What the hell??” Scot gasped in astonishment as he continued fucking her. Then Terrie’s arms began to flail.

“Finish her off, Brad!”  Margo cried out as she frantically grabbed onto both wrists.

“Fuck; her cunt is clenching like crazy!” Scot observed.

“How the hell do I finish her off?” Brad wanted to know.

“Plug her mouth with your cock, you stupid sonuvabitch!” Margo hollered in frustration.

“Oh… good idea!” Then he thrust all the way down into her throat.

“Don’t let her breathe, Brad; shove it all the way down! Who the hell cares if it gags her!”

Terrie grunted and gurgled as her eyes started to roll again. “Right there – right there; hold it right there!” Margo encouraged. “Hold it right there, Brad; she’s starting to fade!” Margo really had to hang onto both wrists to keep Terrie from smacking somebody.

Brad kept his cock rammed down Terrie’s throat until she gurgled and went limp again. “Damn, Margo; I though you bagged her last time!”

“I did, Brad; the bitch should have been dead!”

She just came all over my cock!” Scot gasped. “Fuck what a mess!”

“My turn!” Margo declared, finally letting go of the wrists and watching them flop onto the floor. “She should be dead now… so I’m definitely going to use my strap-on on her!”

They finished undressing her lifeless body while Margo undressed and then put on the huge strap-on. Then it was her turn holding Terrie’s legs apart while fucking her good and hard with the monstrous object. Terrie’s body rocked from the thrusts… until her eyes fluttered open and she started to breathe again!

Once more those arms started to come up. Brad had to grab the wrists just in time. “Fuck she’s awake!” Margo cried out angrily. “I thought you cock-choked her, Brad!”

“Strangle the bitch!” Margo told Scot who frantically grabbed Teri’s tank top and quickly wrapped it around her neck.

“Fuck; I came right along with her!” Margo panted, finally pulling out. “Who the hell IS this bitch? She keeps coming back for more; has she been asphyxiated before?”

“She’s all yours now, Brad,” Margo waved tiredly. “Fuck that corpse to your heart’s content!”

Brad took up the position between Terrie’s legs, pulling them apart as he thrust deep inside. “Wet as hell!” he observed. “She must have enjoyed it every bit as much as we are.”

“Kinky whore,” Margo observed, shaking her head in amazement as Brad started his thrusts, making Terrie’s body start to rock all over again. Then to everybody’s amazement she started to stir yet again!

“What the hell??!!” Margo cried out in astonishment. Then she looked accusingly at Scot… “You call that ‘strangling her’??”

“Shit!” and Margo threw herself on top of her from the other end, mashing her boobs in Terrie’s face. “Do I have to do it all myself?”

“You’re the one who fucked up her bagging, honey!”

“Look out; she’s fighting!” Scot observed as Terrie started pummeling Margo with her arms while pulling her hair. Then Margo was pulled down into Terrie’s breasts, on the verge of being smothered herself!

It took him a minute or so but he finally got both wrists and pulled up. Margo’s head came up gasping for breath… “Bitch nearly smothered me with her tits!”

Together the three of them ganged up on Terrie: Brad pounding her pussy hard; Margo trying to breast-smother her; and Scot desperately trying to hold onto her arms to keep her from pulling Margo’s head back down to smother her again. Terrie bucked and shuddered beneath them…

Terrie bucked and shuddered… started to settle… suddenly bucked a couple more times… and then went still beneath her. But Margo kept her tits mashed hard against the bitch’s face. This time she wasn’t taking any chances.

“I thought you said you couldn’t…”

“I CAN’T… not unless they’re dead!” Then Margo climbed off and felt for a pulse in Terrie’s neck.

“Nothing… well I’ll be damned. Brad, I guess you WERE fucking a corpse!”

“Then what the hell was THAT??” Scot wanted to know. Margo shrugged her shoulders, still panting from the ordeal…

“How the hell should I know… death-orgasm maybe? At least the crazy, kinky bitch went out with a bang!”

“I checked for a fuckin’ pulse! There was NOTHING!”

Scot shrugged his shoulders and then changed places with Brad, fucking the corpse until he too filled her cunt with his cream. When he was done and had pulled out Margo was right there waiting with her strap-on…

“This one’s for me, boys… and all the trouble this piece of shit has caused us!” Then she got into position, brutally thrust into the soaked pussy and began pumping Terrie’s corpse hard.

Margo rammed the body like a woman possessed; she was none to gentle. Besides, she was pissed she hadn’t successfully bagged her to begin with. To her utter astonishment Terrie’s body shuddered a little as a spray came out of her cunt.

“Damn!” Scot observed in astonishment as he was dressing. “Did the crazy bitch just have another death-orgasm, Margo? Or was that you?”

“It wasn’t me, although I sure as hell came hard fucking the shit out of her.” Then she pulled out, deciding it was time for them to leave her for the coroner to find and enjoy. Terrie’s corpse would remain on the floor until her body was eventually discovered, having taken forever before finally being asphyxiated to death…

(Picture found on Terrie’s DFN album and used for illustration purposes only.)