Janet didn’t know what the hell had happened!

She remembered lounging around the backyard pool in her yellow bikini when some strange men she didn’t know had shown up at Skip’s place, men she hadn’t seen before. She’d gotten curious and had snuck after them, watching them go into Skip’s big conference room. It seemed odd to her that Skip hadn’t filled her in on what was going on.

She was at the door trying to eavesdrop when someone had come up behind her, wrapping a cloth around her mouth while getting a good grip on her. She thought she’d heard Skips voice in her ear… “I’m really sorry, Janet. I truly wish you hadn’t snooped around trying to listen in on the conversation of my associates.” Then she’d gotten a good whiff of the fumes from the cloth and had passed out.

Now she was alone with Skip on his speedboat being taken out to sea. Her hands were bound behind her back and there was duct tape covering her mouth! But what scared her was the fact that her feet were now encased in cement inside a small metal washbasin!! When had THAT happened???!!!

She tried to cry out… tried to get his attention. But he was tending to the direction he was taking them. The situation was not good and she was scared out of her wits!

He finally slowed the boat down before shutting off the engine. It drifted to a stop where it gently bobbed in the ocean waves. Skip came back to her with a sad smile on his face.

“I’m sorry to have to do this to you, baby,” he said apologetically, “but you weren’t supposed to listen in on that discussion with my associates.”

Janet tried to tell him she hadn’t heard anything. But it came out as nothing more than a muffled grunt. Skip pulled the tape off her mouth and she cried out… “OW!”

“Skip, don’t DO this!” she gasped anxiously. “I didn’t hear NOTHING!”

“Didn’t hear ‘anything’ you mean,” he corrected her as he pulled on the strings to her bikini top. It came right off, revealing nipples that were hard from shock and fright. He paused a moment to admire her.

“Damnit, Skip; you can’t DO this to me… not after all we’ve been through together!!”

“Sorry, Janet. But I just can’t risk it… not after what you’ve heard. Now just let me finish getting you naked. I know how much you like swimming naked.” Then he proceeded to pull the strings to her bikini bottoms. She cried out in alarm when they came free.

“I’m serious as a heart attack, baby,” he said to her. Then somehow he lifted her up onto the side of the boat before swinging the cement basin over the side with her feet firmly encased within. She gasped as she nearly fell over into the water!

“At least you’ll be naked, Janet. You like being naked in the water, remember? Here… let me untie your wrists. That way you’ll be able to finger yourself before you drown. I know how much you enjoy getting off on perilous situations.”

“Bye-bye, Janet. It’s been fun.” Then her arms came free from behind her back!

She tried reaching around in a desperate attempt to grab him. He just pushed hard into her back. She went off the side of the boat with a cry, a cry that was instantly swallowed up by the sea.

He leaned over the side and watched her head straight for the bottom in a trail of bubbles. “There goes my ‘cement mermaid’,” he said with a sigh. “Oh well. It was fun while it lasted.” Then he started up the motor and sped off.

Down she went, wriggling and screaming and bubbling and thrashing about like mad. A moment later she hit the sea bottom with a thud amidst some colorful flora and fauna. She cried out with a gurgle as air spewed out of her nose! 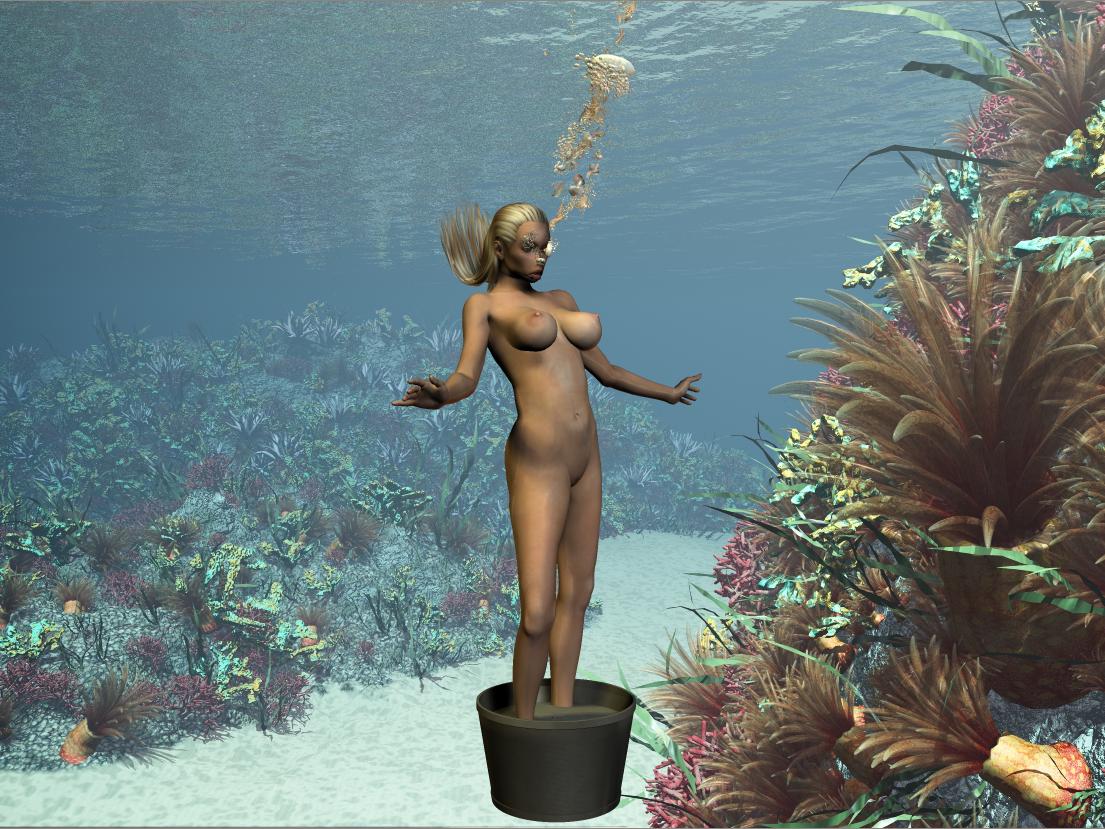 Instinctively she reached down in a frantic attempt to pull her feet out of the bucket. But they were cemented in solid! She wasn’t getting out without a jackhammer!!

Her lungs began to burn and she frantically looked up at the surface. But Skip and the boat were long gone! She was all alone… and she was going to drown!!

As panic quickly set in she found herself wondering how long she could hold her breath. But what did it matter?? A minute fifty or two ten would make very little difference. She was going to drown either way!!

She felt those breathless heaves start in her tummy, working themselves up until she could feel them in her chest. Her breasts began to bounce and her nipples got even harder. She could feel an orgasm swelling inside her, one that would steal away what little breath she had left!!

Again… what would it matter??!! She was still going to drown!! Her lungs heaved painfully as it ominously swelled inside her!

She suddenly felt it rush her… an orgasm of what felt like mammoth proportions. She tried frantically jerking her legs out of the cement but it was a no-go. Then her lungs heaved painfully, nearly doubling her over in a convulsive fit. She plunged her fingers into her wet snatch without even thinking… and then screamed her breath away as it hit like a tsunami.

Janet stiffened and then shuddered as her lungs opened up. Water flowed down her windpipe and she coughed and gurgled. The orgasm intensified into a fireball, battering her senseless with a hot wave of incredible pleasure.

She kept spasming and convulsing as wave after wave of sexual bliss rolled over her. Then she relaxed as the fight slowly ebbed out of her body. Her arms drifted upward without her consent as though she was signaling for a touchdown!

Janet swayed softly in the ocean current, her eyes glazed over in shock and pleasure. Her nipples protruded out of her chest, her mouth open from her last attempt to scream. It had been the hardest orgasm of her existence!!

She wasn’t sure how long she swayed naked like that. The next thing she knew there was a diver in the water with her, checking her out in stunned surprise!! He was dressed in a black wetsuit and he seemed to be looking her up and down. 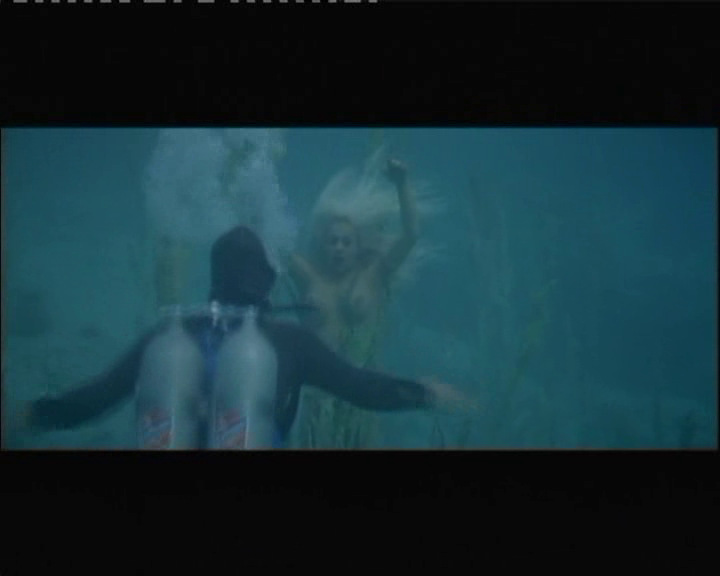 She tried to speak but her mouth wouldn’t function. She tried to tell him telepathically that her beloved Skip had done this to her. He just kept swimming around her, appearing to wonder how she’d gotten there as he admired her nude body.

All of the sudden a shark swam by! It was dangerously close and she tried to scream. Then another swam by! She saw the diver try to push one out of the way. But all she could think of was she was about to become a meal!!! 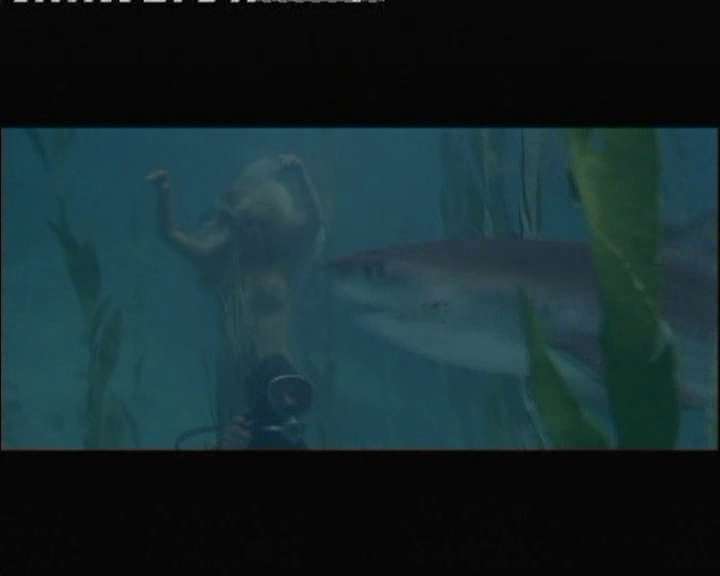 Janet awoke with a start, panting heavily for breath. She was sitting on the couch in front of the TV watching what looked like the next Sinatra movie, this one with Dean Martin in it. Unfortunately she had messed herself again; her pants were soaking wet.

She blushed in humiliation and then got up from the couch. She rushed off to the bathroom to clean herself up. That’s when Skip came into the living room looking for her.

Something smelled familiar and he gave the couch a good sniff. Then his eyes rolled… “Gawd; not again??!!”

“I’m in the bathroom, Skip!!” she called out. “You wouldn’t belief it! It’s Sinatra week on the movie channel and I was watching Lady in Cement and I fell asleep and… well… you simply won’t believe the dream I had!!!”

“Oh, I can believe it all right,” he muttered to himself, shaking his head as he smiled wryly…

(Poser render provided by Skip. It and the vidcaps are for illustration purposes only.)

This entry was posted in Drowning Stories and tagged drowning, nudity, pictures. Bookmark the permalink.